The Cool Spring Downtown District Inc. is a charitable, nonprofit corporation formed in 2017 to create and sustain an arts and entertainment district located in downtown Fayetteville, North Carolina, as a vibrant center of artistic, cultural, civic, and commercial activity.  The Cool Spring Downtown District itself—Fayetteville’s growing destination for art and entertainment—is a 0.55 square mile district in the central core of the city.  The District hosts over 100 businesses and award-winning restaurants, nationally renowned museums, a growing residential population, over $150 million in public/private investment in two years, and is being considered for the region’s newest performing arts center, a likely investment of over $40 million.  The District is also home to the Fayetteville Woodpeckers, a Class A Advanced minor league affiliate of the Houston Astros, who play in their $38 million ballpark opening April 18, 2019.

VISION – We envision the district as
• a vibrant center of artistic, cultural, civic and commercial
activity;
• a place where people live, work, frequently visit and loyally
patronize;
• a robust generator of economic prosperity for all residents
of Fayetteville and Cumberland County.

MISSION – To create and sustain an arts and entertainment
district emanating from the central core of the city.

The Cool Spring Downtown District is supported through generous funding provided by the City of Fayetteville and the Arts Council of Fayetteville/ Cumberland County.

Fayetteville, the sixth largest city in North Carolina, has over 208,000 citizens with over 380,000 in the greater metropolitan region.  Proud of its rich role in the nation’s history, Fayetteville holds fast to the friendly feel of a true hometown while providing the cultural and entertainment amenities of bigger cities.  Fayetteville boasts sophisticated restaurants, museums, musical and sporting events, and nearby Fort Bragg—the world’s largest military installation—that solidifies the city’s deep roots in all things military.

We encourage you to review the Plan of Work carefully and see the many goals and objectives the Cool Spring Downtown District has planned for the 2018-2019 fiscal year. The Board of Directors has prioritized our goals in five main areas – Marketing, Design, Economic Development, Programming and Community. Each Goal has multiple objectives and dozens of tasks planned – each of which will help us position the Cool Spring Downtown District for incredible success! 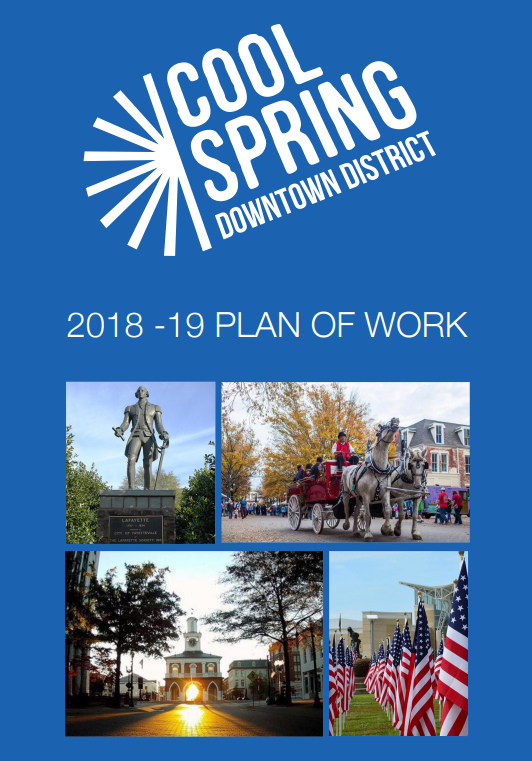