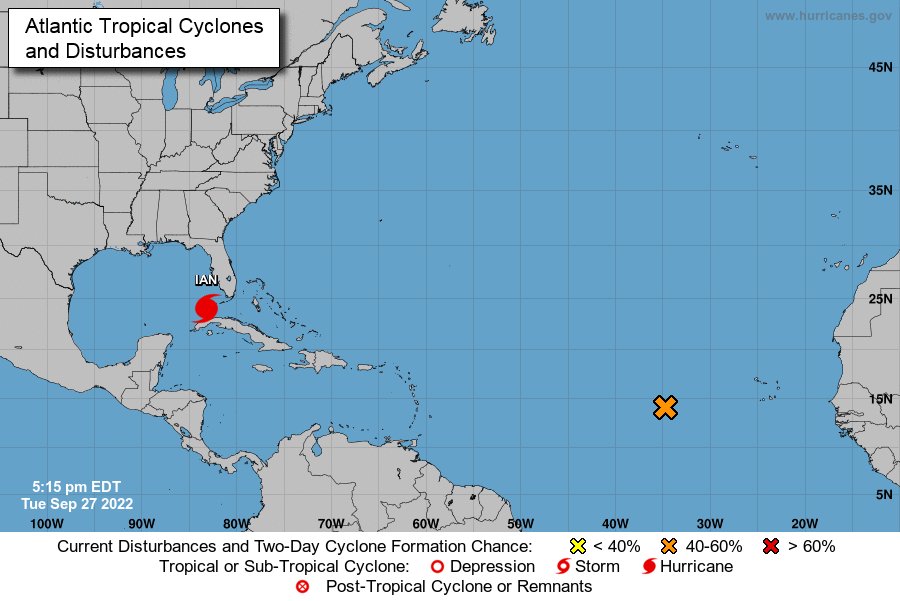 The city of Fayetteville and Cumberland County are monitoring weather conditions related to Hurricane Ian, which the National Hurricane Center reported to be a major Category 3 storm on Tuesday that was expected to strengthen as it approaches Florida.

The hurricane, which on Tuesday was in the southeastern Gulf of Mexico, was moving northward toward Florida at 10 mph and growing stronger, the National Hurricane Center said in its 2 p.m. update.

Forecasters have said Ian could potentially strengthen into a Category 4 hurricane.

It is expected to make landfall on the west coast of Florida late Wednesday or Thursday morning as a Category 2 or 3 storm, the Hurricane Center said.

“The forecast still has some degree of uncertainty for our area,” Jodi Phelps, spokeswoman for the city, said Tuesday afternoon. “The city leaders are monitoring closely, and we’ll continue to monitor the storm.”

“They are based on what they see and staying in touch with the state,” Haney said. “Obviously, we’re continuing to monitor the conditions and projections. They’re keeping us informed.”

James Danco, a meteorologist with the Raleigh office of the National Weather Service, said late Tuesday afternoon that the biggest concern for the Fayetteville area will be flooding rains from a swollen Ian.

“We’re expecting generally about 3 to 7 inches across the area,” Danco said. “And while it has been very dry lately, we think that most rivers should be able to handle at least those lower totals. We are concerned about some minor river flooding, and we’re not expecting any major or moderate flooding.

“But there is a risk for some minor flooding and smaller flash flooding in some urban areas,” he said.

The hurricane poses a minimal wind threat in this area, Danco said.

“It looks like the storm will be slowing down and over land for a while,” he said. “It will be significantly weaker by the time it gets here. Wind gusts up to 40 mph are possible.”

Friday and Saturday could bring a small risk of isolated tornadoes, according to Danco.

He said the worst of the storm for Fayetteville will probably come Friday night into Saturday.

“If you can stay off the road, that would certainly be advised,” he added.

“We reviewed our response plan in early September knowing we are at the height of storm season and in light of recent staff changes,” Justice-Hinson said in an email. “We are closely monitoring Ian. While we don’t expect high winds, we know from experience that heavy rainfall can still cause trees to fall and cause outages, and we know that flooding can wash out roads, causing water main breaks.”

Some areas that get extra attention in PWC’s storm plan include the sewer lift stations that are typically located in low-lying areas and susceptible to flooding, Justice-Hinson said.

“We are currently doing storm prep of all facilities, vehicles, equipment and fuel,” she said. “We have placed additional crews, staff and customer service on call through the weekend. We have already been contacted about sending crews for mutual-aid assistance to Florida.”

Justice-Hinson said PWC customers should always be prepared for potential outages, especially anyone who depends on electricity for medical equipment or have elderly and infant family members.

“Be sure to have plans for backup power, a place to relocate and supplies to meet any special needs of you and your family,” she advised.

Asked if city emergency officials are anticipating a major blow for Fayetteville, Phelps said, “I don’t think anybody here is a weatherman. We’re reading the National Weather Service and responding and reacting to that, whatever the impacts are. That is what we do routinely when there is a storm that could impact the area.”

Phelps urged residents to go online to readync.gov for information on storm preparations and to fayettevillenc.gov/flood for the city’s flood awareness page.

“We’re always trying to be ready or prepared to have a plan,” she said. “If you don’t need it, that’s not a problem.”

Meanwhile, she said, the Fayetteville Fire Department is implementing its preparedness measures, which include checking and cleaning area roads for storm-drain debris.

The city's Engineering and Construction Management teams are securing all active construction sites, Phelps said, and stormwater inspectors are checking city-maintained stormwater control systems for proper functioning. Streets and traffic crews are cleaning catch basins and encouraging residents to do the same for any basins around their homes.

The National Weather Service emphasized that a lot of uncertainty remains about the storm’s path and intensity.

“Once we get beyond Friday,” Danco said, “definitely stay tuned. The forecast will change somewhat. Regarding the tornado threat, that is a concern. It’s relatively small, but there is still a risk there.

“And there is a chance, even with wind gusts up to 40, that could be enough to blow down some weakened trees, particularly with the wet ground, and we can’t rule out power outages.”

The Fayetteville Area Convention & Visitors Bureau, area hotels and other businesses in Cumberland County are preparing to help support anyone who is displaced by the storm, including those traveling north on Interstate 95, the bureau said in a news release.

"A unique microsite has been established with emergency management contacts and resources as well as hotel availability,” the news release said. “The site provides a list of hotels in the Fayetteville area as well as their room availability. This list will be updated frequently each day throughout the week.”

For updates and resources, go to Hurricane Information (visitfayettevillenc.com).