Nathan’s Auto Repair, which was owned by Nathan Page and his wife, Cindy, for 41 years is under new ownership 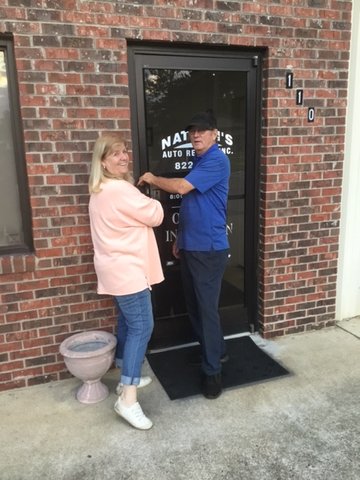 Cindy and Nathan Page lock the door to Nathan’s Auto Repair on Sept. 15 after 41 years.
Contributed photo by Ron Crist 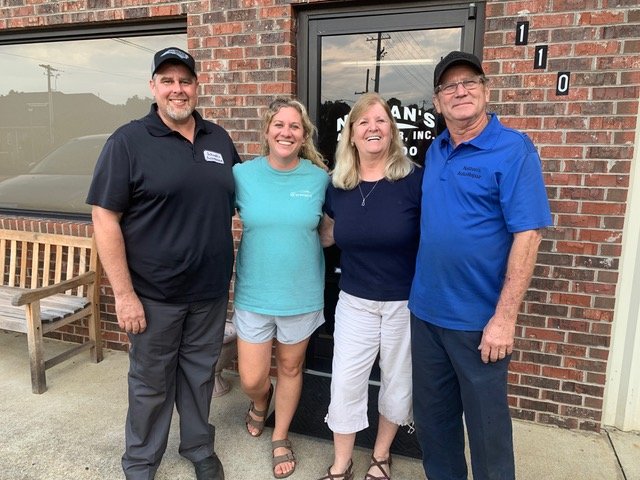 We’ve been very successful and very blessed with some incredibly good customers.”
Nathan Page who owned Nathan’s Auto Repair with his wife, Cindy, for 41 years.
By Bill Kirby Jr. | Columnist

Another business day was done at Nathan’s Auto Repair alongside Carvers Falls Road, just off of Ramsey Street in north Fayetteville.

But this Sept. 15 afternoon would be different for Nathan and Cindy Page, as this would be their last day in the automotive repair business after 41 years.

“It was emotional,” Nathan Page, 67, says. “You were happy for what was coming and sad for what you were leaving behind.”

He admits to being misty-eyed, and his wife, Cindy, had tears in her eyes.

“It was overwhelming knowing how many friendships you had made,” Cindy Page, 67, says. “Customers had become more than just a car.”

But, Nathan and Cindy Page will tell you, there just comes a time when retirement calls. They have been married just shy of 49 years, meeting in English class when they were students at Pine Forest High School. They were sitting in their north Fayetteville home sunroom when the decision to sell the automotive repair business became a reality for the couple.

“It was a combination between the two of us.” Nathan Page says.

“I’ve seen a lot of people who had no health to do anything after they retired,” he says. “So, we hoped we could beat those odds while we still had our health.”

Cindy Page explains the decision, too.

“Nathan has lost two friends,” she says. “Both were customers. It was like ice water to him, and he said it was time.”

Spending time with family weighed in the decision.

Nathan and Cindy Page, too, are building a home on Lake Tillery in Montgomery County, where they like being on the lake and fishing. Nathan Page says he likes a round of golf, although he’ll tell you his game can be suspect at best. And the couple is looking forward to a return to Hawaii to celebrate their 50th wedding anniversary.

You can’t do all of that when a business is open from 8 a.m. to 6 p.m. Monday through Thursday and 8 a.m. to 5 p.m. each Friday, where Nathan Page spent his time under hoods trying to solve mechanical issues and Cindy Page worked as the office manager and bookkeeper.

Customers, employees first or no sale

So, yes, Nathan and Cindy Page say it was time to sell.

But the couple wouldn’t sell to just anybody.

It had to be someone who would assure them that the new owner would treat customers fairly and honestly, and someone who would protect the jobs of dedicated employees including Billy Page, who is Nathan Page’s younger brother and who has worked at the business as a technician for 35 years; Hilly Crist, the secretary and receptionist who has been with the business 23 years; and Jason Serfass, an automotive technician who has worked with the business the past 10 years.

And those employees, including Jeff Ohl, an automotive technician, who after 22 years is heading into retirement, too.

“This is an example of how much they care and love the community and the people they have served,” says Kathy Keefe Jensen, the Fayetteville city councilwoman who represents District 1 in north Fayetteville. “I always say the greatest asset we have is our people. Nathan and Cindy Page are the greatest example of that.”

‘He built a good reputation’

Brian and Andrea Schwab are the new owners of the automobile repair shop at 110 Carvers Falls Road.

They have promises to keep to Nathan and Cindy Page, three generations of customers numbering more than 20,000, and employees at Nathan’s Auto Repair.

“It was important to take care of the people where we are,” Nathan Page says. “We didn’t do this by ourselves. It was the customer base and the employees.”

The Schwabs own a muffler shop nearby, and Nathan Page says he liked how Brian Schwab treated customers.

“The customers we had to send there were pleased,” Nathan Page says. “We watched how he ran his business, and we thought it would be a good fit for how our customers would be treated. It was his demeanor and personality and how he interacted with his customers. He said he thought he could do it. He came and talked with all our employees before we signed anything.”

Brian Schwab says he will live up to his promise.

“We are keeping everything here and changing nothing,” says Schwab, 42, and a 1999 Pine Forest High School graduate. “He built a good reputation over these years and I’m going to be trying to keep it going.”

His wife, Andrea, 38, will work as office manager.

The new owners will change the name of the business to Schwab’s Auto Repair.

Although Nathan Page has turned over the keys to the office and the automotive bays to the business, he continues to assist Brian Schwab with the transition. But retirement years are ahead for Nathan and Cindy Page. They have family to see, a home on Lake Tillery under construction and travels ahead.

As for Brian Schwab, he has promises to keep.