'We knew we could conquer the world,' says Linda Lockamy 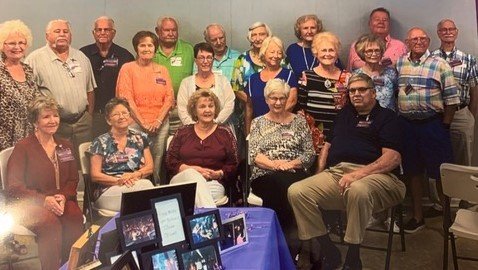 When they were teenagers growing up in Hope Mills, they could travel almost anywhere just by taking Cameron, Legion and Hope Mills roads or U.S. 301. But the roadways that took members of the Hope Mills High School Class of 1967 on their life journey always had a return destination.

“The roads that took us everywhere,” Linda Swanson Lockamy says, “have brought us back together.”

The class celebrated its 11th reunion celebrating its graduation 55 years ago on the first weekend in June. They gathered June 3 for a Fayetteville Woodpeckers minor league baseball game and on June 4, for a lunch get-together and a walk down Trade Street, or what Lockamy likes to call “memory lane.” The reunion concluded June 5 at Paradise Acres.

The old school now is Hope Mills Middle School, but it remains dear to their hearts.

“Hope Mills was a small high school,” Lockamy says of the Class of ’67, which was 102 seniors strong. “We were family. Twenty-eight of those happy graduates had the privilege of attending grades one through 12 on that one campus. This group of 28 refers to one another as ‘forever friends,’ friends since the age of 5 and 6. In June 1967, 102 young people received their high school diplomas from Mr. E.F. Hubbard, the principal. We knew we could conquer the world.”

Alan Nobles was the class president. Jennie Edwards was class vice president. Carolyn Richard was the secretary. Larry Childers and Chris Croft were cheerleaders. Among seniors noted as superlatives were Jean Koonce, who was “Most Inspirational”; Raymond McLemore, “Classiest”; Carol McGee, “Most Creative”; and Laura Cope, “Most Dependable.”

School and being with classmates, Cope-McIntosh says, was important.

“As a child, I had good health,” she says. “I didn’t get the flu or get sick. My parents were good parents and made sure I attended school. I enjoyed school and being with my friends. It just happened year after year. It was just important to me. Like I said, I grew up with good parents and in a good home.”

She hasn’t missed a class reunion, either, and there have been 11.

“We have a reunion every five years,” Cope-McIntosh says. “I’ve been able to attend every reunion. I get to see my classmates. I keep in touch with some of them. Our class was very close.”

And the latest reunion, she says, was one of the best.

“It was a great reunion,” Cope-McIntosh says. “Everybody said the planning committee did a wonderful job. And I’m looking forward to the next reunion in five years.”

Eighteen classmates were on hand for the reunion and two of their teachers.

“We are indeed lucky to have had two of our teachers with us this year,” Lockamy says. “Coach Doug Watts came from Southport with his yearbook and athletic program in hand. He enjoyed reminiscing with one of the outstanding football players from our class, Maxie Carter. Mrs. Sybil West, our typing teacher, was present and shared some sweet memories with us. I like to refer to both Coach Watts and Mrs. West as ‘teachers who became friends to us.’ Again, our class was so lucky.”

And fortunate, Lockamy says, to have had the late Susan Deal McLamb as their senior class English teacher.

“She was our toughest teacher,” Lockamy says. “She prepared us for life beyond high school when it came to the written word.”

“The first I’ve missed,” says Nobles, who after graduation attended Elon University and played football before joining the National Guard and the Fayetteville Fire Department. “We were just a community of families. All of us had our little groups, but when we got together, we enjoyed being together.”

“We are salt of the earth.”

The Class of 1967 grew up in something of a time of innocence.

“Our class has always been closer than classes before and after ours,” Lockamy says. “But I imagine each class feels that way. We did not grow into doctors, lawyers or politicians. We are the ‘salt of the earth.’ Teachers, firemen, truck drivers, telephone men and women, teachers, nurses, and veterans. Of the 33 male graduates, 10 joined various branches of the military. We are indeed proud of our veterans.”

Twenty-five classmates have passed away.

“At each reunion, we have an ‘in memory’ table set up honoring our now 25 deceased members,” she says.

They always will be a part of the Hope Mills High Class of ’67 and those days of yesteryear, when they were kids hanging out at the old Torch drive-in restaurant on Raeford Road and never-to-forget summers at Hope Mills Lake.

“We were lucky also to have the pond,” Lockamy says. “Many hours were spent parked in our cars across from that body of water. We can tell generations to come that we have lived through that water evolving from ‘the pond,’ ‘the lake,’ ‘the stream’ with the breaching of the dam and now back to ‘the lake.’ We will tell our grands how we have seen the vegetation that grows in that water and that had we broken through the roped-off area, we could have walked across.”

Lockamy and her classmates cherish being a part of Hope Mills High School in 1967. They treasure the days growing up with one another then and every reunion since.

“Hope Mills was small compared to Seventy-First High, but large compared to the old Gray’s Creek High,” Lockamy says. “But absolutely perfect for us that call it home to this day.”