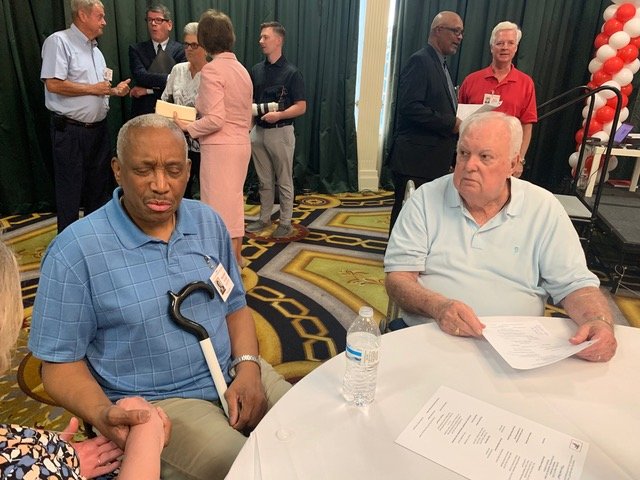 Marshall Lovett and Danny Roberts at the Seventy-First High School 1972 and 1971 class reunion, where Lovett was inducted into the Campbell University Athletics Hall of Fame.
Photo by Bill Kirby Jr. 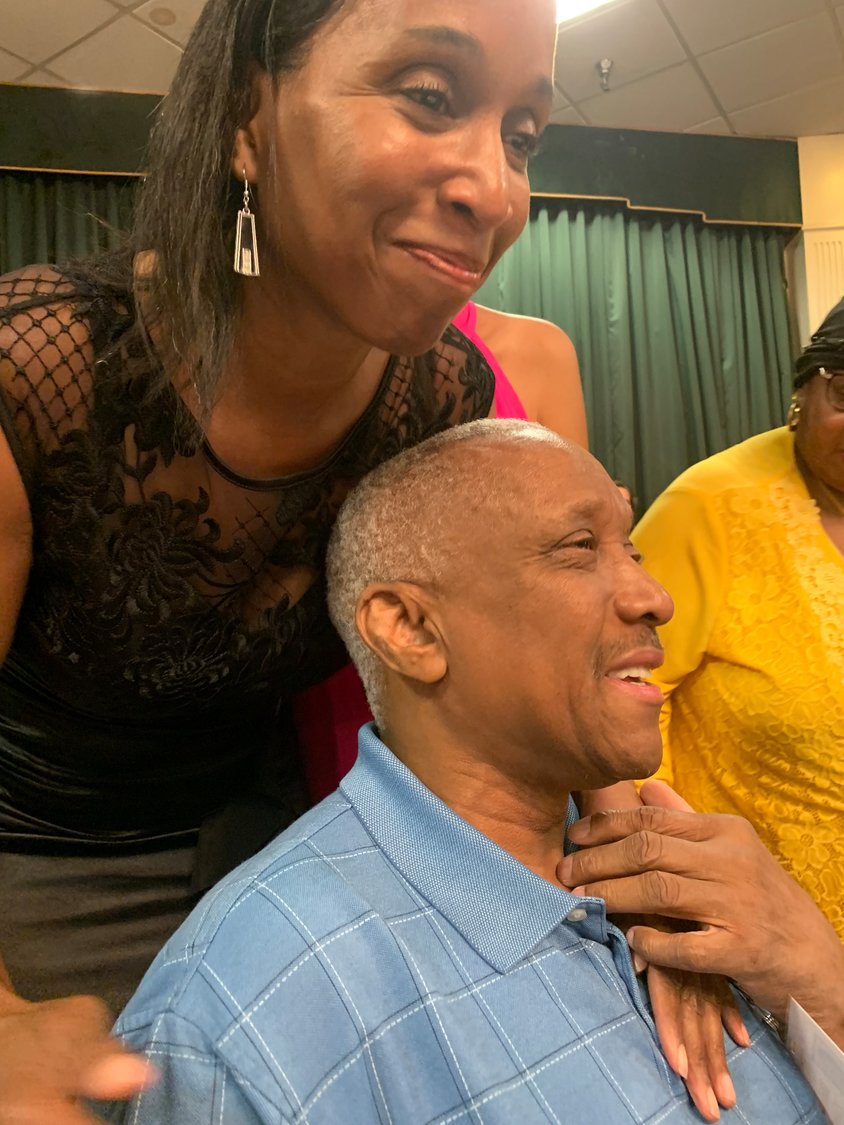 Robin Fortner with her uncle, Marshall Lovett, who was inducted into the Campbell University Athletics Hall of Fame on Saturday night.
Photo by Bill Kirby Jr. 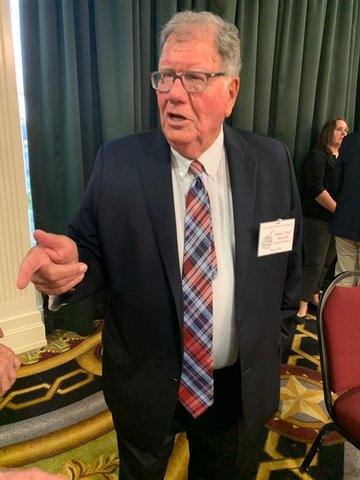 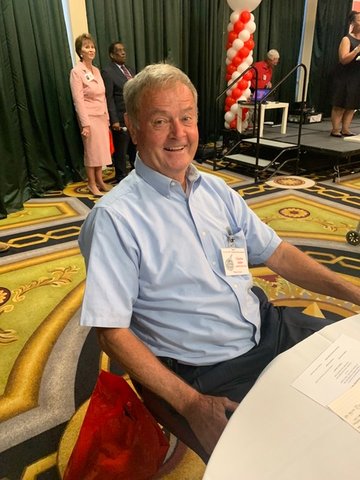 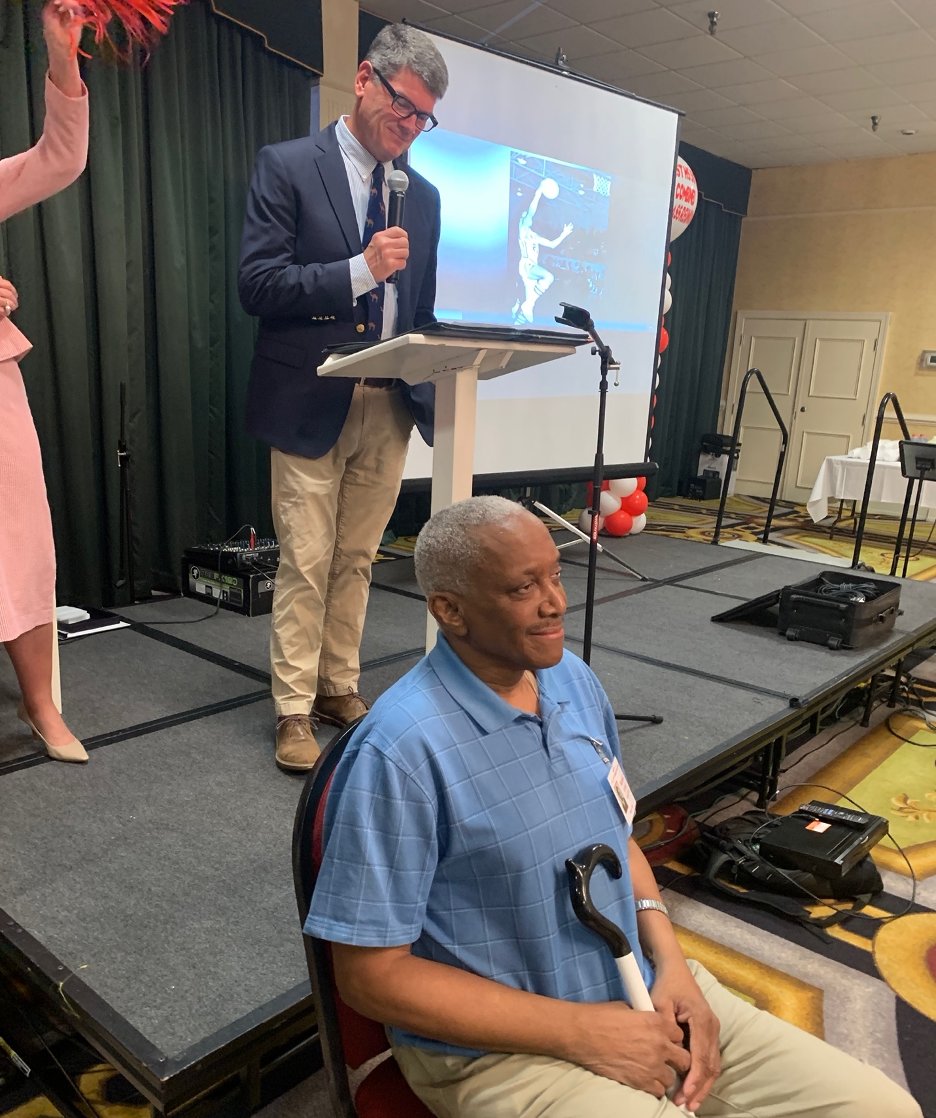 ‘It is with great pride that Campbell University inducts Marshall Lovett into its Athletics Hall of Fame,’ Associate Athletic Director Stan Cole tells the former basketball and track and field athlete. Lovett was inducted during the Seventy-First High School 1972 and 1971 class reunion on Saturday night.
Photo by Bill Kirby Jr.
By Bill Kirby Jr. | Columnist

This has been that joyous weekend for the once-kids of Seventy-First High School, the classes of 1971 and 1972.

And for Marshall Lovett, a 50th reunion to remember.

“I’m looking forward to it,” Lovett, 68, was saying earlier in anticipation of being with former classmates and those football teammates who were a part of the 1970 Falcon squad that defeated Northern Durham 14-12 in the finals of the N.C. High School Athletic Association East 3-A state showdown, where Lovett’s two-point conversion catch after Anzie Adams’ touchdown led Coach Jim Boyette’s Falcons to the title.

Lovett has been legally blind since 2000, when meningitis burned away the retinas of his eyes while he was living in New York City.

“I didn’t know I was sick,” Lovett says. “They said it was something bacterial. I went to bed one night and the next morning I could not see. I was in a nursing home for five years, and they didn’t think I was going to make it.”

Even though he is blind, Lovett still sees in his mind’s eye that 1970 night when his endzone catch as a junior wide receiver was the catalyst in a state championship.

“How do you go out and beat four state-ranked teams,” the 80-year-old retired coach says. “And we did. I was so happy for the kids because they worked so hard. And so happy for the Fayetteville community at large because of its support, and for the Seventy-First community. There’s a sadness because we’ve lost some players along the way. People who were instrumental in that win.”

But it was a 1970 team, he recalls, that excelled scholastically, athletically and with a school spirit unseen.

As for Lovett, Boyette says, he was a natural athlete and leader.

“He loved the game and he was a competitor,” says Boyette, who lives in Rock Hill, South Carolina. “You couldn’t denounce his athletic ability. He had a moxie about him. He was a charismatic ballplayer. You don’t get too far away from special memories. Marshall still is someone who will lift your spirits. He was always lifting them up to make us better. That was a way of life for him.”

Charles Babb, coach of the wide receivers and defensive backs, recalls the game as “a nailbiter,” and Lovett’s football skills.

Lovett would take his athletic talents to the basketball courts under Babb, where Lovett was a starting point guard averaging 17.7 points per game as senior captain of the team that won the regular season and tournament title, the district crown and the Holiday Classic basketball tournament. The Falcons finished 21-7. Lovett was name all-county.

Basketball was a natural sport for Lovett, too. He remembers growing up in the Hollywood Heights neighborhood shooting backyard hoops and at the courts of Lewis Chapel Elementary School and Anne Chesnutt High School, too.

“I would have hated to guard him and would have hated for him to guard me,” Babb, 77, says. “I talked to Norm Sloan at N.C. State about him. I even called John Wooden at UCLA. Marshall could have played at UCLA and anywhere. Danny Roberts at Campbell and I were good friends and he saw Marshall play.”

Roberts was in the midst of building a National Association of Intercollegiate Athletics power at Buies Creek.

“Campbell was my last shot at a full scholarship,” Lovett says. “I had a chance at N.C. State and the University of North Carolina at Chapel Hill. But Campbell taught me more about the game.”

Lovett left his mark, too.

He led the Camels to a 24-6 record in the 1974-75 season and to a 23-4 record in his senior year, scoring 1,064 career points and averaging 13.9 points and five steals per game. He was named Outstanding Male Athlete in 1976 and was selected to the third NAIA All American team.

When Lovett wasn’t starring on the basketball court, he was participating in track and field, and still holds the record of 6-foot, 6 inches in the high jump. After graduation, Lovett tried out with the Chicago Bulls, the San Antonio Spurs and the Detroit Pistons, all of the National Basketball Association.

His athletic career behind, Lovett earned a degree in respiratory therapy from Durham Technical Community College and later worked at Duke Medical Center and Wake Medical Center in Raleigh before relocating in 1989 to New York City.

Saturday was special for the classes of 1971 and 1972, and for the 1970 state champion football team. And all the more special for Lovett, who so long has dreamed of one day being inducted into his alma mater’s athletic hall of fame.

The moment was tender.

The moment was emotional.

“This is a very special person we are honoring tonight,” Heath would say. “He was humble back then, and humble today. He does not complain. He still lifts everybody up.”

Family members sat nearby, including niece Robin Fortner, who embraced her uncle.

“It is an honor for us to be here,” Fortner, 50, a retired Marine, would say. “My grandmother always kept a picture of him playing basketball. You made us proud. I am as proud of him as he could ever be of me. And I know,” she told her uncle,” Mama and Grandmama are looking down.”

Lovett fought back tears and his own emotions.

“This was special,” he later would say. “I can’t describe it. I was fighting back tears, and I still am.”

High school reunions are those special times men and women come together to relive their days of youth. To remember the Friday night football games and the basketball competitions. For remembering hanging out with one another at The Torch drive-in, junior-senior proms, and of course, for sharing photographs of grandchildren and even great-grandchildren.

On Saturday night, old Falcons from the classes of 1971 and 1972 were young and in their prime again, and Marshall Lovett, who lives in Springfield, Massachusetts, was among them.

“This is definitely a night I will always remember,” Lovett would say. “I never thought it would happen, and to have family here … wow.”

If only he could have seen the faces of classmates, teammates and coaches was his only regret.

“I felt in my heart,” Lovett would say, “their presence.”