Hill, a breast cancer survivor, has raised nearly $30,000 over the past five years for the cancer centers of Cape Fear Valley Health 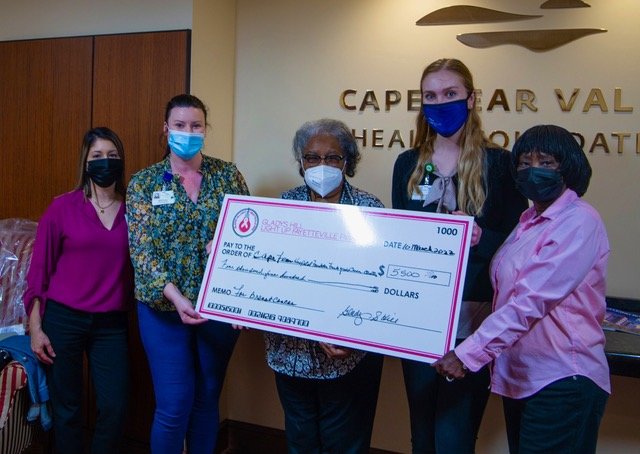 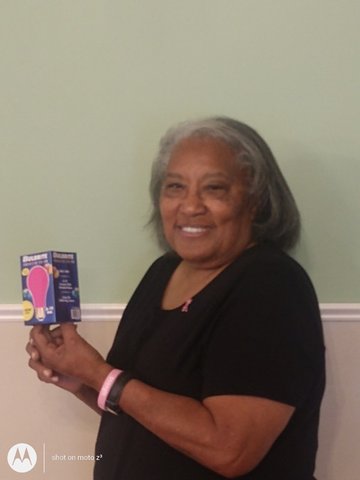 Gladys Hill has been selling pink lightbulbs since 2017. She wants to see the city bathed in pink light for Breast Cancer Awareness Month.
Contributed
Previous Next
Posted Wednesday, September 28, 2022 1:00 am

I do it for women needing assistance paying for their mammograms.”
Gladys Hill, who has been selling pink lightbulbs since 2017
Light Up Fayetteville Pink

Gladys Hill wants to bathe this community in pink lights during October, which is Breast Cancer Awareness Month.

This will be her sixth consecutive year selling pink lightbulbs for her Light Up Fayetteville Pink fundraiser, with proceeds going to the cancer centers of Cape Fear Valley Health.

The lightbulbs are $5 each.

Hill already has held two wine fundraisers with the help of Rhonda Bright, who provided a venue at Rhonda’s Rainbow Family of Dance at 1015 Clarendon St. in Haymount.

“When she reaches $10,000,” Bright says, Hill has agreed to get a Breast Cancer Awareness ribbon tattoo. “And so am I.”

Bright says she is planning a line dance Stamp Out Breast Cancer fundraiser in October.

Meanwhile, Hill says she will be canvassing community residents with volunteer assistance from Diane Wilson and Deborah Ackerson. The Delta Sorority of Fayetteville State University, Hill says, also recently assisted with a pre-fundraiser.

Hill is grateful, too, to Kelly Bryson of Southern Pines.

“I did a wine tasting,” says Bryson, a wine distributor for Johnson Brothers Mutual based in Raleigh. “And we are thinking of doing another one in October to include a silent auction. We are going to do something. We may have more than one.”

“I will be going door to door in neighborhoods beginning Monday,” Hill says. “Breast cancer does not stay in one neighborhood. It’s in every neighborhood.”

Hill doesn’t want to see pink lightbulbs aglow in community neighborhoods alone. She wants to see community businesses lit up in pink. And, as in the past, Hill hopes the city will light up the Market House in pink. The downtown landmark was undergoing repairs in 2021 as a result of the May 30, 2020, protest over the death of George Floyd at the hands of a Minneapolis police officer.

Hill says she has contacted city officials about pink lighting for the Market House, but so far has received no response.

Breast cancer can affect anyone and it doesn’t discriminate.

About 287,850 new cases of invasive breast cancer will be diagnosed in women this year, according to the American Cancer Society, with 51,400 cases of ductal carcinoma in situ. About 43,250 will die from breast cancer.

Hill was diagnosed in 2019 with ductal carcinoma in situ, non-invasive breast cancer with origins in the milk duct.

“I’m a three-year survivor as of June,” Hill says.

A diagnosis of breast cancer can be devastating for any woman, and you will find breast cancer can affect men, too. That small lump in the breast is not something to dismiss. The tumor can be malignant, which is why mammograms are so important to hopefully address the disease.

“I do it for women needing assistance paying for their mammograms,” Hill says.

October is Breast Cancer Awareness Month, and yes, Gladys Hill hopes to see this community adorned in pink, including the Market House.

I asked the four women who serve on the Fayetteville City Council their thoughts on the Market House being a part of the Light Up Fayetteville Pink initiative.

Shakeyla Ingram, Courtney Banks-McLaughlin and Brenda McNair did not respond.

“I support the fight against breast cancer,” five-term Councilwoman Kathy Keefe Jensen says. “With that being said, I support the fight for multiple sclerosis and many other diseases. Mrs. Hill started the Light Up Fayetteville many years ago. It was a special time, especially for the women on the front lines of this disease. It was heartwarming years ago to see these strong women fighting the fight. With all this being said. I believe that we need to bring awareness to many diseases. I do it in my windows at my business, too.”

Jensen stopped short of addressing the Market House in pink.

But I won’t stop short.

Light up the Market House in pink, even if it’s just lightbulbs in the windows.

Breast cancer doesn’t care about politics, personal agendas or who you are when rearing its ugly head.