‘We did not raise the property tax,’ Cumberland County Board of Commissioners Chairman Glenn Adams says, ‘and that was important coming out of a pandemic.’ 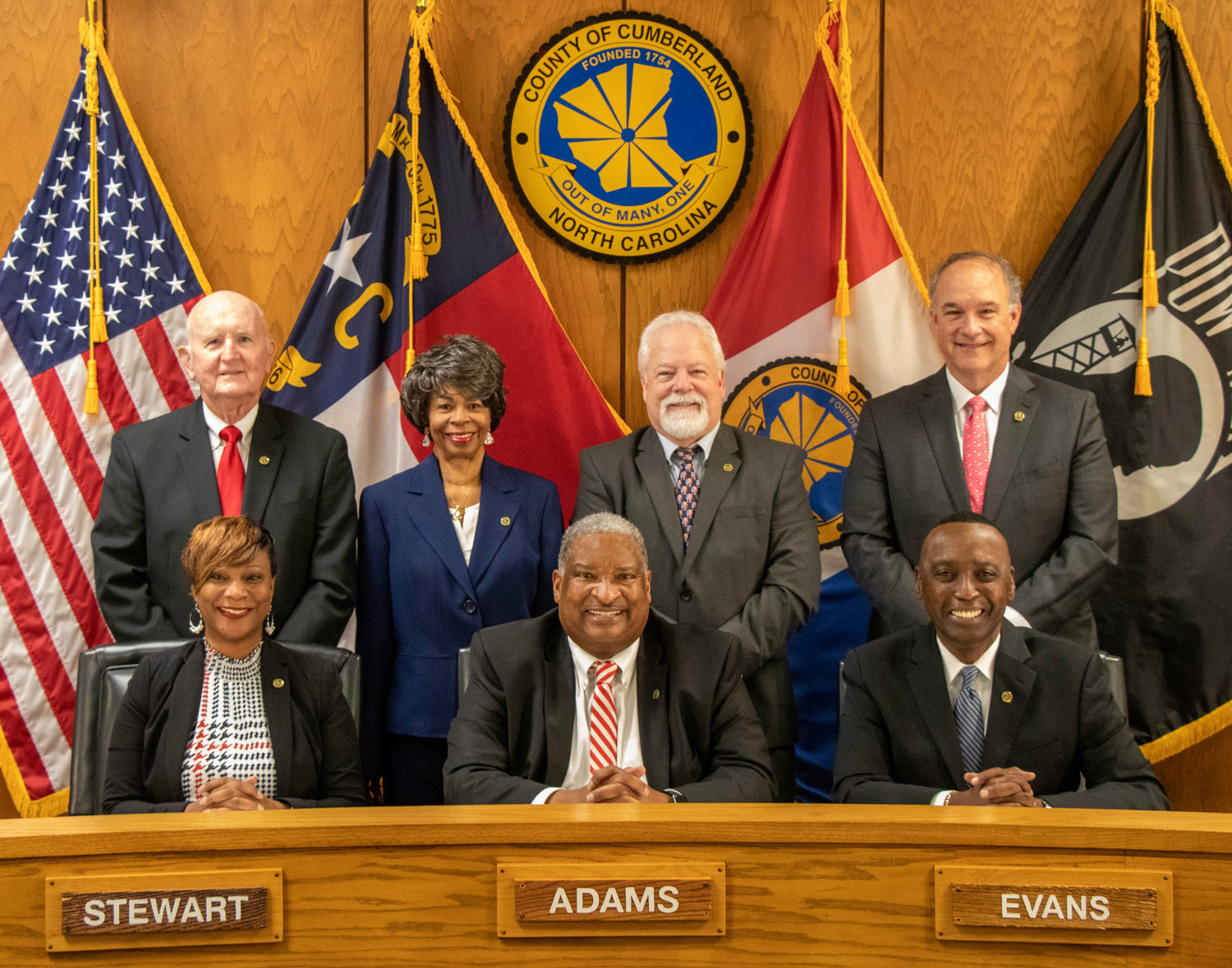 The Cumberland County Board of Commissioners on Monday adopted the fiscal 2023 budget on a split vote. The budget keeps the property tax rate unchanged.
Contributed
By Bill Kirby Jr. | Columnist

Gasoline prices are over $4.50 per gallon, food costs at grocery stores and restaurants are up, and it’s safe to say our Cumberland County Board of Commissioners was prudent Monday in adopting the fiscal 2023 budget with no property tax increase.

Voting for the budget were Commissioners Glenn Adams, Toni Stewart, Jeannette Council and Larry Lancaster. Jimmy Keefe and Michael Boose voted against the budget, while Charles Evans was absent.

“Amy Cannon composed a budget that was excellent,” Adams, the board chairman, says about the county manager. “We did not raise the property tax and that was important coming out of a pandemic.”

And quite important considering these economic issues all of us are facing at the gas pumps and at grocery stores. Personally, my health issuance premium has increased, along with the cost of my prescription drugs and my Spectrum cable TV, internet and telephone cost.

The dollar only stretches so far.

Overall, our county commissioners gave the green light to a budget just under $553 million that keeps the property tax rate at 79.9 centers per $100 valuation. It appropriates $362 million for general fund expenditures, a $22 million increase over 2022.

“The budget process is a hard process of considering our departments’ needs and outside agencies’ needs, and you’re not able to budget everybody,” Adams says. “Therefore, you have to prioritize. I think that this board did an excellent job doing that, prioritizing and bringing our community forward.”

Adams is right that you can’t please everybody. There will be some people who are upset, particularly leaders of the county school system. The Arts Council of Fayetteville-Cumberland County likely will be annoyed, too.

“We were able to provide the school system with enough money to meet their mandate to raise their employees to $15 an hour, and that was important,” Adams says.

The school system had hoped for and requested $88.2 million but will have to settle for $84.3 million, and that’s $1.3 million more than it received in the 2022 budget. The school system received an additional $3.9 million earmarked for school health nurses, school resource officers and school crossing guards. Many of us particularly like funding for school resource officers when you consider the tenor of these turbulent and unsettling times.

Even with the $84.3 million, the superintendent for Cumberland County Schools is not singing commissioners’ praises.

“No, I am not satisfied,” Superintendent Marvin Connelly Jr. says. “The state has mandated that we move all classified staff to $15 an hour, but we have not received sufficient funding to make this happen. The county manager's budget recommendation included new vehicles for the sheriff’s department, more funds for FTCC and other priorities. K-12 public education is not even listed as one of the commissioners’ top priorities. You may have noticed that the commissioners didn't even discuss our request when they went upstairs to vote. The only thing they discussed was increasing their salaries and they did vote to increase the vice chair's salary.”

Commissioners kept their eyes on the ball in other areas, including $258,600 for Phase 1 of the Gray’s Creek Water Project that includes two elementary schools and residential customers. And they are paying attention to an events center to replace the Crown Arena and Crown Theatre. Commissioners approved $82.5 million in April for construction and another $2.5 million for an architectural design management team.

A community the size of Cumberland County, Adams says, needs a venue like an events center, and the chairman says this budget keeps the center on target as a much-needed amenity for the community.

“There are several sources of funds to push these items forward,” Adams says about the events center. “Possibly CIP, ARP and general funds.” That, for those of us who do not speak in acronyms, is Capital Improvement Plan and the American Rescue Plan.

Commissioners also are looking out for the homeless population, with general fund monies available for a shelter. And Fayetteville Technical Community College received $14.2 million, up $935,000 over 2022.

Dissenters and a no-show

You may be wondering why Keefe and Boose voted against the budget.

“There were a couple of issues that I was just not comfortable with regarding investment in the community and I believed to not be in the best interests of the citizens, children and growth,” Keefe says. “Overall, I believe it was a solid budget, but I had hoped for more discussion and compromise.”

Keefe did not detail his precise issues.

Boose, however, didn’t mince his words.

“Jimmy is a nicer person and much more diplomatic than I am,” Boose says. “I agree that Amy and staff submitted a solid, reasonable budget in light of the past year and projections for the upcoming year. Although I didn’t agree with all budget recommendations, the proposed budget was acceptable.”

“Then, along came an unusual closed session,” Boose says. “The entire closed session was spent on one issue: ‘How much of a raise for the vice chair.’ Not one second of discussion involved any consideration of the request from the Cumberland County Schools. In fact, I am not sure yet, but I believe the only reason we had the closed session was for ‘personnel.’ There was no prior notice of the nature of the ‘personnel’ matter. When it was announced during the closed session what the purpose was, I proposed that it be made an issue for the $95,000 study of all county salaries that was just approved and that we deal with it after the results from the evaluation are complete.”

“There has never been a ‘bonus’ in salary for the vice chair in excess of the standard commissioner,” Boose says. “I was not convinced that this salary was any more important nor urgent than any other salary and would not vote to approve. A majority of the board had many reasons to not approve a $2,000 increase for all commissioners.

Yet a majority could not explain why those same reasons did not apply to the vice chair. That pay issue and other minor issues and the inability to have an open-minded discussion resulted in my no vote.”

Stewart is a freshman commissioner.

You may be wondering, too, why Evans was not present Monday for a vote on the budget. After all, when commissioners are voting annually on how to spend our money there is no more important meeting for a county commissioner.

“Out of town flight was delayed, which when I arrived at Charlotte, I had to wait for a flight,” Evans says. “Originally, my flight would have been here on time and I would have made the meeting.”

The budget, Evans says, had his support, particularly the water issues in Gray’s Creek.

“And I appreciate the moving forward with the homeless shelter,” he says, and “finding a location.”

As for that pay raise for Stewart, the vice chairwoman, Evans says he did have an issue.

“Yes, I would probably had questions regarding the monies for the vice chair,” Evans says. “I understand that the discussion was held in closed session, which I believe should’ve been done in (an) open meeting.”

Not a bad budget at all for the most part.

The school system didn’t get everything it wanted, and the Arts Council got $30,000 less than last year. There are some issues with that $2,000 salary bonus for the vice chair, too. But commissioners didn’t raise property taxes in these trying financial days with no end in sight. And we’re certainly better off than Wake County, where residents saw their property taxes jacked up by 1.95 cents to 61.95 cents per $100 of assessed property value.