‘You can’t do it by yourself,’ says Davis Molnar, a basketball and soccer standout who has been honored by the N.C. High School Athletic Association. 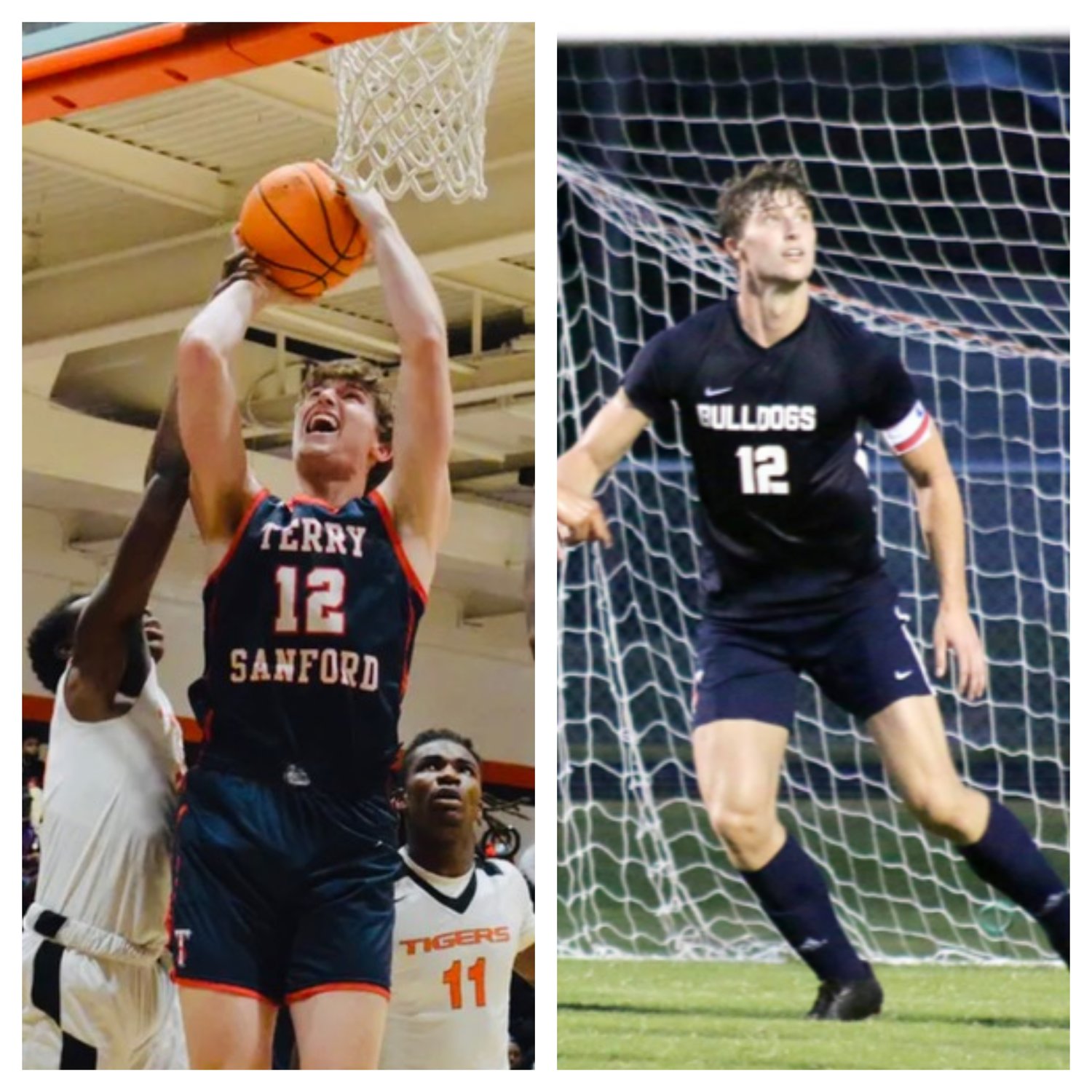 Davis Molnar, a basketball and soccer standout at Terry Sanford High School, has been selected as the N.C. High School Athletic Association Male Athlete of the Year for the 2021-22 season.
Contributed
By Bill Kirby Jr. | Columnist

Davis Molnar may hold the distinction of being the top high school male athlete in the state, but it is an honor the Terry Sanford High School graduate shares with others.

He is skilled in basketball.

He is skilled in soccer.

“But you can’t do it by yourself,” says Molnar, 19, who has been selected as the N.C. High School Athletic Association Male Athlete of the Year for the 2021-22 season. “Obviously, I am blessed. But there were all of my teammates, the assistant coaches and coaches.”

Molnar averaged 18.6 points, 11.8 rebounds and 4.6 assists as a point guard in 2021-22 that saw the Bulldogs record an 18-9 season under the coaching of his father, Karl Molnar. Terry Sanford lost 63-48 in the second round of the NCHSAA 3-A playoffs. He was the All American Conference Player of the Year. The Bulldogs won the 2021 Patriot Athletic 3-A Conference in 2021, the conference title in 2019 and the 2019 Cumberland County Holiday Classic.

On the soccer field, Molnar scored 37 goals and had 15 assists as a center and defensive end. The Bulldogs lost 2-1 in the first round of the state playoffs to Western Alamance. Overall, the Bulldogs compiled a 65-19 record in the past four seasons, winning the All American 3-A Conference tournament championship in 2021, sharing the regular-season title in 2021 and winning the Patriot Athletic 3-A Conference crown in 2020.

Molnar equally excelled in the classroom with a 4.33 grade-point average.

Molnar graduated on June 4 and headed the following day for Furman University in Greenville, South Carolina, on a basketball scholarship.

“The team we have this year is very good,” Molnar, a 6-foot-6 forward, says about the Paladins, who will be led by 6-3 senior guard Mike Bothwell and 6-7 senior forward Jalen Slawson. “I am hoping for some minutes. But I think we will have a great season.”

“This year is vengeance,” Molnar says, “because we lost on a buzzer-beater.”

As for soccer, the sport is in his past.

He’s concentrating on basketball, a game he learned under his father while growing up in the Kingsford and VanStory Hills neighborhoods.

Father ‘taught me everything’

“My early days it was all in the backyard,” he says. “Later, there was a goal in my driveway.”

Davis Molnar gives credit to his father for teaching him the fundamentals of the game.

“He taught me everything about basketball,” he says. “He taught me the IQ of it, how to shoot and how to play offense and defense.”

Being named NCHSAA Athlete of the Year is an award he shares with his parents.

“They sculpted me into the person I am today,” he says about his father and mother, Kim Molnar. “They went out of their way just so I can have everything. My father coached me and was on the ride with me.”

Karl Molnar says coaching your own children can be challenging.

“I was blessed to coach my oldest son Guy in soccer and Davis in basketball,” says Molnar, 52, who played basketball and soccer at The Fayetteville Academy from 1984 to 1988, when the Eagles won three consecutive state soccer titles in 1984, 1985 and 1986. “I was fortunate to have great experiences with both boys. Davis and I got along great. We worked well together. He always knew what defense or offense I wanted to be in, so he would just make the call himself, which made my job easier. I am going to miss having him on the court, but I am so thankful that we had that time together.”

“We are very proud of Davis for earning this award,” he says. “There are so many talented athletes competing for player of the year honors in every sport. To be recognized as player of the year in two sports is pretty amazing. NCHSAA Athlete of the Year is an incredible honor.”

For now, Davis Molnar is adjusting to college life on the picturesque campus of Furman, where one-a-day practice this summer is a part of becoming a basketball Paladin.

“It’s the family atmosphere at Furman,” he says. “When I came to visit, everything went right. The campus, the coaches, the team. Everything is just right.”

Davis Molnar is one of three from the Cape Fear region honored by the NCHSAA.

Kylie Aldridge, a recent graduate of Gray’s Creek High School, was one of five recipients of the 2021-22 Mark Dreibelbis Scholarship. Like Molnar, she is a scholar athlete who competed in softball and volleyball. She received a $2,500 scholarship, according to a news release, and will compete in softball at Virginia Tech in Blacksburg, Virginia, while pursuing a degree in biology.

George Stackhouse, boys’ basketball coach at Westover High School, earned the Homer Thompson Memorial “Eight Who Make a Difference” award for coaching dedication and was recognized as an excellent role model for student-athletes. The award is given in partnership with the N.C. Farm Bureau Mutual Insurance Co.