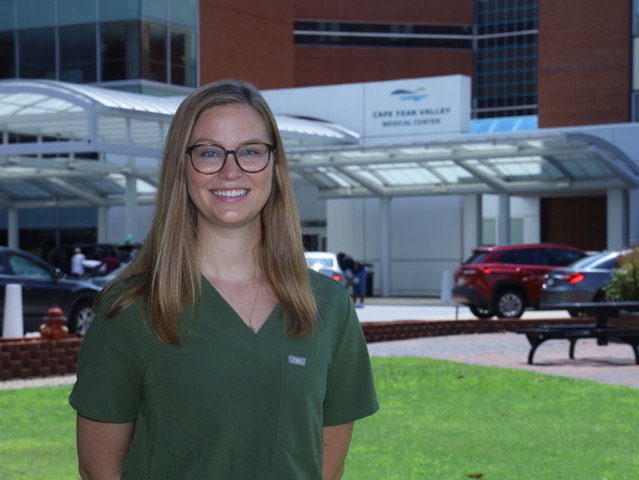 This is a great place to be, and more people should look into Cape Fear Valley Health for medical training. This is the perfect place to do that.”
Dr. Holly Kusel says about the CFVH Medical Residency Program
By Bill Kirby Jr. | Columnist

Dr. Holly Kusel is right where she wants to be.

And right where Kusel wants to be is in the Cape Fear Valley Medical Center emergency department helping those who are in a health crisis.

“It’s busy and you see a little bit of everything,” says Kusel, 28, who is one of 89 new residents and fellows in the sixth class of the Cape Fear Valley Health Medical Residency Program. “You’re there in people’s times of need and their worst hour.”

“It’s our job,” Kusel says, “to help that patient get through it.”

Holly Kusel grew up in Tarboro and attended the North Carolina School of Science and Mathematics in Durham.

“I knew I was interested in the sciences and practical applications,” she says. “And what’s more practical than knowing how the human body works and how to take care of it? I was blessed with that interest. The North Carolina School of Science and Math gave me early exposure.”

Edgecombe County is just 30 minutes from East Carolina University, where Kusel in 2016 earned a degree in biology.

“I took two years off,” she says while she was still debating a career. “I worked as a medical scribe in an emergency room in Rocky Mount, where we did medical documentation. The only other career I considered was being a truck driver.”

Kusel enrolled in the Edward Via College of Osteopathic Medicine campus in Spartanburg, South Carolina, in 2018 and graduated in May, She found herself a part of the CFVH Medical Residency Program in June.

“Wanting to do emergency medicine, why would I not want be at one of the busiest places in the country?” she says. “There is the unique population, and we have people from all over the world and the country in our department.”

Its genesis was in 2017, according to the health system. The program provides hands-on training for students in emergency medicine, obstetrics and gynecology, general surgery, internal medicine and a transitional year program. Its goal is to develop a first-class physician workforce of trained health care providers who will practice in this community and in Southeastern North Carolina.

“We’re very proud of the latest cohort of our residency programs,” says Dr. Don Maharty, vice president for Medical Education. “Cape Fear Valley has been incredibly successful in rolling out the program over the last five years. Our initial goal was to have 130 residents in five programs in five years, and we’ve far surpassed that.”

“Today, we have 250 residents in our health system and 15 residency programs, and we’re still growing,” Maharty says. “We’re showing we can create strong, healthy programs to train physicians for our community. Over the last two years, more than half of the graduates from these programs have chosen to join the Cape Fear Valley team after completing their residency.”

There is another allure, too.

“This year is going to also see the completion of the Center for Graduate Medical Education, which we’re very excited about,” Maharty says about the $33 million, 120,000-square-foot, five-story building that will include the Neuroscience Institute. “The facility will have state-of-the-art training and educational spaces that are going to further impact the learning environment we’ve created here, as well as our ability to provide exceptional care for our patients.”

Kusel is watching the construction with anticipation. The building is scheduled to open this year, according to the health system.

“From what I’ve seen it’s really nice,” she says. “It makes for fellow residents and myself and the GME so many resources to have this high-tech building to train in.”

Kusel is excited to be a part of the CFVH Medical Residency Program while she and her husband, Josh, an electrician, are acclimating to life around this community.

“We’ve been to a Woodpeckers game,” she says about the Fayetteville Woodpeckers minor league baseball team that plays its games at Segra Stadium downtown. “And I’ve made a lot of trips to Home Depot. We’re first-time homeowners and getting settled in there. But we’re looking forward to getting out more.”

At home, there is leisure time with one another and their poodle Waffles.

“Waffles just turned two,” Kusel says. “Best thing that ever happened to my sanity. Didn’t think I could love a dog so much.”

You’ll find Dr. Holly Kusel this month in the children’s emergency department at the medical center on Owen Drive.

She has an engaging bedside manner to put any patient or family member at ease.

The doctor is right where she wants to be.

“This is a great place to be, and more people should look into Cape Fear Valley Health for medical training,” Kusel says about the CFVH Medical Residency Program. “This is the perfect place to do that.”