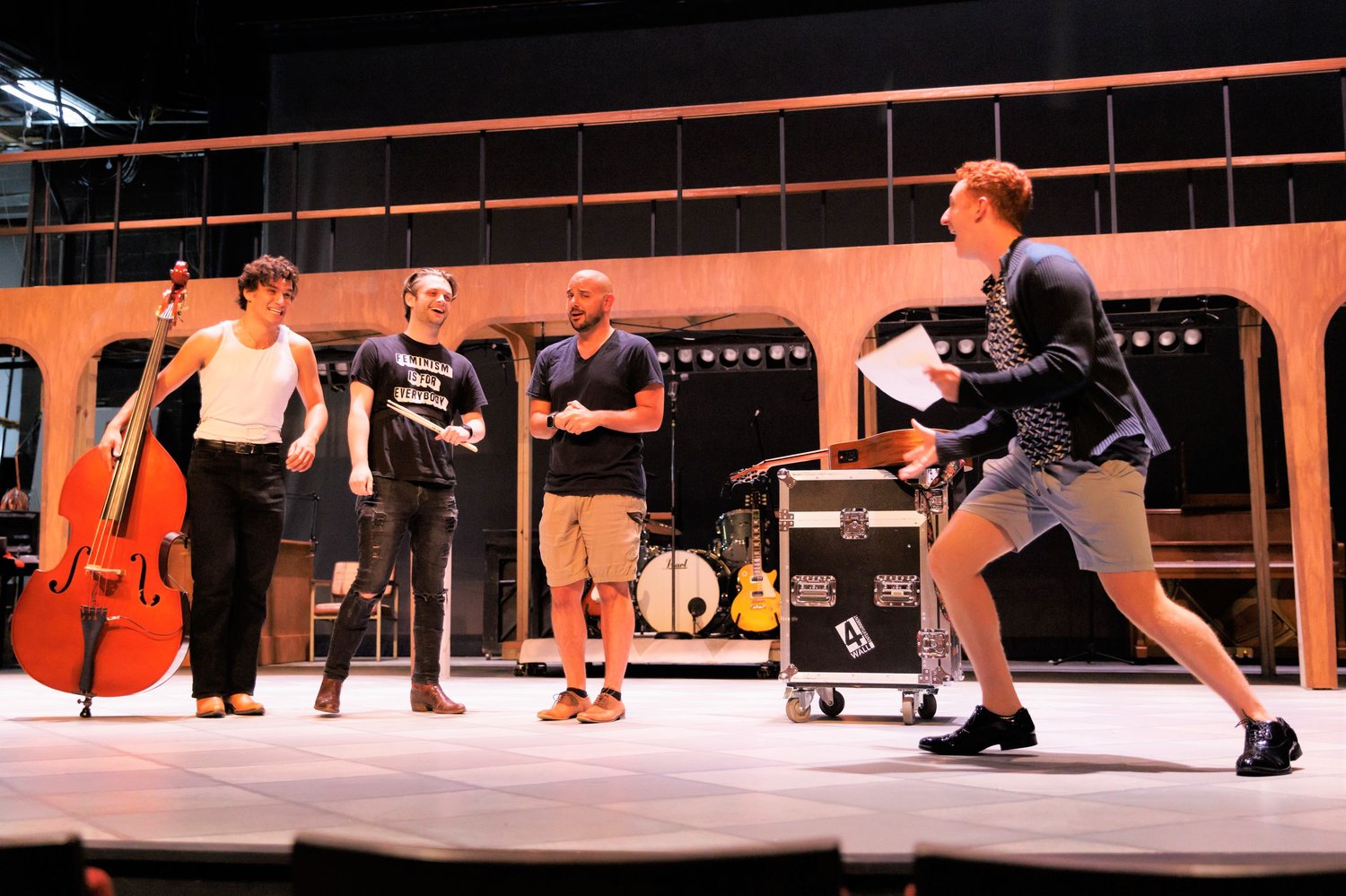 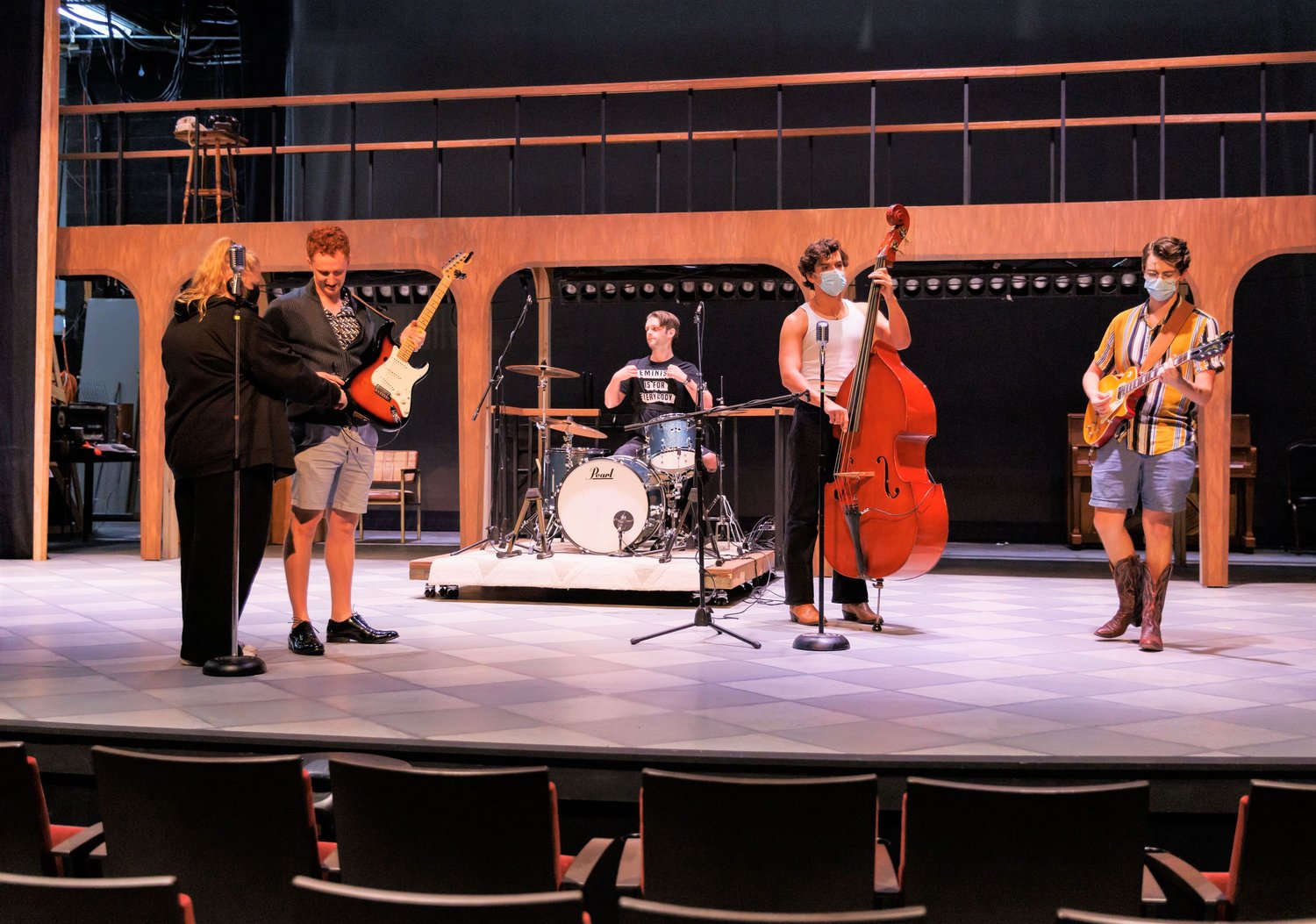 The cast of Cape Fear Regional Theatre's "Buddy: The Buddy Holly Story" get some technical direction on stage.
Photo by Tony Wooten 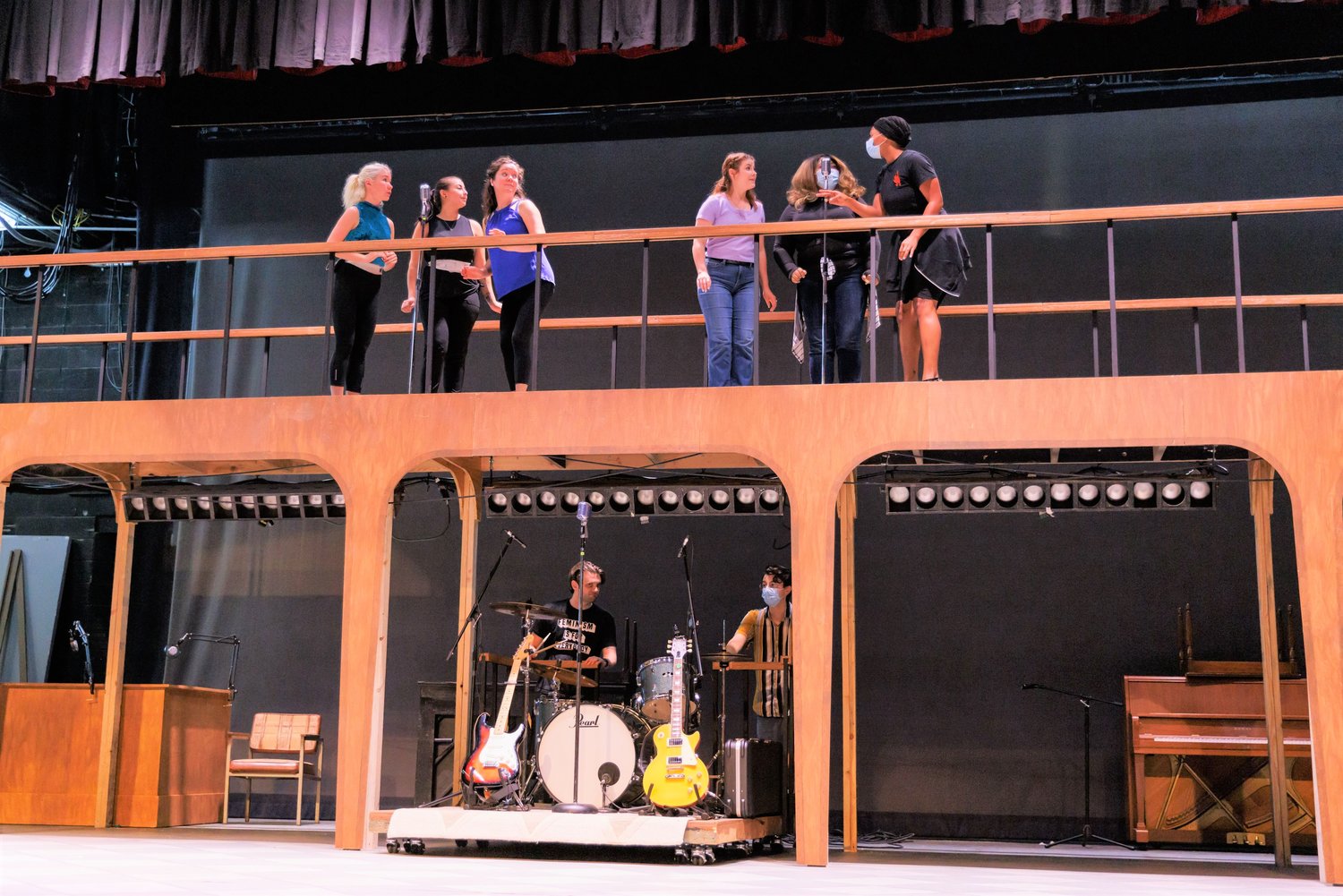 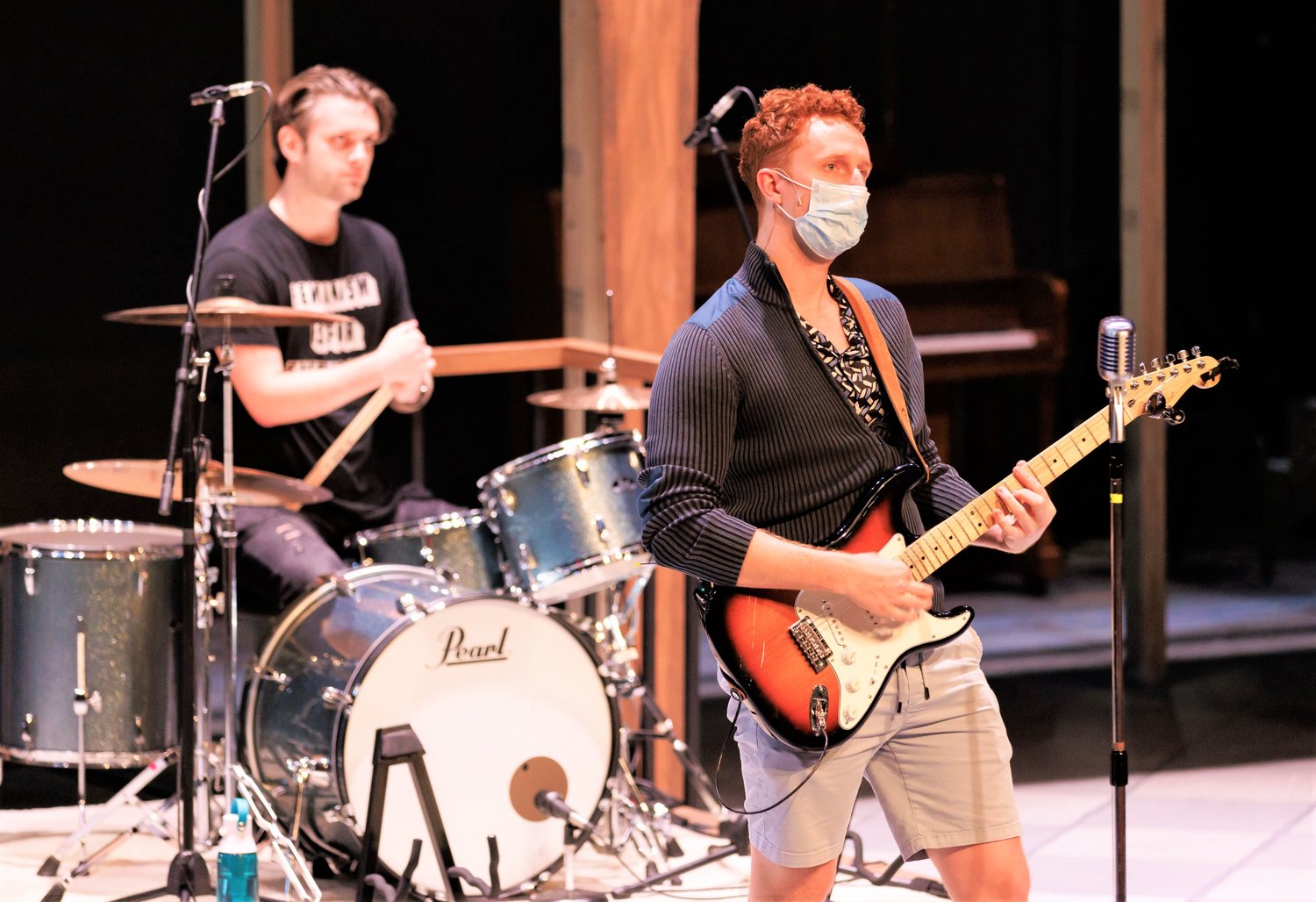 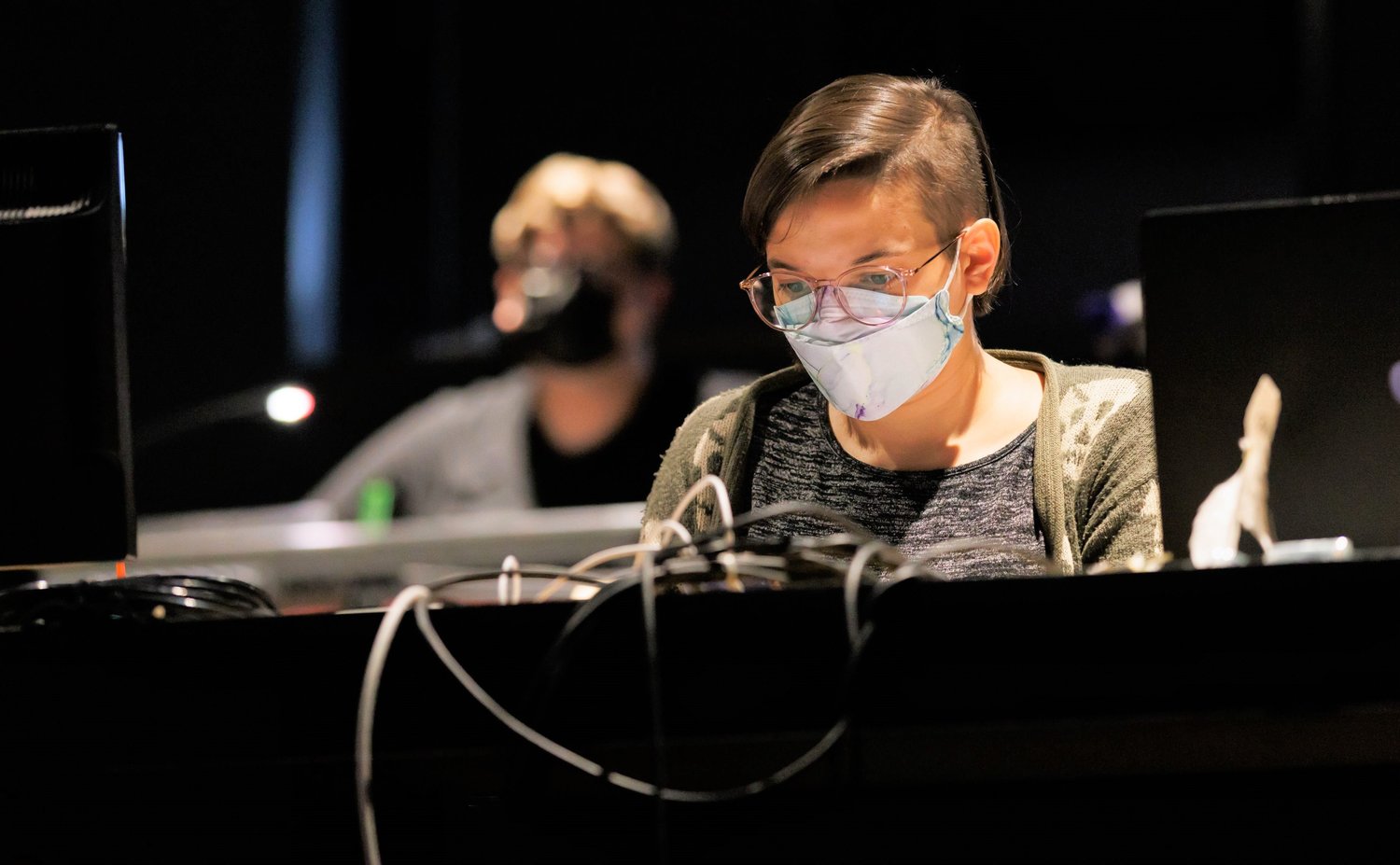 Elizabeth Steward, lighting designer, monitors the lighting during a rehearsal of "Buddy: The Buddy Holly Story."
Photo by Tony Wooten 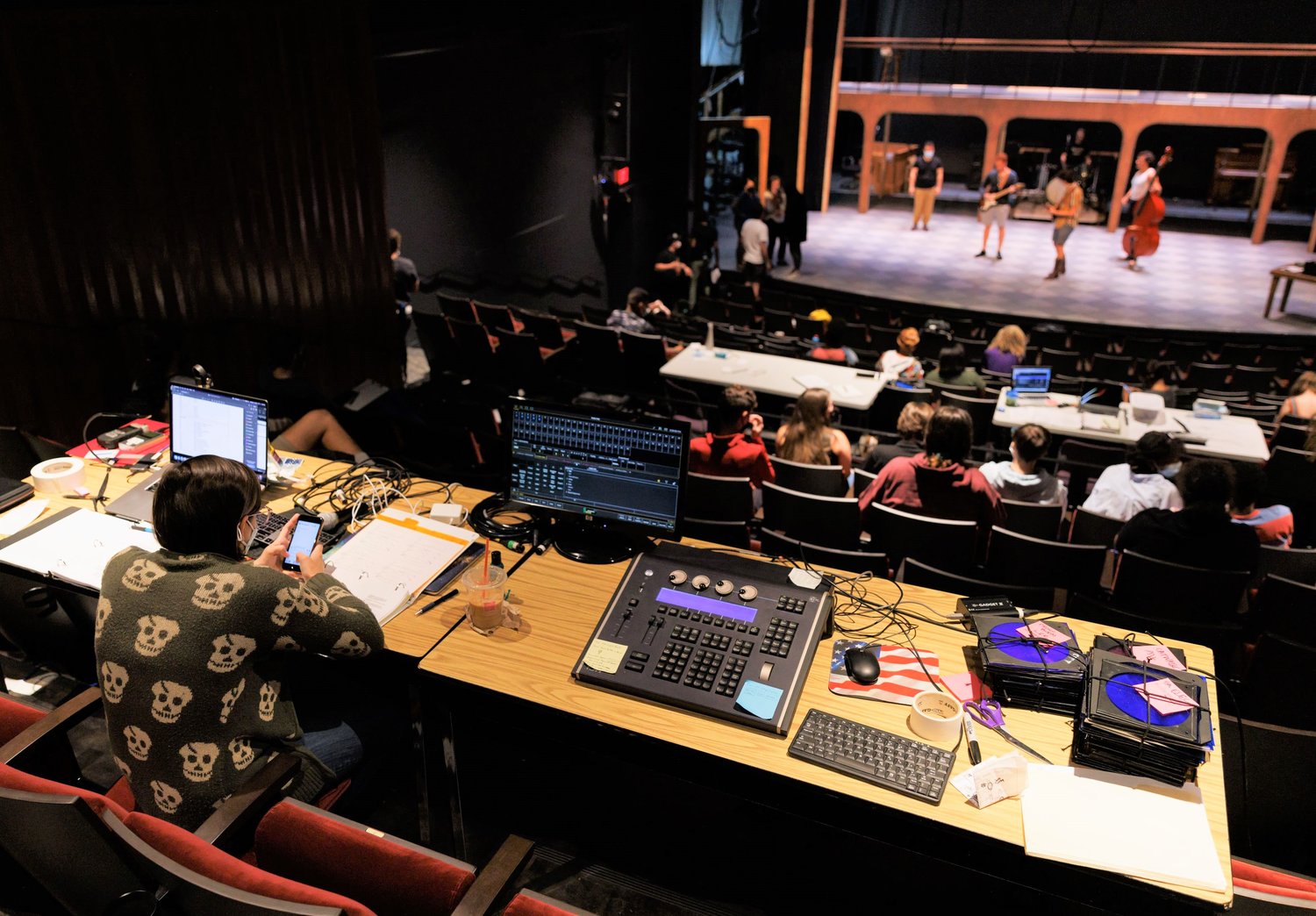 The cast of "Buddy: The Buddy Holly Story" rehearses a scene.
Photo by Tony Wooten 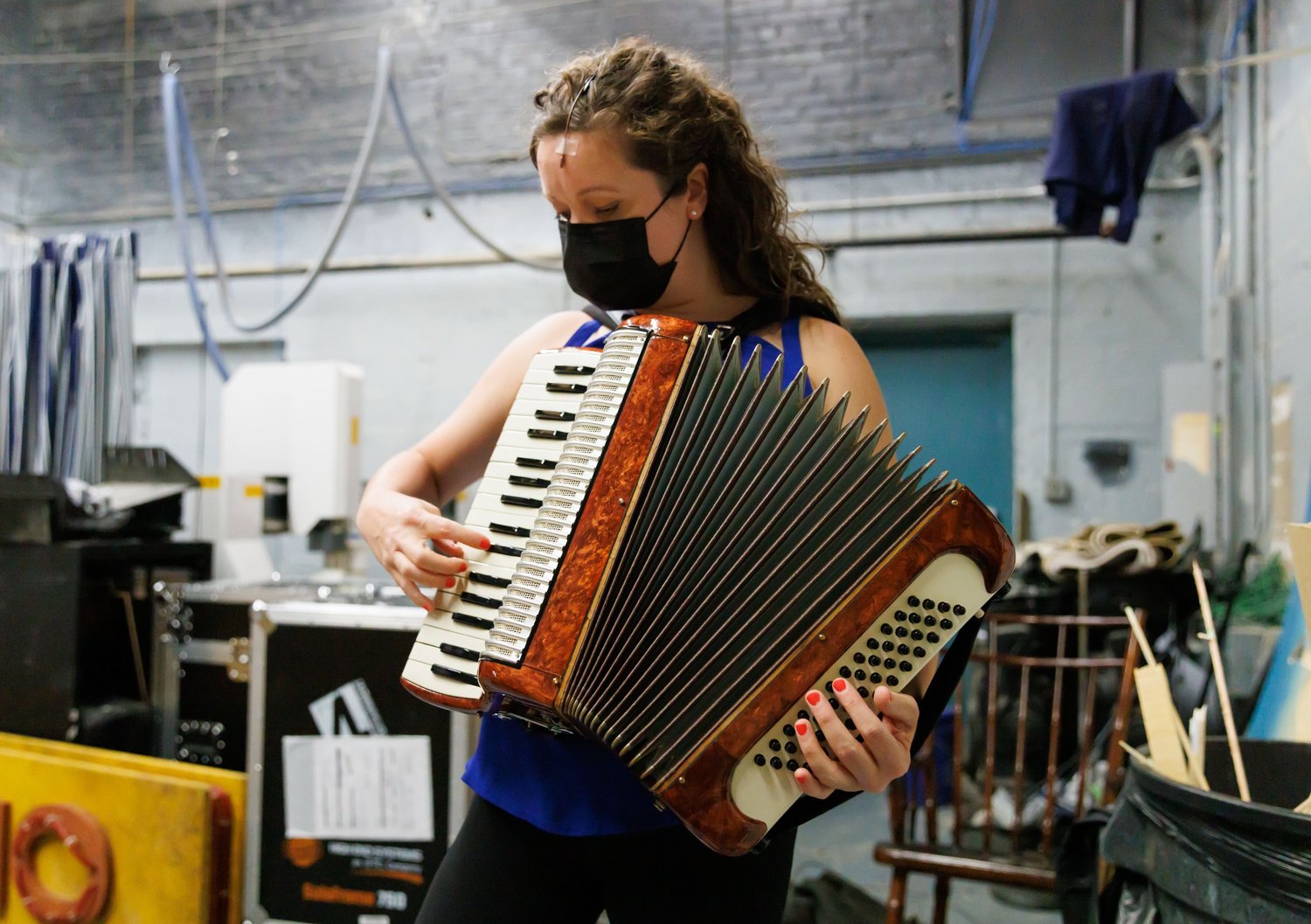 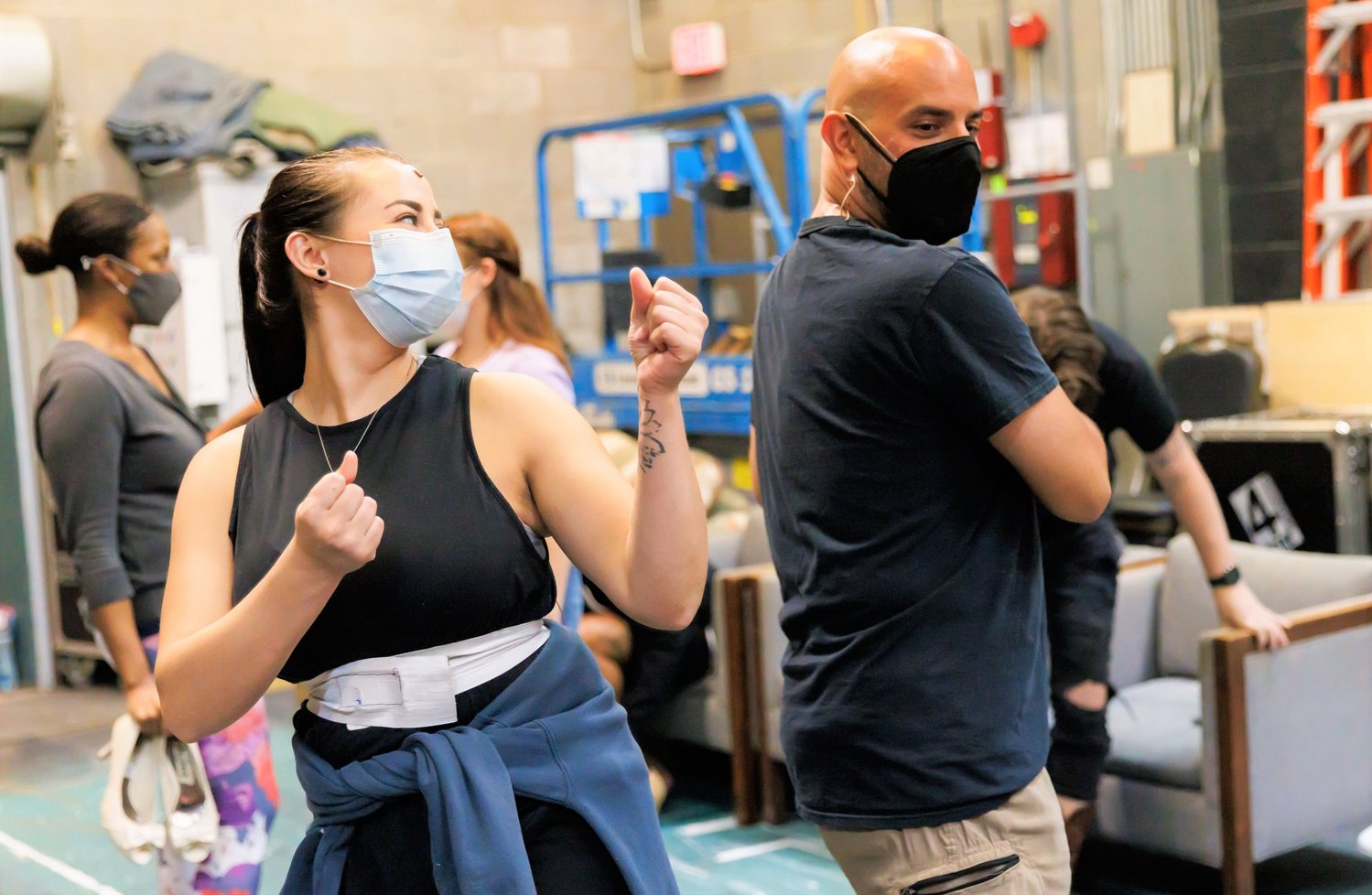 Linda Flynn and Mikey Lobalsalo enjoy a moment backstage during rehearsal for the musical.
Photo by Tony Wooten 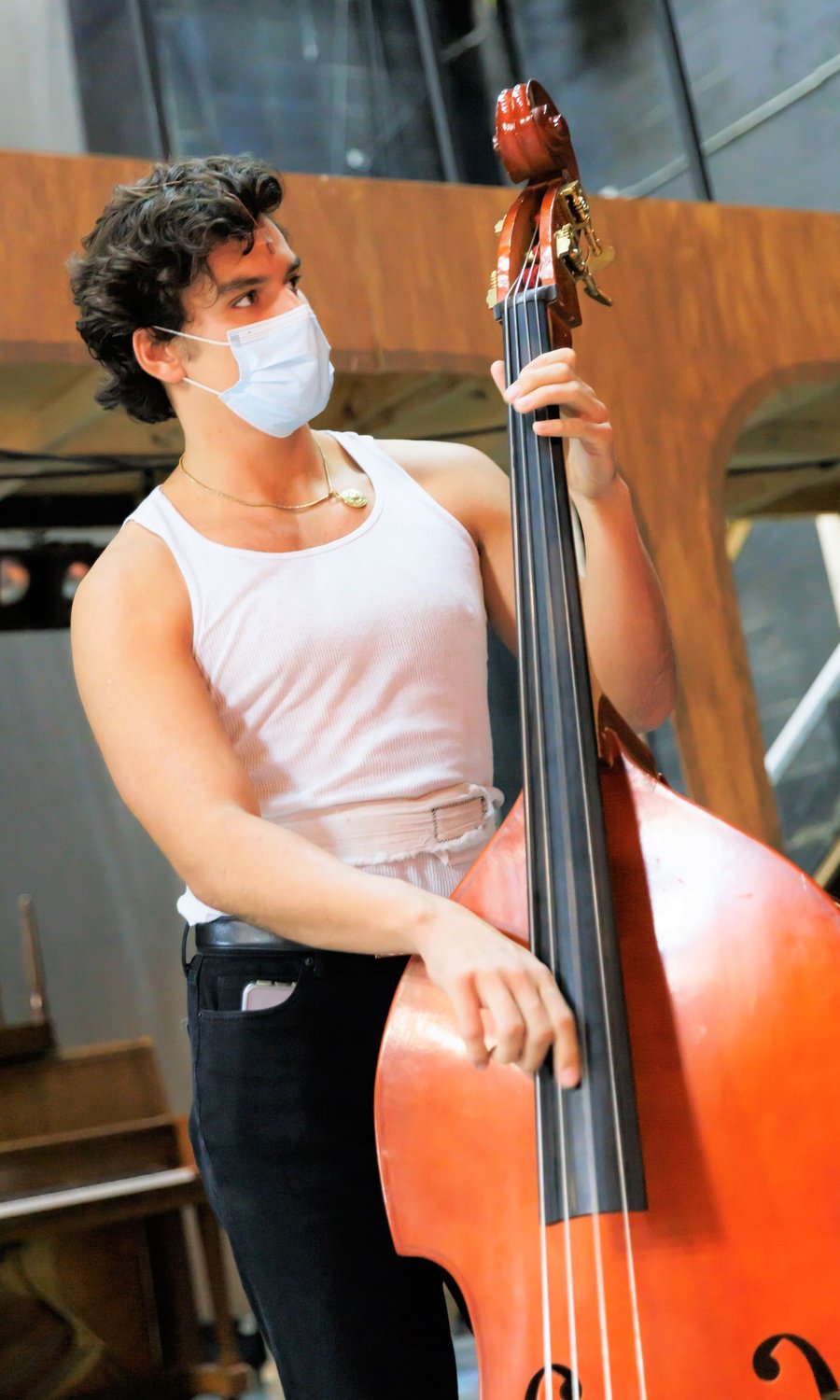 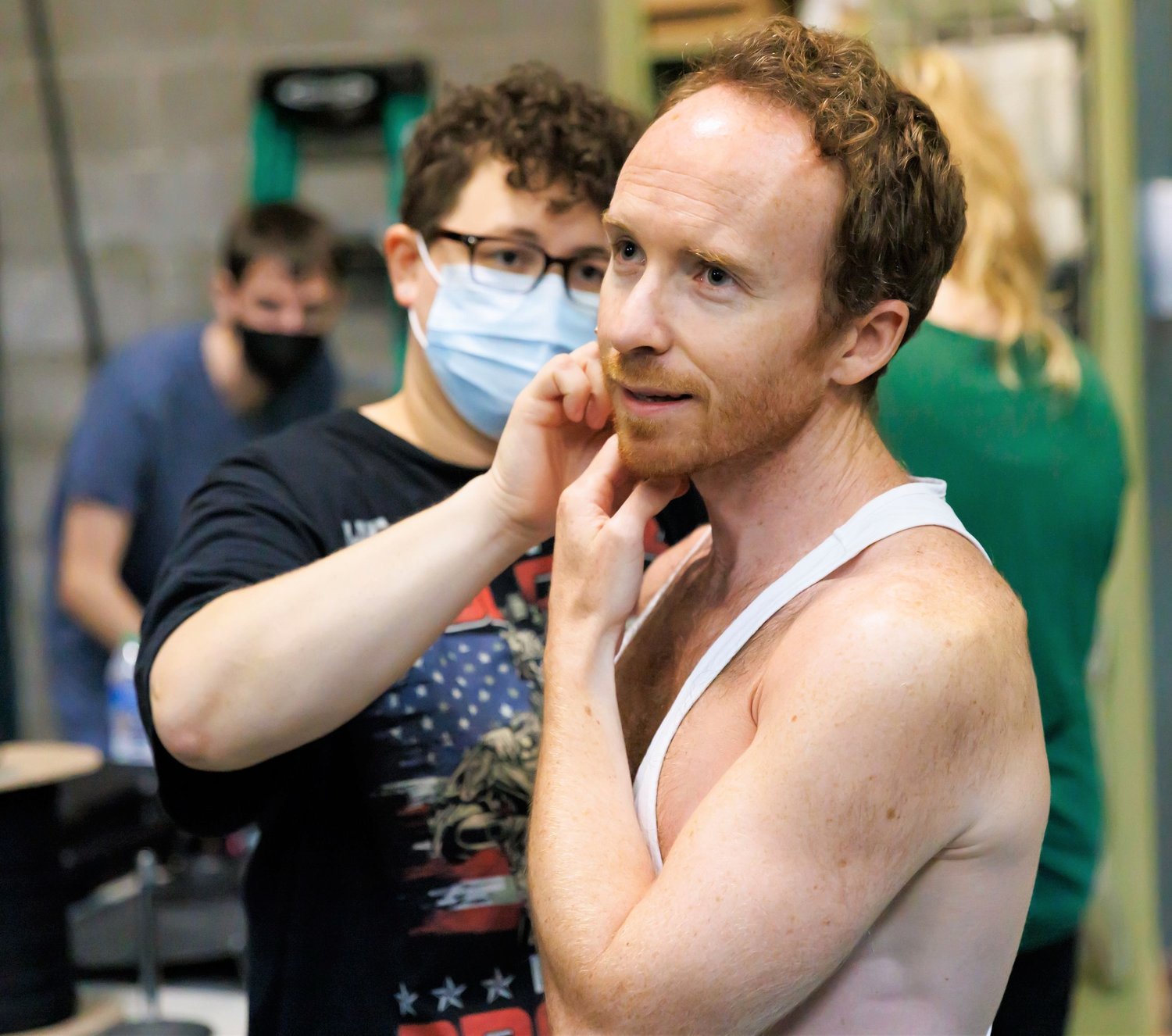 Keaton Eckhoff, who stars as Buddy Holly, gets help backstage during a rehearsal for "Buddy: The Buddy Holly Story."
Photo by Tony Wooten 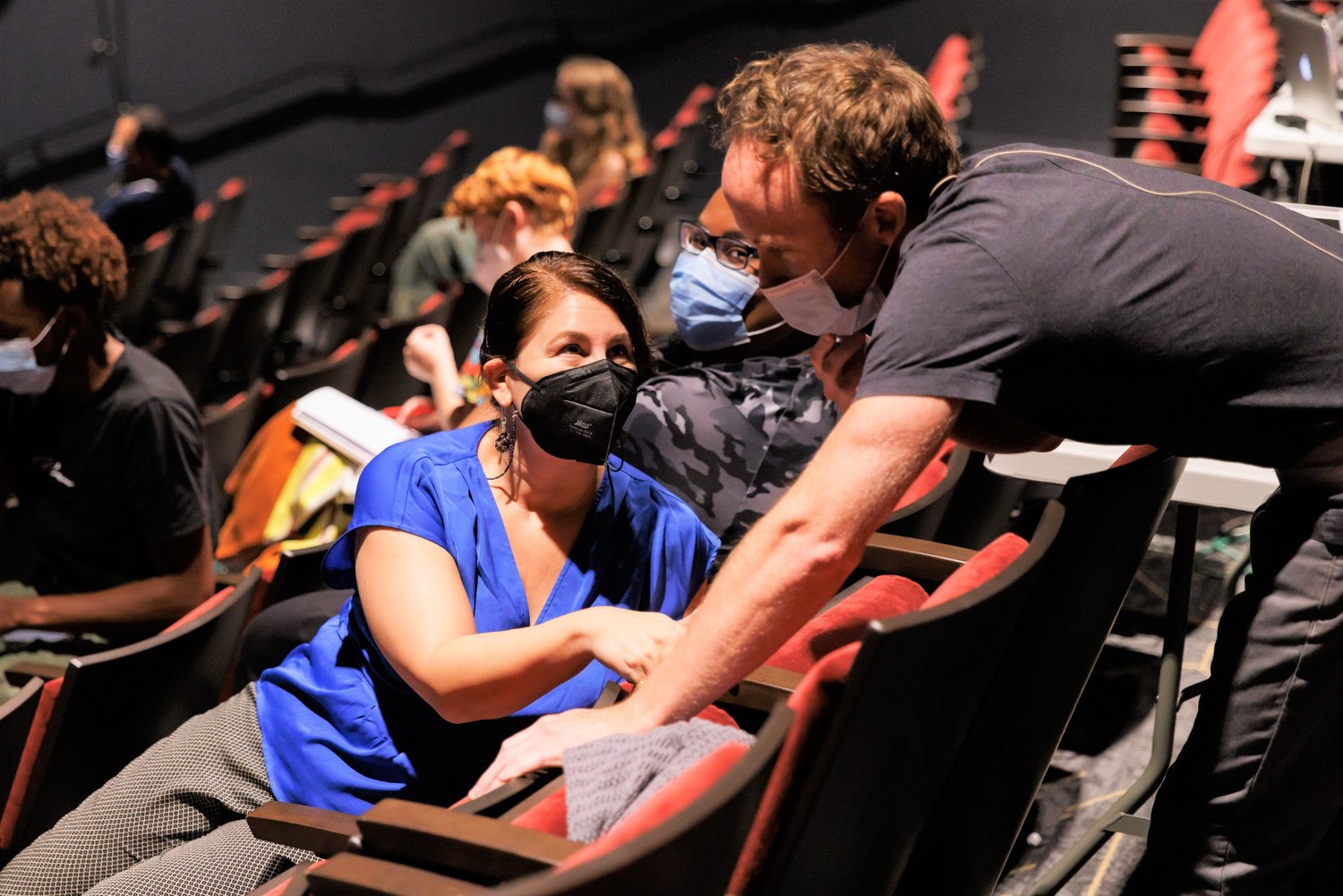 A month after classic rock fans were remembering Elvis Presley, Cape Fear Regional Theatre is celebrating the legacy of another musical legend who was gone too early.

The theater will open its season on Thursday with “Buddy: The Buddy Holly Story,” a musical tribute to the life of a rock pioneer who died in a plane crash in 1959. He was 22.

Holly was an influence for bands including The Beatles and The Rolling Stones and solo greats including Bob Dylan and Elton John.

The show focuses on Holly’s career as he quickly races up the rock ’n’ roll charts with hits like “Peggy Sue” and “That’ll Be the Day” before his untimely death.

“He was a genius musician,” said Suzanne Agins, the director of “Buddy” for CFRT. “It really showcases 18 months of his life from the rise to fame, the early struggles that go along with it, the passionate whirlwind romance and the music.”

Agins is no stranger to the Cape Fear Regional family, having also directed the musicals “Mamma Mia,” “Memphis” and “Dreamgirls.” The show was supposed to be part of the 2019-20 season before the theater went dark during the height of the COVID pandemic.

“This is the first show in this time slot since ‘Mamma Mia’ in 2019,” said Ashley Owen, marketing director of the theater.

Agins said the show is a perfect season opener filled with dance-worthy and passionate rock numbers performed by an “amazing” cast.

“This cast is multitalented. It is full of joy, energy and life and just jam-packed with music. The audience will recognize more than they think,” said Agins.

Agins said the performers play their own instruments, including the drums, guitar, bass and even an accordion, as they sing 32 songs.

“The musicianship is extraordinary. The actors are all singing, they are playing instruments. Everything is real,” said Agins.

Randy Davis is the choreographer for the show; James Dobinson is musical director.

Fresh off two national tours in the title role, Keaton Eckhoff will make his Cape Fear Regional debut as Buddy Holly, a character he has played for the past three years.

“He had a meteoric rise to fame,” Eckhoff says of the rock star. “This show explores his relationship with The Crickets and with Maria Elena, who he proposed to after a few hours. It’s such a great show with a lot of great music.”

Eckhoff said this is a larger cast than on the national tours and the choreography of fun dance moves helps make the show a true three-dimensional musical.

“It really captures who Buddy Holly was,” said Eckhoff.

Cast member Tishmone’ who plays Marlena at the Apollo and also performs in the ensemble, agrees that the show will feel personal to the audience.

“It is a musical but feels like a live tour. It’s a clear experience of what it is like to be on tour. It’s the actual ups and downs of being a live musician,” said Tishmone’.

The actress, who also appeared in “Dreamgirls,” “Memphis,” “Mamma Mia” and “The Color Purple,” said the audience will see something special in the context of the music.

With a cast filled with local favorites and returning stars, “Buddy” is certain to have fans on their feet and singing rock ’n’ roll favorites well after the curtain goes down.

“His life ended tragically, but the show ends with a dance party. The audience will feel the connection to his life. It’s one big concert,” said Agins.