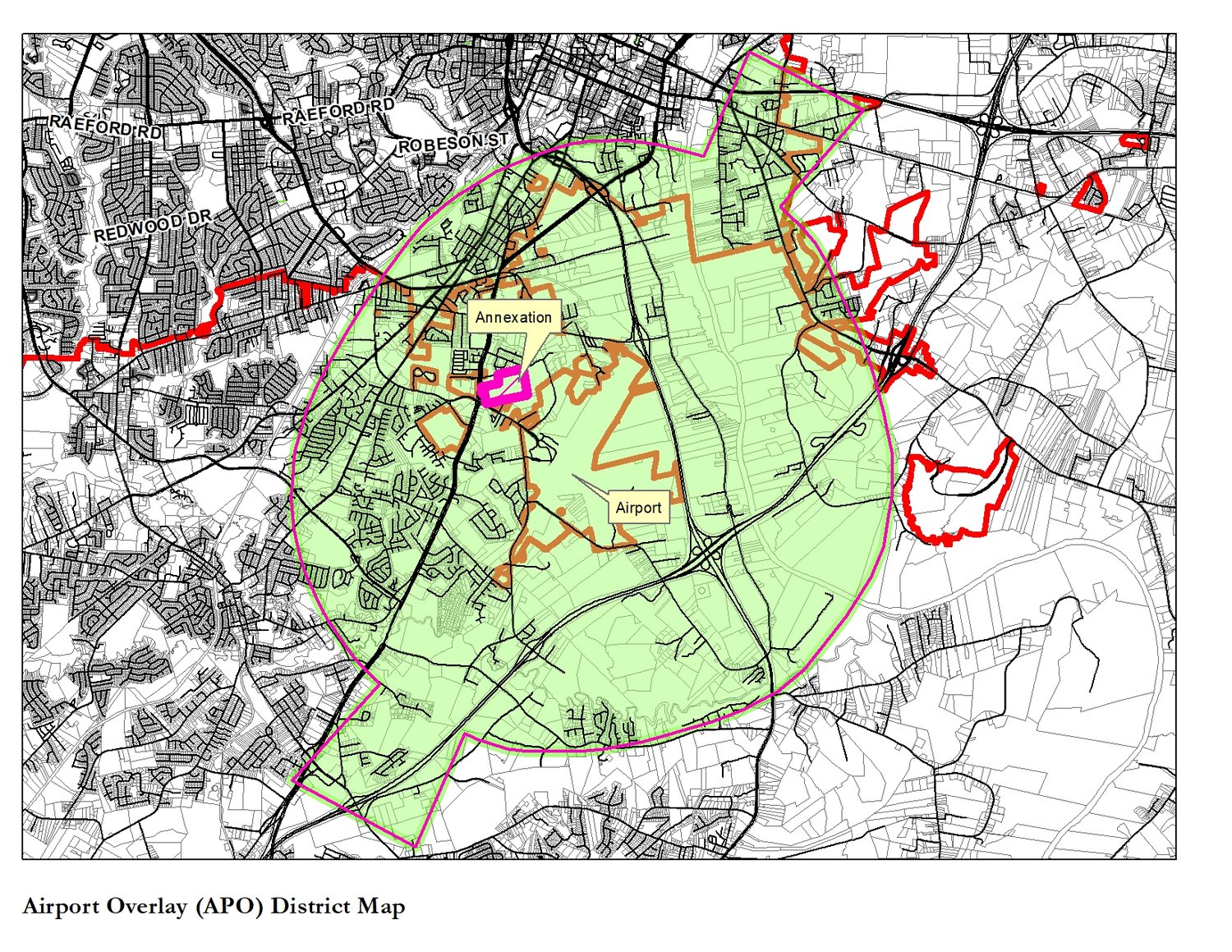 The Fayetteville City Council has narrowly rejected a plan for a 237-unit residential neighborhood on land beneath a primary flight pattern for Fayetteville Regional Airport.
City of Fayetteville photo 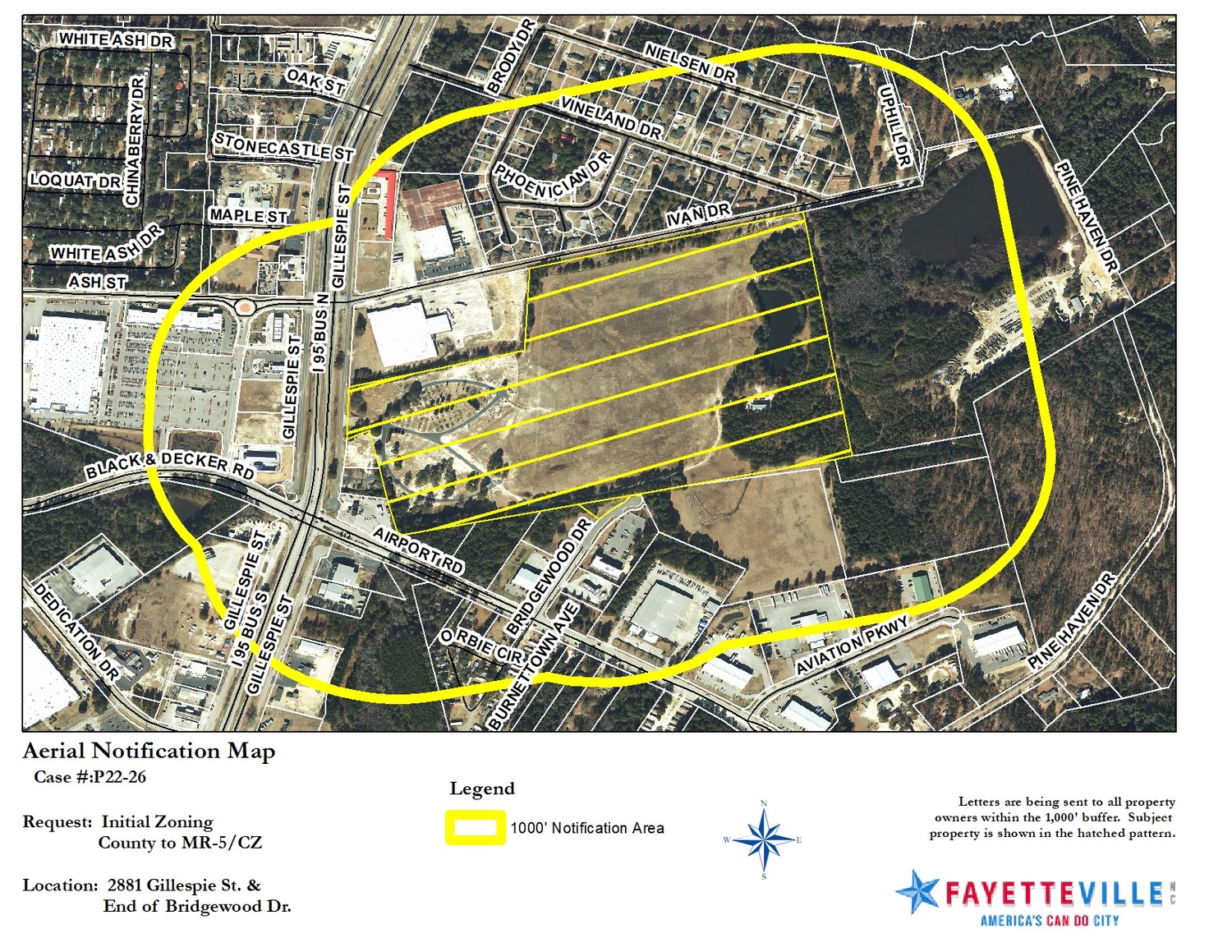 The Fayetteville City Council has narrowly rejected a plan for a 237-unit residential neighborhood on land beneath a primary flight pattern for Fayetteville Regional Airport.
City of Fayetteville photo
Previous Next
Posted Tuesday, October 4, 2022 12:28 pm
By Michael Futch | Staff writer

The Fayetteville City Council has narrowly rejected a plan for a 237-unit residential neighborhood on land beneath a primary flight pattern for Fayetteville Regional Airport.

Airport Director Toney Coleman had opposed the plan as an “incompatible land use” under development rules for the airport overlay district designed to protect the public from noise and aviation hazards.

The City Council voted 6-4 on Sept. 26 to deny a request for additional zoning of the property from the developer, Next Chapter Neighborhoods. The owner of the property is the Breece family, who also own Rogers and Breece Funeral Service.

Jonathan Charleston is the lawyer representing the developer.

The 50.12-acre property is off Gillespie Street in the Fayetteville Regional Airport overlay district. It’s an area that the airport director says falls under a flight path where student pilots often fly.

City Senior Planner Craig Harmon told the council that the property is located at 2881 Gillespie St. He said the request was for a zoning change from mixed residential to multi-unit, single-family detached residential.

Currently, the land is under Cumberland County’s jurisdiction, according to Harmon. The developer was asking that the city annex the property so that the homes could have city water and sewer service.

To the north is a single-family neighborhood, Harmon said.

“Originally, this is a site plan that had been submitted for 300 units,” Harmon told the council. “However, … (they) now want to go forward … with a revised site plan and request for no more than 237 units — so, a reduction of 63 units over what had previously been part of their condition.”

The airport overlay district “is a pretty big area,” Harmon said, adding that planes sometimes taking off tend to make a left turn that would bring the aircraft back over the proposed housing area.

“An amendment to the future land use plan would be appropriate, they felt, for this proposed change in use,” he said.

The city Zoning Commission, he noted, approved the plan, seeing no other factors that would substantially affect public health and safety.

Charleston said the developer, Next Chapter Neighborhoods, is interested in building single-family rental houses. As presented in a short video, the neighborhood would feature picket fences, sidewalks, “first-class, resort-style amenities,” and places for family and friends to gather.

The landowners have owned the property since 1983, he said.

Charleston reminded the council that the city is 20,000 units short in available housing, which mirrors a national housing problem.

“I call this detached multifamily, the latest trend in housing in the United States,” he said. “Built-to-rent housing has become very important because so many different categories of folks don’t want to own houses.”

The owners, he said, want to develop the property to its highest and best use.

“This property can be developed under the county right now,” Charleston told the City Council.

“What you will hear from the airport is that the land is not safe for the airport,” Charleston said. “That is simply not the case. (Airport) Impact Zone 6 is appropriate for low-density dwellings. That’s what it says in everything submitted by the airport.”

That zoning would typically allow one to four units per acre, he said. But it also would be appropriate for as many as 100 people per acre if it’s not designated residential.

Mark Lynch, who attended the hearing, spoke in opposition to the plan.

“It’s a great project,” he said. “Only it should be great somewhere else.”

Lynch said if an aircraft has engine failure, “you’re going to have a crash right there. I’m not here to put down the concept of new housing, but we need to consider the safety of our citizens.”

Coleman, the airport director, said the property in question falls under a flight path where student pilots often fly, as well as passenger, commercial and military aircraft.

Coleman told the council in a written response to the plan that the 2045 Metropolitan Transportation Plan says: “Land uses such as industrial development, warehousing and distribution shall be the preferred development activities on lands influenced by airport impacts.”

The transportation plan was developed by the Fayetteville Area Metropolitan Planning Organization.

He said the purpose of the Airport Overlay District is to protect public health and safety on land near the airport by minimizing noise and safety concerns “and to encourage future development that is compatible with the continued operation of the airport and the economic well-being of the county.”

Councilman Thompson asked whether people who build homes there are told that the land is in an impact area.

Councilman Dawkins said the City Council should reconsider its vote on the developer’s request.

“If we turn this down, it could be 343 homes” that would be approved by the county, he said. “We’ve got no recourse from this. I think council needs to reconsider its vote."

“The county should not do this either,” Benavente said.