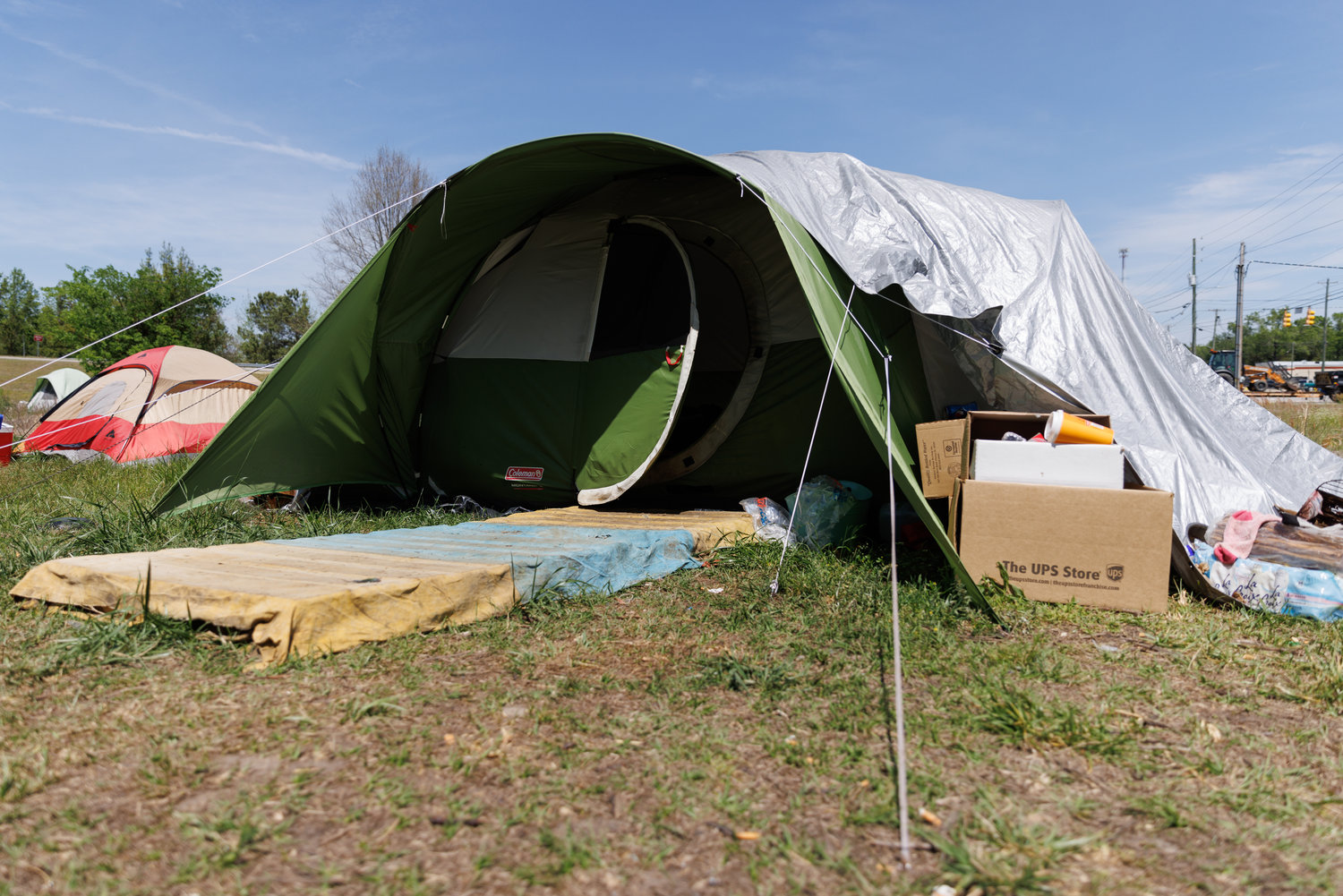 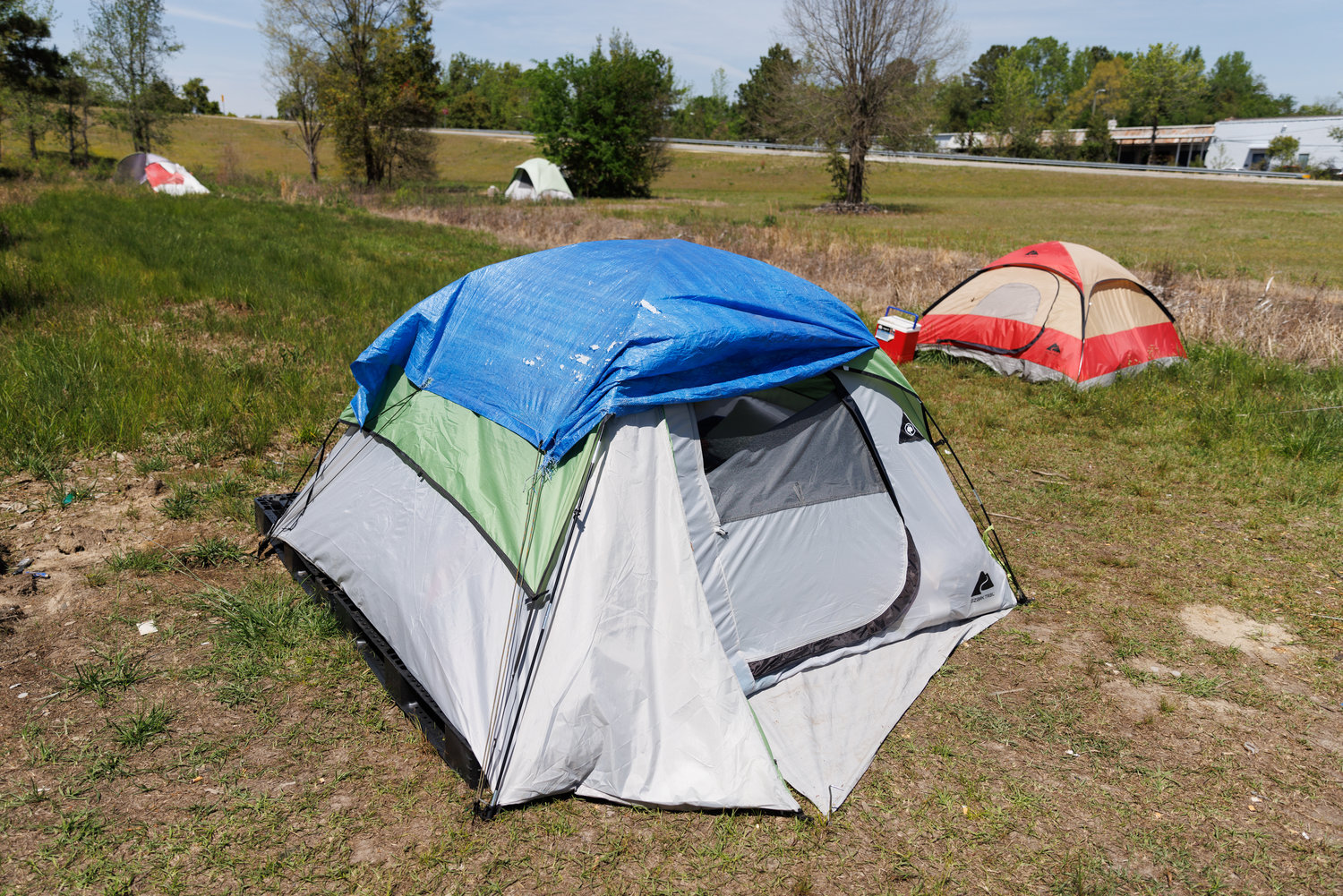 This photo from April shows tents set up near Gillespie Street and the Martin Luther King Jr. Freeway. It is one of several encampments in Fayetteville.
File photo
Previous Next
Posted Saturday, August 6, 2022 2:17 pm
By Michael Futch | Staff writer

During a work session this past Monday, the council by a consensus of 8-2 decided to move forward with a revised city ordinance on camping on public property inside the city limits.

The proposed ordinance is on the council's consent agenda for its regular meeting Aug. 8 at City Hall. The meeting is scheduled for 7 p.m.

The issue of homelessness — and what to do about it — is one the city has worked to address for a number of years.

More recently, the issue has involved those who sleep in encampments in high-risk areas such as near roadways on public and private property and under bridges in the city.

The recommendations in the proposed ordinance address those who camp on public property. Council opted not to make a decision on proposed recommendations for camping on private property at this time.

Brook Redding, an assistant to the city manager and special projects manager for Fayetteville, gave the presentation on the proposed ordinance to the City Council.

The current city ordinance defines camping as “a place where tents, huts or other temporary shelters are set up.” The existing regulation prohibits overnight camping at parks and cemeteries, but it leaves other venues open. It does not prohibit camping on private property or other city-owned property, Redding said.

In June and July, a city task force met with members of the Continuum of Care, the lead agency for planning and coordination of homeless activities in the county, for their input.

The council was presented with three proposals during its work session. Of those, members agreed on the terms with the least limiting camping recommendation. Under that proposal, camping is prohibited when there is overnight shelter available in the city and when it presents a public health and safety risk, regardless of shelter availability.

“This, at a minimum,” Redding said, “would give us a legal basis needed to execute" enforcement of the ordinance.

The council also was presented with proposals that were moderately limiting and were most limiting regarding camping.

Redding said the task force recommended the most limiting proposal.

Under that proposal, camping or sleeping in a vehicle on public property is prohibited when there is:

– When it presents a public health and safety risk, regardless of shelter availability;

– Erecting or constructing a tent or laying down bedding between 8 a.m. and sunset.

The most limiting, he said, would “address several of the layers of issues the city is encountering right now with unsheltered homelessness.”

Redding said the staff recommendation on private property suggests that the components that are there now should remain in place.

In that case, camping is prohibited unless:

– An individual is camping on his own land;

– An individual is camping with the written consent of the landowner;

– An individual is camping no more than seven consecutive days without an interruption of three months of non-camping days.

Councilwoman Yvonne Kinston asked Redding if current services include overnight availability for men, women, a woman and child, and a man and child.

“In the city, there is availability,” he said. “On average, our current services are never at capacity. Usually, they’re not even 50% occupancy.”

Councilwoman Shakeyla Ingram proposed that the homeless find a “safe space” in the Salvation Army parking lot when that agency is at capacity and no other homeless services are available.

“We cannot dictate what Salvation Army allows on its property,” Redding said.

Later, the council agreed to talk with the Salvation Army regarding Ingram's idea.

Mayor Mitch Colvin said homelessness has been an issue for cities statewide.

“Certainly, we want to balance being sensitive to those in our community who are in this situation to have some structure with the public good,’’ he said. “By all the shelters that we support, they have certain rules and barriers to get in. No drink and drugs for that particular night.

“By us looking the other way and not doing anything really is circumventing the effectiveness of those shelters because it gives people an option if they don’t want to comply with some of that," Colvin said. "We know that nothing we can do tonight or even follow up is going to be a one-all, fix-all. But I think if we continue to look away, those communities are growing …”

When it comes to public space being used for camping, he noted, Fayetteville is one of the few cities that does not have any type of public camping ordinance or a very limited ordinance compared with municipal peers of comparable size.

The mayor said the city also is talking with the N.C. Department of Transportation regarding the homeless who camp on its property inside the city.

Many of the homeless in Fayetteville camp on DOT property.

For several of the candidates in the city’s recent municipal election, homelessness was cited as a major campaign issue.

It’s an issue that has repeatedly come before the City Council over the last 10 to 15 years. At one point, the city laid out a 10-year plan to eradicate homelessness in the city.

As the mayor has said in the past, homelessness will never be completely resolved here. But the council is making strides to put a serious dent into the situation.

Over the past few years, the council has authorized what the city calls “some transformational initiatives” in hopes of reducing homelessness in the community.

There are roughly 475 or more unsheltered individuals who live in inexpensive motels, under bridges and in encampments around town and in the county.

The city supports homelessness initiatives through partnerships with community organizations and Cumberland County.

Those initiatives include the city’s purchase of a facility for a homeless day resource center at 128 S. King St., which has been designated to provide “a community resource hub for persons experiencing homelessness.”

The center is expected to be brought online in the spring of 2023, the city has said.

In February, through a partnership with Manna Church, the city opened the Manna Dream Center men’s shelter on Person Street. For overnight guests, the Dream Center can accommodate up to 20 people.

The shelter has been open since December.

At the same time, Cumberland County is moving forward on a proposed homeless  shelter and on a homeless strategic plan.

The Salvation Army also provides beds and food for men, women and families who have fallen on hard times.

During Monday's work session, City Manager Doug Hewett said the council is now “looking to see how far or how little the council would like to move up or down. … If it presents a public health or safety risk regardless of availability, that will allow us to be able to go into some of these situations that we saw where people are close to the road. And we have offered them services repeatedly.

“That is what will help us when people are risking their life and other people’s lives by living under a bridge, starting fires under a bridge. Again,” Hewett said, “it’s not saying that they (don’t) count, but that becomes a risk for themselves or the public, and they would have to move from that location. If they did not, then this would give us tools to do that.”

Council members then gave an 8-2 consensus approval for the least limited proposal, with Kinston and Councilwoman Courtney Banks-McLaughlin opposed.

Redding said the ordinance would level the field and create a legal basis to adjudicate, if needed.

As a result, he said, the proposed ordinance would drive the city’s unsheltered homeless toward services. They would not be required to participate in those services if they didn’t want to, he said.

“But if they are in an environment that is at-risk or at-risk to the public at high-risk,” Redding said, “they can’t be there. That is what this is speaking to.”