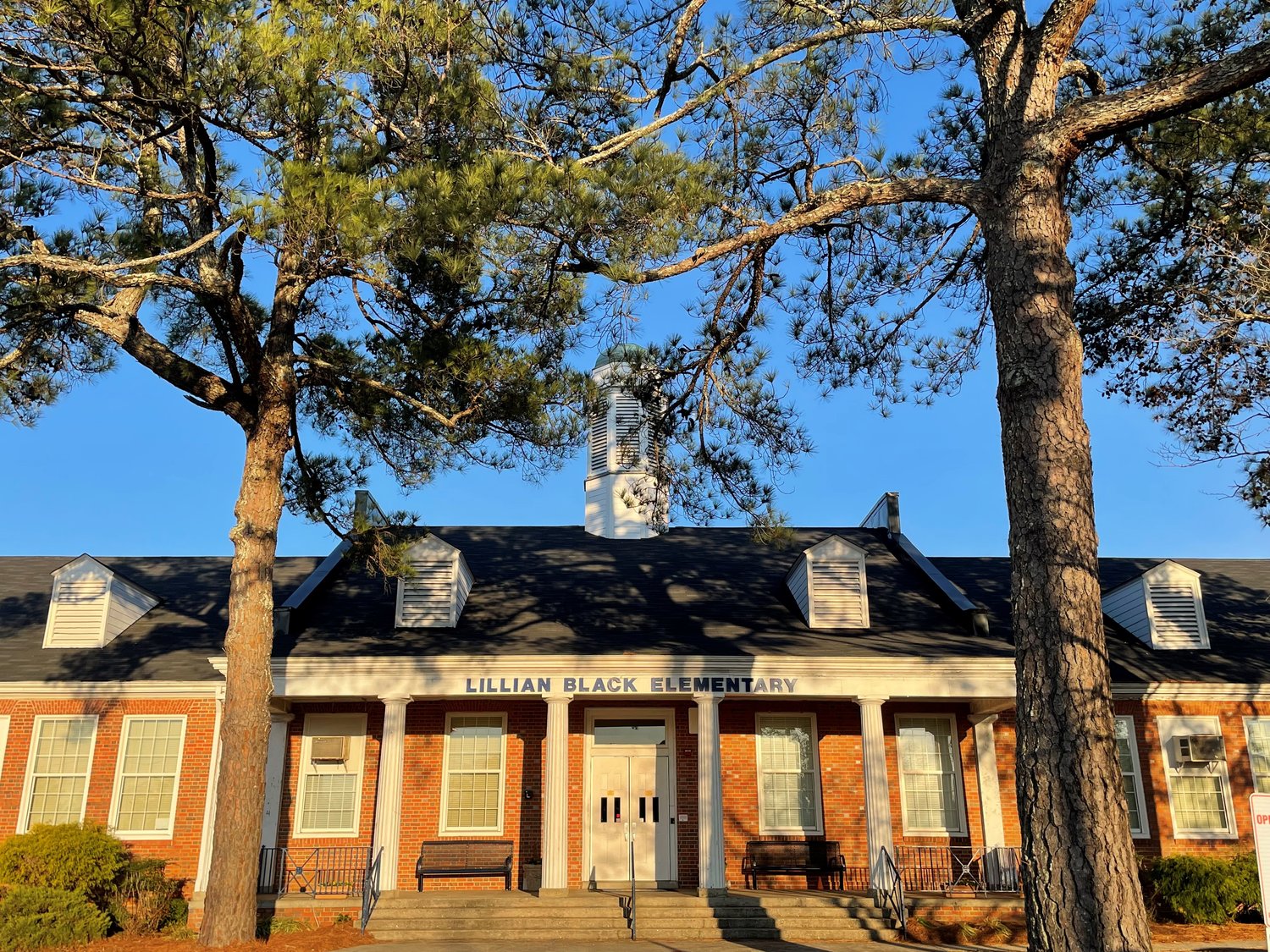 Lillian Black Elementary School in Spring Lake would close under some of the preliminary student reassignment options being considered by the school system.
Photo by Jami McLaughlin
Posted Wednesday, January 26, 2022 5:06 am
By Michael Futch | Staff writer

The meeting focused on families who have children who attend or would be attending Lillian Black, W.T. Brown and Manchester elementary schools in the 2022-23 school year.

Parents and teachers were among the roughly 35 people who attended the meeting. Others watched it online.

The school system scheduled three forums throughout the community to gather input from the public. The Cumberland County Board of Education is moving forward with the possibility of closing T.C. Berrien Elementary School.

Currently, 178 students live in the student assignment area and would normally attend T.C. Berrien Elementary in kindergarten through 5th grade. Those students are now taking classes at W.T. Brown.

District leaders shared the four proposed preliminary student reassignment target areas with members of the board during a Jan. 4 Auxiliary Services Committee meeting. However, before moving forward with actual recommendations, the schol system is holding the forums to hear from the community.

The reassignments would begin this fall.

The three proposed reassignment plans for Lillian Black Elementary School, which currently has about 175 students in kindergarten through fifth grade, include:

– All of Lillian Black being reassigned to W.T. Brown, which presently has 207 students and a student capacity of 665 students. As a result, Lillian Black would be closed.

– All of the Lillian Black Elementary School district, the southern-most portion of Manchester and T.C. Berrien (178 students) being redistricted to W.T. Brown.

Overall, this would require the movement of 431 students, the closure of Lillian Black Elementary and better utilization of W. T. Brown.

Samantha Nichols, 31, of Spring Lake, has a 6-year-old child, Ailey, who is in kindergarten. She has concerns that W.T. Brown, with a capacity of 665 students, would be nearly maxed out with the proposed reassignment plan.

“There’s not room if more people move here,” she said before the meeting got underway. “If they turn any students away, where do they go?”

Nichols also had a question regarding COVID-19 and how by adding more students to W.T. Brown, it only raises the threat of a child’s chances of contracting the novel coronavirus.

She said she would like to see Lillian Black – a historical and well-loved community school – remain open.

Crystal Ortega asked about the educational opportunities that have been touted by school officials should all the students be reassigned to W.T. Brown.

Joe Desormeaux, the associate superintendent of Auxiliary Services for the school system, said there’s a significant time frame for when the schools were built. W.T. Brown offers more program spaces that are a lot larger and better functioning than Lillian Black.

“Multi-purpose room areas …  your common areas, your core, spaces like the media center, your classrooms, allow more flexibility, the school operates more efficiently ... you have the ability to adapt your academic needs better,” he said.

“Special needs students should be just the same,” Desormeaux replied.

“Why are you shutting down a school of great uniqueness that offers a quality education to all those in Spring Lake,” she asked. “This serves as a beacon of hope and consistency. So please tell me why you’re closing down this little school that stands for so many for so many years?”

Applause rippled throughout the room.

“It’s great when a community falls in love with their schools,” Desormeaux said. “’Support is strong. Has a great culture going there. … Again, we go back to the fact that you have a facility that will provide you a lot better chance at educational opportunities here, OK, than Lillian Black.”

A capital improvement assessment of all the facilities in the district was conducted, he said, and Lillian Black fell into the top three for work that needs to be done.

“It’s in poor shape,” he said. “A lot of systems need to be replaced. We feel like with the fact there’s space available here (at W.T. Brown), an opportunity to provide even better educational opportunity, that closing Lillian Black is the best action and move those students over here and use this facility to our advantage.”

Clarence Hodges asked why it had gotten to this point if the building is in such bad shape. She said she attended the school in the sixth grade. This is her fourth year working at the school.

“The entire district has a large capital improvement need,” he said. “We did an assessment of the entire district and currently we receive about $10 million in capital, and about $8 million of that is used for facilities spread out throughout the entire county. We have over $530-some million work identified in all the schools throughout the county. Half the schools people can legitimately argue that they should be the number one school to be fixed, to be repaired. It is across the district.”

A major part of the school system’s strategic plan is to provide an exceptional learning environment for every student. After considering all the factors and after reviewing feedback from families in the community in earlier input sessions, the Cumberland County Board of Education decided it was best to close T.C. Berrien, one of the district’s smaller schools.

“Everybody should have access to 21st-century learning,” said schools Superintendent Marvin Connelly Jr., who was in attendance.

Another participant asked if it was a done deal that Lillian Black would be closed.

“The board could decide not to do anything right now,” Desormeaux said. “No decision has been made yet. That’s why we’re having these meetings.”