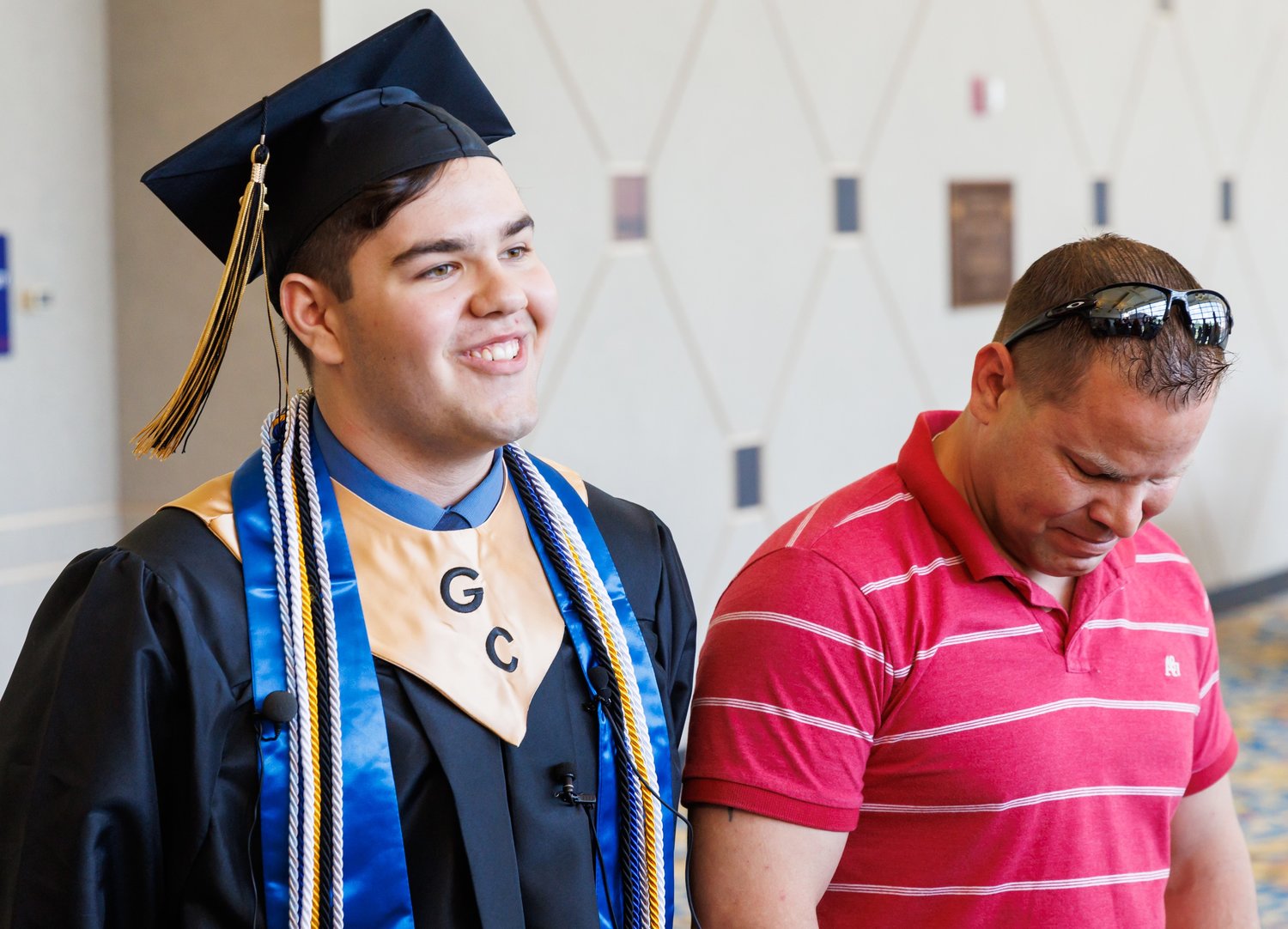 Alex Anderson said it was a big surprise to see his father, Sfc. William Dubnansky, at his graduation on Wednesday because Dubnansky has been deployed to Poland.
Photo by Tony Wooten 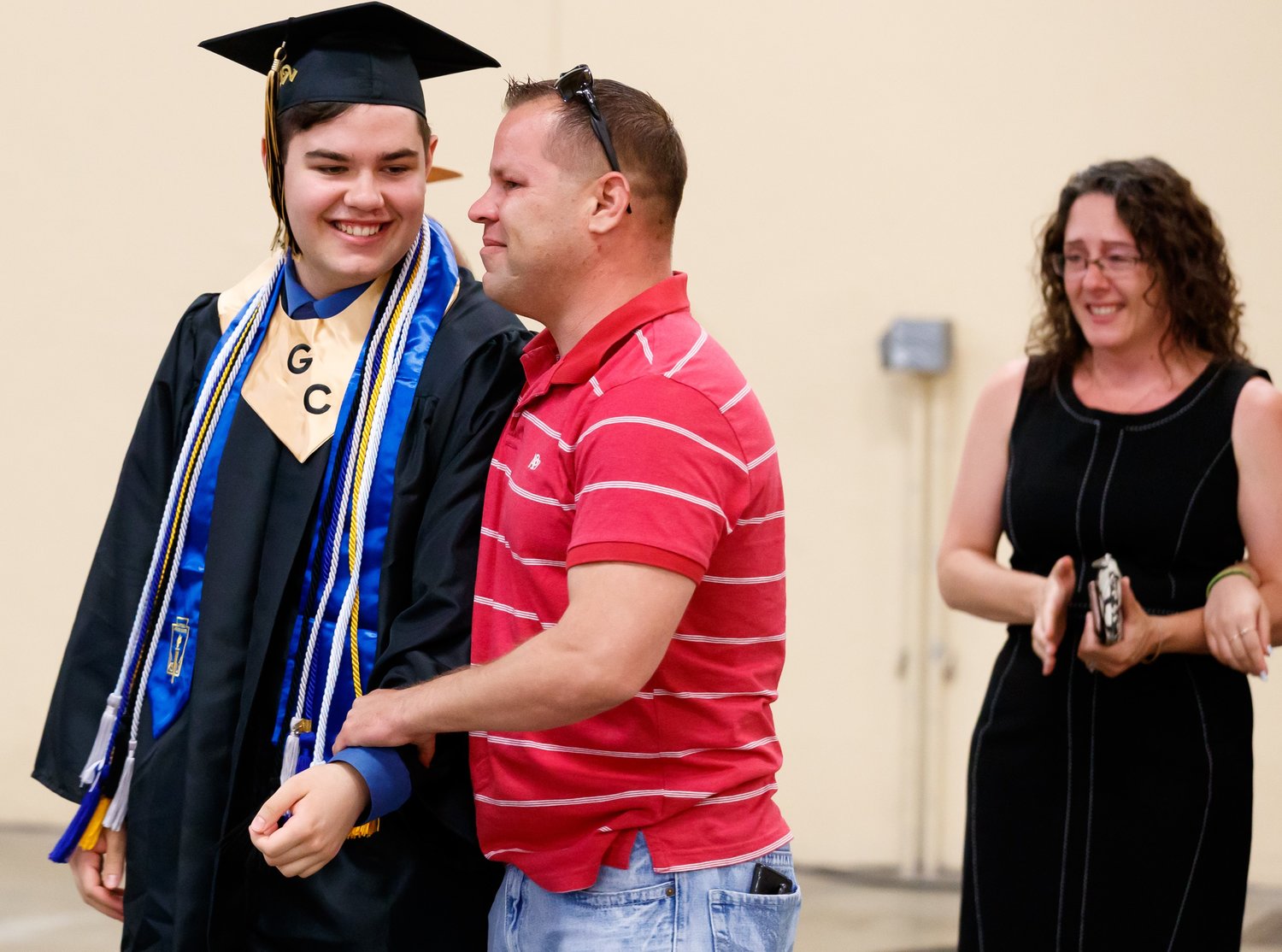 Army Sgt. 1st Class William Dubnansky surprised his son, Alex Anderson, when he came home from deployment in Poland to see him graduate from Gray’s Creek High School on Wednesday at the Crown Coliseum.
Photo by Tony Wooten 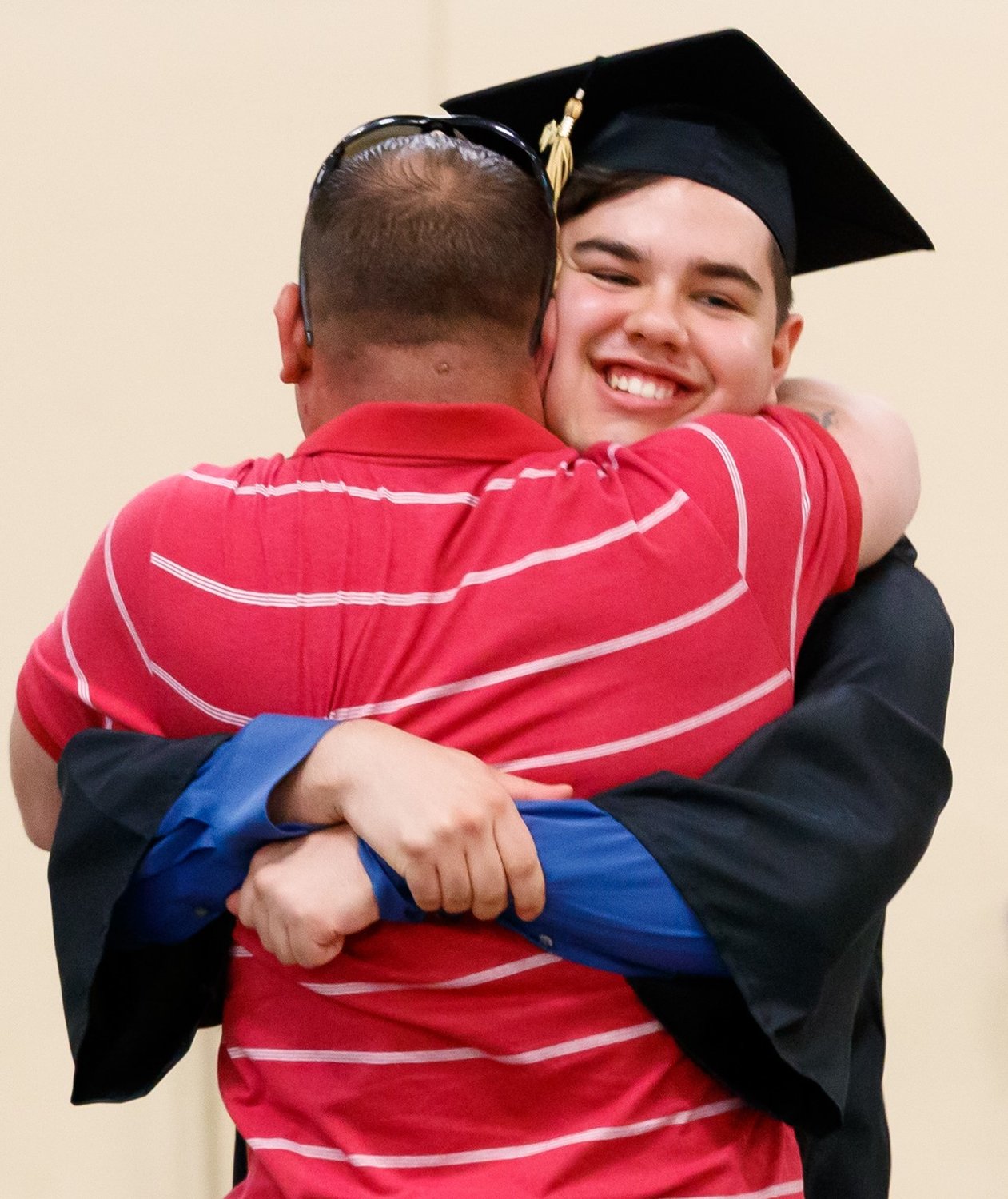 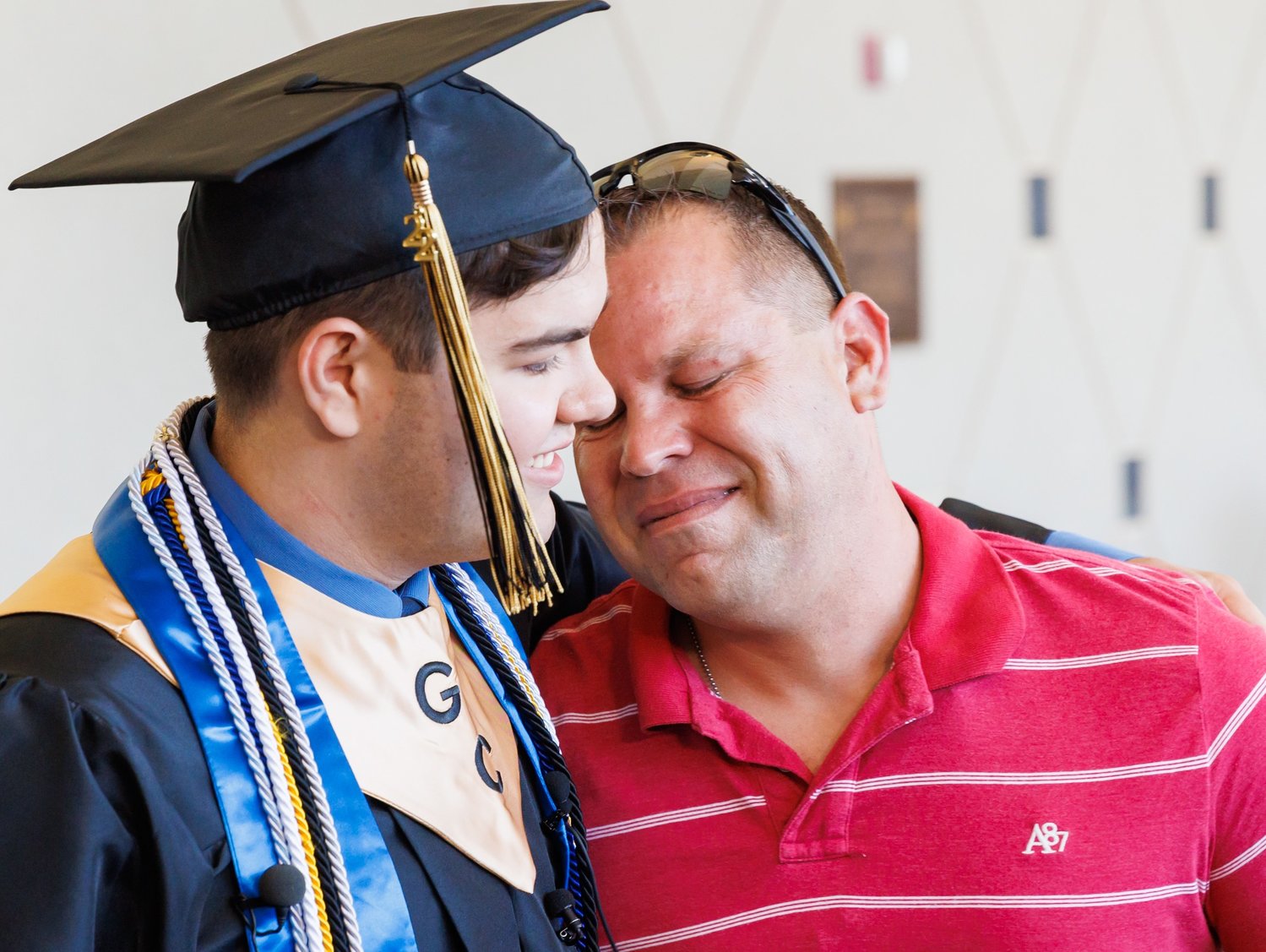 Army Sgt. 1st Class William Dubnansky's wife says she saw him cry for only the third time when he came home from Poland to see their son, Alex Anderson, graduate from Gray’s Creek High School.
Photo by Tony Wooten 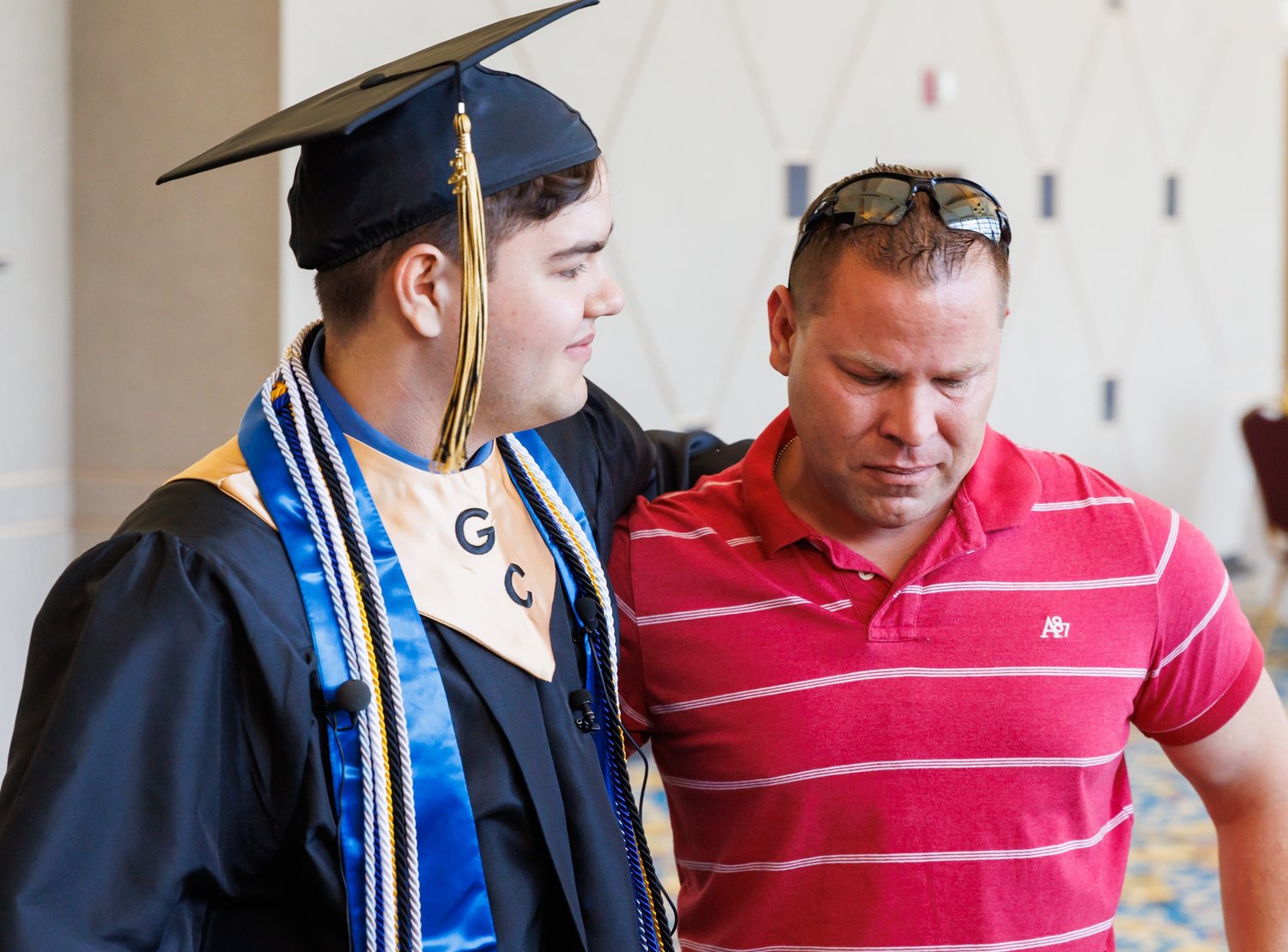 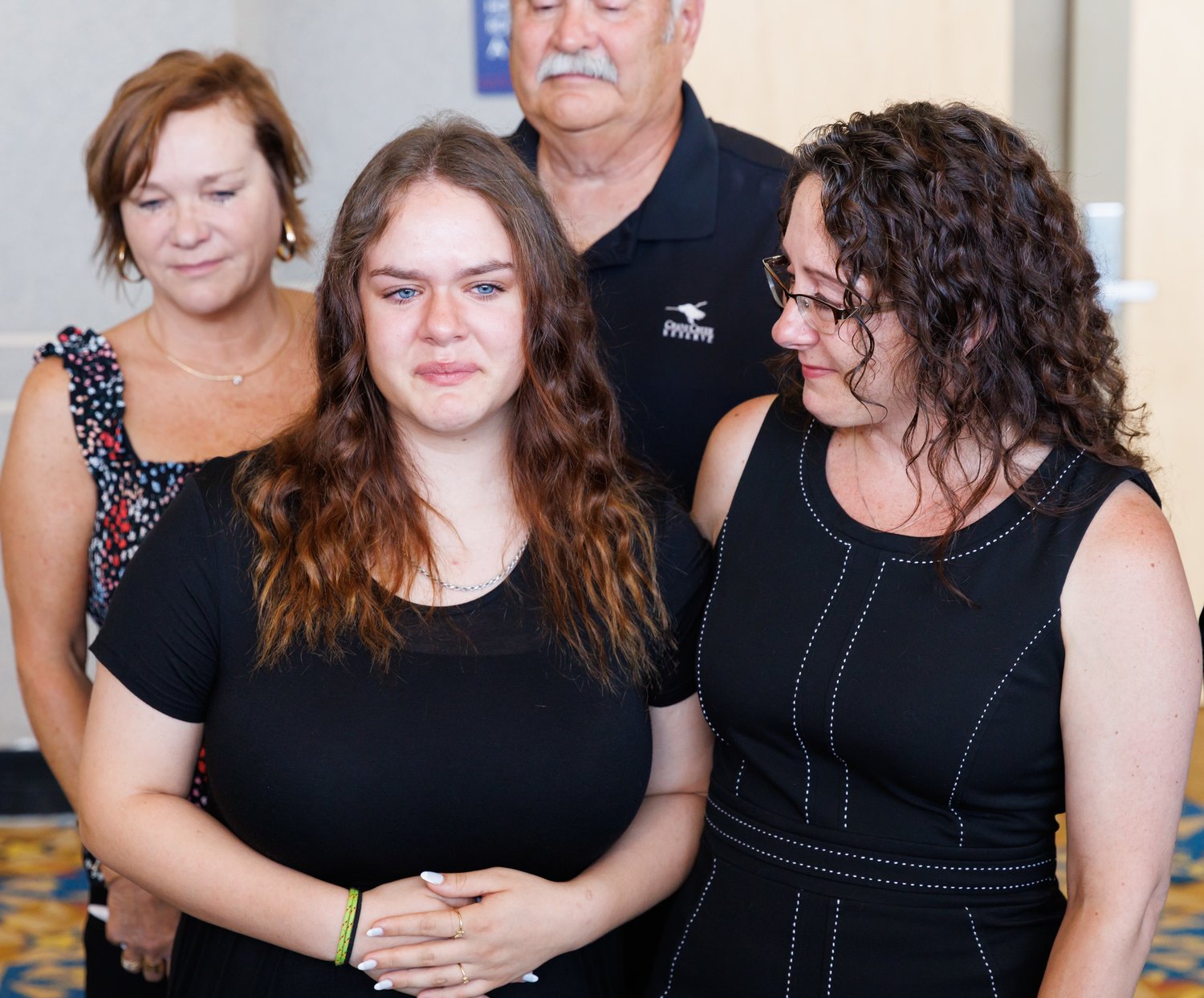 Alex Anderson's family, including his mother, Ariana Dubnansky, right, tear up after the reunion with Alex's father.
Photo by Tony Wooten 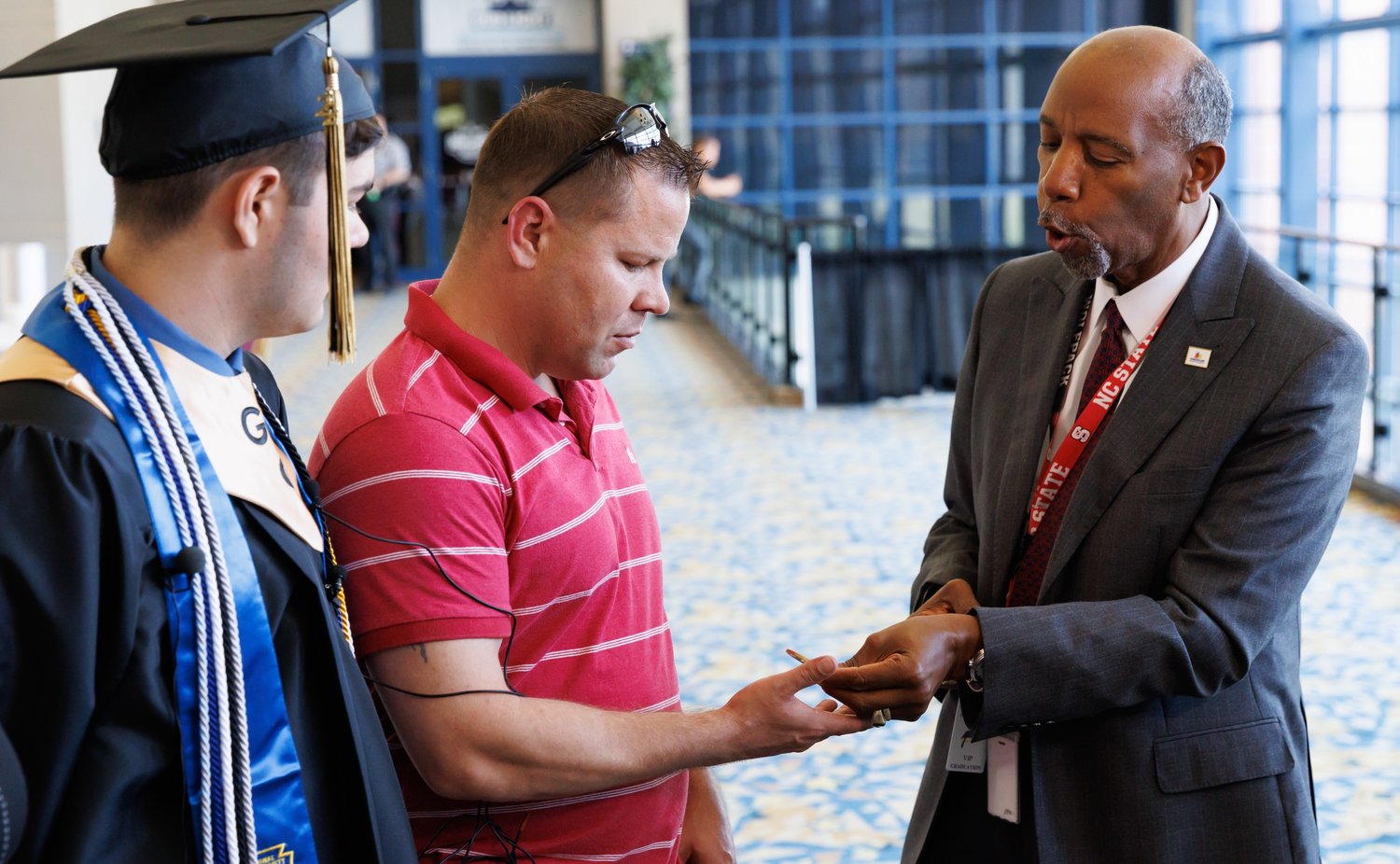 I thought I was going to miss my diploma, and then he walked in. It was great to see him. I missed him.”
Alex Anderson
By Michael Futch | Staff writer

Leading a small entourage of family into the assembly room, Army Sgt. 1st Class William Dubnansky scurried forward and immediately embraced his son in front of the Gray’s Creek High School Class of ’22.

The students roared in reaction to the father’s surprise homecoming.

Alex’s fellow graduates stood up and applauded as father and son continued to hug unabashedly. Alex, wearing his graduation cap and gown, kept his left arm draped around his father.

“My heart jumped. I wasn’t ready for it,” Alex told reporters later. “I thought I was in trouble for a second. You know, I thought I was going to miss my diploma, and then he walked in. It was great to see him. I missed him.”

Dubnansky, who is on his ninth deployment, was granted leave to come home from Poland to see his son graduate with the class of 273 seniors at the Crown Complex on Wednesday.

“I had no clue,” Alex said. “I had absolutely no clue. I thought he was going to be stuck over there (in Poland) with everything going on. I thought they were going to keep him over there and he wouldn’t make it. So it was really a good surprise to see him.”

He last saw his father early this year.

“I figured he would let me know if he was coming,” Alex said. “I never asked him. … I let him know everything that was going on with the graduation. I try not to ask too many questions."

Dubnansky has served in the military for more than 16 years. He is assigned to Fort Bragg's 82nd Airborne Division and attached to the 18th Airborne Corps as chief of munitions.

As a result of his multiple deployments, the 39-year-old Dubnansky said, he has missed a few milestones in his children’s lives. But he said nothing was going to stop him from seeing his son graduate from high school.

“It’s been tough, but I know he’s always there whenever I need him,” his son said. “And he always has my back, so it’s really good to have him here.”

Ariana Dubnansky, Alex’s mother, said before the father and son reunion, she had seen her husband cry only twice.

On Wednesday, she saw him cry for the third time.

“My dad’s not really an emotional guy,” Alex said as his father’s face crinkled with emotion. “To see him tearing up a little -- it’s really good to see.”

Dubnansky said the Army has taken care of him in so many ways.

“So they made this possible,” he said.

Keeping the reunion secret from Alex was difficult, he said.

“There were a lot of phone calls and text messages with my mother and my wife. It took some time, it took some doing, but we made it happen. This day is special.”

Dubnansky said his family let him hide out for a night at a Holiday Inn in Fayetteville. He met with his father, John Anderson, on Tuesday, and they had dinner together.

He said he’ll be returning to Poland as part of the buildup of NATO forces deployed to the region because of Russia’s invasion of Ukraine.

For Alex, having his father see him graduate was a gift.

“It’s a huge moment,” he said. “He’s been a huge part of my high school career -- picking me up when I’m down, making sure I get my homework done, keeping up with my grades. A lot of times with COVID, I wasn’t doing my best, wasn’t paying attention. He made sure to pick me back up and keep me focused.

“So it’s really important to have him here.”