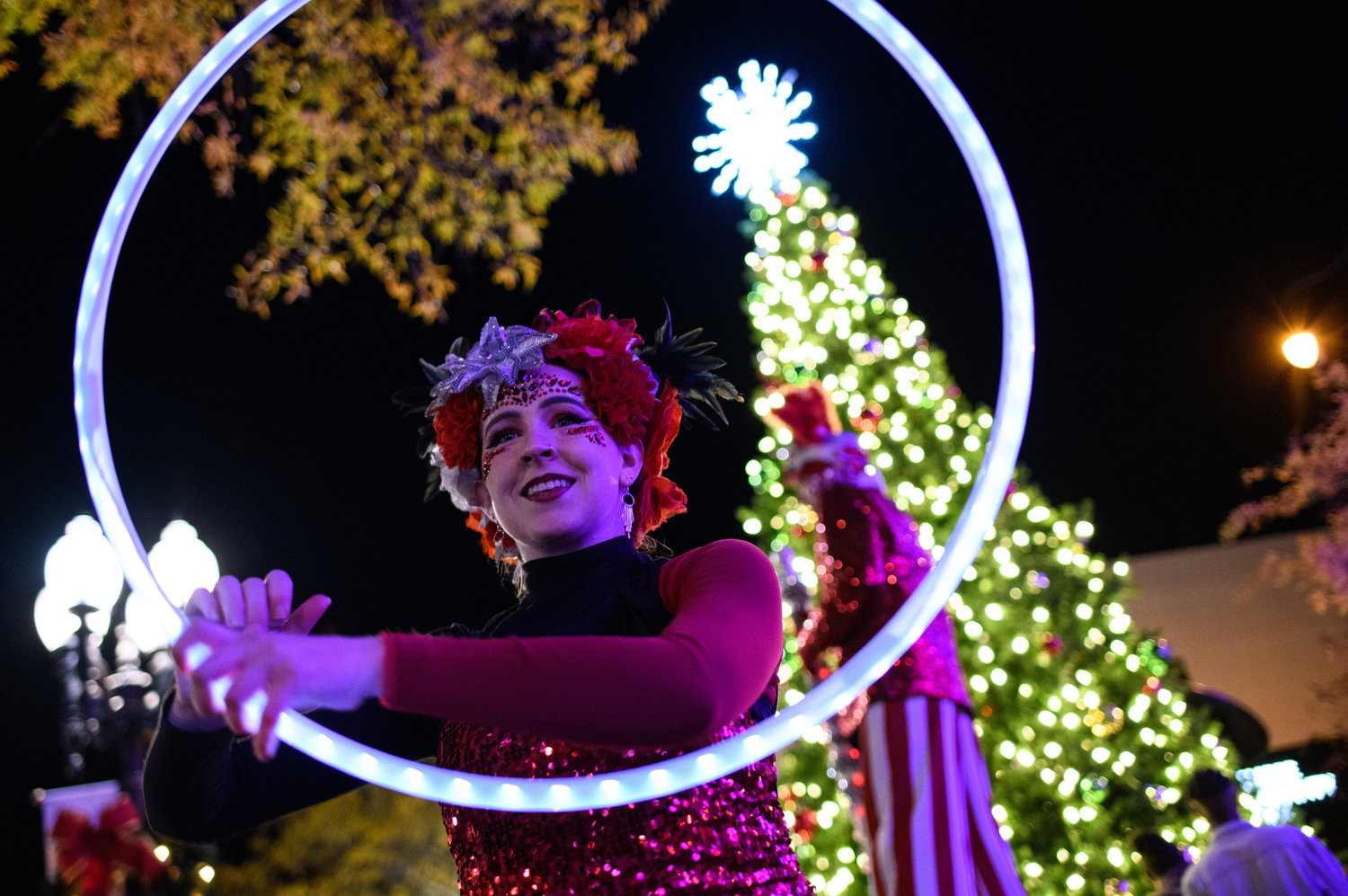 A performer for Imagine Circus performs with a hula hoop during Holidays on Hay on Friday in downtown Fayetteville.
Photo by Melissa Sue Gerrits 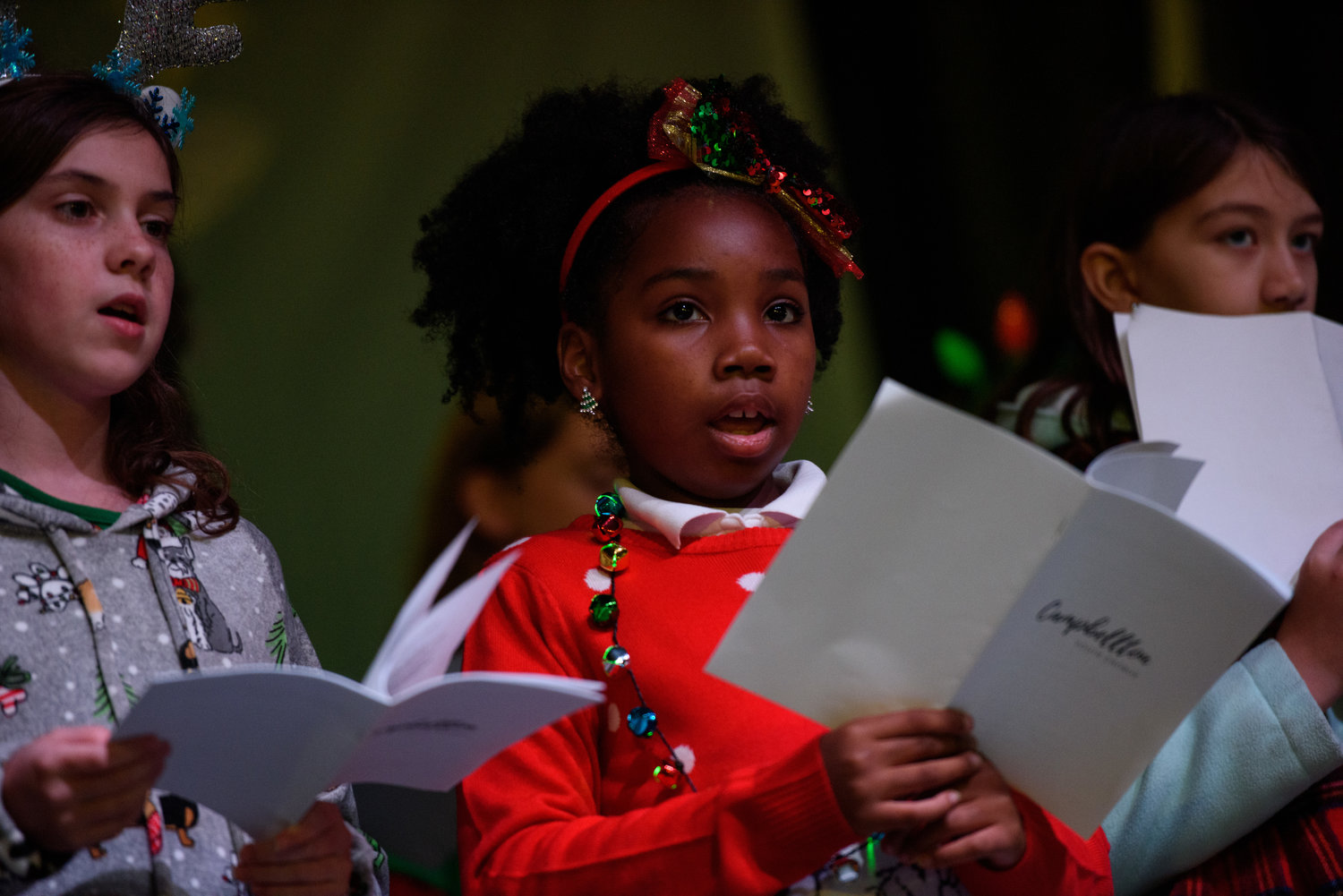 Children with the Campbellton Youth Chorus sing during Holidays on Hay held in conjunction with A Dickens Holiday on Friday in downtown Fayetteville.
Photo by Melissa Sue Gerrits 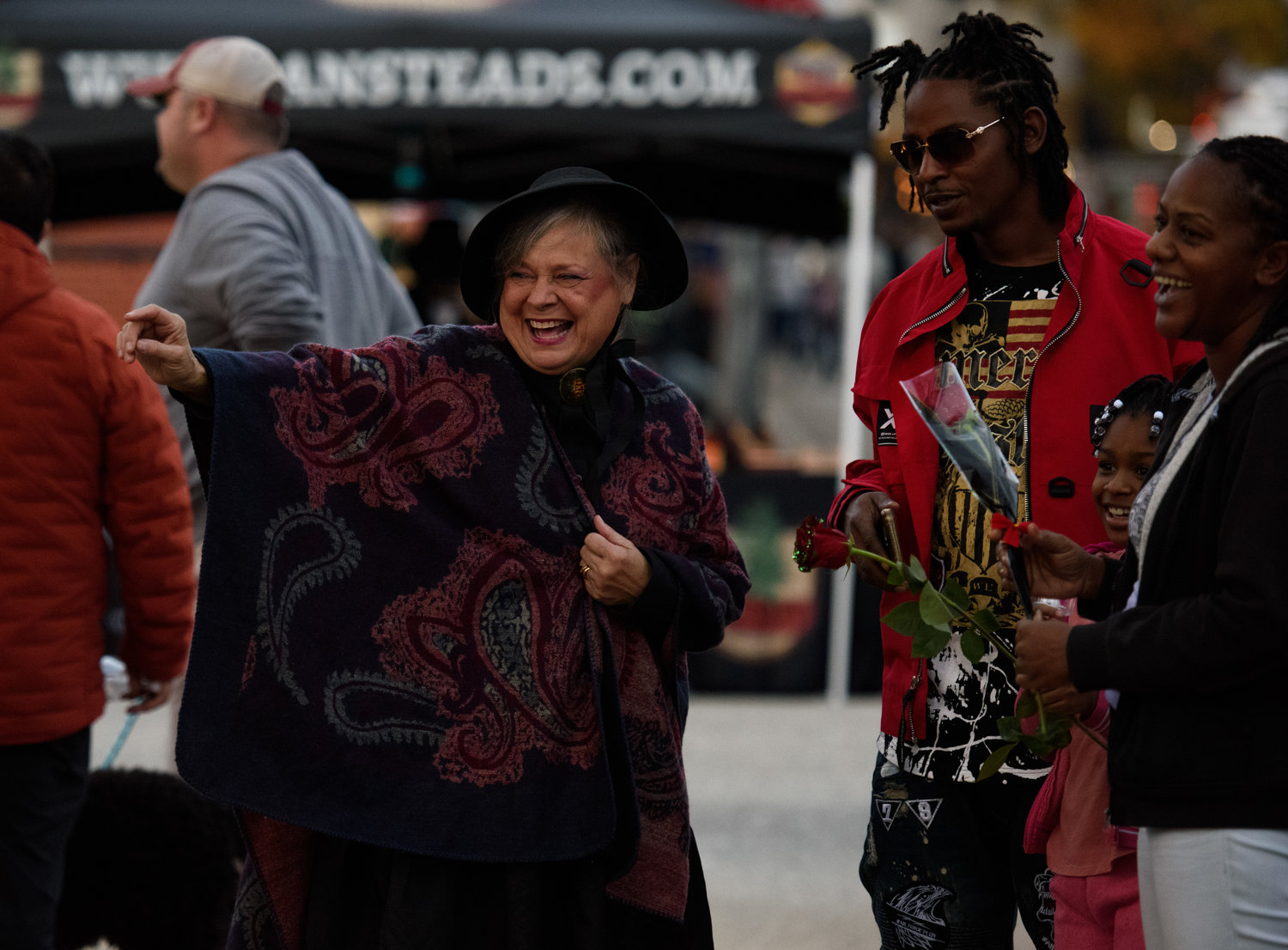 Rhonda Whaley, dressed as a London flower lady, directs friends to different attractions while the Holidays on Hay and A Dickens Holiday are held on Friday in downtown Fayetteville.
Photo by Melissa Sue Gerrits 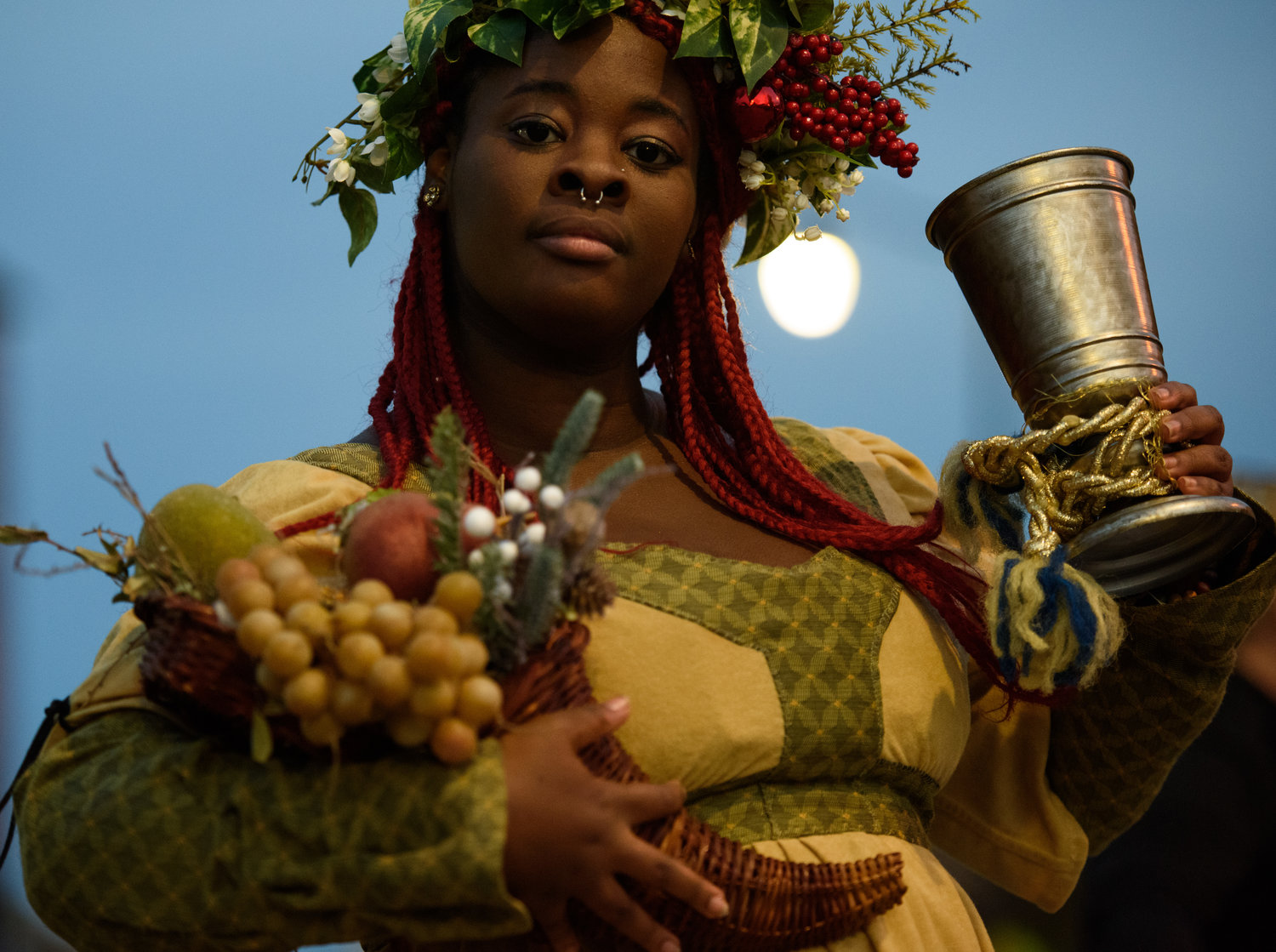 Vashti Parker, dressed as the Ghost of Christmas Present, poses for a photo while acting the part at A Dickens Holiday on Friday in downtown Fayetteville.
Photo by Melissa Sue Gerrits 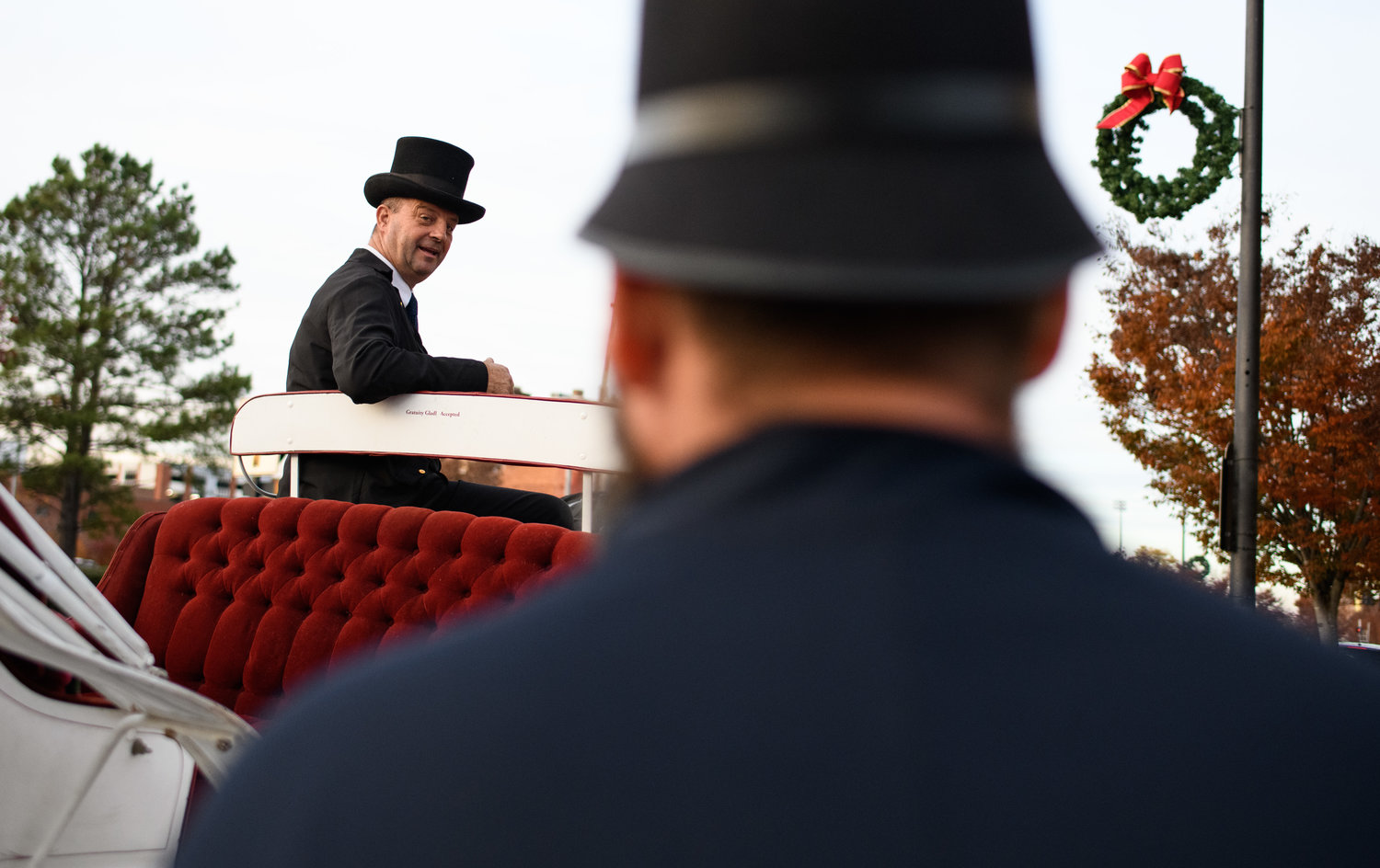 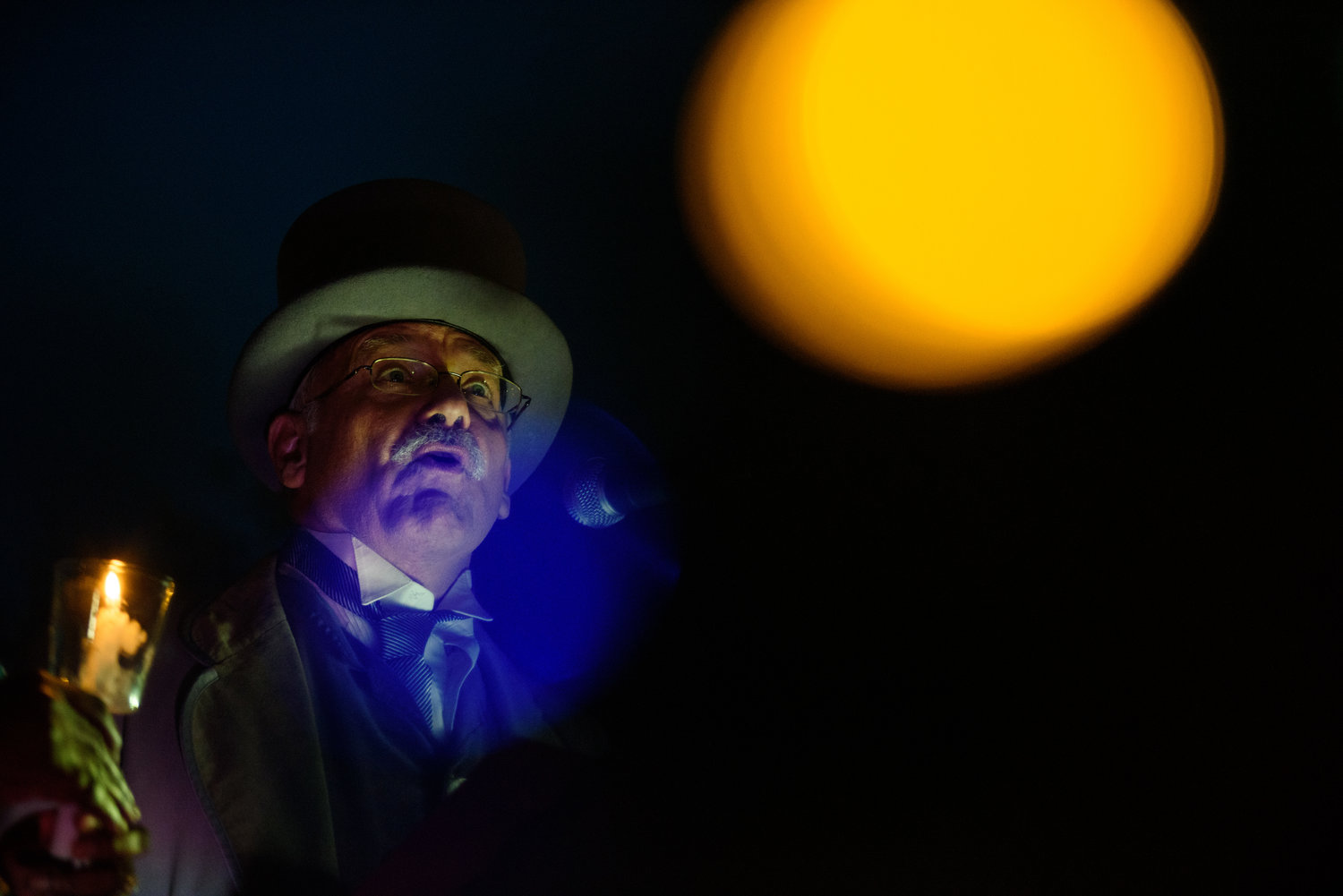 John Malzone speaks to the crowd during A Dickens Holiday held in conjunction with Holidays on Hay on Friday in downtown Fayetteville.
Photo by Melissa Sue Gerrits 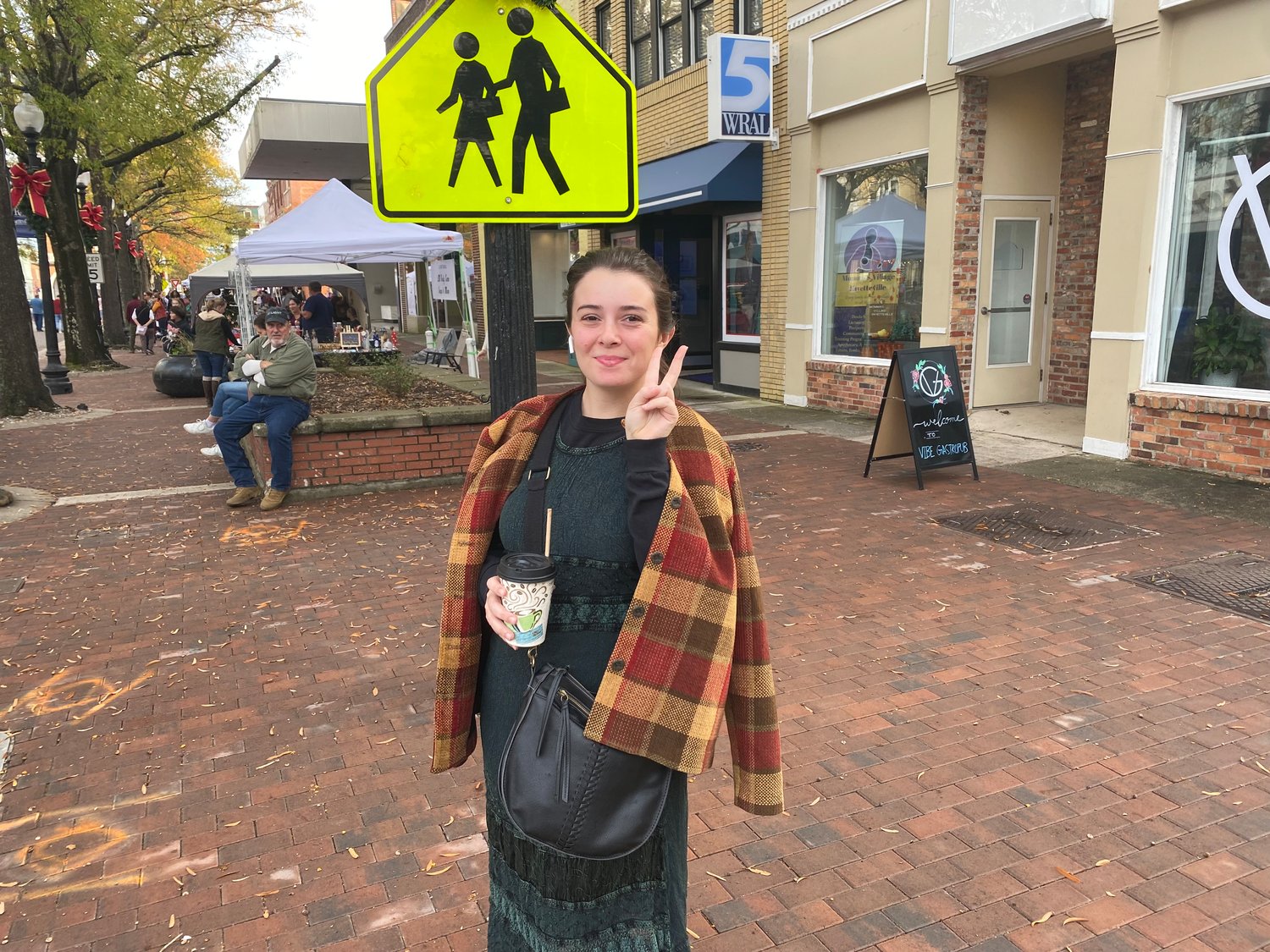 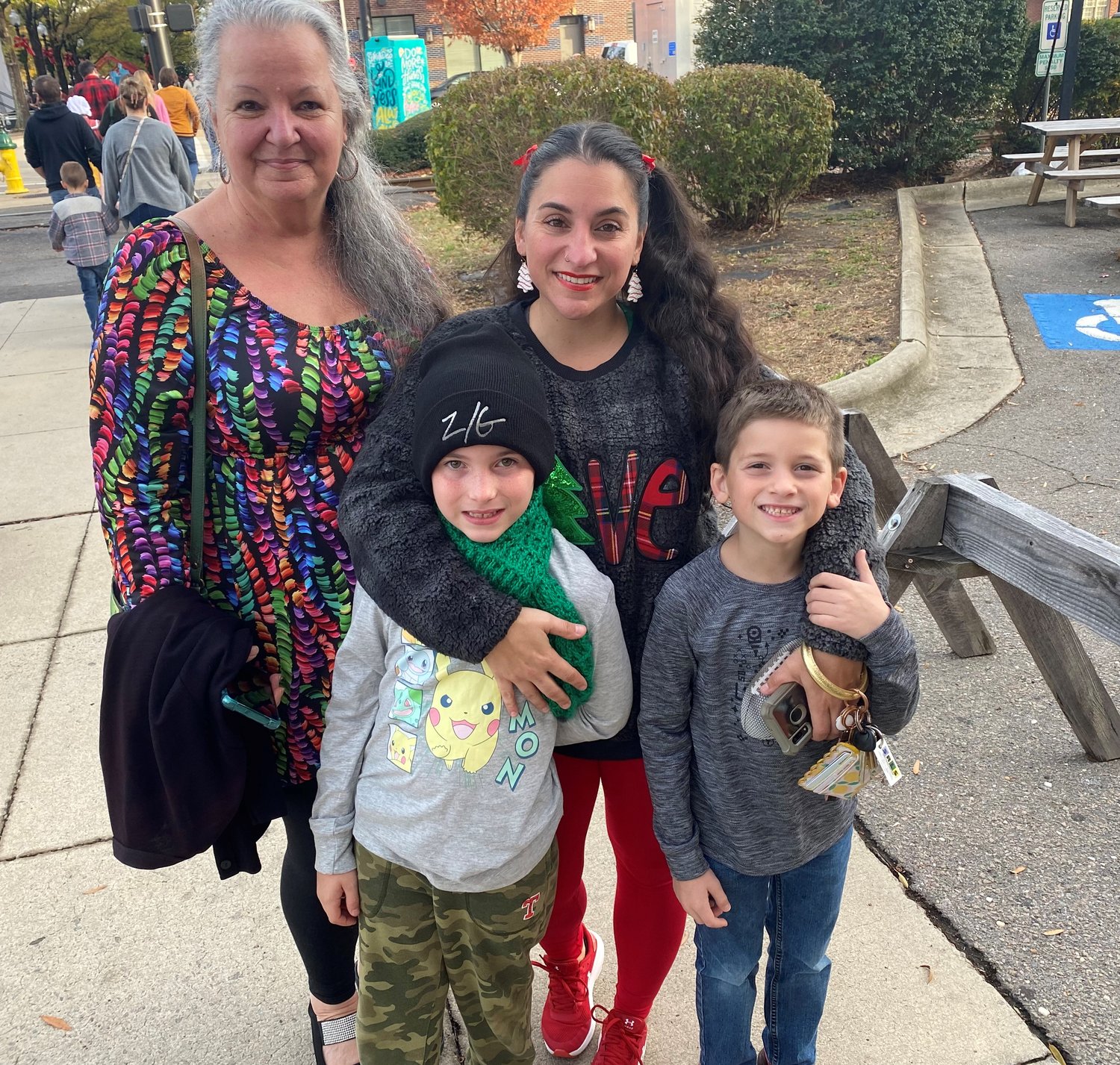 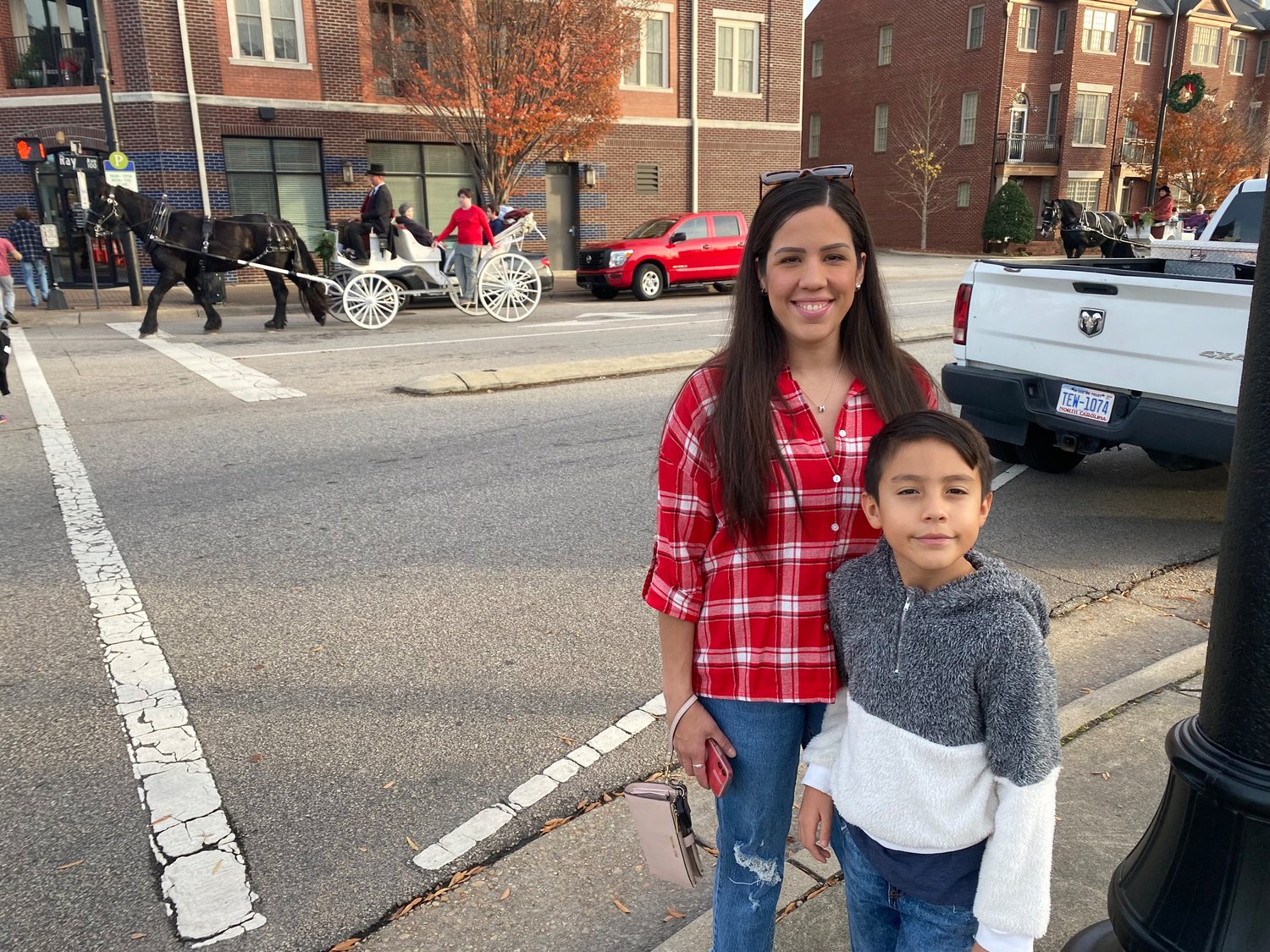 Monica Rojas and her son Fabian
Photo by Michael Futch 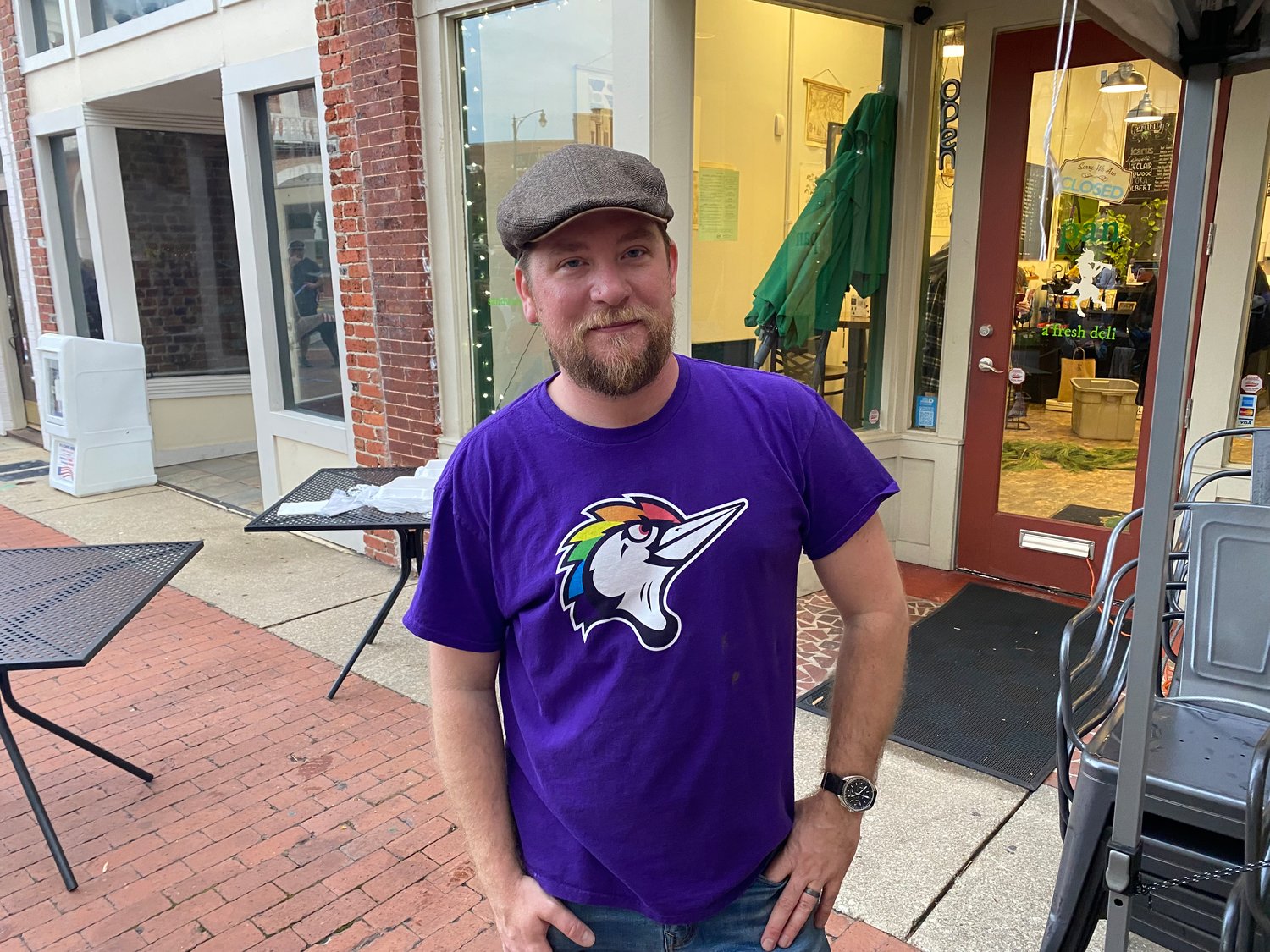 Two events were being run simultaneously: A Dickens Holiday, sponsored by the Downtown Alliance, and Holidays on Hay … A Season of Light, sponsored by The Arts Council of Fayetteville/Cumberland County. And though they were separated by a block or so, most people would probably have thought that Friday’s events were one extended effort.

Katherine Harvey, who is 32, and her 5-year-old son, Henry, said she lived in Fayetteville in 2013. She and her military family now live in Japan.

“When I visit someplace,” she said from just beyond the Market House, “I like to find events for my son. Especially since it’s Black Friday, you’ll find more gifts people work on. People create themselves.”

Nearby, The Arts Council was running a miniature train for children around the Market House. A juggler also captured the attention of youngsters.

Henry wanted nothing more than to ride on the children’s train.

After 3 p.m., hundreds of people could be seen trolling the streets, selecting food from the mobile food trucks and various items from the throng of arts and crafts dealers.

Dancers performed on a stage set up at the corner of Hay Street and Ray Avenue.

Paityn Oatis, a 21-year-old resident of Fort Bragg, said she typically visits downtown each weekend. “I’m just walking around,”  she said while checking out a vendor’s merchandise. “Everybody has cute decorations.”

Darlene Brickman, 64, said the Dickens Holiday reminded her of a similar event — The Dickens Festival held annually in the Port Jefferson Village on Long Island.

She had come out to watch the local festivities with her daughter, Stephanie Carvell, and Brickman’s two grandsons.

“Every year we went to Dickens at Port Jefferson, Long Island,” her mother said. “To me, Dickens Holiday brings joy to people. It does nothing but bring joy to people.”

The Downtown Alliance became the new sponsor of A Dickens Holiday after The Arts Council announced it would end its sponsorship. Instead, The Arts Council launched Holidays on Hay … A Season of Light.

Traditions are important to 30-year-old Monica Rojas. That’s why she brought her 8-year-old son, Fabian, downtown on Friday.

“It’s important for kids to build tradition,” she said, adding that she loved the stage performances being put on by The Arts Council.

In front of the Fayetteville History Museum, a line had formed with people waiting to get photographs of the two llamas on site.

“I think it should be more integrated. I definitely think there is room to be together,” said V. Parker, 24, who later performed as one of the ghosts for A Dickens Holiday.

The Dickens Holiday is a 22-year tradition of local shopping and holiday events. Those festivities centered around the Fayetteville Area Transportation and Local History Museum. Vendors also lined the road along Franklin Street.

Some participants roamed the streets in Victorian-styled outfits and were agreeable to taking photos with people.

Brian Graybill and his wife own and operate the downtown deli Pan.

“One of the challenges we have here is finding new guests to bring people out,” said Graybill. “It’s not a small area. This (the Black Friday events) bring new faces. At the end of the day, the more guests, the merrier.”