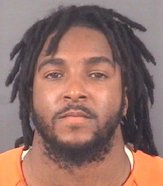 Lamarious Brown, 25, was sentenced Tuesday in District Court after police said they found heroin, cocaine and firearms in a vehicle parked outside a Bragg Boulevard nightclub in January 2018.
Fayetteville Police Department photo
A staff report

A Fayetteville man who police say was carrying heroin, cocaine and firearms in a vehicle parked outside a Bragg Boulevard nightclub has been sentenced to 71/2 years in prison, according to the Fayetteville Police Department.

On Jan. 13, 2018, Fayetteville police officers were patrolling the parking lot of the Pool Palace club at 3118 Bragg Blvd. after receiving complaints about drug activity and shootings, the release said. An officer walking past a Chevrolet Tahoe saw an AR-style rifle on the rear floorboard of the vehicle.

Officers monitoring the vehicle said that Brown left the club and unlocked the Tahoe. When officers approached Brown, he ran, but he was apprehended quickly, the release said.

A K9 unit alerted officers to the smell of narcotics in the vehicle. Officers searched the Tahoe and found a loaded AR-15 rifle with a 30-round magazine; a loaded .40 caliber firearm with 20 rounds of ammunition; 46 rounds of .223 ammunition; 5.77 grams of heroin; and 1.93 grams of cocaine, according to the news release.

Brown pleaded guilty on June 24 to charges of possession with intent to distribute heroin and cocaine and possession of a firearm for use in drug trafficking, the release said.

Brown’s 90-month prison sentence will be followed by 60 months of supervised release.

Assistant U.S. Attorney Charity Wilson of the Eastern District of North Carolina prosecuted the case. The Fayetteville Police Department and U.S. Bureau of Alcohol, Tobacco, Firearms and Explosives investigated it.