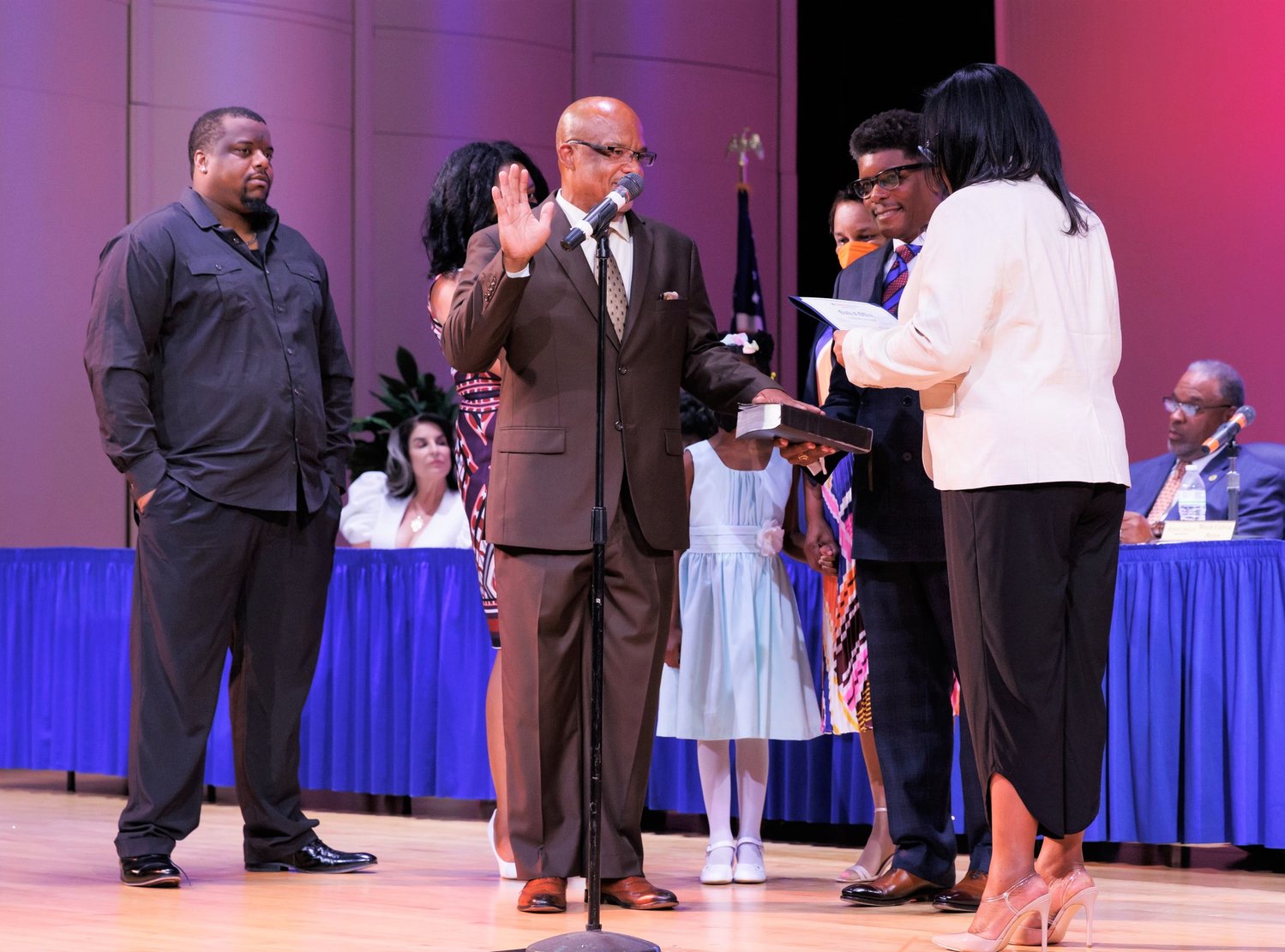 Derrick Thompson takes the oath of office to become a member of the Fayetteville City Council on Thursday night.
Photo by Tony Wooten 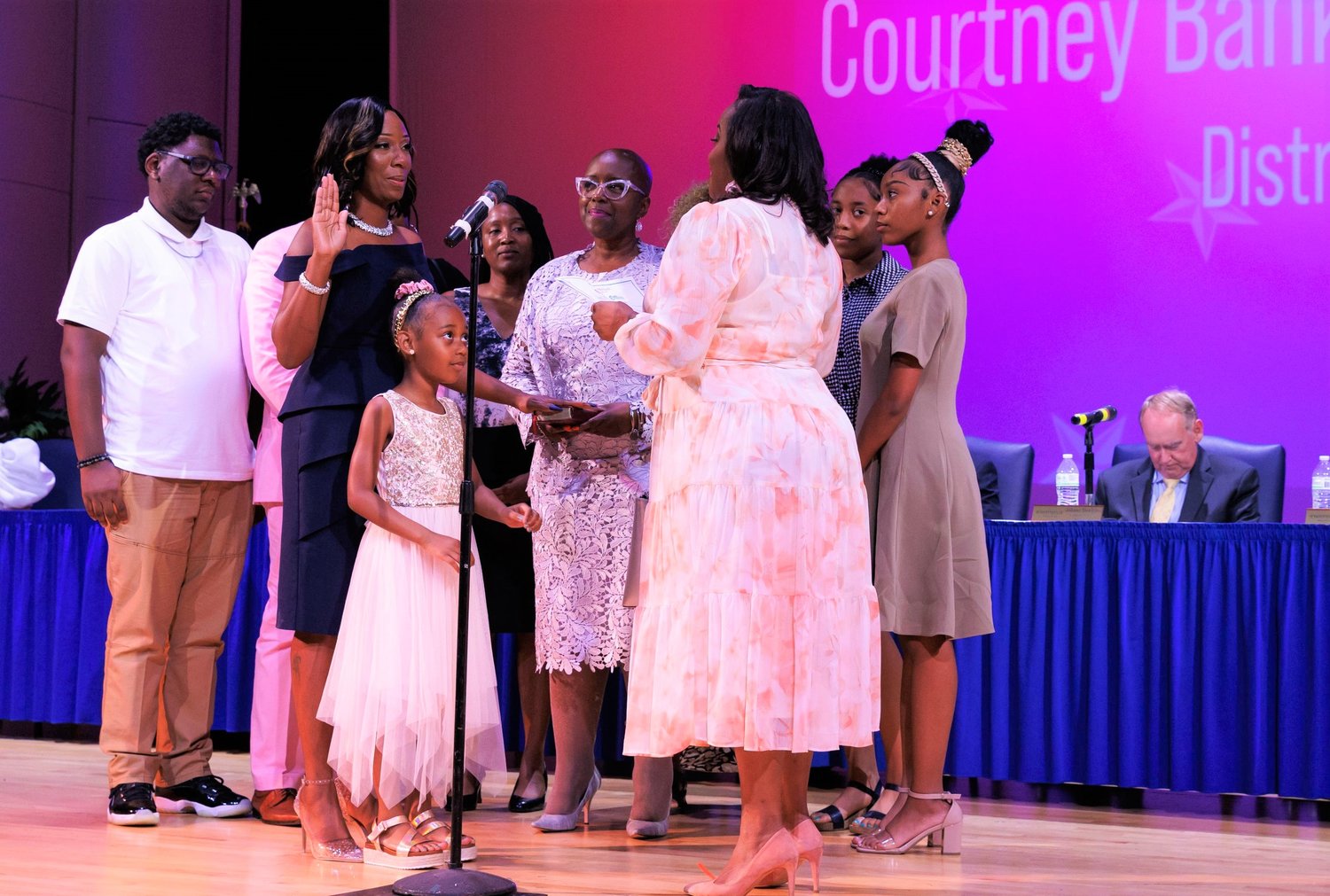 Courtney Banks-McLaughlin takes the oath of office as a member of the Fayetteville City Council.
Photo by Tony Wooten 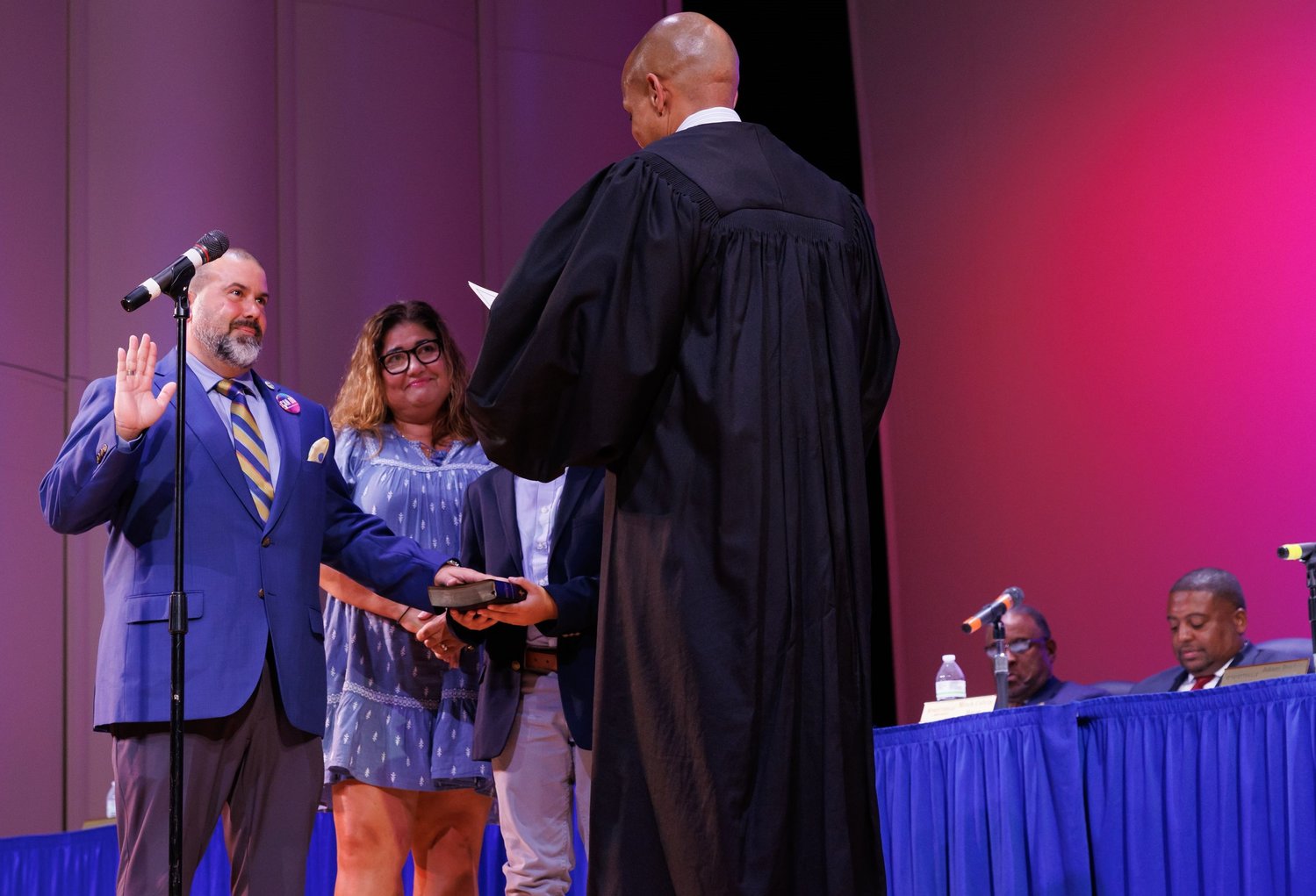 Deno Hondros takes the oath of office as a member of the Fayetteville City Council.
Photo by Tony Wooten

Brenda McNair takes the oath of office as a member of the Fayetteville City Council.
Photo by Tony Wooten
Previous Next
Posted Friday, August 12, 2022 12:03 am
By Michael Futch | Staff writer

Four new members of the Fayetteville City Council were among those sworn in to office Thursday night.

The ceremony was held at Seabrook Auditorium on the campus of Fayetteville State University.

Emcee and broadcast newsman Gilbert Baez drew some laughs from the audience when he quipped early on, “This is not a City Council meeting. We won’t be here until 11 o’clock.”

The newly sworn-in council members cast their first votes when deciding on a new mayor pro tem. Councilman Dawkins will succeed Jensen in that post after a 6-4 vote.

Voting in favor of Dawkins were Colvin, Dawkins, Haire, Hondros, Jensen and Thompson. Voting in opposition were Banks-McLaughlin, Benavente, Ingram and McNair.

Banks-McLaughlin, who pitched herself for the job during her swearing-in speech, said she wanted to nominate herself. That could have led to Banks-McLaughlin and Dawkins sharing the position. But Haire, the longest-serving current council member, said that would go against protocol and was something that had never happened in his 21 years on the council.

Banks-McLaughlin's request was dismissed, and Dawkins was selected as mayor pro tem.

Colvin expressed appreciation for being reelected as mayor.

“First and foremost, let me say, thank God for allowing this opportunity to me to serve the people of the city again,” Colvin said. “Regardless of the outcome, regardless of the candidate who was chosen, elections are very important to the operation of our government and the nation. … Thanks to the voters of our great city.

“And tonight, I stand for you humble and excited because together, we’ve made history. Because of you, I am now officially the longest-serving African American man in the city of Fayetteville.”

The audience erupted with applause.

“Because of you, voters, we have seen a tremendous expansion in diversity in this city,” Colvin said.

Like others who followed him to be sworn in, Colvin spoke of the late Bill Crisp, who he called “a mentor and father figure.” Crisp, who died at age 81 in July 2021, represented District 6 on the City Council.

Colvin also spoke at length on the issue of public health.

“We have a mental health problem here in our community,” he said. “We can no longer look away."

Colvin said he hopes that mental health will become an area of focus for not only the City Council but also all locally elected officials.

“Our first order of business, I’ll be asking council to institute a mental health full-response team in our Police Department,” he said. “We all have an obligation to do it.”

He wrapped up his speech by saying, “I believe wholeheartedly in the future of this city.”

After her inauguration, Jensen said the council has gone through a tough period since she joined five terms ago. The council has governed through two hurricanes, the COVID-19 pandemic and a rough spell of social unrest.

Jensen cited some of the accomplishments of the council in recent years, noting that the city will be working more closely with Fort Bragg on initiatives, including a collaboration on a sports complex.

She cited public safety, economic development and quality of life as ongoing concerns.

Ingram, who is in her second term, told the crowd that she is “a true born-and-raised District 2 young woman.”

“I lead with heart,” she said.

Newcomer Benavente received perhaps the biggest applause of the night when he noted that he is a graduate of E.E. Smith High School. His father, Miguel Benavente, held a family Bible for his son to take the oath of office.

Haire said he is starting his 11th term on the council.

Dawkins referenced the men of his family, saying his grandfather started “all this” in 1948 when he won a seat in the N.C. House. He also cited the influence of his father, the late J.L. Dawkins, who was the longest-serving mayor in Fayetteville’s history.

“Although I think this mayor here might break that record if he wanted to,” Dawkins said, referring to Colvin. “Goodness gracias’ I said, I don’t want that job.”

Colvin laughed from his seat onstage.

Dawkins got more laughs when he recalled his father saying, “You’ve been born with two ears and a mouth. Use them proportionately.”

Thompson, who referred to himself as a “newby on the City Council,” became emotional and paused briefly when referring to his father during his acceptance speech.

Earlier Thursday, in a recount by the Cumberland County Board of Elections in the District 3 race, Benavente’s six-vote victory over Antonio Jones was confirmed with a tally of 1,016 votes to 1,010.