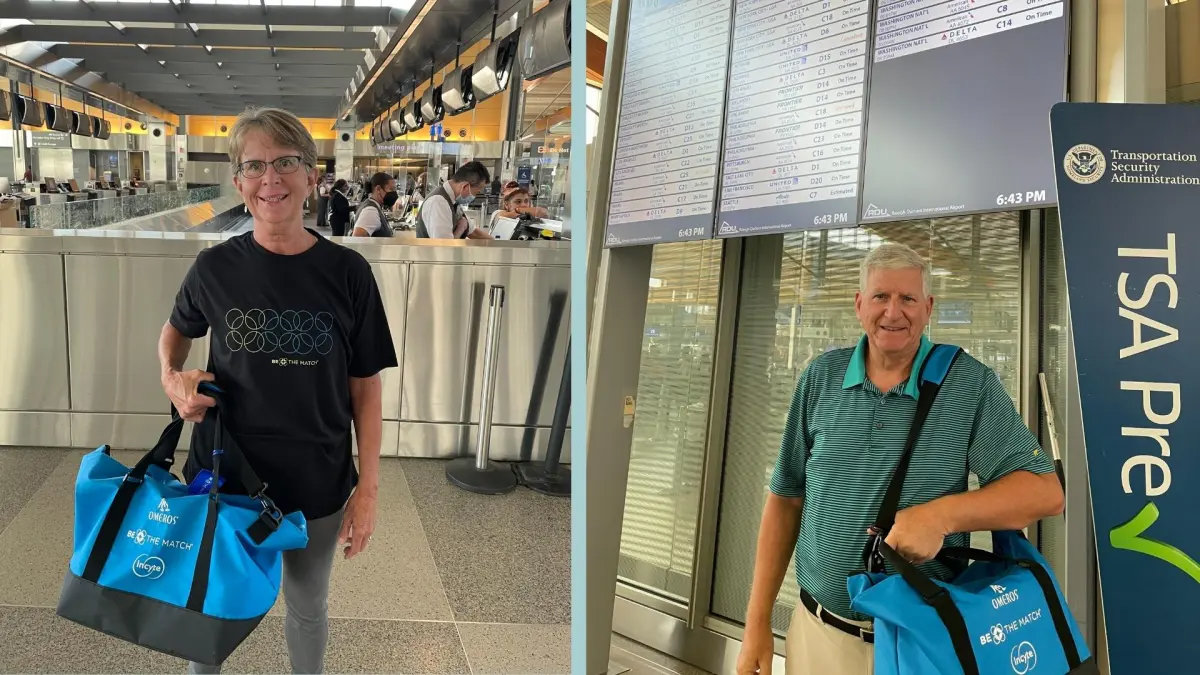 Retired couple Karon and Leo Mertens, who live in Fuquay-Varina, are traveling more than they ever have.

Since the beginning of 2020, they’ve gone on 48 trips, flying thousands of miles all over the United States. To Washington, Ohio, Texas and many more destinations.

But they are not taking personal vacations to historic landmarks or relaxing spots. They’re not even traveling together. Instead, they are couriers, ferrying precious and time-sensitive cargo in their carry-ons.

Karon’s 20 trips and Leo’s 28 trips have been to transplant centers and hospitals across the United States. The two take turns regularly flying out of Raleigh-Durham International Airport with a blue cooler in hand.

The Mertens serve as volunteer couriers for Be The Match, a nonprofit organization based in Minneapolis that connects patients with matching donors for life-saving blood stem cell transplants. A blood stem cell transplant can cure or treat more than 75 different diseases, including blood cancers such as leukemia and lymphoma and other blood disorders such as sickle cell.

Seventy percent of patients with these diseases do not have a fully matched donor in their family. These individuals depend on Be The Match to find an unrelated donor — one who might be states or countries away.

In 2021, Be The Match facilitated 6,287 transplants with logistics made possible by couriers such as Karon and Leo. Volunteers pick up blood stem cells or bone marrow provided by a donor, then hand-carry it onto flights to other cities where their freight will be transfused into a recipient.

“You can actually see what you're carrying,” Karon said. “It's not like it comes prepackaged in a closed envelope and you don't know what's in it. You can see that it's life’s blood and cells."

The Mertens are among 550 volunteer couriers and 170 staff couriers from across the country currently working with Be The Match.

From bikes to planes

In the summer of 2019, Karon went on a bike tour in Georgia and talked to the tour guide who shared all he was doing in retirement, including serving as a Be The Match courier.

She was intrigued by the role and so was Leo. As recent retirees, they were looking for different things to do and ways to get involved. Be The Match was recruiting people for the position at the time.

They both applied to be couriers. Two phone interviews and an in-person meeting with a local courier later, they were accepted.

“I understood the medical need for a team of good people to support the patient and the whole medical process,” said Karon, who has had breast cancer twice. “It just resonated with me that this is really kind of what I needed to do to give back.”

They completed online classes that educated them on the proper packaging and transport of the living stem cells as well as safe handling of the cells. The Mertens also traveled to Minneapolis for hands-on training.

They were officially approved as couriers in January 2020, just before the COVID pandemic hit.

Suddenly, travel became much more complicated. Many couriers stopped traveling for a period due to health concerns, but the Mertens were undeterred. They wanted to put their recently learned knowledge to use.

They’ve stayed busy traveling over the past two and a half years, far exceeding the required courier minimum of two domestic trips in a 12-month period.

Couriers can fly either domestically or internationally, as about half of Be The Match’s transplants have a donor or recipient outside the United States.

The Mertens keep it closer to home, staying within the U.S.

Leo said Be The Match sends five to 10 emails to their nationwide courier pool daily with trip options. Couriers choose which trips they want to apply for and accept based on their availability and trip distance. Be The Match tries to keep expenses low by choosing an available courier located closest.

“We get in a mini-competition where you know, ‘Let’s both apply and see who gets it,” said Karon. They never travel together since only one courier is needed per trip.

Costs for their flights, hotels and other travel expenses are covered, but couriers aren’t paid for their time.

“The only benefit to their job is the satisfaction of knowing that they're providing this critical life-saving service,” said Erica Sevilla, Be The Match’s public relations manager. “It's really incredible for people to give so freely of their time to go on long plane rides.”

From the time of pickup, couriers don’t take their eyes off the cooler of precious blood stem cells. They work as quickly as possible to deliver the blood stem cells to a patient in need.

“It’s trying to refresh your memory on everything you learned in class to make sure that you follow all the steps needed to do a trip successfully,” Leo said.

Upon delivery, couriers generally spend the night in the city and then fly back the next day. There’s often little time for exploring. Courier trips take an average of three days — but can be shorter or longer depending on the route.

While couriers never meet donors or recipients, the sense of accomplishment of having helped in the process of blood stem cell transplants keeps them motivated.

“They’re all ‘Woohoo’ moments,” Karon said. “I just get so excited. Not only the relief and rush of, yes, I did it but, yes, somebody’s going to do well because of us.”

Karon and Leo don’t plan to stop as couriers any time soon, which is good, because the demand for transplants is high.

Every year, 12,000 patients are diagnosed with life-threatening blood cancers or blood conditions for which a blood stem cell transplant from an unrelated donor is often their best hope for a cure, according to Be The Match.

In 2021, Be The Match added nearly 300,000 potential donors in the United States to its registry. Thirty-one percent of potential donors who joined the registry were ethnically diverse. However, Sevilla said more young people aged 18-40 of diverse racial and ethnic heritage are needed to help increase the odds of patients finding a match.

“We want to make sure that every patient has the best chance of getting the cure and the transplant that they need,” Sevilla said. “We will absolutely continue to recruit more diverse donors.”

Be The Match is not currently recruiting for the courier program. Check their site for updates later this year if you are interested in the position.

This article first appeared on North Carolina Health News and is republished here under a Creative Commons license.