For Zoe Kalevas and her kids, Hot Diggidy Dog is a family affair, and that’s no (fried) bologna! 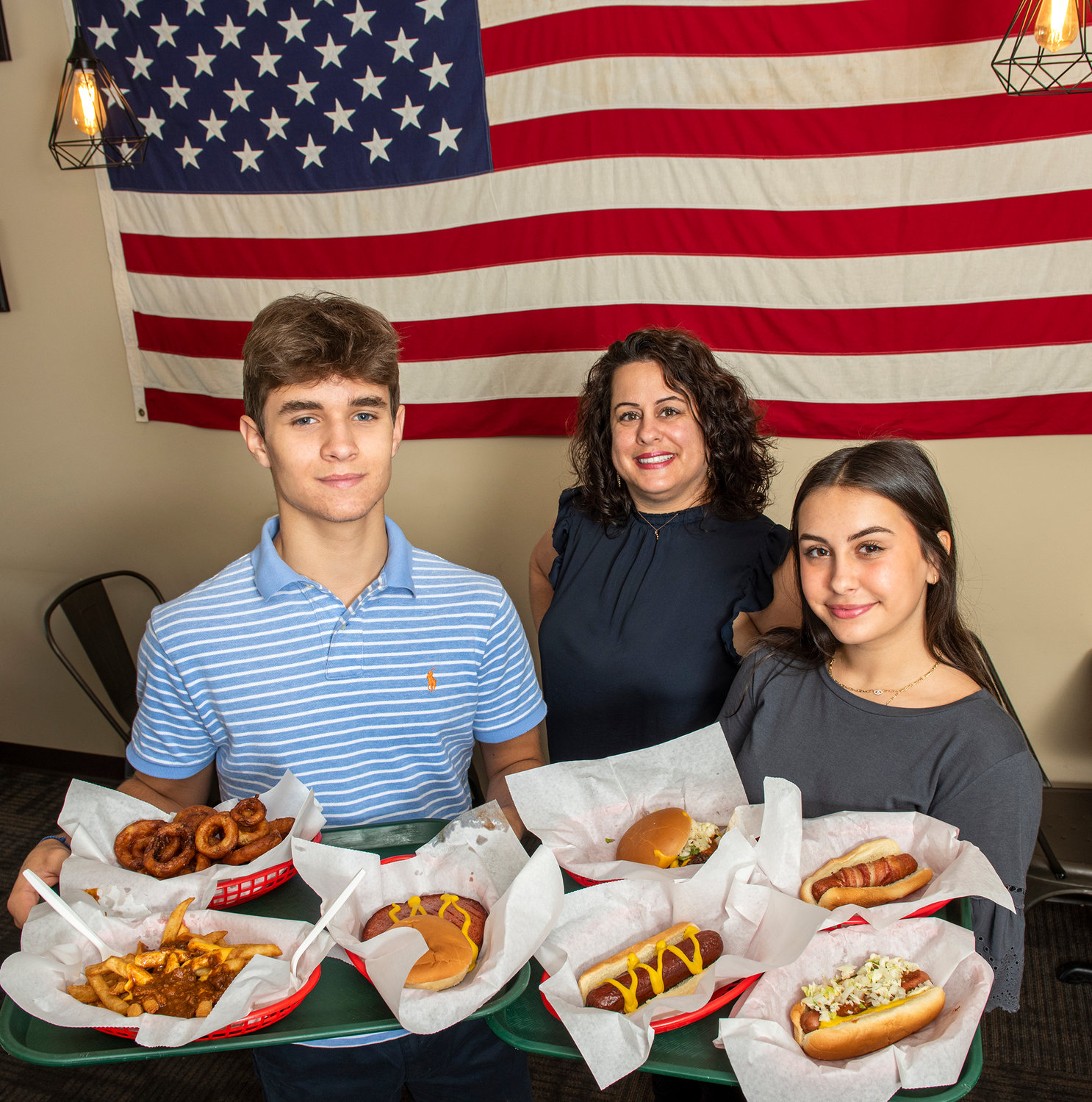 Zoe Kalevas, the owner of Hot Diggidy Dog, with her children Billy and Roula.
Cindy Burnham 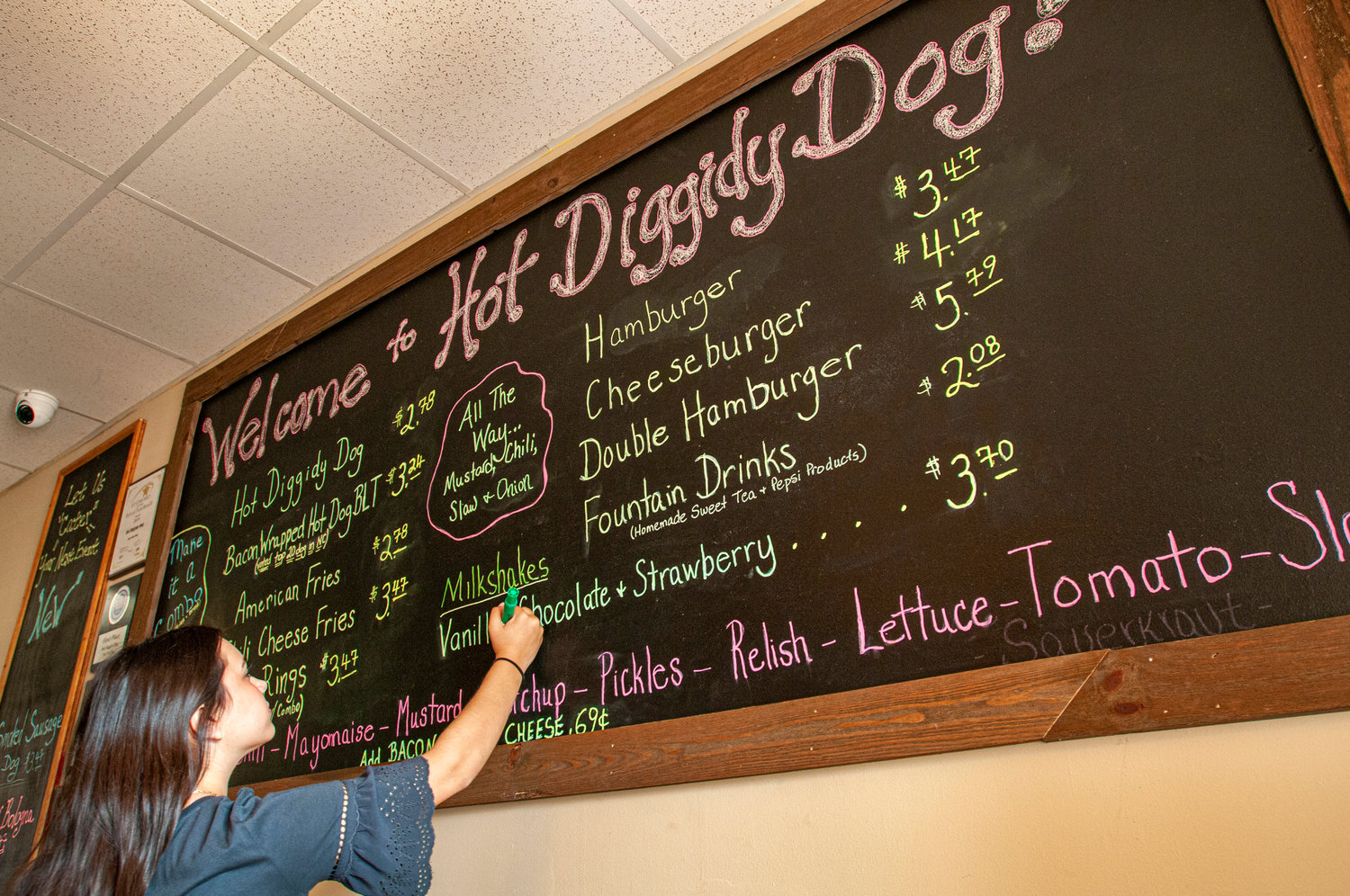 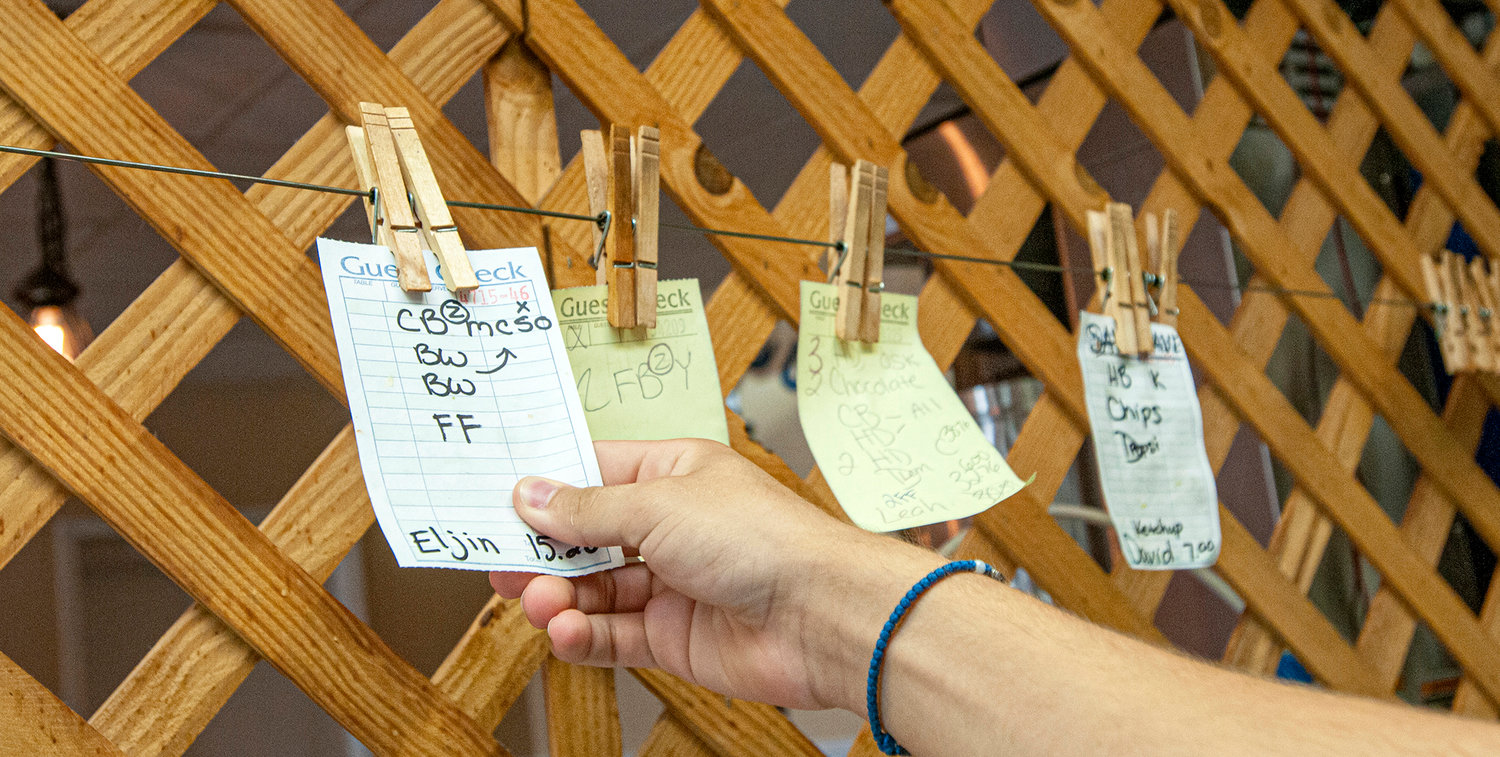 Orders are handwritten “old school” on a paper pad, ripped off, and pushed down by clothespin on an industrial wire from the front of the house to the cooks.
Cindy Burnham 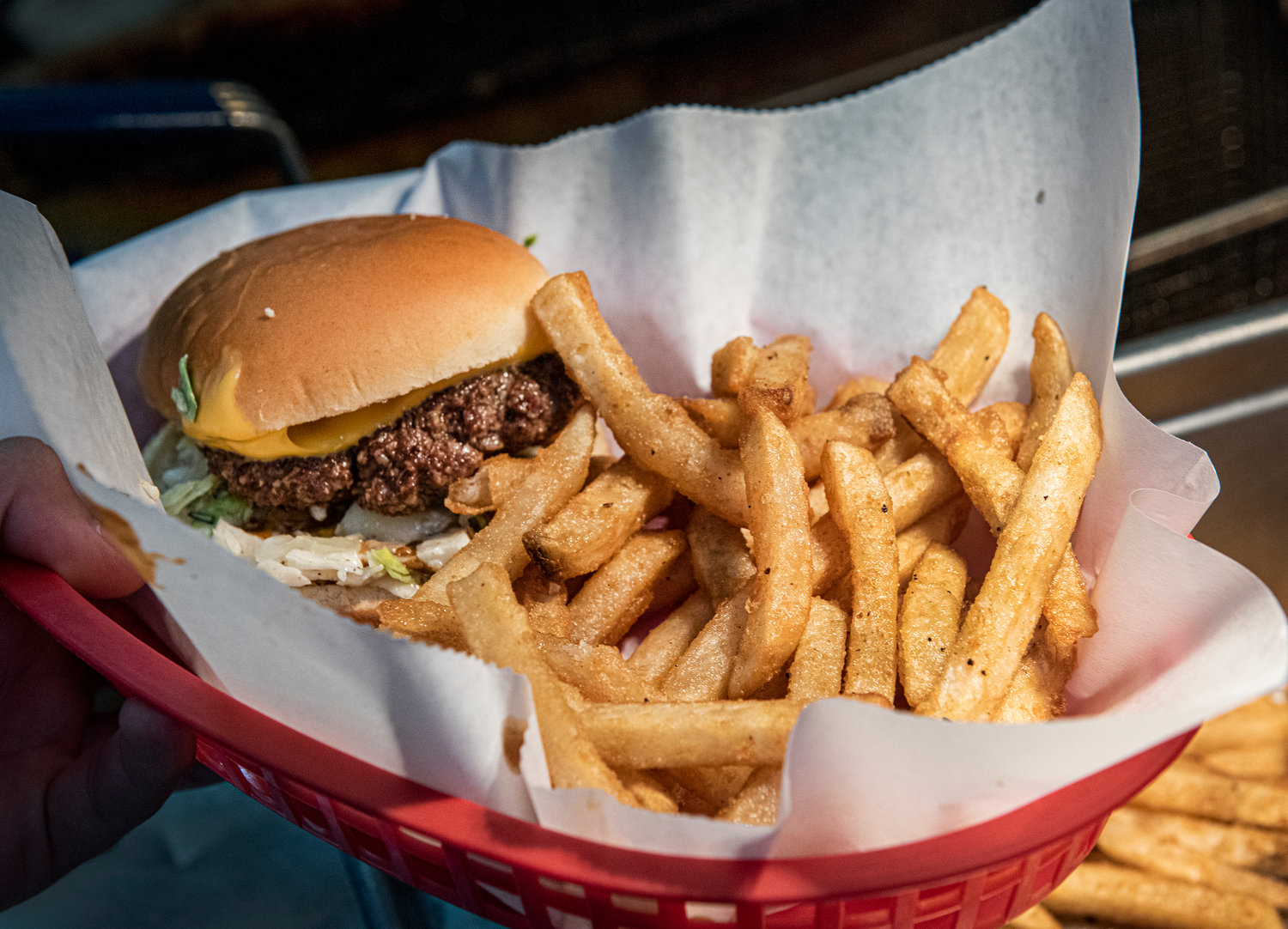 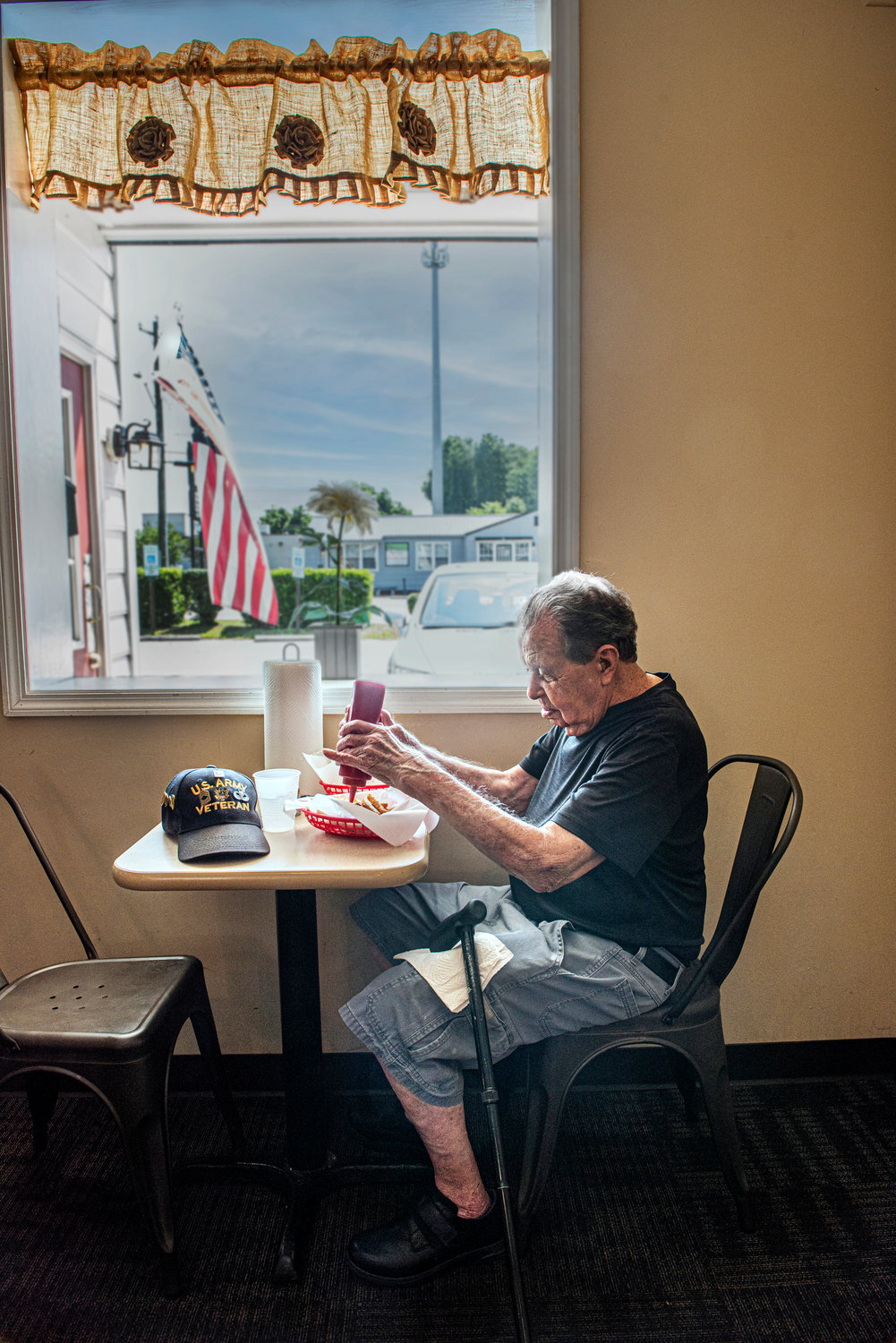 Army veteran Jimmie Ward is a regular who always orders the same thing: Two hot dogs “all the way,” a strawberry milkshake with a spoon and a cup of water.
Cindy Burnham
Previous Next
Posted Saturday, February 19, 2022 4:12 pm
By Janet Gibson

Editor's note: This story was originally published in the July 2021 issue of CityView magazine.

All is quiet in the kitchen of Hot Diggidy Dog on Roxie Avenue. This is where the magic happens about an hour before the crowds start to line up around 11 a.m. on weekdays for their favorite hot dogs, burgers, fried bologna sandwiches, chili-cheese fries, onion rings and, quite possibly, the thickest, most strawberry-licious shakes on the planet.

The owner, Zoe “Mama Bear” Kalevas, directs her teens Billy and Roula, who are focused on just a couple of the tasks in their summer jobs. Billy is shaping the beef patties and weighing them on a scale to a precise four ounces each. Roula perfectly chops cabbage for homemade slaw with a super-long knife that could scare away a ninja.

Zoe looks on and smiles. Their dad would be proud.

“We keep on going!” says Zoe, who is a spark of motherly Greek energy. “There are good days ahead.”

The truth is, sometimes Zoe fights back the tears, but she tries to remember how happy-go-lucky her husband was, how much he loved Hot Diggidy Dog and their customers and how much everyone loved him back. Last Nov. 20, Vick Kalevas was hospitalized for COVID-19. On Dec. 12, he passed away. He was 56.

Zoe kept the restaurant closed until Feb. 1. After she reopened, her regulars were back, just as kind and wonderful as ever, touching her heart. So was her small, dedicated team. Everyone is treated like family here. Because in Zoe’s mind, they are.

In a world that moves way too fast, Hot Diggidy Dog is a reminder to slow down and smell the roses. It’s a quaint place where the hot dogs can be a mix of beef and pork or all-beef. “Carolina style” means mustard, onions, chili and slaw, and it’s possible to eat for under 5 bucks. It’s a slice of Americana where the Stars and Stripes proudly waves and a chalkboard menu keeps it simple – still with remnants of Vick Kalevas’ handwriting.

The crowd is a mix of couples who have been married forever, veterans who proudly wear hats marking the wars in which they have fought, soldiers in fatigues, families with small children, and solo diners relishing every bite of their meals, right down to the last salty fry and ketchup licked from their fingers.

There was the time not too long ago when a family brought in their dad who was dying of cancer and among his last wishes was to have a picnic. Zoe Kalevas wasted no time. She picked up a table and chairs, moved it all outside under a shade tree, and she and her people got cooking to make his wish come true. (Zoe had lost her own mother, only 63, to cancer just months before Vick died, so the chance to help – and feed – others is magnified these days.)

On a typical weekday, from 11 a.m. to 3 p.m., the kitchen will crank out an average of 300 regular hot dogs and 75 of the bacon-wrapped or “BLT” ’dogs, which were named among the top 20 hot dogs in North Carolina by “Our State” magazine for two consecutive years. About 150 burgers get consumed daily. Fountain drinks are the beverage of choice, along with super-thick vanilla, chocolate and strawberry milkshakes, the latter made with real fruit.

The mostly open kitchen is a well-oiled machine with one person at the grill, another at the fryer, another at the sandwich unit, and two people up-front to take dine-in orders, work the register, the phone and to-go window (call ahead of time to order at 910-426-1300).

Orders are handwritten “old school” on a paper pad, ripped off, and pushed down by clothespin on an industrial wire from the front of the house to the cooks.

The team takes turns coming out with the orders on red plastic trays, belting out customers’ numbers and orders.

“This isn’t even like work to me!” says Zoe, with boundless enthusiasm, after delivering an order. “This is my playground!”

The fun vibe extends to the background music – hits from the 1970s and ’80s. Maybe that’s another reason why people keep coming back for more. How can you be anything but happy when you’re eating an awesome hot dog and listening to the theme song to “The Greatest American Hero”?