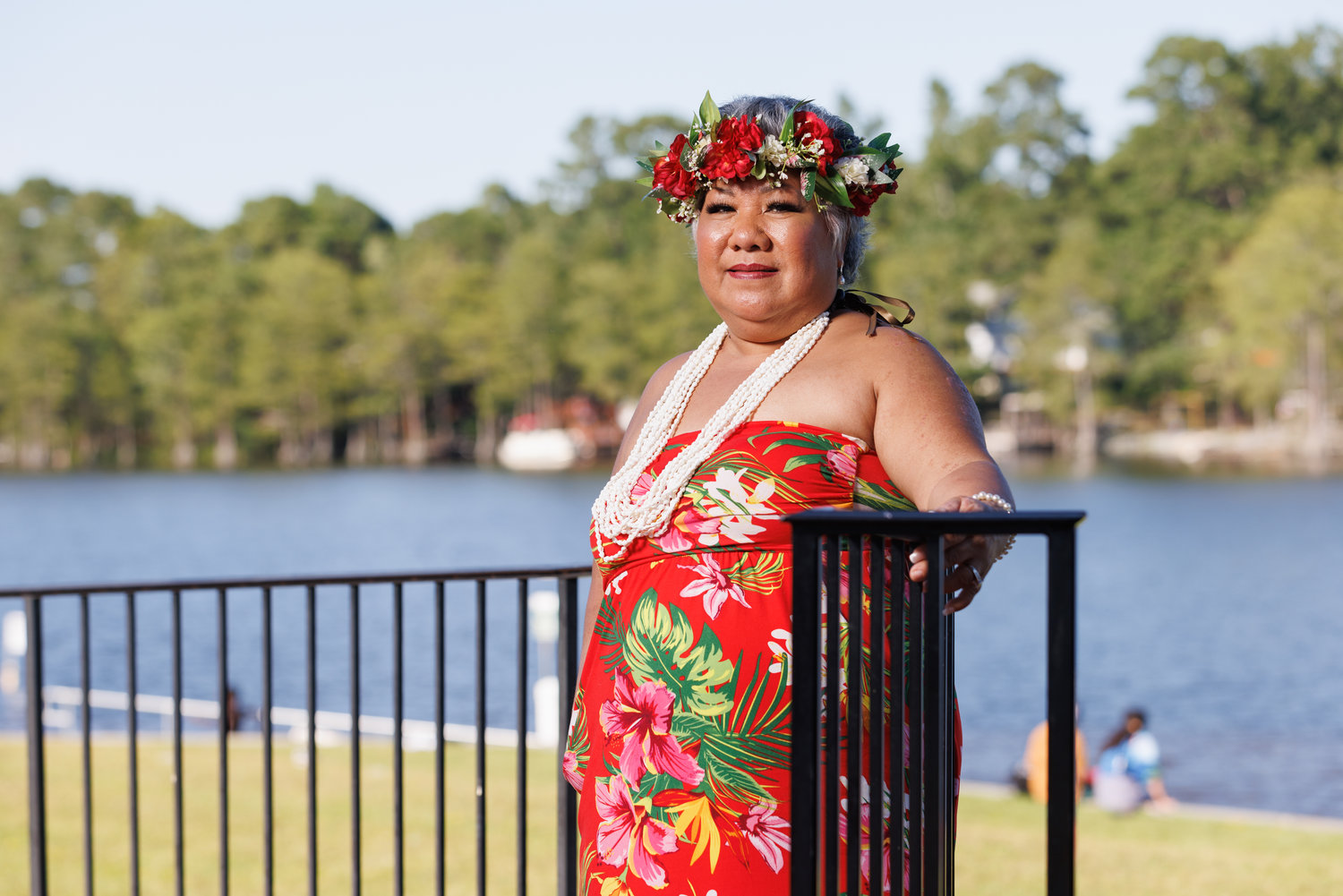 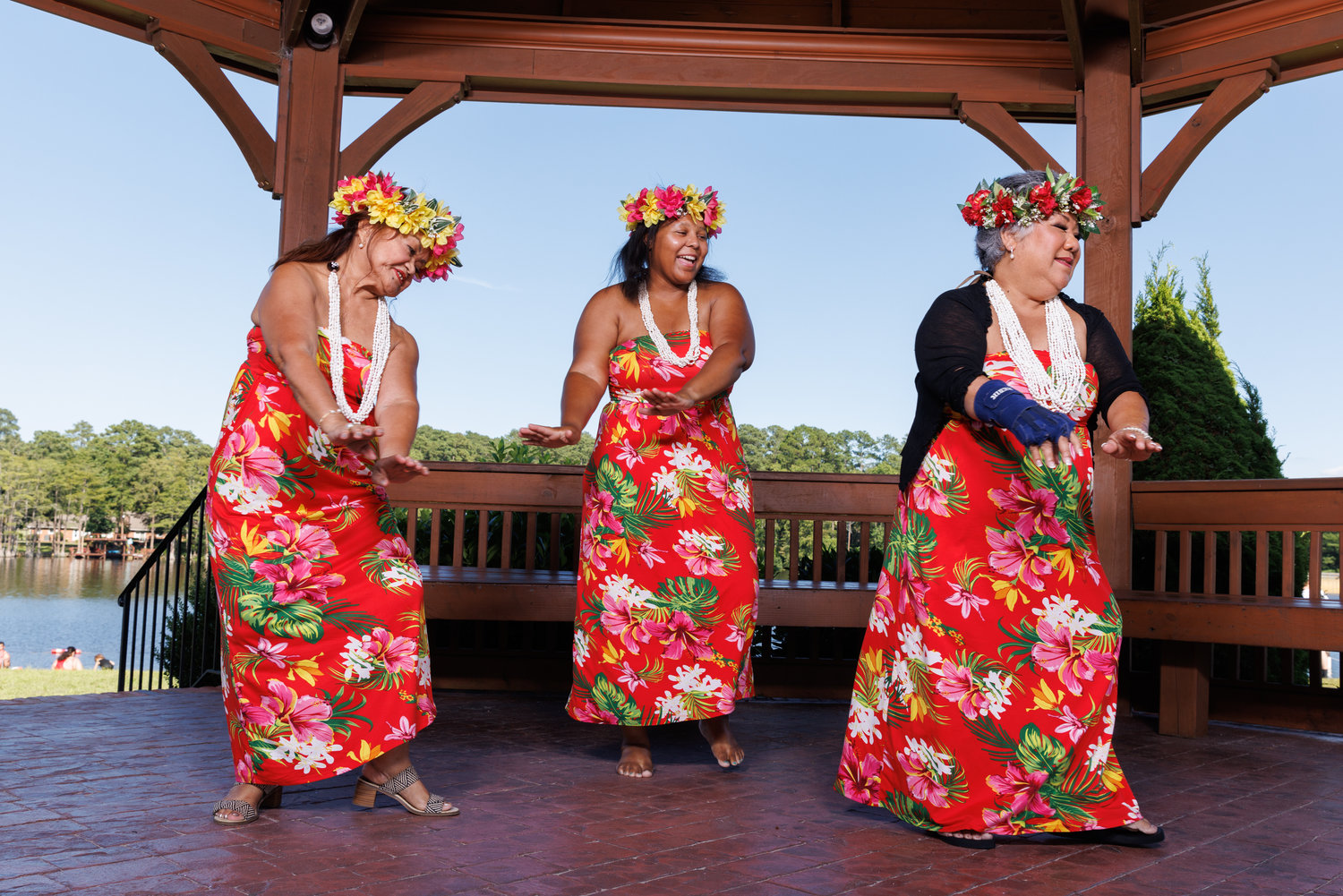 Kui Rivera, right, the founder of Aloha Ka’naka O Hula Halau, has taught hundreds of dancers over the years. Among them are, from left, Cecille Guerrero and Syreeta Jackson. The dance troupe is scheduled to perform at this month’s International Folk Festival.
Anthony Wooten
Previous Next
Posted Friday, September 2, 2022 11:37 am

The moment I hear the music, I just move. I forget the pain, the headaches. It is natural for me. It makes me feel good; it makes me feel free.”
By Janet Gibson | Photography by Tony Wooten

Kui Rivera lives for the art of hula and her beloved Aloha Ka’naka O Hula Halau — better known as “The Hula Girls.”
Since 2006, she has led the Hawaiian-Polynesian dance troupe in hundreds of performances at community gatherings, including Fourth Friday, the Dogwood Festival and the International Folk Festival.
“Hula is the language of Hawaii, the island people,” she says. “It’s sacred. It’s beauty. Hula is the language of the heart.”
Known for her sunny spirit, Rivera was thrown for a loop when she was diagnosed with Stage 2A breast cancer in September 2021 following her annual mammogram. Vivacious and petite, with a joyful giggle, she felt like the air had been taken out of her sails.
“I felt lost,” says the 63-year-old mother of three and grandmother of four.
She credits her husband, Jorge, for helping her navigate the journey — and knowing what her soul instinctively needs.
“He took me to the beach, and I put my toes in the sand and cried.”
Over the course of several weeks of chemotherapy at Womack Army Medical Center, Rivera’s emotions were a roller coaster, and her memory, a bit fuzzy, she admits. But she kept dancing. As much as her energy levels would allow, she also continued weekly practices with her “girls” (plus one man in the group) at Hope Mills Lake park.
“The moment I hear the music, I just move. I forget the pain, the headaches. It is natural for me. It makes me feel good; it makes me feel free,” says Rivera, whose full name is Fiante Kuinanialoha Rivera.
She has been dancing almost her entire life, along with making traditional costumes and accessories. She started studying hula at age 5 in Honolulu.
In 2004, while her husband was stationed with the Army in Colorado Springs, Rivera was homesick. That prompted her to start the dance troupe and later bring the concept to Fayetteville after Jorge, who is now retired, was transferred to Fort Bragg. There have been dozens of dancers over the years, ranging in age from about 4 to 74.
On July 11, the dancing stopped temporarily after Rivera underwent a unilateral mastectomy and the removal of three lymph nodes. Then she received some disappointing news: The surgery didn’t get all the cancer cells. Beginning this month, Rivera is scheduled to undergo five to six weeks of radiation treatment.
After she underwent a mastectomy, Rivera had a drainage tube and was not “allowed” to dance. She worked the music and talked — a skill she admittedly has mastered — while the rest of the troupe practiced and performed locally.
Once the drainage tube was removed in early August, Kui and Jorge headed for Virginia Beach, Virginia, for Polyfest, a festival that showcases some of the best Hawaiian and Polynesian dancers in the country.
“It was beautiful, and I had a great time,” says Rivera, who stepped out of her comfort zone to perform solo there.
“She is very resilient, very determined as a hula teacher that her students will come up to her standards,” says “Auntie” Cecille Guerrero, 74, the senior “Hula Girl.”
Guerrero’s husband, Sonny, is the only male dancer in the group.
Rivera doesn’t hesitate when asked about the hula dancers participating in the 44th International Folk Festival on Sept. 23-25 in downtown Fayetteville. The celebration will be back after a two-year hiatus because of the COVID pandemic.
She says the Hula Girls will be dancing and waving from a float at Saturday’s Parade of Nations down Hay Street, beginning at 9 a.m. They plan to perform on Saturday and Sunday during the festival.
Rivera is happy that she’s been transparent about the cancer journey on her Facebook page, in large part to ask for prayers. She included posts about the heartache over losing her long, flowing black hair. But then she decided, “I will adapt.”
She has chosen to mostly not wear wigs and let the silvery gray pop out naturally in her short ’do. She kind of likes it now.
Just as the art of hula is about storytelling — “how we move our hands and hips, our facial expressions,” she says — her personal story is unfolding in real time.
Even when she feels like life is all too surreal, it always comes down to the dance.