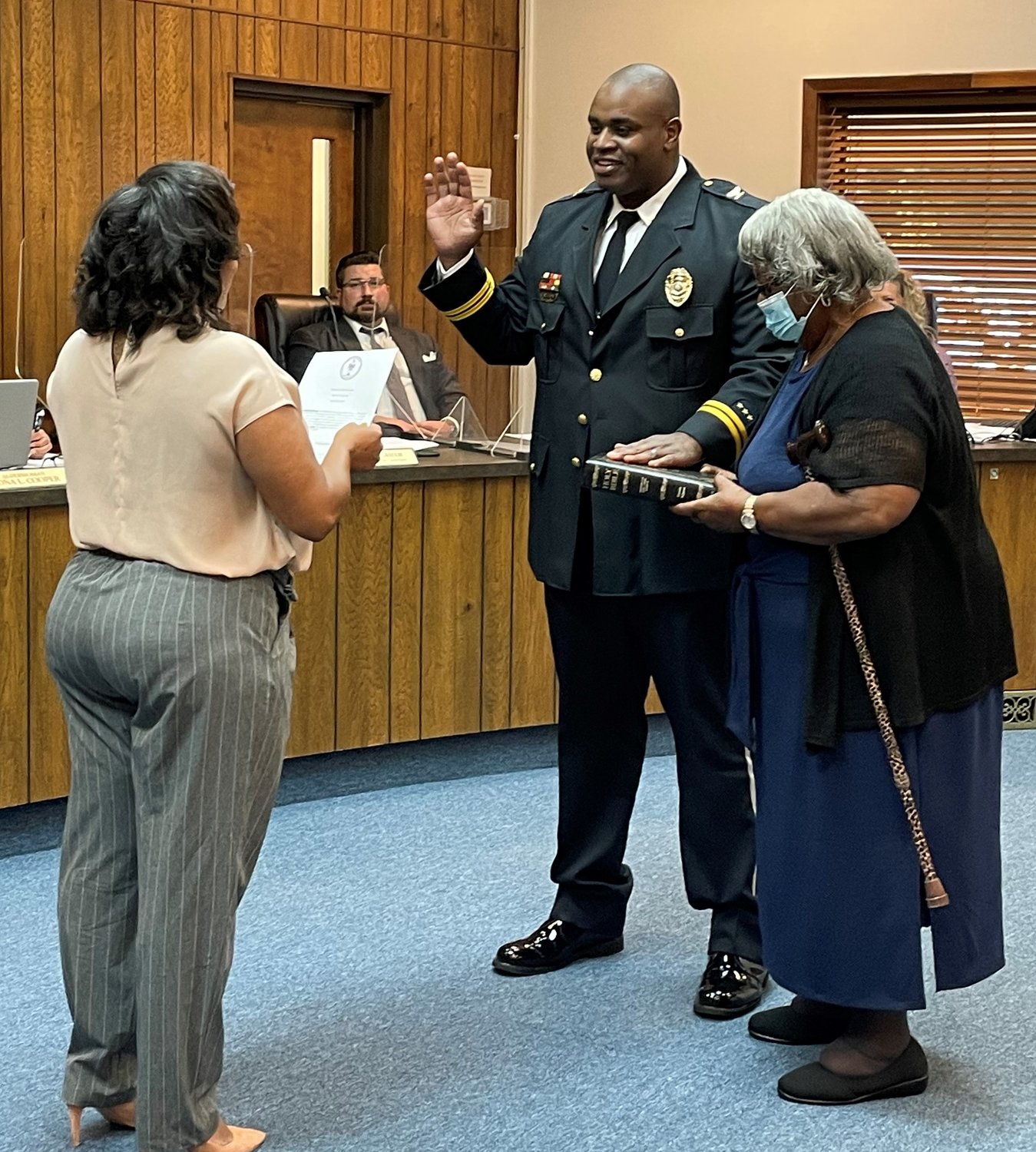 Spring Lake Mayor Kia Anthony administers the oath of office to Dysoaneik Spellman, who was sworn in as the new police chief on Monday night.
Photo by Jami McLaughlin 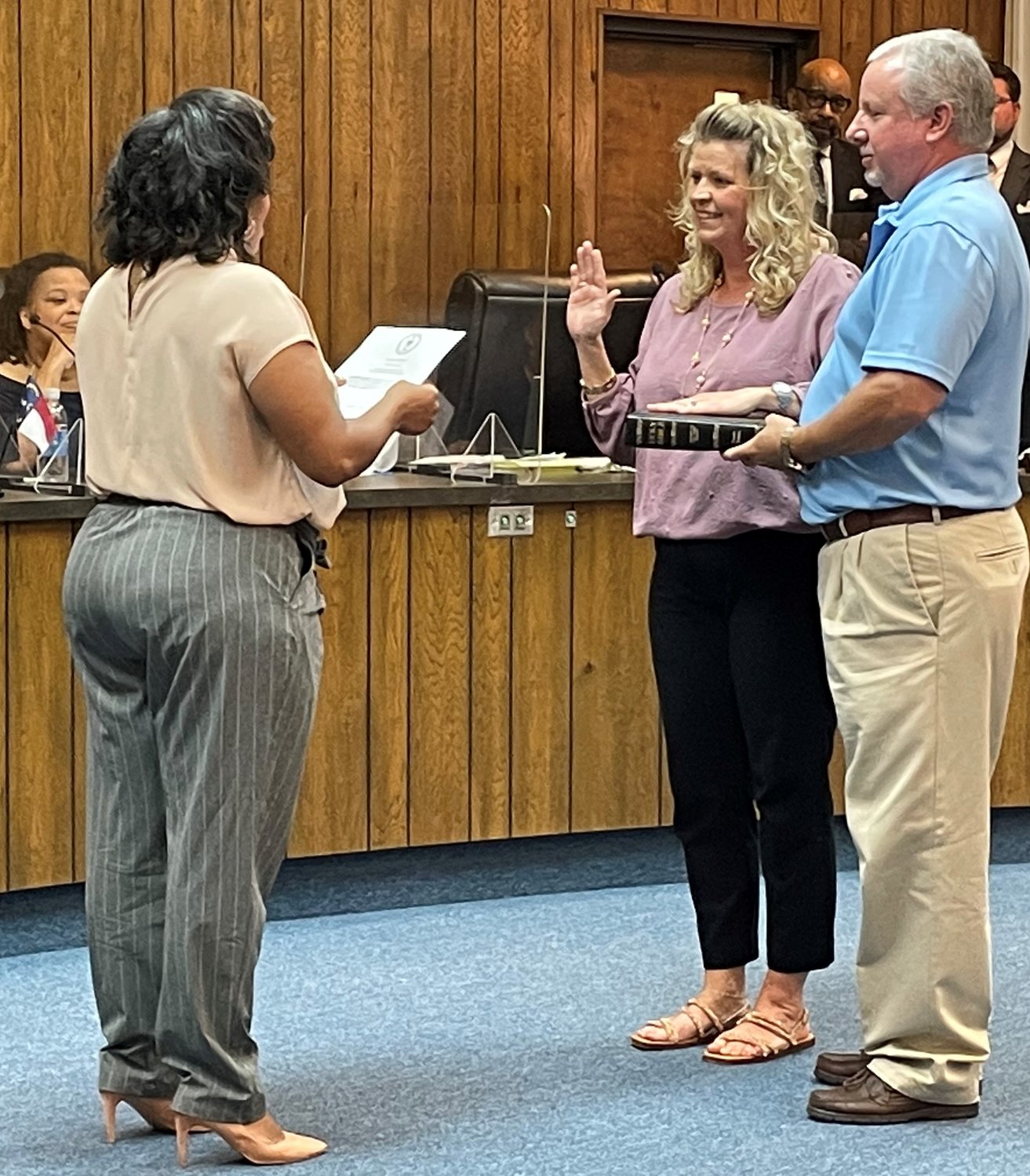 Spring Lake Mayor Kia Anthony administers the oath of office to Patricia Hickman, who was sworn in as the interim town clerk on Monday night.
Photo by Jami McLaughlin 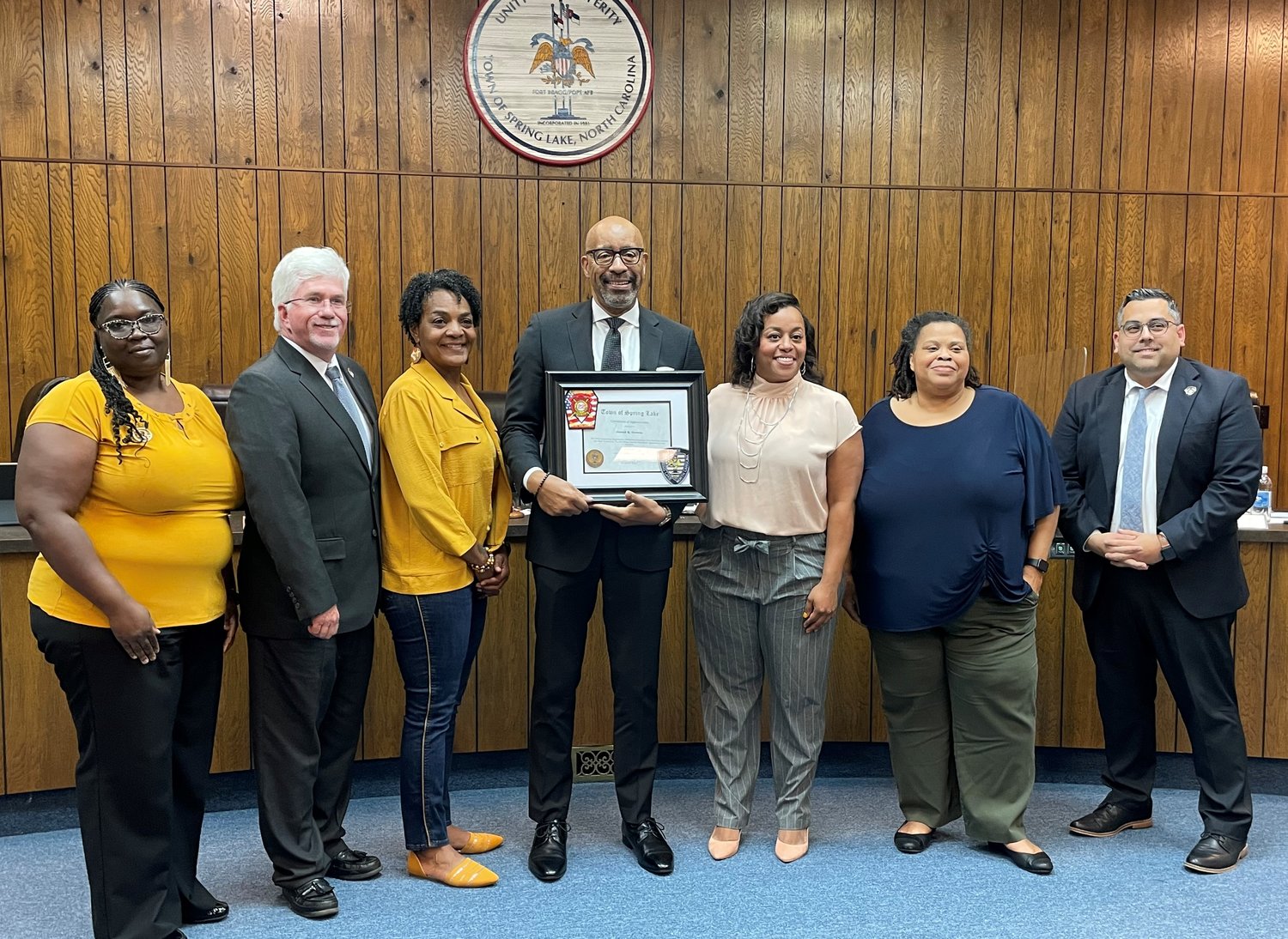 The Spring Lake Board of Aldermen presented Joe Durham with a plaque Monday night to thank him for his time as the interim town manager.
Photo by Jami McLaughlin
Previous Next
Posted Monday, September 26, 2022 11:44 pm
By Jami McLaughlin

SPRING LAKE — Dozens of missing town vehicles cited in an audit report released earlier this year were the result of careless and unsystematic recordkeeping, interim Town Manager Joe Durham told the Board of Aldermen on Monday night.

“This is something that has happened for a long time,’’ Durham said. “We found titles in drawers and bags. The recordkeeping that was in place in the past is far from best practices.”

The audit released in March by the Office of the State Auditor found that Spring Lake officials did not safeguard town vehicles, leading to the potential for theft or misuse. It was one of several findings cited in the audit.

In response to the audit, the Board of Aldermen formed an Audit Committee to look into the issues raised in the state audit. Durham was tasked with looking into the discrepancy related to the town vehicles.

Durham told the board that the North Carolina Division of Motor Vehicles had 165 vehicles on record for the town of Spring Lake, but the town only owned 68 vehicles. That number was determined by a visual inspection and a cross-check of insurance records with the North Carolina League of Municipalities, he said.

“There is a significant difference in the vehicles we own and what DMV shows that we have titles to (for vehicles),’’ Durham said. “It’s a difference of 97 cars.”

He showed the board and audience a PowerPoint presentation of some older vehicles that were found to still be active in the DMV system, including a 1959 Ford F150 and other late model vehicles. He said most of the vehicles that were not in active service with the town were either wrecked, sold at auction or undrivable.

“We don’t own these vehicles anymore,’’ Durham said. ”They’ve been disposed of; they are not drivable. No one is driving these wrecked vehicles.”

“These are not missing vehicles; we believe this is a result of careless recordkeeping versus something nefarious.”

He said his work to reconcile the inventory would be completed this week.

“That was a big task,’’ she said. “It was a very tedious task. One that I’ve been getting hammered over repeatedly. I’m super excited to know that this is one major bullet point on the audit report that we can check off.”

Durham said the town’s next step would be to transfer the titles of the vehicles that were taken out of service, which did not occur previously. He said the remaining vehicles would be removed from DMV ownership records by way of a state form.

One of the findings in the audit report was that the town had a policy that vehicles were not for personal use. However, the policy lacked guidelines for monitoring and documenting vehicle use. The report cited the misuse of town vehicles by employees, including by former Economic Development Director Tonny McNeil, who lacked documentation for fuel purchases and business use for numerous trips over an almost two-year period to Dillon, South Carolina, where McNeil was from.

Palacios also reported that the board was working on American Rescue Plan Act funds in closed sessions.

“There have been discussions on ARPA funds,’’ Palacios said. “Those discussions, while behind the scenes, are in their infant stage, part of a long-term process.”

Anthony said the money has not been spent yet.

Durham also gave an update on the town’s transition to the Fayetteville-Cumberland Parks & Recreation department, which is in its final stages.

“We have been working on this for several months with Cumberland County and the city of Fayetteville in trying to determine requirements, conditions, etc.,’’ Durham said. “We found we don’t need an interlocal agreement. We don’t need an operation agreement.”

He said that even though the transition was supposed to be completed by July 1, it would be made effective in October and a budget amendment would be presented to the board in November to reflect that change.

Durham also told the board that the Spring Lake Parks and Recreation Advisory Board and the Spring Lake Senior Advisory Committee would be dissolved. Residents are encouraged to apply for spots on the Fayetteville-Cumberland Parks & Recreation advisory board as seats become available. There are currently no vacancies, according to Durham.

“We are working out operational details now. There is no formal agreement other than to adopt Spring Lake into the recreation district,” Durham said.

The board did not receive a financial report because David Erwin, the town finance officer and accounting and financial management advisor for the Department of the State Treasurer, was not at the meeting.

In other business, more than 20 friends and family members watched as Dysoaneik Spellman was sworn in as the new police chief. Patricia Hickman was also sworn in as the interim town clerk.

Palacios also updated residents on the town manager search. He said the board interviewed potential candidates last week and hopes to make an announcement in October.

Durham was presented with a plaque thanking him for his time as the interim town manager. He plans to work at home until a new manager is in place starting next week.

The board went into closed session citing the general statute for personnel at 6:45 p.m. The aldermen came out of closed session shortly after 8 p.m. with no action taken.