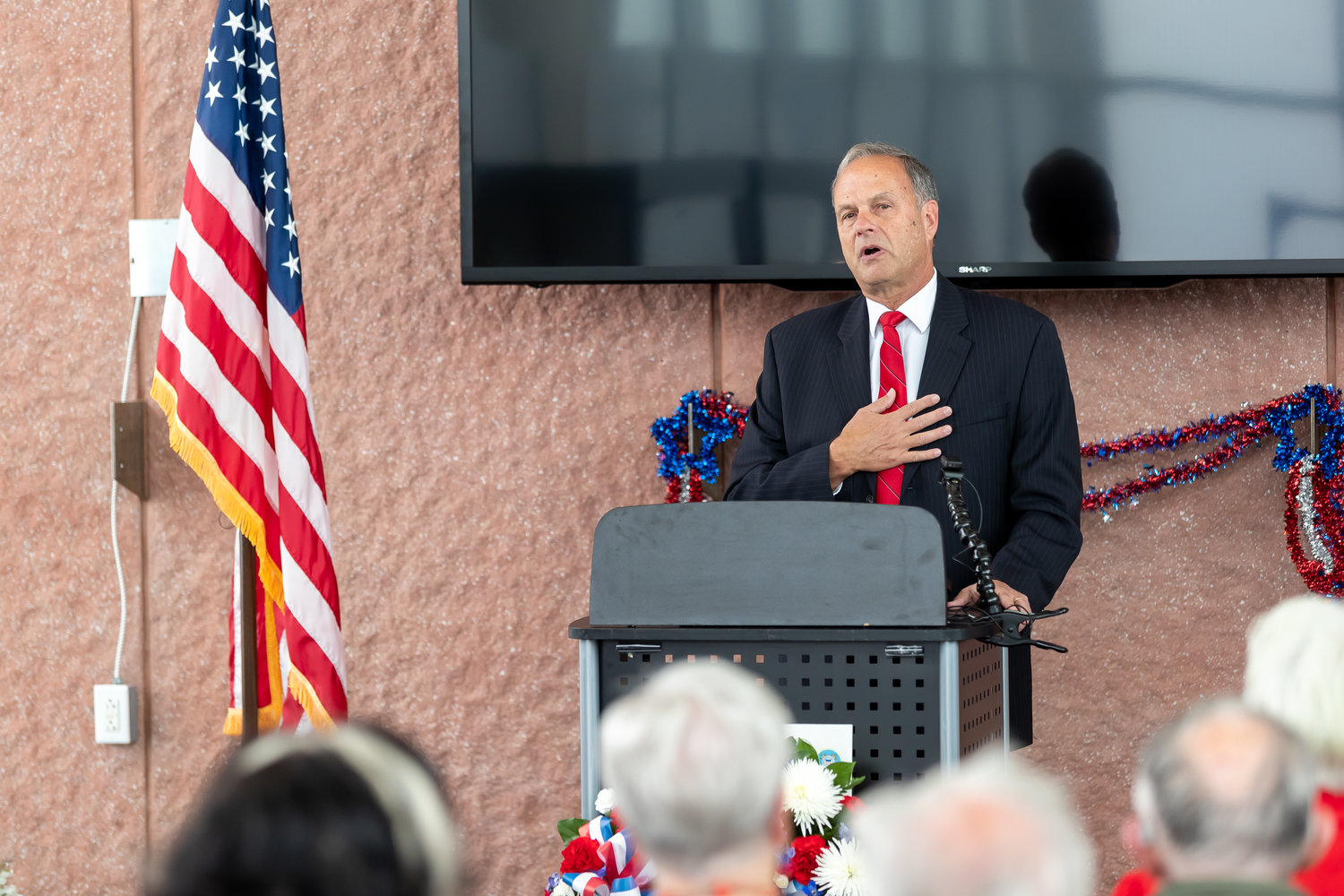 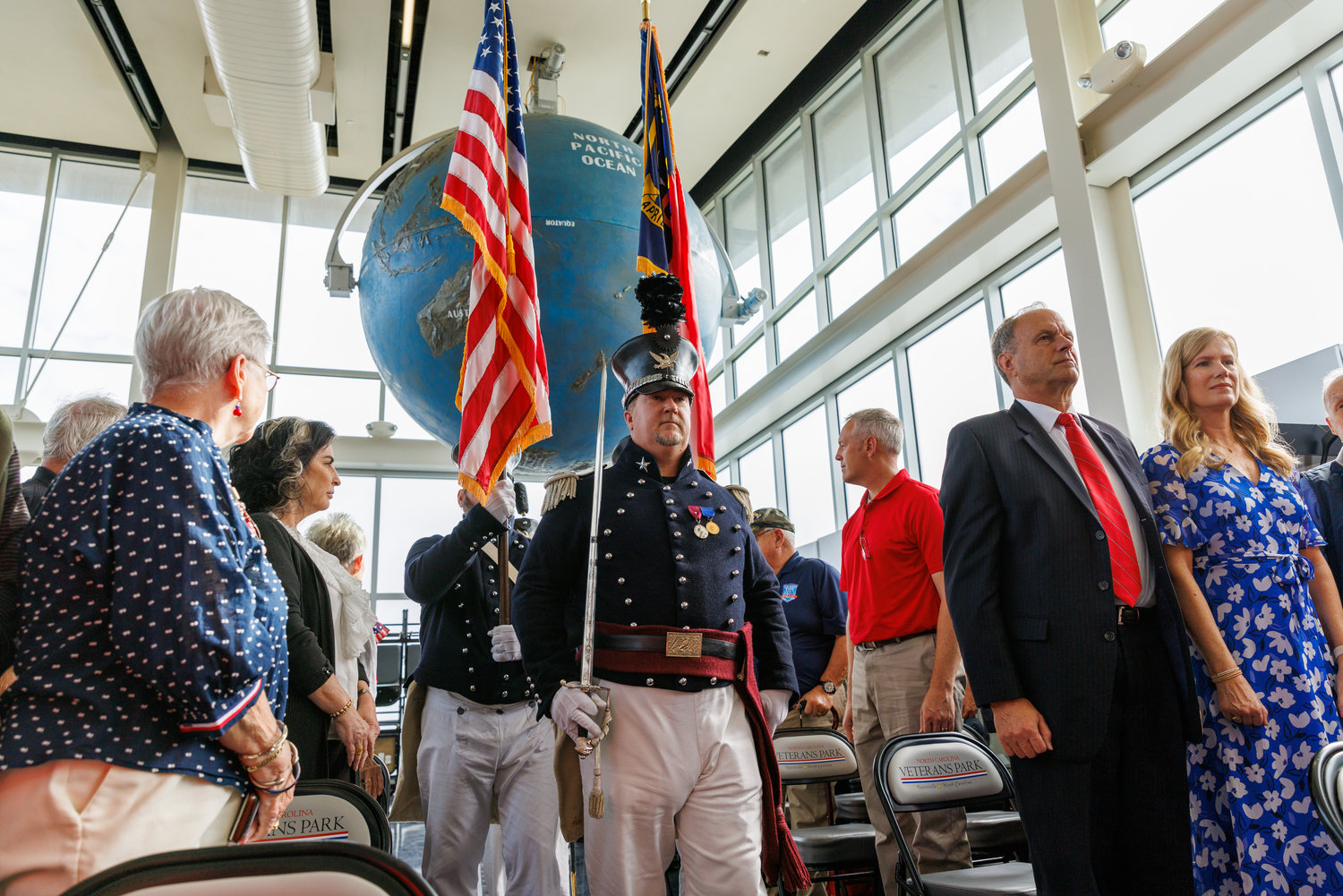 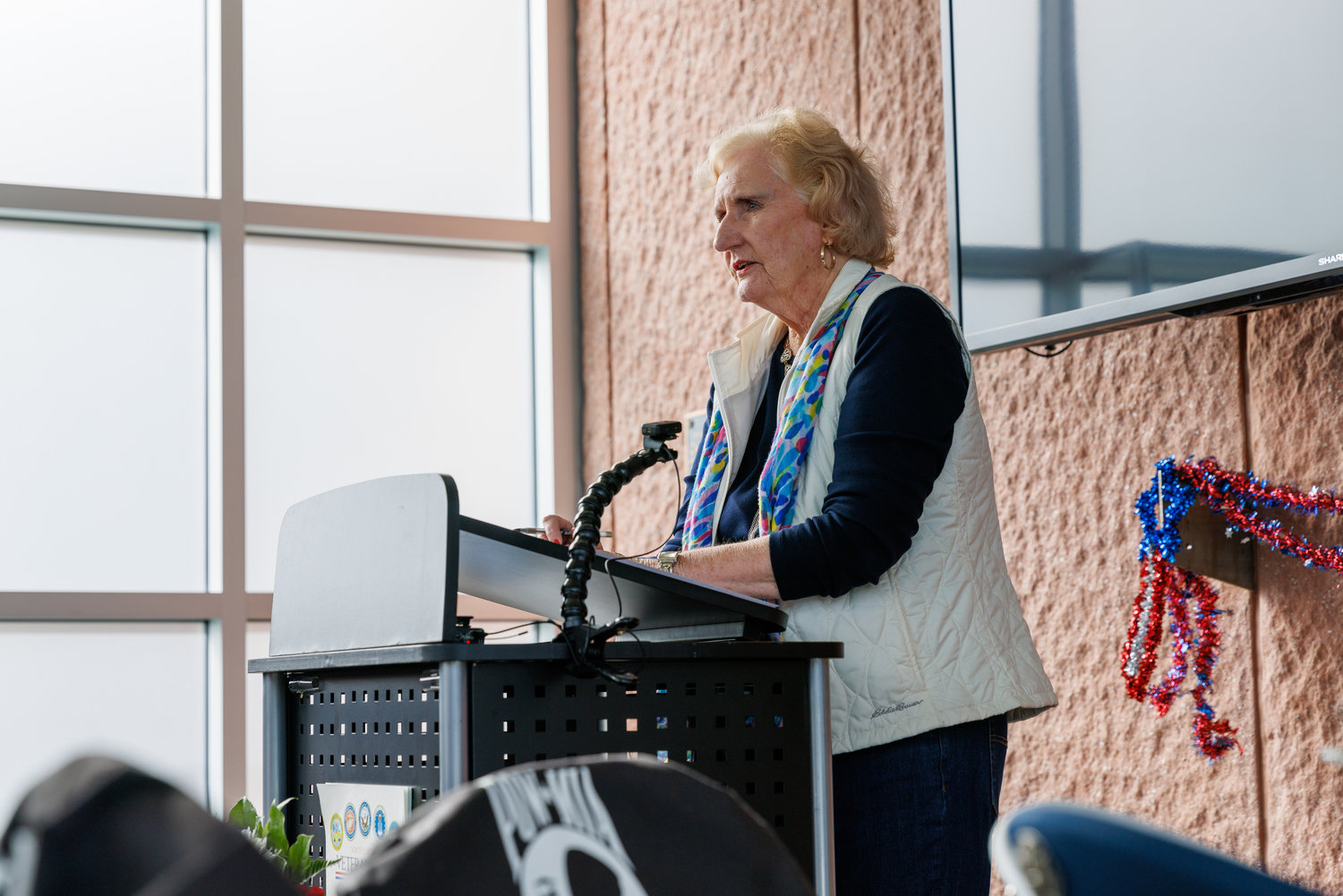 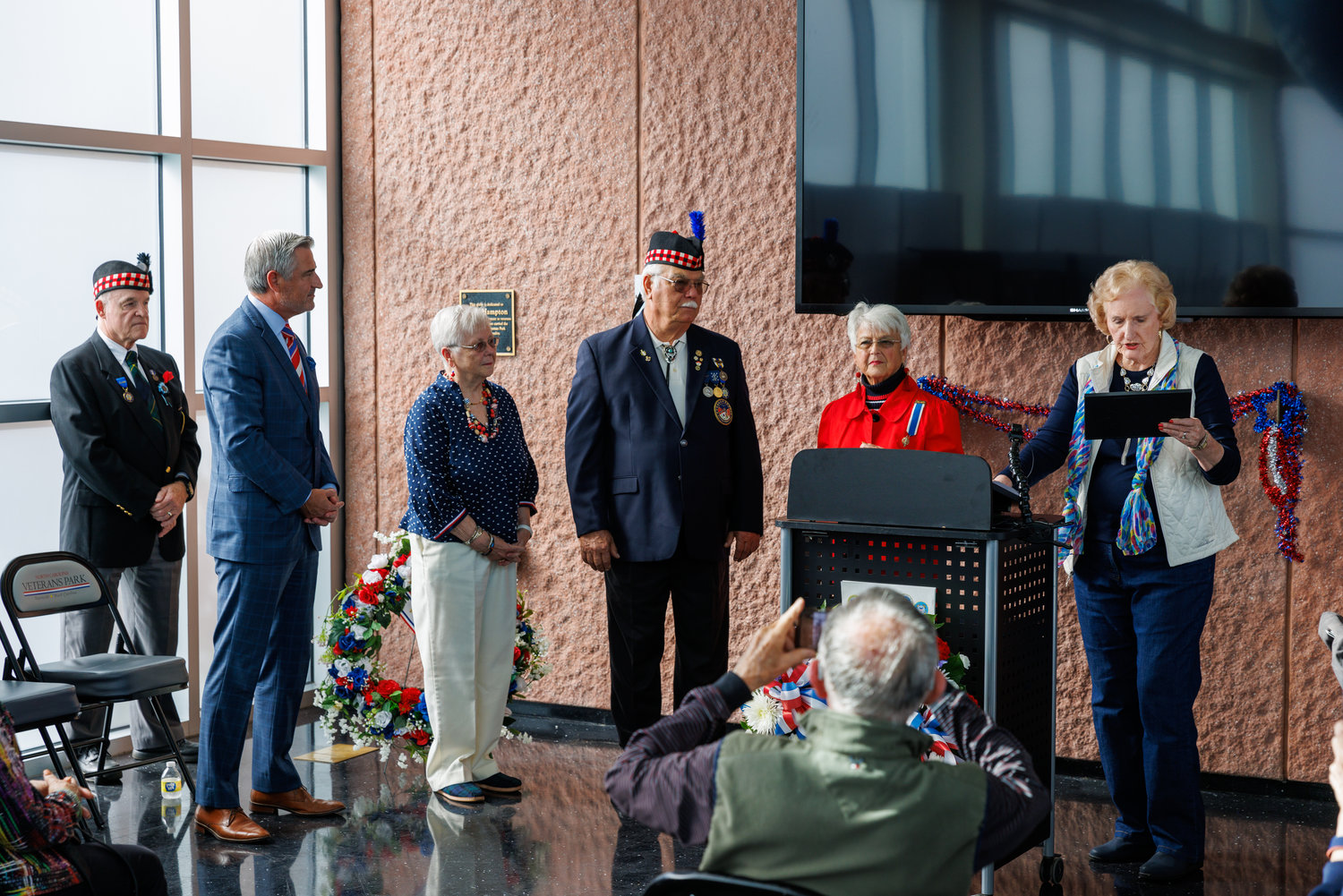 Don Talbot is recognized for his community service by The National Society of the Daughters of the American Revolution during the Blue Star Memorial Veterans Day Ceremony on Friday at the N.C. Veterans Park.
Anthony Wooten | CityView Media 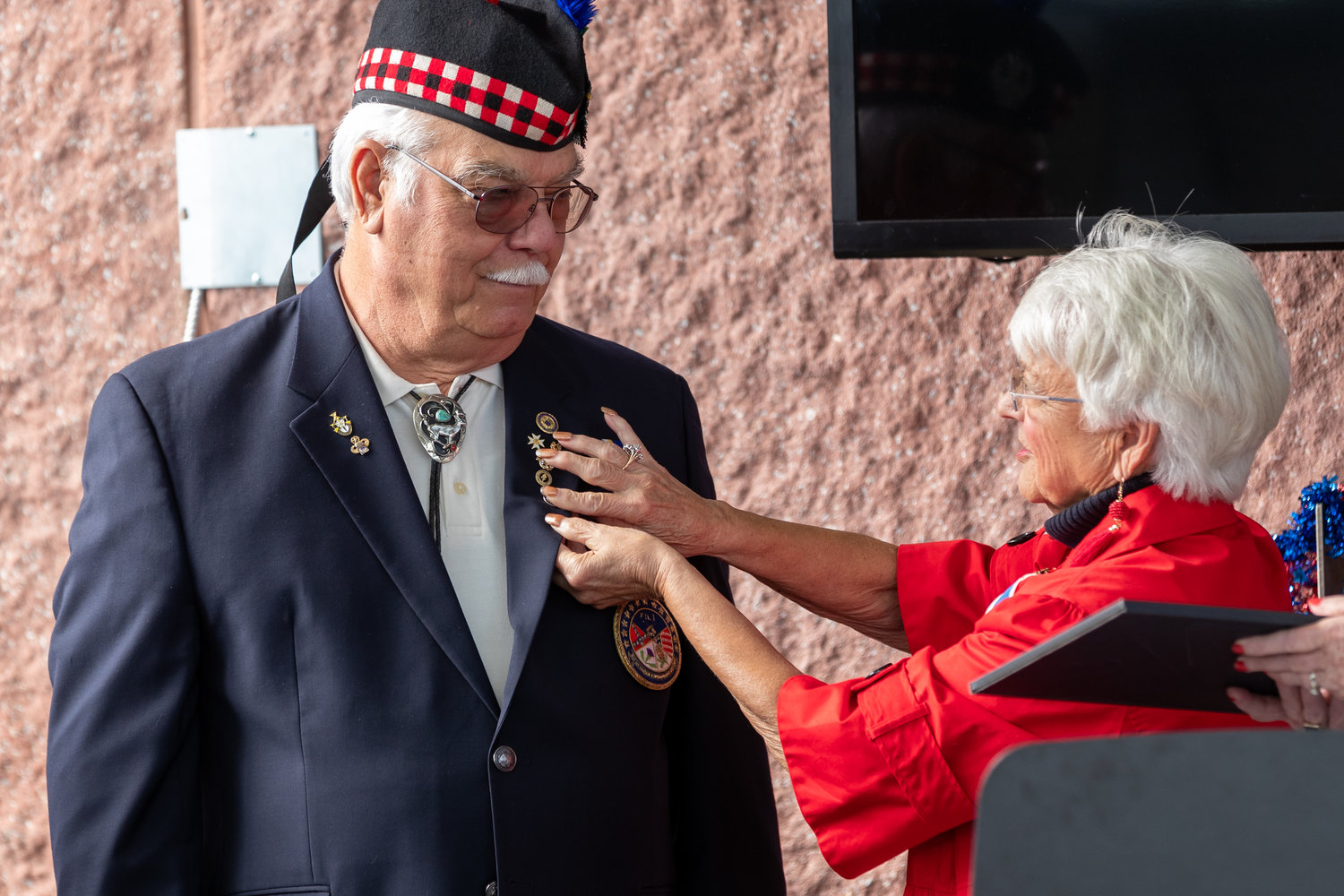 Don Talbot is recognized for his community service by The National Society of the Daughters of the American Revolution during the Blue Star Memorial Veterans Day Ceremony on Friday at the N.C. Veterans Park.
Tony Wooten | CityView Media 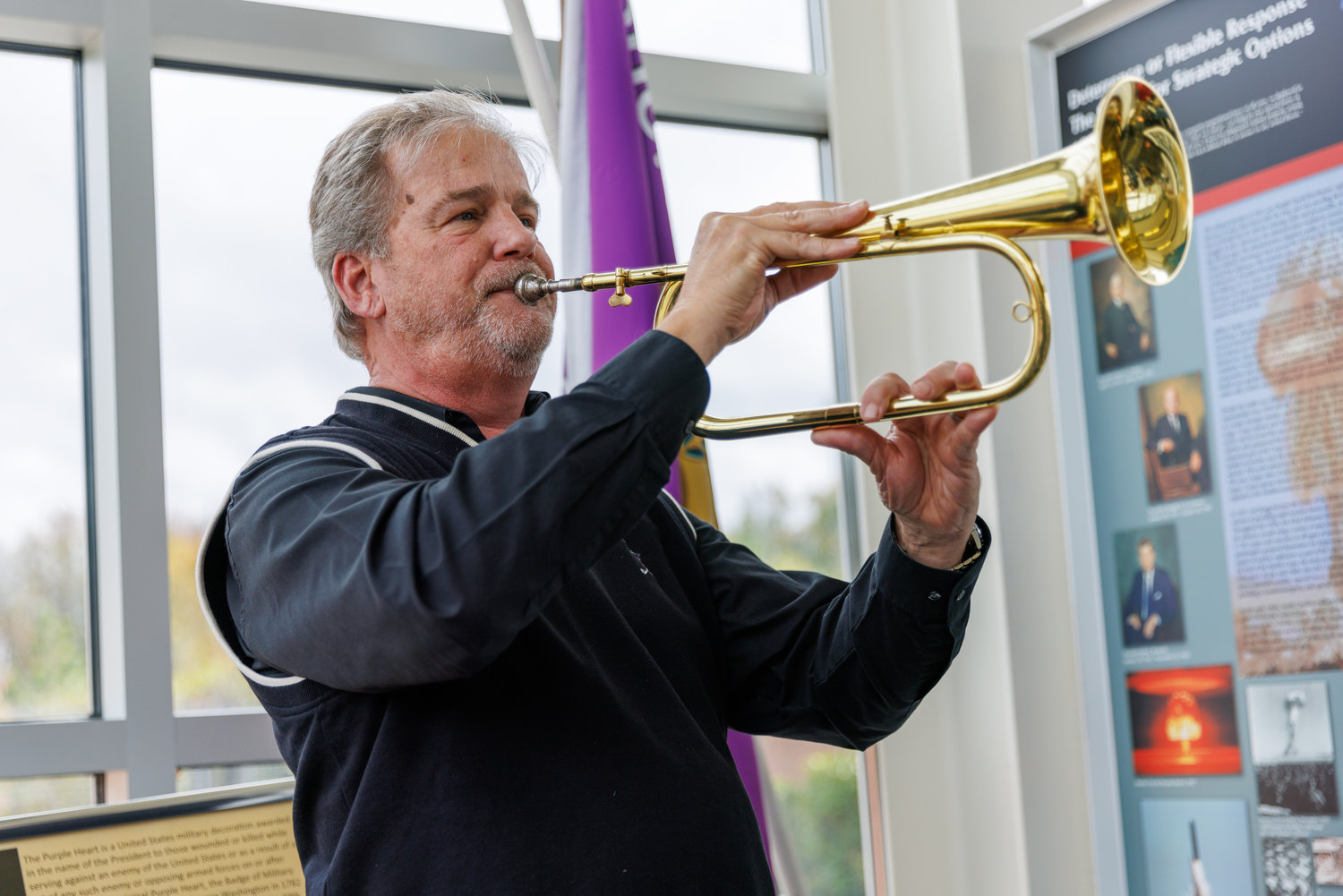 About 70 people gathered at the N.C. Veterans Park on Friday to show their appreciation to this country’s service members and their families. The Cross Creek Briarwood Garden Club sponsored the Blue Star Memorial Veterans Day Ceremony.

“It’s an honor to be here in this community to honor veterans,” featured speaker retired Col.  John Cook told his audience.

Cook, a 65-year-old former military chaplain and former pastor of Snyder Memorial Baptist Church, started his message with memories of his childhood. His father served in the 82nd Airborne Division at Fort Bragg.

“It was all about wanting to be like dad,” he recalled. “I guess you could say I was born to be a soldier.”

He remembered the personal sacrifices that he had to make while deployed to Saudi Arabia, missing Thanksgiving, Christmas, his wife’s birthday, his birthday. And despite missing out on celebrating those special occasions, he spoke of “the tremendous fulfillment of putting on the uniform.”

“If I could live my life over again,” Cook said, “I’ll do the same thing.”

And while he thanked veterans for their devoted service, Cook gave equal appreciation for the personal sacrifices made by their spouses and family.

He spoke of the 1991 miniseries “Band of Brothers,” telling the small crowd how “there is a special camaraderie among the people who answer the call of service to our nation and people. There is a camaraderie there that is special.”

“Band of Brothers” tells the story of Easy Company of the Army’s 101st Airborne Division and their experience in World War II Europe. Cook said it successfully gave people the chance to see up close the personal sacrifice made by people during their time in combat.

“It talks about the bonds that are established and shared among people who share that combat experience,” the retired pastor said. “I shared the same thing in my time in the Army.”

He concluded his remarks by giving “heartfelt thanks” to the military men and women.

That was followed by the playing of taps, a bugle call that is sounded as a signal for “lights out” at the end of a military day, during patriotic memorial ceremonies and military funerals conducted by the Armed Forces.

Because of the threat of inclement weather, the Veterans Day ceremony was moved from Freedom Memorial Park to inside N.C. Veterans Park.

Don Talbot, an 82-year-old Army veteran, was recognized and awarded a Daughters of the American Revolution certificate. Talbot founded Freedom Memorial Park at the corner of Hay Street and Bragg Boulevard and for years organized the city’s Veterans Day Parade.

“It would be inappropriate to bless a Texan,” Robert Tiffany said of Talbot, “but we will bless him anyway.”

That drew some laughs from the crowd.

Because of the weather, the traditional placing of the wreaths did not take place at the end of the ceremony.

Joan Bowen, 78, of Fayetteville, said the ceremony was very well organized and executed.

After the ceremony, she said, "I'm glad we were able to recognize all of his (Talbot's) work to get the park."