East Laurinburg will become an unincorporated part of Scotland County on July 1. DA not commenting on calls for prosecution of town official cited in audit for misusing funds. 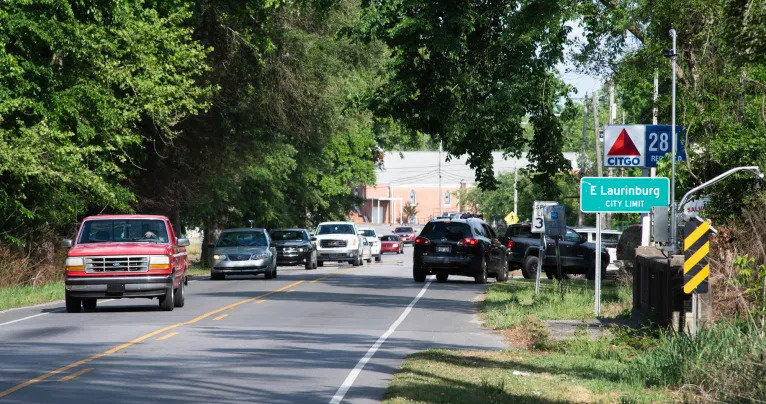 Even though the state Auditor’s Office released an investigative report last fall exposing financial violations of officials in the small town of East Laurinburg, an old textile mill town near the South Carolina border, the district attorney for Scotland County has so far declined to pursue a criminal case against the town’s former financial officer concerning the report’s recommended charges of embezzlement.

For the first time in North Carolina’s history, the Local Government Commission used a new law, Senate Bill 314, to vote unanimously to dissolve the town’s charter, which was scheduled to take place on June 30.

A month prior to the December vote, the LGC seized the town’s books and took full control of its meager finances.

State Treasurer Dale Folwell, who also chairs the LGC and last year urged the General Assembly to revoke the town’s charter because it had “ceased to function as a viable governing unit,” according to a November press release, said District Attorney Reece Saunders needs to bring charges against the former official.

“By doing so, it will hopefully discourage other elected officials, those who put their left hand on the Bible and raised their right hand in communities across North Carolina, to not do anything like this again,” Folwell said in a phone interview with Carolina Public Press last week.

Folwell, who oversees the state’s public pension funds, said a conviction is also necessary to forfeit her pension benefits for the years she was embezzling town funds, according to state law.

The 15-page report, published by State Auditor Beth Wood in October, found that former East Laurinburg finance officer Jennifer Lett used more than $11,000 of the town’s funds to pay personal utility bills and other questionable expenses. Of 28 checks signed by Lett, 22 were signed by her mother, Tyresa Haywood, who served as a town commissioner during the time period in question, according to the report.

The town, which will become an unincorporated community within Scotland County on July 1, has also failed to submit state-mandated annual audits since June 2016.

The state auditor’s report noted that its findings were referred to Saunders to determine whether sufficient evidence exists “to pursue criminal charges related to misappropriation of public funds.”

Saunders said he would again provide no comment when asked late last week whether his office will pursue the report’s recommended criminal charges against Lett; he also declined to comment in November.

No charges had been filed against Lett as of June 24.

Betty Robbins, 80, has lived in East Laurinburg since 1958. On a hot summer afternoon last week, she recalled the good old days of her childhood, when the town hosted a Fourth of July celebration every summer and the children played in the streets with little concern for their safety.

“It was a nice place to live; I raised my children here,” Robbins said. “You didn’t have to lock the door every time you left your house like you do now, because the way crime is. It’s terrible now.”

Robbins said she served as a town commissioner for four years in the early 2010s, when town officials worked well together and with the state to keep the books straight.

She thinks Lett must be held accountable and is frustrated with the district attorney’s office for not yet bringing charges against the town’s former finance officer.

The upcoming loss of East Laurinburg’s charter status is another tough pill to swallow, she said.

“You have a sign up there now that says ‘East Laurinburg City Limits.’ Now, what will we have? We’re in the county now,” Robbins said.

The LGC voted June 7 to transfer the assets of the town to Scotland County, following “major lapses in governance, internal controls and failure to submit an annual audit as required for five consecutive years,” according to a release from the treasurer’s office several days later.

“In the last municipal election write-in candidates were elected to four open seats because there was not enough interest among residents to lead the town out of its downward spiral,” Folwell said in the statement.

“The taxpayers of East Laurinburg were not being properly served by their elected officials, and it was unfair to them to continue paying taxes after years of substandard service.”

After June 30, the town’s property, cash assets, accounts receivables, taxes and debts will be transferred to Scotland County, which was expected to vote to accept the transfer at its next county Board of Commissioners meeting, the LGC said.

The commissioners unanimously voted June 21 to approve the LGC’s resolution. Chairman Whit Gibson said he and his fellow commissioners “felt collectively that it was the right thing to do,” even though there was no inherent advantage to the county for taking on the burden of managing the town’s properties and streets.

County Manager Kevin Patterson said roughly $30,000 was in the town’s cash reserves, and the county would manage the City Hall building and four other properties.

The county’s resolution outlined other assets that would come under the county’s control, including various pieces of furniture, one computer and other office items, kitchen appliances, landscaping equipment, two old trucks and an American flag.

He said the only direct financial obligation the county is accepting is to pay the bills for streetlight repairs.

Gibson said the county’s attorney warned he and other commissioners of a potential concern that could burden the county when it assumes control of the town’s properties: Both the LGC and the county are in the dark on the amount of the town’s outstanding debts.

End of one saga, but more may be coming

For Folwell and the LGC, the June 21 resolution signals the end of a long saga. But with six other towns and one sanitary district across North Carolina still under LGC financial control, others may soon follow the same path.

On June 10, a former finance director of another town under LGC control, Spring Lake in Cumberland County, was arrested and indicted on charges of misappropriating more than $500,000 of town funds.

Soon after, Folwell released a statement touting certain safeguard provisions in Senate Bill 265, which was passed by the N.C. Senate in May 2021 and is now sitting in the House Local Government Committee.

“One provision in there is that, after a certain period of time, if audits are not turned in on a timely basis as required, that the city or county’s sales tax refund can be withheld,” Folwell said.

“For the state of North Carolina to require people to do audits and then there’s no consequence for failure to meet that obligation is also unacceptable. The fact is that the right types of audits could have caught these types of violations hundreds of thousands of dollars ago.”