Amy Cannon, ending 32 years of public service, thanks the team that made it possible 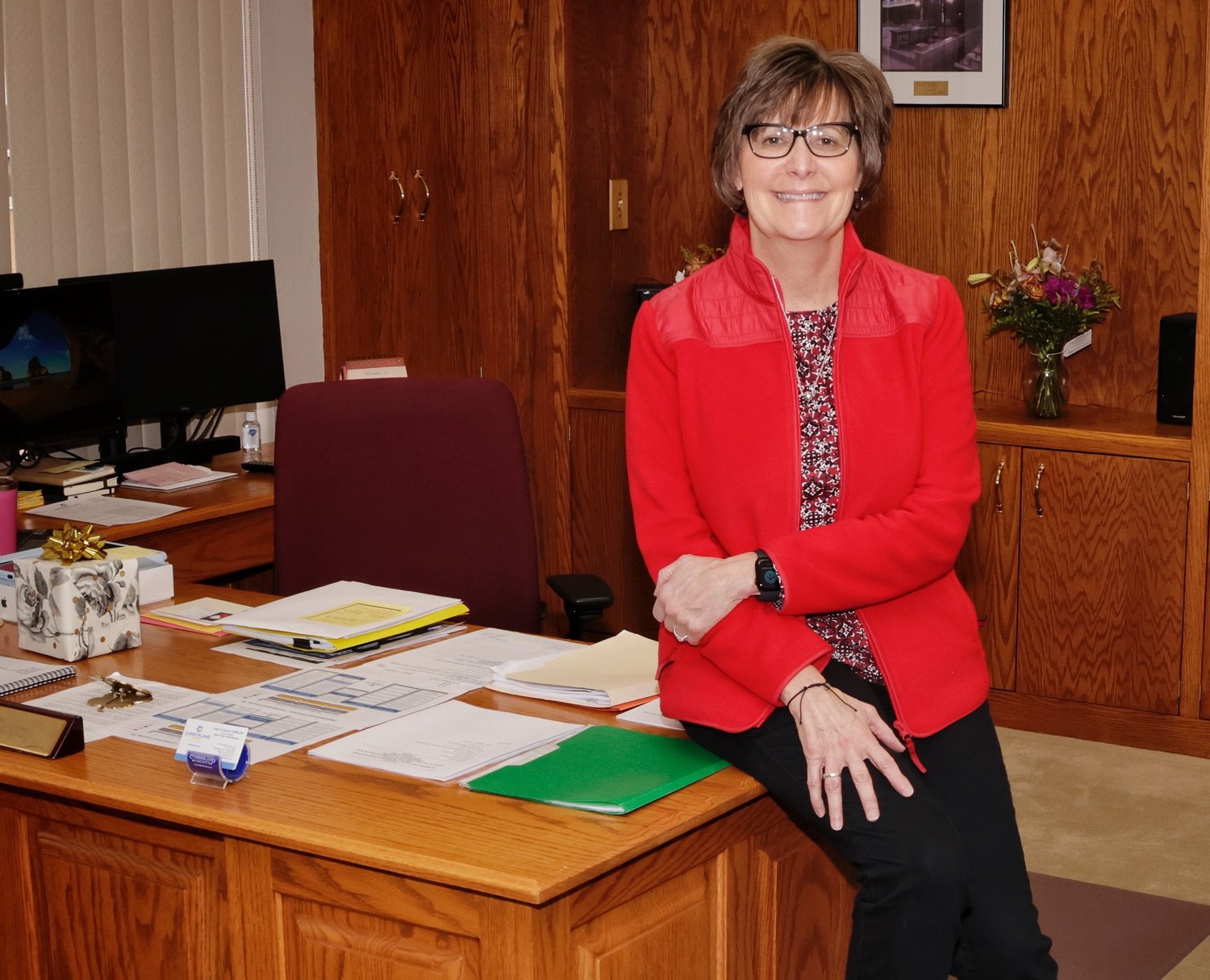 Amy Cannon, who is retiring as Cumberland County manager, says instituting policies to ensure financial stability was among her proudest achievements.
Photo by Jason Brady 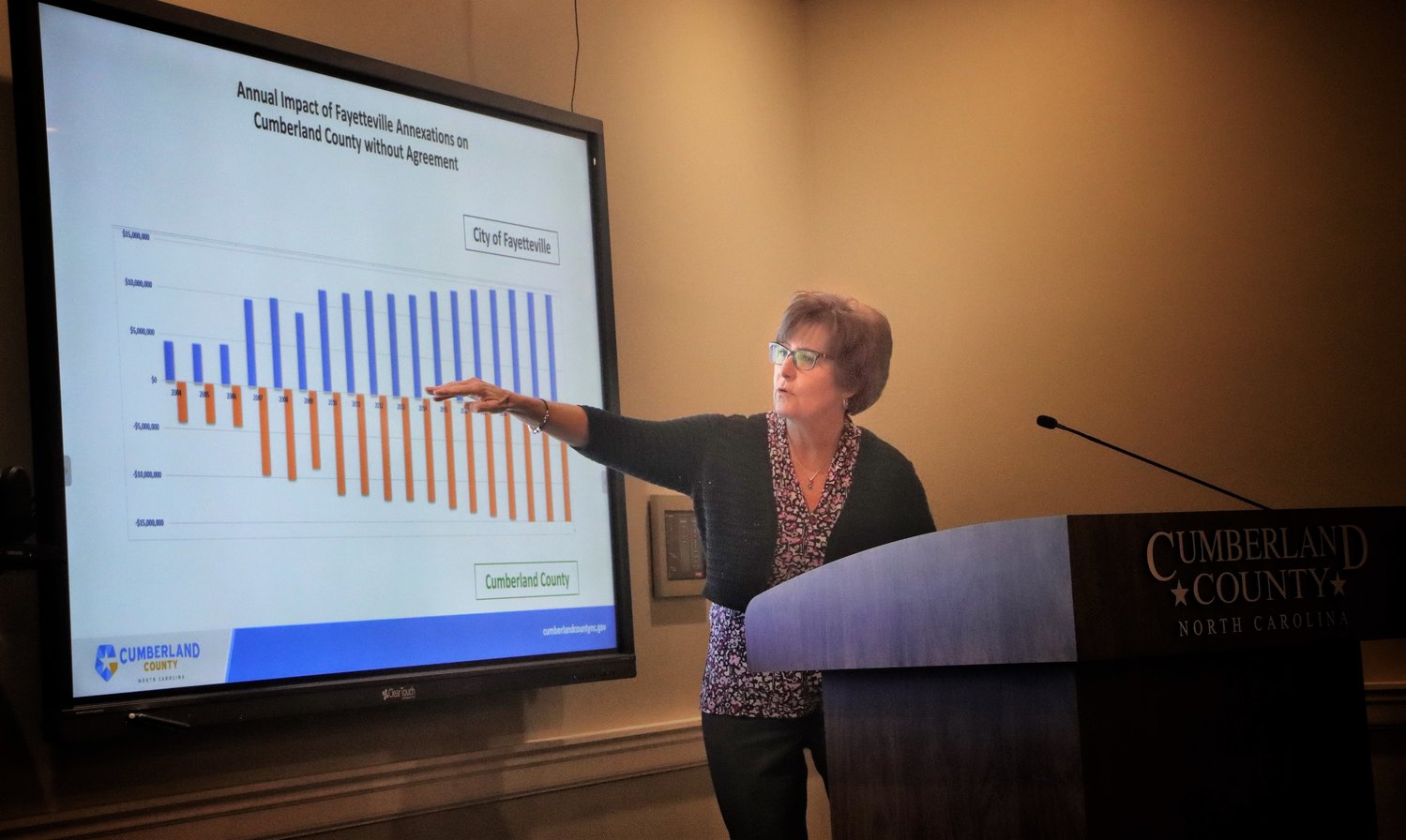 Amy Cannon makes a presentation during her final meeting with the county commissioners as Cumberland County managaer.
Photo by Jason Brady 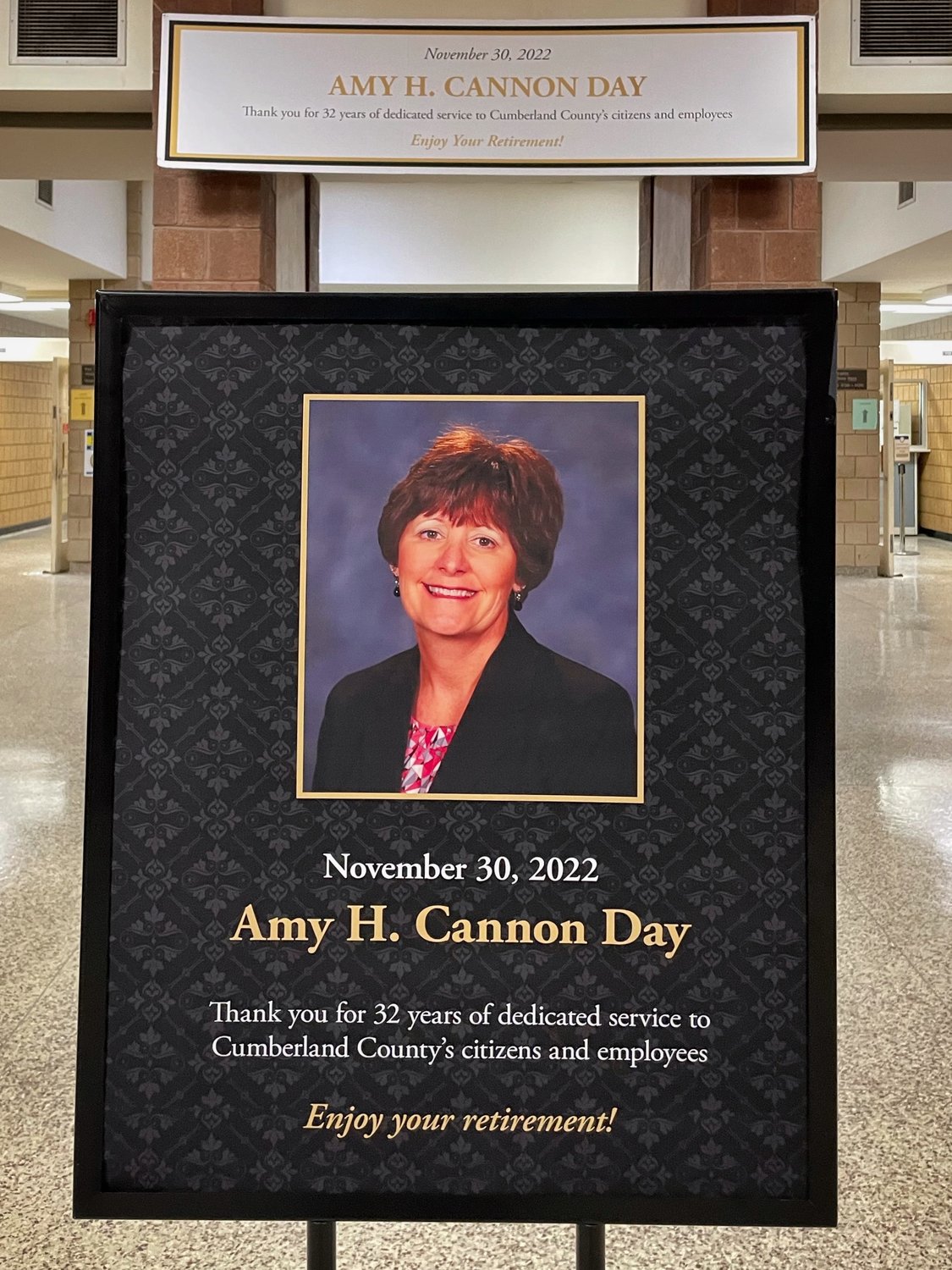 I could not have done this job without the grace of God, my family, and an extremely supportive workforce.”
Amy Cannon, retiring as Cumberland County manager
By Jason Brady

If you happened to be at the Cumberland County Courthouse, it was hard to miss the news that Wednesday, Nov. 30, was Amy H. Cannon Day.

On every floor, a huge poster display in the area of the elevators thanked Cannon for 32 years of service.

The Cumberland County Board of Commissioners had proclaimed the day in her honor.

Cannon has been the Cumberland County manager for the past eight years. Unlike the departures of many chief executives in public service these days, hers was civil. She did not get fired on the whim of an elected body. And she’s not packing her belongings to head to some faraway place.

Instead, Cannon is retiring amid a host of accolades from the county commissioners who hired her and the fellow employees she worked with. The Fayetteville native grew up in the Cliffdale Road area of Fayetteville and graduated from Seventy-First  High School in 1983.

Commissioner Jeannette Council said Cannon was good at her job. And she had to be: She was a woman at the helm of one of the largest counties in North Carolina, Council said.

At one of Cannon’s last meetings as manager, those three commissioners were asked to present her with awards because they were on the board when it hired her as manager in 2014.

Cannon acknowledges that being a native and having the opportunity to serve 32 years in local government doesn’t happen often.

“Not many managers have the opportunity to service in their own community,” she said.

She plans to stay right here in Fayetteville and spend some quality time with her family: her mother; two sons; a daughter-in-law who she says is like the daughter she never had; and an 8-week-old grandbaby.

Cannon started her final morning as manager visiting employees in the tax department and thanking them. She said other goodbyes and thanked employees; had lunch with her administrative staff; and honored her assistant county manager, Tracy Jackson.

Cannon credits her team with any success she’s had, referring to them as “dedicated public servants.”

Her fifth-floor office overlooks the parking lot where the county commissioners, just days before her last day, decided to build a 69,000- to 89,000-square-foot multipurpose center that they say will be a downtown showpiece to replace the aging Crown Theater and Arena, located just off U.S. 301.

“I am very excited about the Crown Event Center,” Cannon said. “I’m excited to have had a part in it. It’s going to be transformational for our community. The next step is for the county to hire a construction manager.”

Cannon said to be successful as a public servant and leader, one must “feel the burden of those you represent.” That includes understanding the pressure on elected officials who may have come into office with a specific agenda or passion for a certain project.

“I always understood their burden. (The commissioners) make difficult decisions. The needs often outweigh the resources. And, at the end of the day, they are the policymakers.”

Looking back over her career, Cannon reflects on her accomplishments as well as the things she wanted to get done before she left.

The one project she wishes she could have seen to completion is building a homeless shelter.

“Homelessness is a significant issue. I do wish we were further along to providing a solution to homelessness,” she said.

The county is working to acquire land to build a homeless center. It’s one of the commissioners’ top priorities, she said.

Cannon believes one of her successes was achieving financial stability in county government.

“It’s something I’m extremely proud of,” she said.

She recalls the dire years of 2012 and 2013, when the federal government shut down. County sales tax revenue plummeted in part because the military quit contracting with local vendors. When she became manager, she initiated stringent measures to ensure financial security, setting aside money for just such economic downturns.

“When I became manager, I put into place some long-term capital plans. We set aside funding for capital projects so we didn’t have to raise taxes and the money would be there,” she said.

“I’m so proud the board adopted those measures and embraced them and followed through on them,” she said. “It went a long way to stabilize the county financially and to weather upcoming storms.”

Setting money aside for a rainy day paid dividends in 2017, the year the county underwent a property revaluation. Property values declined in Cumberland County that year, which resulted in a drop in tax revenue.

“That never happened before. There was a $5 million shortfall in property taxes that year,” Cannon said.

Cannon recalls the difficult decisions that faced her management team. They included cutting jobs, slashing department budgets, and asking the commissioners to pass a small tax rate increase. But that needed to be done to ensure the county’s financial integrity and that it could weather economic storms.

Some of the economic storms came in the form of hurricanes — first Matthew in October 2016, then Florence in September 2018. Cannon said Hurricane Florence resulted in historic flooding in Cumberland County.

In the midst of recovering from the lower property revaluation and the devastation caused by Hurricane Florence, the county faced another economic disaster.

“Then came the pandemic, another historic event,” Cannon said. “Those were significant events, and we survived each one of them.”

Cannon graduated from UNC-Charlotte in 1987 with an accounting degree. An on-campus interview landed her a job with Cherry, Bekaert and Holland, a Raleigh-based accounting firm. At the time, the firm was hired to conduct annual audits for both Cumberland County and the city of Fayetteville.

For the next several years, Cannon’s employers had her delving into local government finances, giving her what she calls “a great foundation” in the budget process. She moved on from the accounting firm to become the city of Fayetteville’s internal auditor, giving her more experience.

But soon she was hired as a county budget analyst. Eight years later, in 1998, she became the county’s finance director. In 2000, then-County Manager James Martin appointed Cannon to a dual role: finance director and assistant county manager.

“It was the best of both worlds: finance and budget, and an opportunity to grow in a leadership role,” she said.

Looking back over her years with the county, Cannon says her successes came from the people who worked for her.

“I could not have done this job without the grace of God, my family, and an extremely supportive workforce,” she said.

For the rest of the month, Cannon plans to reconnect with friends and spend time with her family. In January, she hopes to start several home projects that have been waiting on the wings.

And at some point, she said, she may reach out to colleagues in local government seeking part-time work.

“When you have public service in your heart, you can’t cut it off after 32 years,” she said.