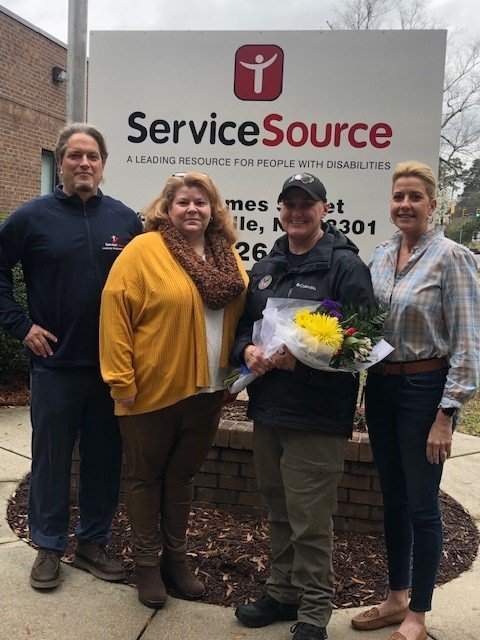 Stacey Buckner, who was born and raised in Fayetteville, loved the outdoors and nature as a little girl and later found it would be a huge part of her life.
Stacey works at the Veterans Affairs Medical Center on Ramsey Street as an employee through ServiceSource, a leading organization for individuals with disabilities.

Stacey was nominated for Volunteer of the Year through United Way of Cumberland County. United Way selected ServiceSource’s submission to apply for the Governor’s Medallion Award. Stacey was selected as a winner.

Stacey was recognized during a virtual awards ceremony on Wednesday.
Stacey had a stroke several years ago, leaving her with a traumatic brain injury. She has never let her disability hinder her from helping thousands of veterans each year.

Stacey is not a veteran but comes from a family of veterans. Stacey found her passion to help veterans in need and the homeless while working in her part-time AbilityOne job at the VA.

In her nomination for Volunteer of the Year for Cumberland County, ServiceSource’s director of regional philanthropy, Tara Hinton, had this to say about Stacey:

I remember the first time I talked with her. She had just returned home from driving the ashes of a fallen soldier whose family had unfortunately lost the urn in storage. She heard about this and asked if she could bring him home. She gathered a full group of veterans and active military members to help escort him back to Pennsylvania, with a welcoming alongside the roads of his community as they arrived. I knew then Stacey was one in a million.

Every day after work and every Friday, her day off, Stacey would put together hundreds of hygiene kits to pass out to the homeless in our community. She found one of the largest gatherings behind a local strip mall. She came to know them well. One day a lady in the group looked at the soap in the kit and said, "What am I supposed to do with that?" Realizing that finding showers was a large problem for the homeless, Stacey came up with an idea and outfitted her Jeep with a shower, washing machine, grill and more on her own dime and time.
Every Friday, she loads up 40 gallons of water into the shower tank and goes to multiple homeless areas to provide food, hygiene kits, hot showers, wash their clothes and simply care about them.

ServiceSource has embraced her tremendous volunteer efforts outside of the already amazing job she does at the VA through the organization she created in 2016 called Off-Road Outreach. She has built an amazing garden at our office called "Veggies for Vets," providing free fresh produce to homeless and at-risk veterans, feeding over 100 per month. She recently held "Trees in Memory" at the gardens to memorialize the recent 13 fallen servicemembers and honor all future ones. Stacey's family knows to expect her to be late at holiday dinners because she is out in the homeless community making sure they have a hot holiday meal first.

Most recently, Stacey created the inaugural "Day of Giving" held this past Jan. 10 at Fayetteville Operation Inasmuch in partnership with ServiceSource, the Fayetteville Woodpeckers and Mission BBQ. Stacey was able to have hundreds of hygiene items and new warm clothes, blankets, gloves and more donated for "Back Packs for Patriots." Over 120 homeless and at-risk veterans and individuals had a hot lunch, a shower and received items of need with tears rolling down their faces in graciousness.

And it all started with her, and she finds a way to do this every week all over our community time and time again. She has been in multiple newspapers, magazines and more. But she doesn't do it for that. In fact, she says no to that as much as possible. But we could never say no to anyone who would be willing to share what she does for our veteran/homeless community and honor her.
Like clockwork, they know Stacey is coming out every Friday and they will get a chance to be clean, full and loved. I could write for hours about all that she has done this past year, let alone the past five years, and the things she has planned. But I know I'm limited in space here.

I’ve worked alongside Stacey these past five years and volunteered with her many times. I’ve never once heard her complain about her disability or anything at all. I assume she has bad days like all of us, but you would never know it. If you ask Stacey why she does what she does, she would say, "I just want to provide a basic human need everyone on this earth should be entitled to … food, a hot shower, love."