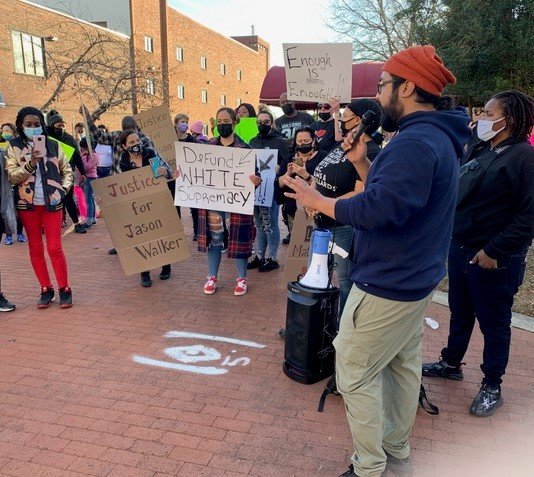 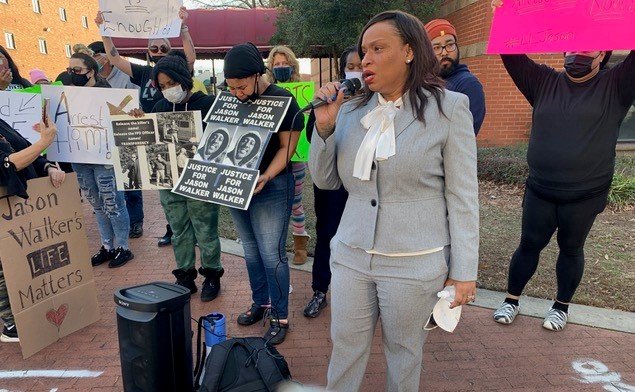 About 100 people marched through downtown Fayetteville on Sunday demanding justice and an arrest after Jason Walker was shot and killed by an off-duty Cumberland County sheriff’s deputy over the weekend.
Photo by Bill Kirby Jr.
Previous Next
Posted Monday, January 10, 2022 4:38 pm
By Michael Futch

The Cumberland County Sheriff’s Office said Monday that an off-duty deputy who was involved in a fatal shooting over the weekend has been placed on administrative leave pending an internal investigation.

The Fayetteville Police Department said 37-year-old Jason Walker ran into traffic and jumped onto the deputy’s truck on Bingham Drive near Shenandoah Drive in west Fayetteville shortly after 2 p.m.

Walker was pronounced dead at the scene, police said.

Police Chief Gina Hawkins and Cumberland County District Attorney Billy West said the case has been turned over to the State Bureau of Investigation.

The deputy was interviewed by police after the shooting, Hawkins has said. She said she did not know the caliber of weapon used or where Walker was hit when he was shot.

On Sunday, about 100 protesters marched through downtown Fayetteville demanding justice and an arrest in the wake of Walker’s death.

Members of Walker’s family, a witness to the shooting and community activists were among those who spoke in front of the Police Department demanding that the off-duty deputy be arrested.

At a news conference Sunday, Hawkins said peaceful protests are welcome. She also asked people to have patience.

Anyone who witnessed the shooting or who has video is asked to contact the SBI Southeastern District office at 910-778-5724 during business hours or 800-334-3000 after hours.