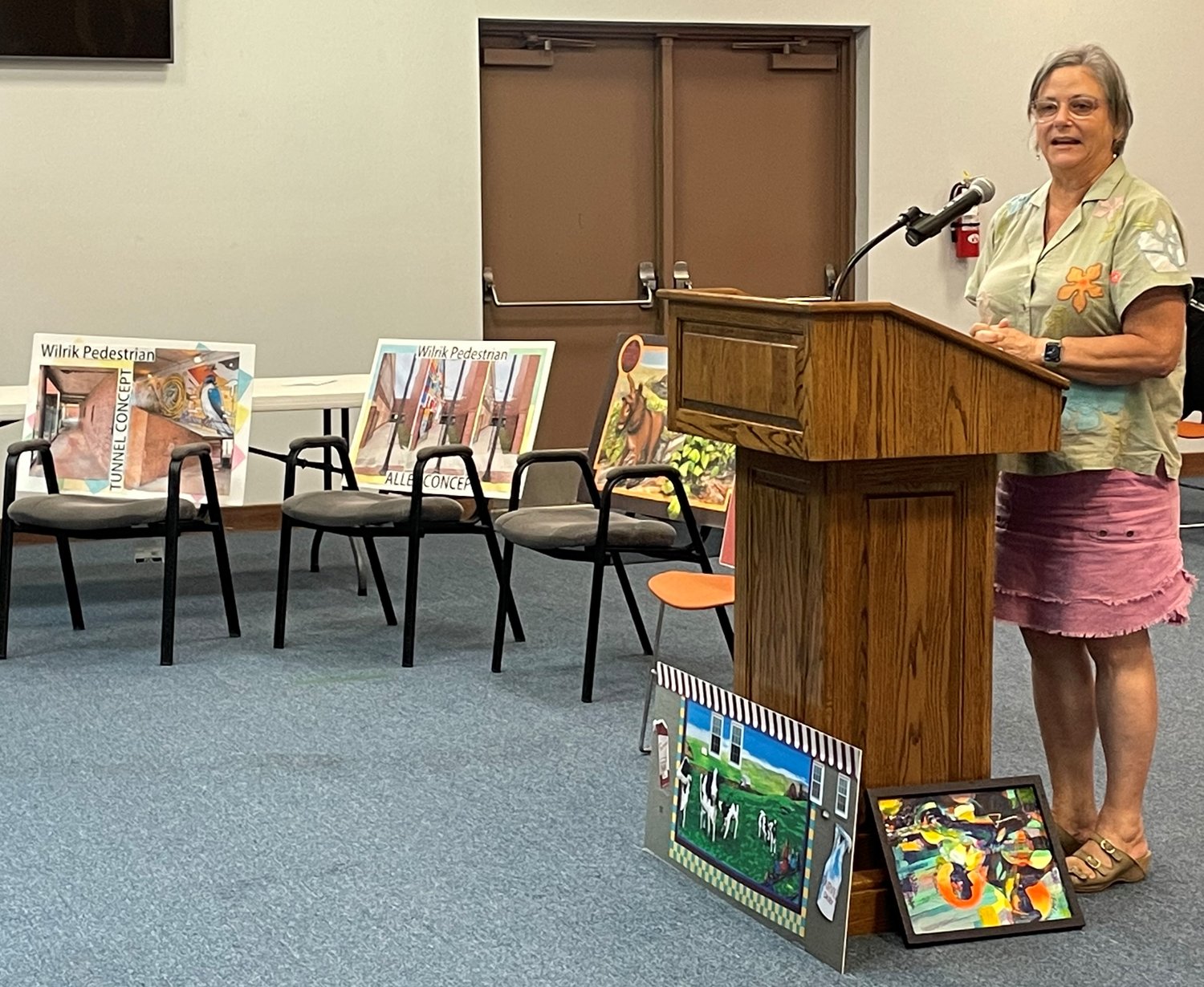 Liz Whitmore, the historic preservation planner for the city of Sanford, talks with the Spring Lake Board of Aldermen on Monday night about how Sanford has been able to bring public art, including murals, to that community.
Photo by Jami McLaughlin
Posted Monday, August 8, 2022 11:11 pm
By Jami McLaughlin

SPRING LAKE — The Spring Lake Board of Aldermen heard from the Local Government Commission on the status of the town’s finances and received a public art presentation from the city of Sanford during its work session Monday night.

David Erwin, the town finance officer and accounting and financial management advisor for the Department of the State Treasurer, went over the latest financial report for the town.

Erwin said the numbers look better than they have in previous years and gave credit to town employees for being able to stick to the outlined budget.

He also said the town’s biggest revenue would be sales tax. However, sales tax has a two-month lag and Spring Lake would not know until September what those numbers would be. Those figures will be needed to prepare for the audit that is due in October.

“When the audit is done, it will really tell us where things are in terms of building the fund balance and once we have that, what the action plan is to keep building,” Erwin said.

Mayor Kia Anthony asked where the town was in regards to the audit, and Erwin said they were able to hire a new accounting person, which he hopes will help keep the town on track for the audit deadline.

“It was hard to keep up with the day-to-day stuff and now we think with this third person, we will have the day-to-day under control and there will be capacity to do more work on the year-end,” Erwin said.

“We have some things to do and document before the auditors can come in and do their job,’’ he said. “We are pushing to get that done.’’

The audit deadline is Oct. 31, but there is a grace period for municipalities to Dec. 1.

The board also heard from Liz Whitmore, an historic preservation planner for the city of Sanford. She brought several large poster boards of murals that have been painted in Sanford since 2015 and shared how Sanford has been able to bring public art to their city.

“The Appearance Commission over the last couple of months has been working on having some sort of design, maybe a mural, that can elevate the appearance of our town,’’ said Alderman Raul Palacios. “The city of Sanford is not here because they are proposing to do any work for the town, they are here to offer what they have been able to accomplish.’’

Whitmore spent a good portion of the meeting outlining the request for proposal process to include project goals and scope, how they raise money to pay the artists, the contracts used to commission the artists and the agreements for permanent easements.

Whitmore said there are several avenues to find money to finance public art. Before the meeting Monday, she said Spring Lake would be looking at a minimum of $10,000 to $15,000 to commission an artist for a small mural.

She also cautioned the board to use professional artists with a proven track record and to choose a mural design idea that would be more interactive for the community.

“I have no problem sharing because I want the world to be beautiful,” she said.

Fredricka Sutherland, chairwoman of the Appearance and Sustainability Commission, said after the meeting that she loves the idea of the murals and also wants to see town employees address the basic appearance of Spring Lake so the murals would be able to attract more people to move to and visit the town.

Sutherland spoke during the public comment portion of the meeting about how the town needs to enforce ordinances and take care of addressing town-maintained rights of way. She said there are several places that need to be mowed and trees that need to be cut back for safety reasons.

She said Spring Lake has the highest rate of taxes in the county and services are not matching up with those taxes and water bills are rising.

“We want to make sure our services continue to be above and beyond,” Sutherland said.

Sutherland encouraged residents to attend board meetings to voice their concerns.

Interim Town Manager Joe Durham said the problem with trash pickup was due to an issue with the contracted service and asked residents to be patient as they work through the problem.

Alderman Marvin Lackman also asked Durham to look into getting the street sweeper repaired. Lackman, Palacious and Alderwoman Adrian Thompson have been spending their Saturdays in Spring Lake targeting various areas to clean up trash and bulk items. This past Saturday, they collected 18 bags of trash, which equated to 360 pounds.

Also on Monday, Town Attorney Michael Porter addressed the town’s ability to release body camera footage from an incident in 2020 involving the Police Department. Two officers and a woman were shot after police tried to arrest the woman and her fiance by having an officer pose as a pizza delivery man. The incident recently resulted in a $3 million settlement with the woman, Sabera McNeil.

Porter said the general statutes are very clear on how body camera footage can be released and that only certain people could obtain permission without a court order.

The board also went into closed session under the general statute for personnel. Erwin joined them in closed session. The board came out after an hour with no action taken.

Jami McLaughlin covers Spring Lake for CityView TODAY. She can be reached at jmclaughlin@cityviewnc.com. Have a news tip? Email news@CityViewTODAY.com.