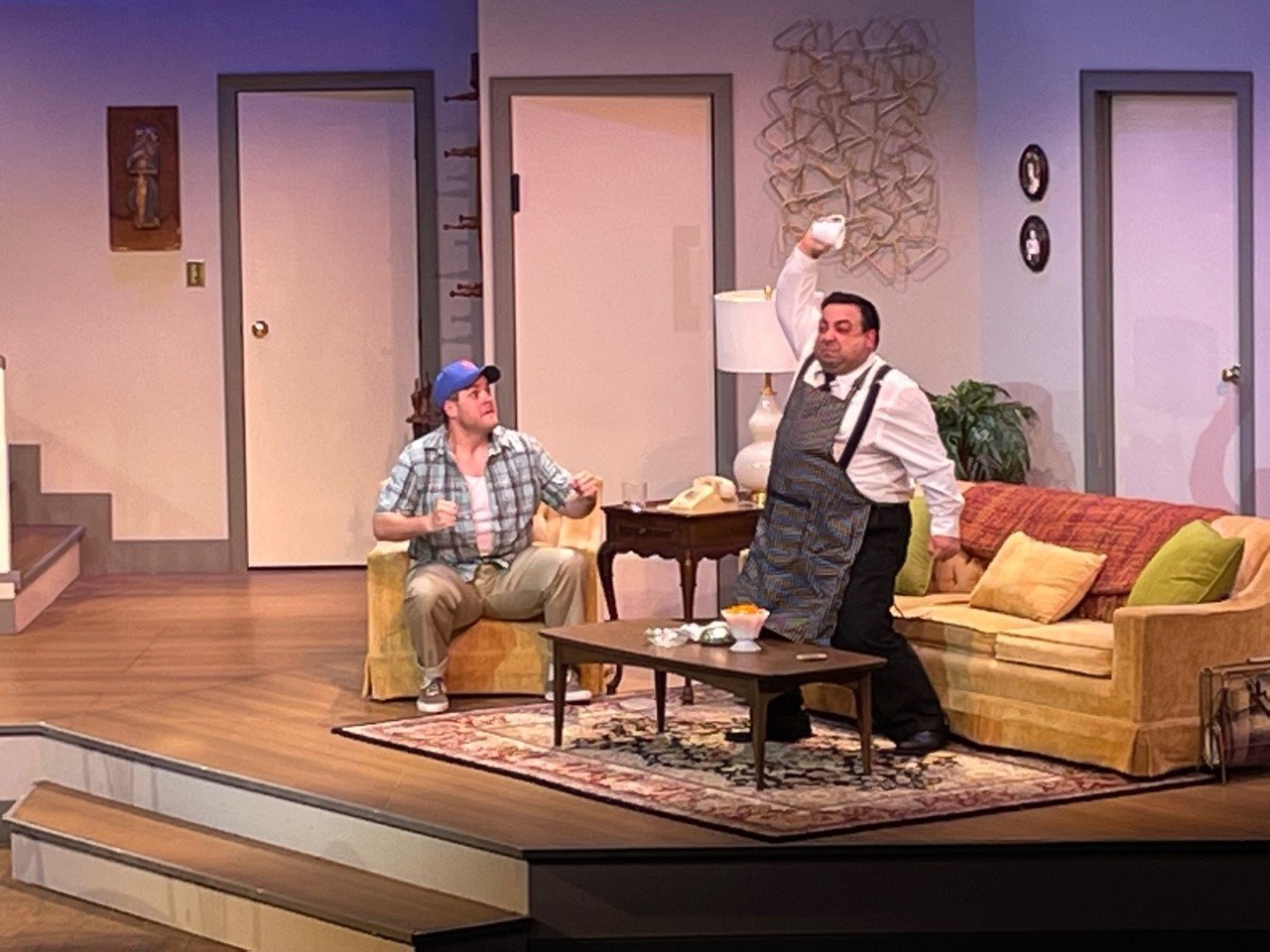 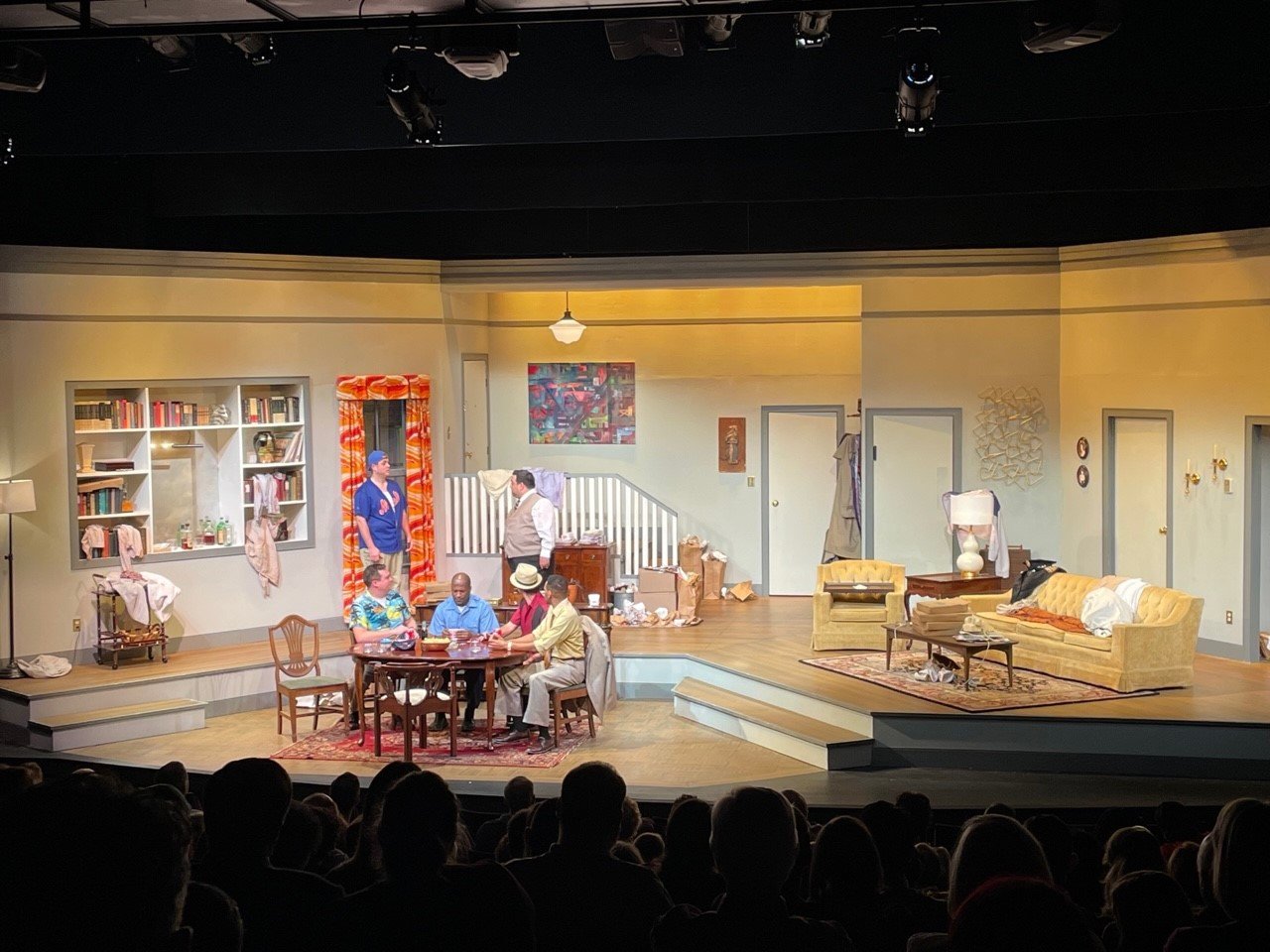 Oscar, Felix and their friends play poker on Fridays. The stage is set for a New York apartment in the '60s.
Photo by Jason Canady 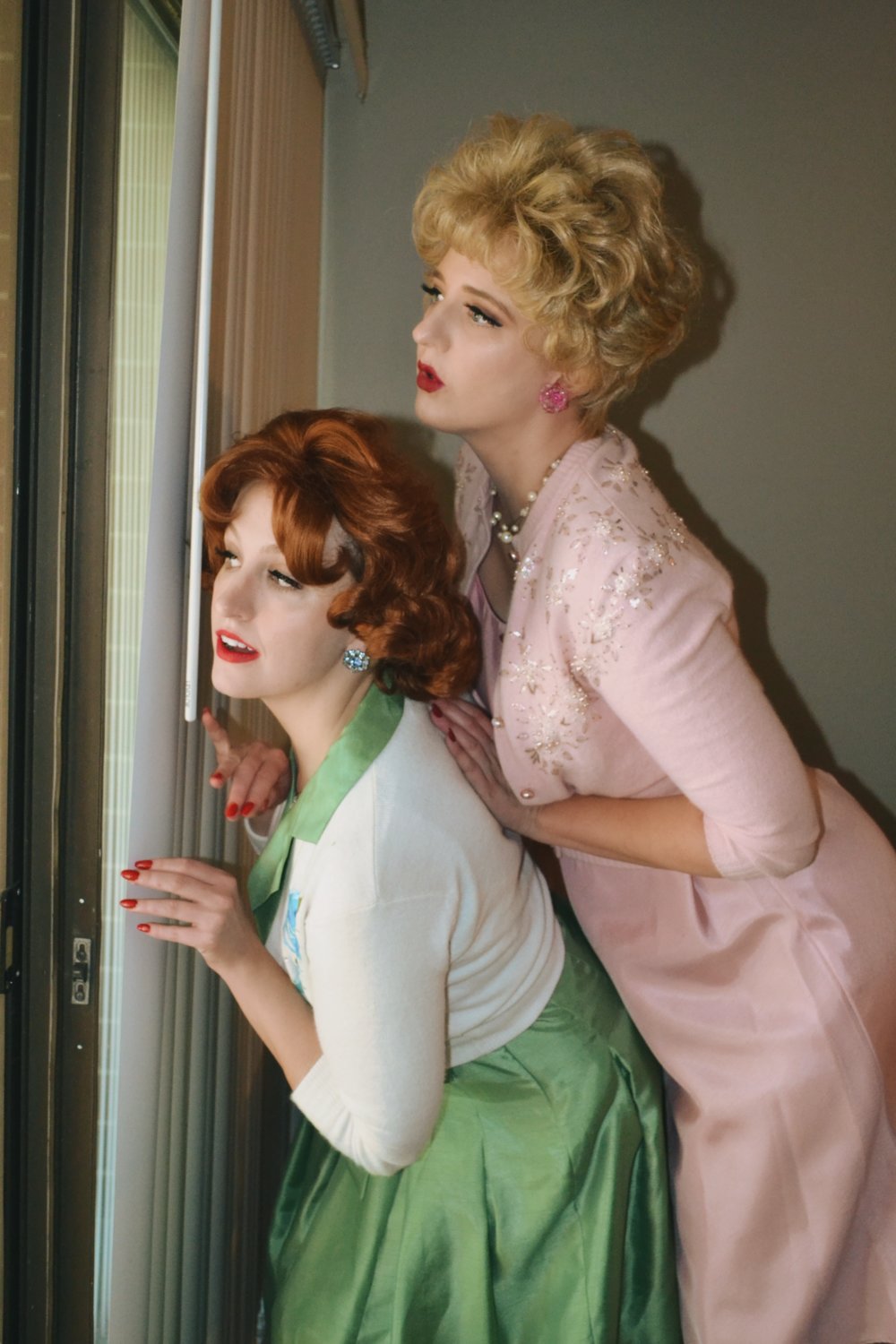 Editor's note: This story has been updated to correct the spelling of Matthew Stuart Jackson.

Audiences can see a special showing of Neil Simon’s 1965 Broadway play “The Odd Couple'' for a limited time at Cape Fear Regional Theatre. You don’t want to miss this special production, which runs through Nov. 13.

CFRT Artistic Director Mary Kate Burke secured the rights to the play and brought it to the Fayetteville audience. “The Odd Couple’’ is directed by David Hemsely Caldwell. This is Caldwell’s fourth production at CFRT.

Concha’s and Judge-Russo’s real-life personalities seemed opposite as their characters, Felix and Oscar, but the stage chemistry of the two actors pairs well, possibly due to their friendship off the stage. The contrast offers fresh laughs and interesting new dynamics to the classic play.

Felix, who labels himself “fastidious” and who most would label a neat freak, is a news writer for the CBS network. Felix becomes separated from his wife and children due to his smothering habits. Oscar, who is already divorced and estranged from his wife and children, lives alone and prefers to live his life with a come-what-may attitude. Oscar lives like a slob and loves to hold poker tournaments with his buddies in his “eight-room apartment” with its one window.

Oscar and Felix have been friends for years, so when Oscar hears his friend is homeless and having suicidal thoughts, Oscar invites Felix to live with him. Oscar wants to show Felix there’s life after divorce and hopes to change the man from fastidious to easy-going. But Felix can’t and won’t change.

It doesn’t take long before the contrasting personalities cause friction and Oscar realizes he got more than he bargained for by inviting his friend to live with him. Sometimes, friends don’t make the best roommates.

The often adult-oriented puns and jokes are numerous and not only had the audience laughing often but sometimes long after the jokes ended. At one point, I sensed both actors struggle for a moment to not break character as they enjoyed the humorous moments themselves. The cast for “The Odd Couple’’ is relatively small, with eight actors for the entire stage production.

Concha, who won Fayetteville hearts with his roles in “Shrek’’ and “Clue,’’ was brilliantly matched for his role and received applause from the audience when his character first entered the stage.

Concha’s unique personality, snippy delivery and knack for expressive facial expressions really brought the up-tight, bow-tie-wearing Felix to life. Judge-Russo, who was personally invited to CFRT by Burke, took a break from his television and film roles and made the trip from New York to portray Oscar. Judge-Russo made the messy life of Oscar Madison come to life and the character’s stress level palpable for the audience.

Rounding out the cast were Oscar's Friday night poker buddies played by Moses Alexander Green (Roy), Louis Jacques (Murray), Miles Snow (Speed), and CFRT’s own Matthew Stuart Jackson (Vinnie). Oscar’s poker buddies offered a great supporting cast and generated laughs one might expect when guys get together to have some fun, win money and have a night away from their wives.

But the Pigeon sisters, played by Lilly Nelson (Gwendolyn Pigeon) and Emma Taylor Miller (Cecily Pigeon), almost stole the show Saturday night. The performance of the English-born characters shone bright and gave the show a boost of energy the moment they walked through Oscar’s door.

Oscar, who needed a night of laughs and fun and who thought Felix could use the same, invited his neighbors from upstairs back to their apartment for a double date and for some female companionship. The American actresses Nelson and Miller performed the roles of the divorced and widowed women with expert showmanship and received some of the biggest laughs of the night.

Upon entering the auditorium, the audience will see that the CFRT stage has been converted to a fully furnished New York apartment from the 1960s era. The construction of the stage is realistic as a small New York studio apartment and even has hardwood floors, a swinging kitchen door, and step down into the living area. The lighting and stage set were masterfully created by the creative team at CFRT and is world-class. You’ll feel like you’re in the studio audience of a tape-for-performance television classic sitcom set.

Saturday’s audience enjoyed the show and left with glowing energy and a spring in their step. I recommend this show. “The Odd Couple’’ offers a much-needed break from your everyday reality and provides a night of hysterical laughs with its unique situations. But don’t wait, the show is a limited run and tickets are quickly selling out.