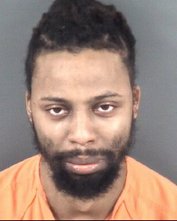 Thurman Lesley Brewer, 26, of the 900 block of Stewarts Creek Drive, was charged with attempted first-degree murder after a woman was thrown from a 3rd-floor balcony early Thursday, according to Fayetteville police.
Fayetteville Police Department photo
Posted Thursday, November 10, 2022 11:00 am
A staff report

(Editor’s note: This story has been updated with charges filed against Thurman Lesley Brewer and other details.)

A woman suffered life-threatening injuries when she was thrown from the third-floor balcony of a condominium early Thursday, according to the Fayetteville Police Department.

A domestic disturbance was reported just after 1 a.m. Thursday in the 900 block of Stewarts Creek Drive, according to a news release. When officers arrived, they saw a man fleeing from the area and detained him, the release said.

Witnesses told investigators that the man threw a woman from a third-floor balcony at Stewarts Creek Condominiums.

Officers cleared the residence but were initially unable to locate the woman, according to the release. After a search of the area, they found her about 20 feet into the woodline of the property suffering from severe head trauma.

An Emergency Medical Services crew took the woman to the hospital in critical, life-threatening condition, the release said.

Juveniles who were found inside the residence were safe and were in the custody of the victim’s immediate family members, the release said.

Thurman Lesley Brewer, 26, of the 900 block of Stewarts Creek Drive, was arrested and charged with attempted first-degree murder; assault with a deadly weapon with intent to kill inflicting serious injury; battery of an unborn child; and five counts of assault inflicting serious injury in the presence of a juvenile, according to a Police Department news release.

Investigators said the assault was not a random act of violence.

Brewer was held at the Cumberland County Detention Center on a $2 million secured bond, the release said.

Detectives with the Aggravated Assault Unit are investigating the incident.