Bill Kirby Jr.: From Fayetteville to the Big Apple for Isabelle Dee Wedemeyer 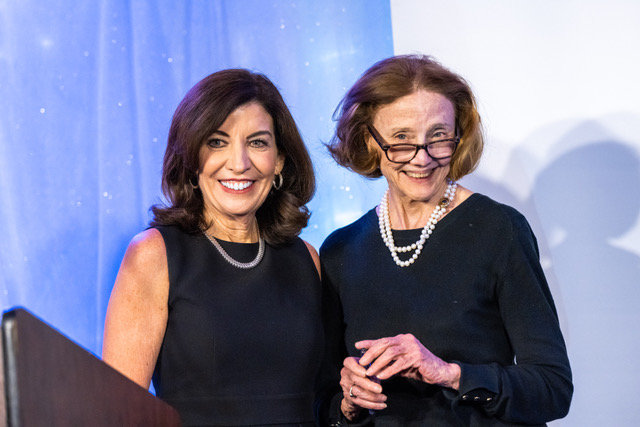 Isabelle Dee Wedemeyer came out of Fayetteville High School in 1961with no intentions of waiting for the world to come her way.

She went after her world, and did she ever.

“When I was younger, I was too young to even know what a woman she was,” Kenny Strickland says about the aunt he so admires. “It wasn’t until I was becoming an adult myself and learning about life that I realized this is a woman who left Fayetteville to go to New York and ended up making her life there in one of the most diverse places on earth.

“Me, I went two hours away to East Carolina University and remained in the safety net of my mom and dad.

“And for Aunt Dee to become an editor with The New York Times and make an entire career there to me was always a bragging point,” says Strickland, president of Highland Construction Co. “‘My aunt is an editor at the Times.’ Everyone knew what the Times was without even having to say New York in front of it. And after retirement, she decided to attend law school and went on to graduate is just amazing to me.”

So, not to get ahead of ourselves here.

Isabelle Dee Wedemeyer was one of two daughters born to Frederick Wedemeyer and Carra Belle Maultsby Wedemeyer in Pinehurst, but she spent her early childhood in Raeford.

“When I was about 4 or 5, there was a polio epidemic in Raeford,” she says.

“My mother and her sister, Estelle Blue Maultsby Powell, decided we should go to Fayetteville to stay for a while at the home of my grandmother.”

“Haymount was a playground for my sister and me,” Wedemeyer says.

There was kindergarten at Highland Presbyterian Church, and she was one of the kids at Miss Haynie’s School. She later learned at Westlawn and Belvedere elementary schools before moving on to Alexander Graham Junior High and graduating from Fayetteville High School.

“My mother built the buildings on the block where the Cape Fear Regional Theatre is now,” she says. “On Saturdays, we went to the Hamont Theater and got ice cream at the corner drugstore. After school, we skated at Highland Presbyterian Church. We bought penny candy at Bullard’s Store.”

Wedemeyer was fascinated by the trappings of youth.

“I remember Santa Claus arriving by parachute at the Eutaw Shopping Center and the Easter Bunny ‘hatching’ from an egg on the side of JCPenney,” she says. “I remember that JCPenney had an up escalator and Sears had an up and down escalator.”

She remembers her first bicycle from Sears & Roebuck.

“It was black,” Wedemeyer says. “I wanted the light blue one.”

She wasn’t one just to play with her dolls.

“I learned that boys had soapbox derbies involving motorless cars they made themselves,” Wedemeyer says. “I made my version from a hand cart, which formed the two rear wheels. A push lawnmower provided the front wheels and the steering mechanism, which was achieved by threading the mower’s handle through the bars of the hand cart. I rode it down a hill on Elvira Avenue.”

She gave up the bike to learn how to drive a car.

“I remember learning how to drive, circling the Market House on a holiday weekend more than once, to the dismay of the driving teacher, Mr. (Percy) Warren,”  she says of her high school years.

‘A journalist or a lawyer’

“I remember reading The Fayetteville Observer, the magazines my mother subscribed to, the Weekly Reader and checking out books from the school library and the public library,” she says. “I took a tour of The Fayetteville Observer and came home with a piece of (lead) type. I remember Pat Reese, who was an advisor for a number of student activities, including the Key Club.”

To this day, she can still see the huge Observer headline in 1954 about the U.S. Supreme Court’s unanimous decision that racial segregation in public schools was unconstitutional.

“I remember being a quiet and shy child, listening and watching,” Wedemeyer says. “My sister Margaret remembers me as fearless.”

She was in tune with the world around her, and Isabelle Dee Wedemeyer was intrigued.

“I remember Martha Swain and I going on a bus organized by local Democrats,” she says, “to see Jack Kennedy speak in Raleigh.’’

Swain, she says, later became the mayor of Winston-Salem.

“I remember a school bus trip to see a Rembrandt exhibit in Raleigh and reading every word on the cards on the wall and looking at the paintings because they were so important,” Wedemeyer says. “And because I might not ever see a Rembrandt again.”

And she recalls her visit to Flora MacDonald College in Red Springs for a vocational test.

“I wrote down I was interested in being a journalist or a lawyer,” says Wedemeyer, who also was editor of the high school newspaper. “The test report said I could do either.”

After high school, she enrolled at Queens College in Charlotte before heading to George Washington University in the nation’s capital, where in 1965 Wedemeyer earned a degree in American thought and civilization.

“My first job in journalism was as a copyboy at The Washington Post,” she says, and it was where Ben Bradlee was managing editor. “A reporter at the Post advised me to go to a capital city with two newspapers competing for stories.”

Wedemeyer was off to New York, where in 1966 she was a general assignment reporter for The Knickerbocker News in the state capital of Albany. In 1967, she was assigned to report on the state legislature and the New York State Constitutional Convention. She spent three weeks as a freelance writer covering the 50th anniversary of the Russian Revolution in the Soviet Union. Those stories were sold to the Associated Press, and the wire service offered her a job in the New York bureau.

She joined the Associated Press in 1968, and a year later became one of six reporters assigned to cover changing lifestyles in the United States. These assignments included living with and reporting on a family living on welfare in New York City and reporting about farm wives in North Dakota. She also was assigned to national stories such as the 1968 Republican National Convention in Miami Beach, when Richard Nixon was the presidential nominee, members of first families, the investiture of Prince Charles as Prince of Wales and Fourth of July at the American Embassy in Paris.

Wedemeyer earned a prestigious Nieman Fellowship at Harvard University in 1974-75, where she concentrated on architecture and business. In 1976 she joined The New York Times covering Long Island, metro, style and the Sunday real estate section, where she became the editor. Over the years, Wedemeyer wrote for business, culture, advance obituaries, travel and The New York Times Magazine.

Wedemeyer retired from The New York Times in 2003 and in 2008 enrolled in law school at Tulane University in Louisiana. She later transferred to Fordham University.

She made it a point to do internships in the city and state agencies that regulate property, including the attorney general’s real estate finance bureau, the city council legal department, infrastructure division and the NYC Department of Finance, Property Tax Unit.

She earned her juris doctorate in 2012.

Wedemeyer was honored by then Gov. Andrew Cuomo in 2019 as one of 28 Women of Change in New York for her legislative reporting career that included becoming the first woman admitted to the Legislative Correspondents Association when the organization began admitting women in 1967. Others honored were Rep. Shirley Chisholm, the first African-American woman elected to Congress; Marguerite “Missy” LeHand, an aide to President Franklin D. Roosevelt when he was governor of New York and later the U.S. president; and Hillary Rodham Clinton, former U.S. secretary of state, the first woman to serve as a senator from New York, the first woman nominated by a major party to run for president, and a first lady.

Wedemeyer was honored again on May 24 at the annual Legislative Correspondents Association Show in Albany, where she was selected to introduce Gov. Kathy Hochul, the first woman governor of New York.

“To me, this is a big deal,” nephew Kenny Strickland says. “My neighbors out in Vander are everyday people with most of us being in the area our entire lives. Her neighbors are from all over the world. I travel to Raleigh and my aunt travels to France. Just to move up there on her own and not just survive but to strive is so amazing. It makes me think of the Frank Sinatra lyrics ’If I can make it there I’ll make it anywhere.’ As a father of two girls, seeing women succeed like my aunt is a motivator. She is amazing.”

Wedemeyer, 77, has no intentions of slowing down.

“I’m starting a book, possibly a column, on the law of everyday life,” she says. “And building a website — DueDiligence.com — a legal guide for boards of directors. I visit Fayetteville for Christmas and for weddings, graduations” and high school reunions.

Strickland loves visits from his aunt and reminding friends how special she has been in his life.

“My aunt,” Strickland says with pride, “was an editor at the Times.”

Wedemeyer feels the same about him and his brother Gary Lee Strickland.

“My nephews stayed in Fayetteville,” she says, “and built wonderful lives and a great company.”