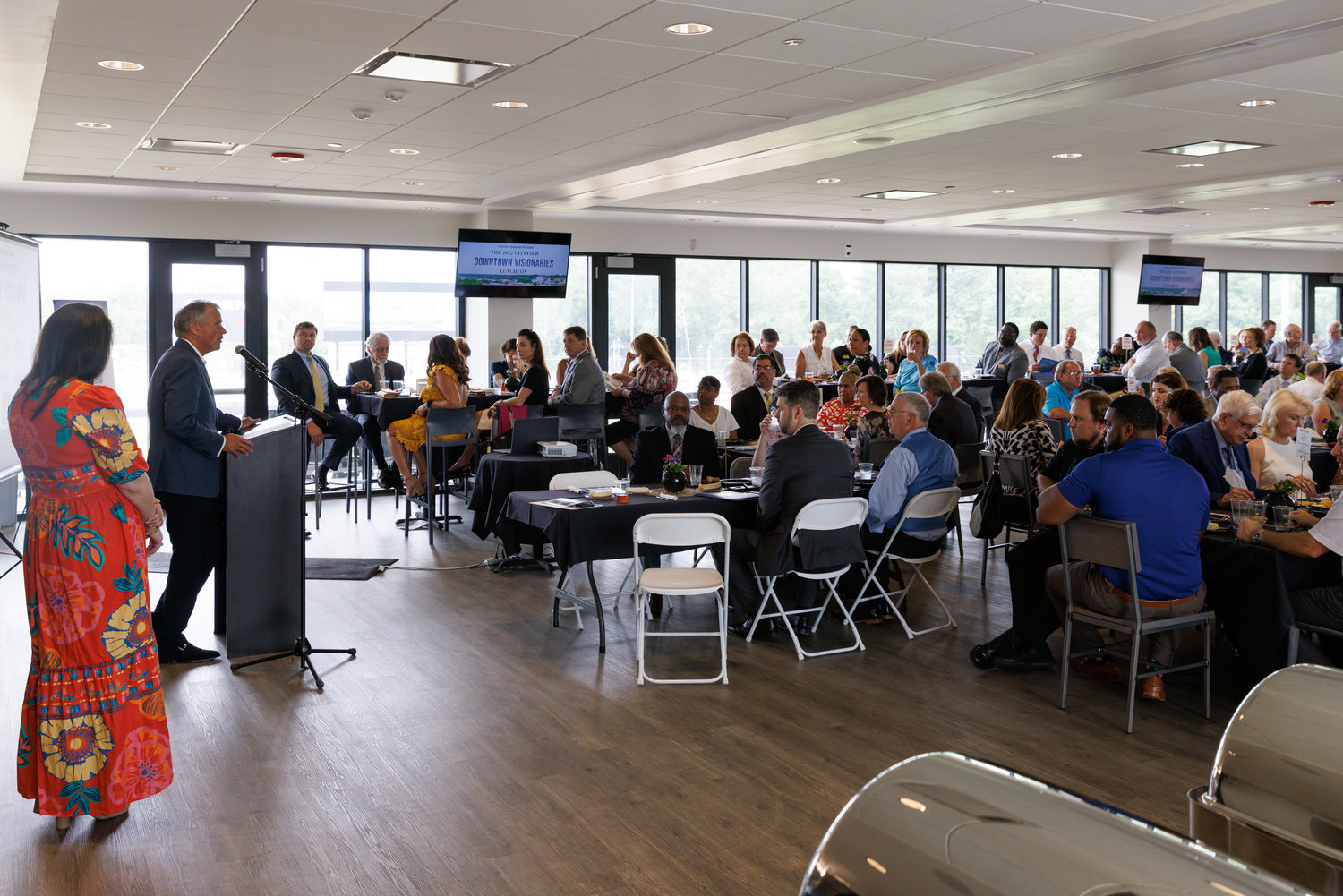 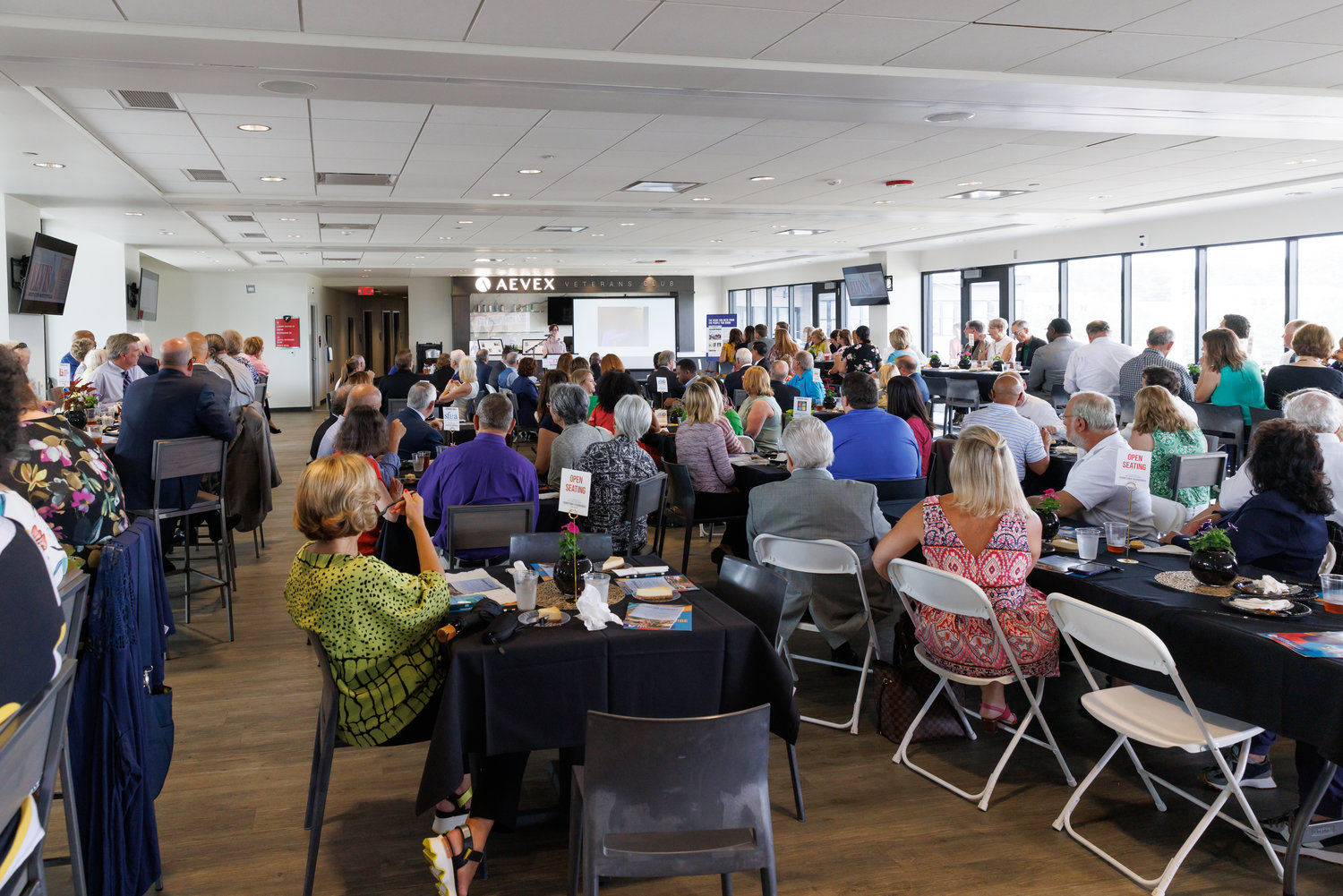 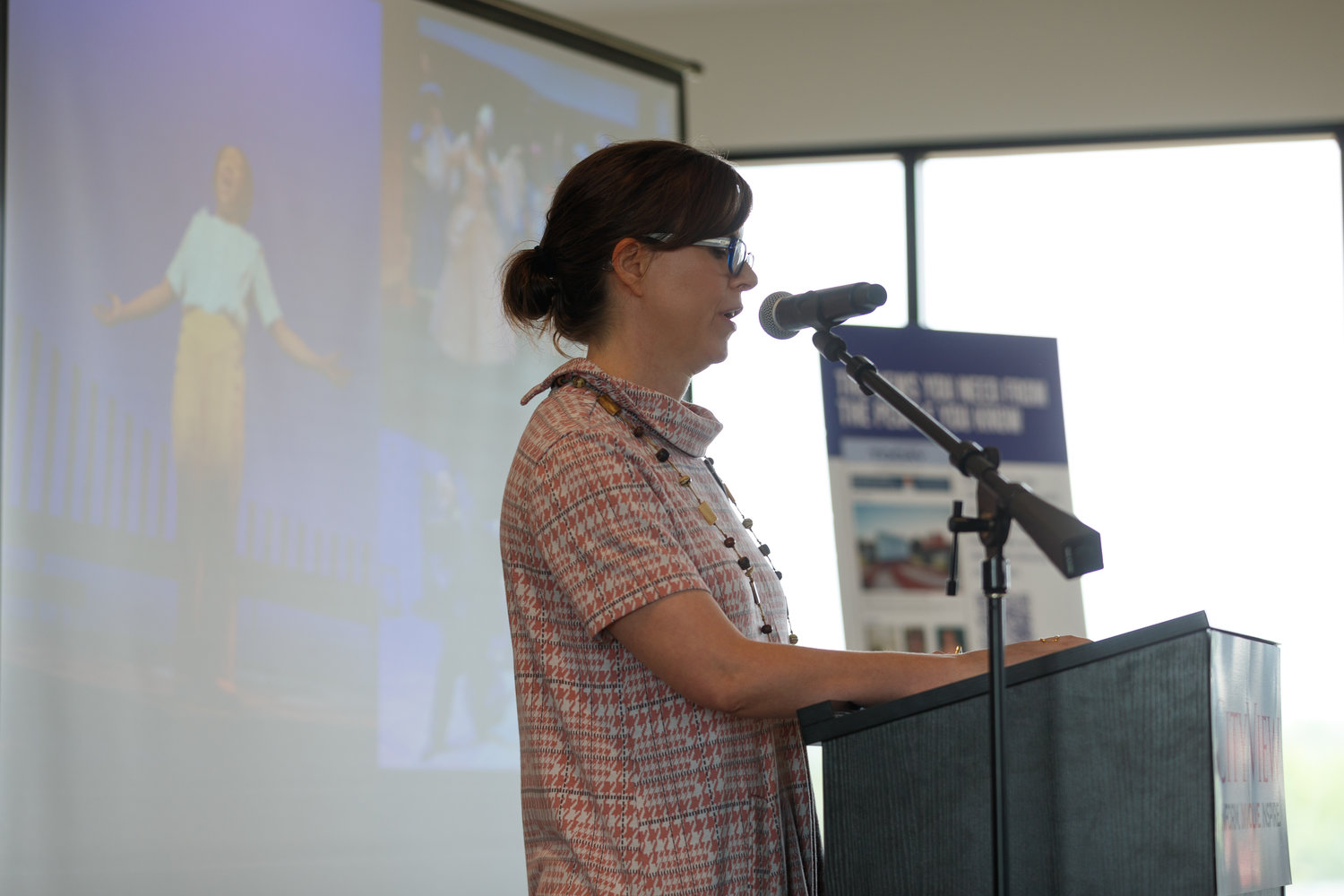 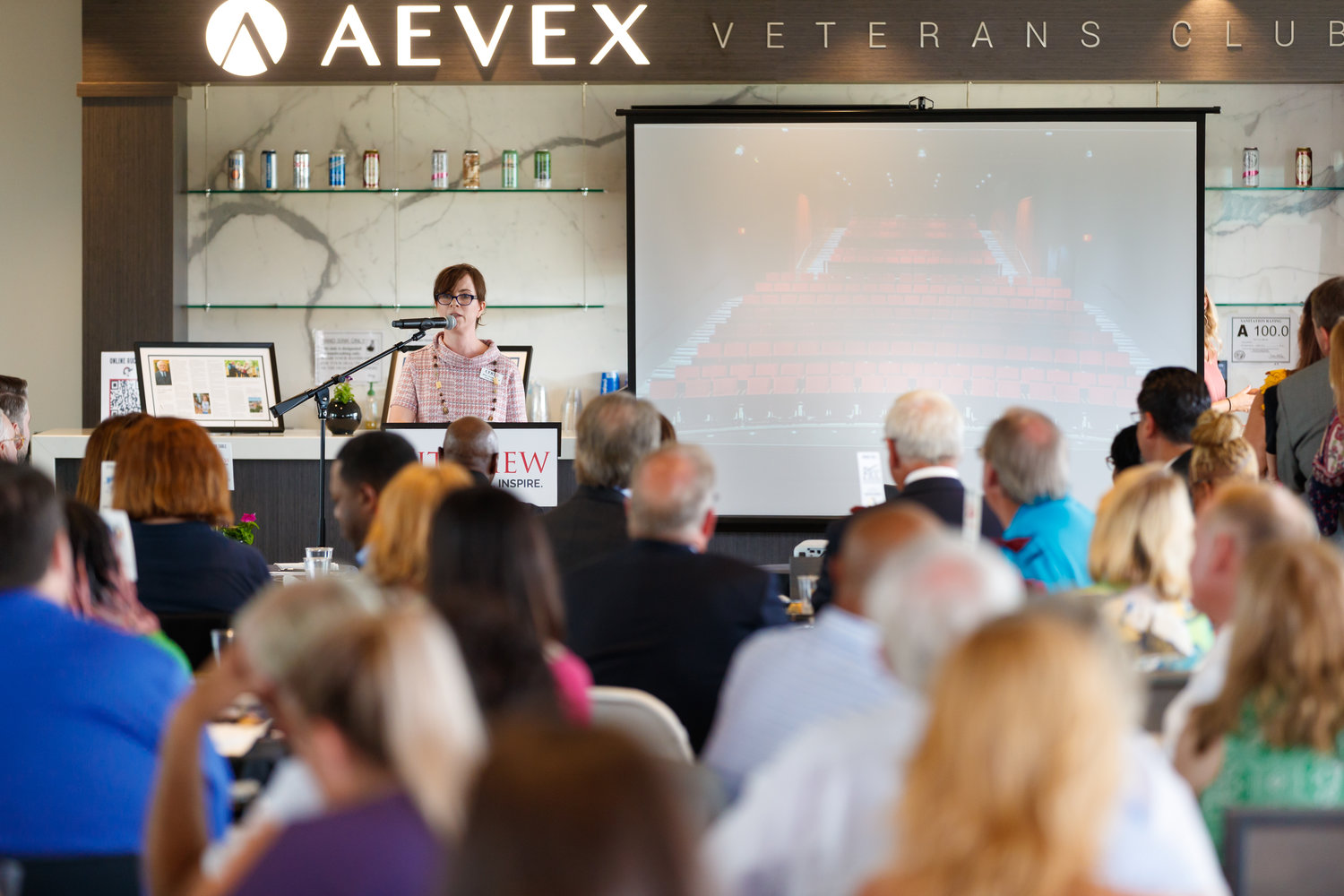 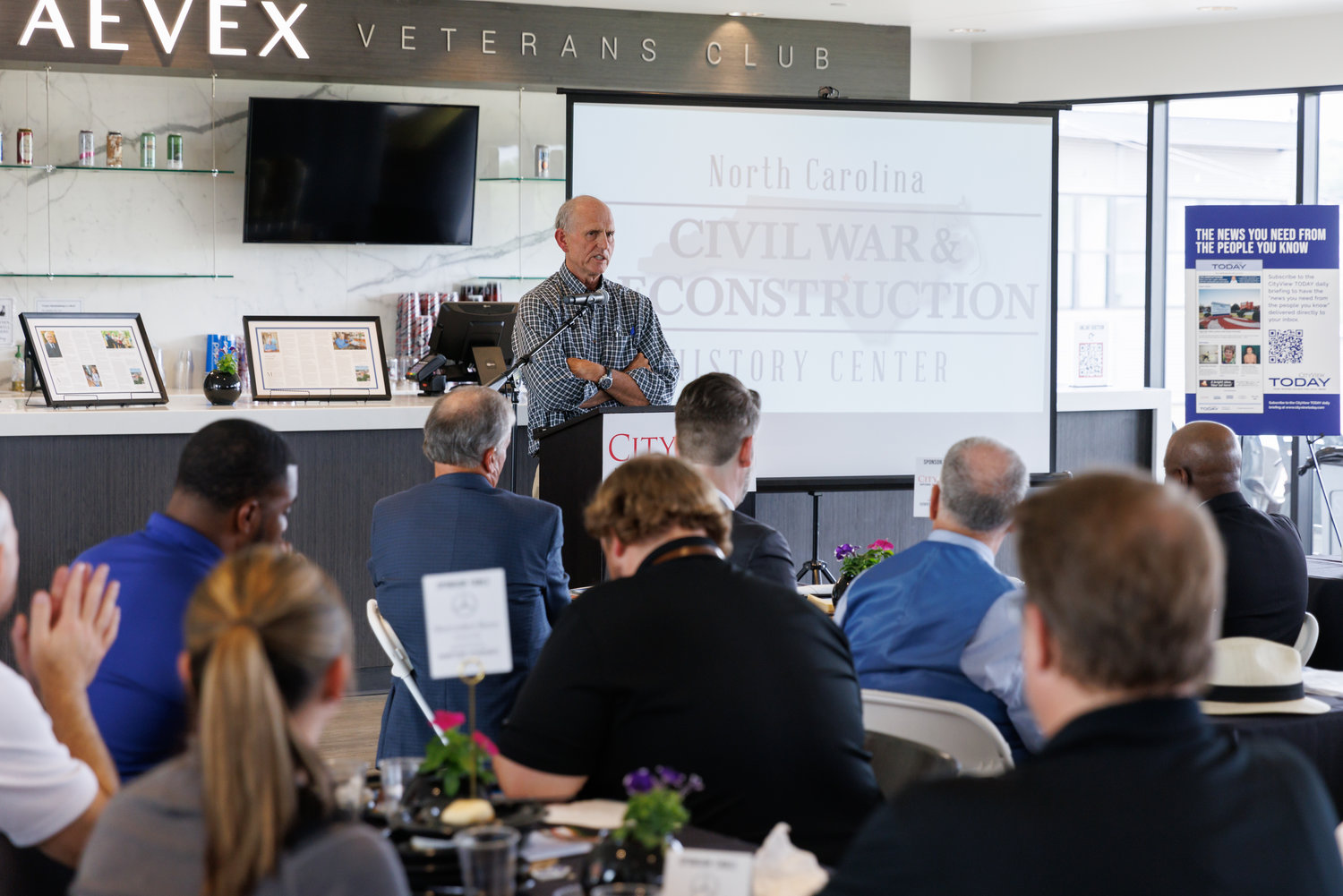 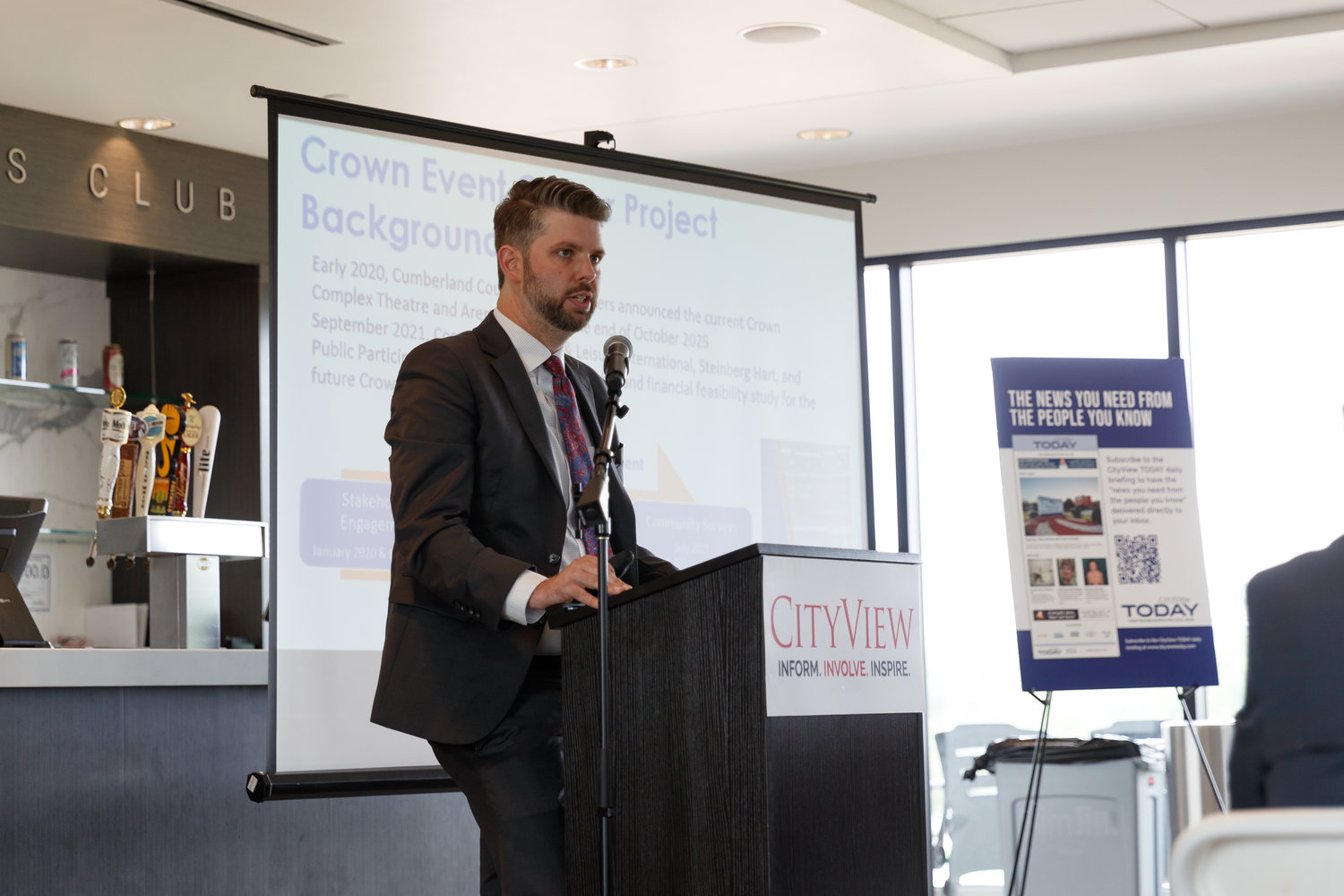 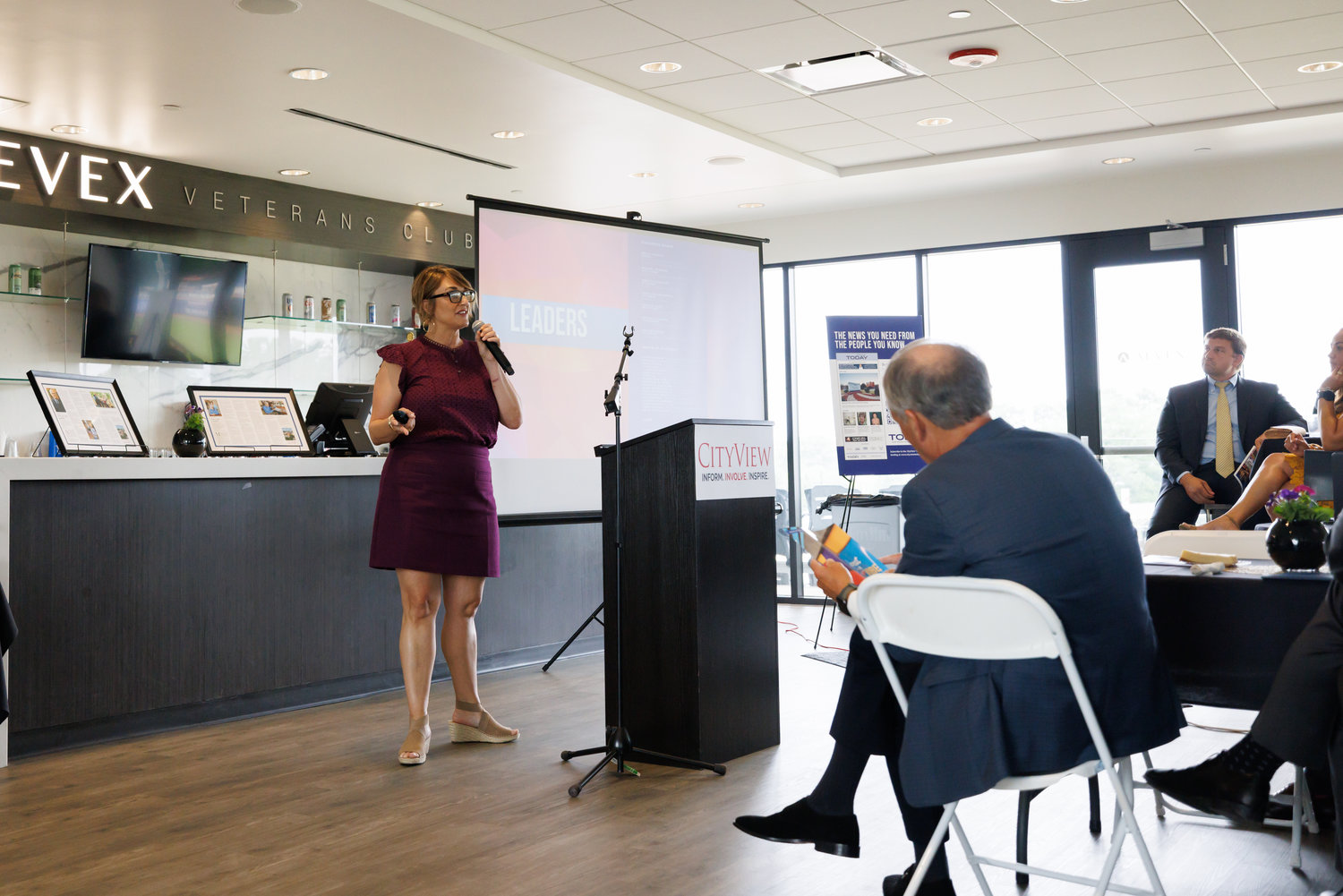 Bianca Shoneman, president and CEO of the Cool Spring Downtown District, provides an update on projects and events in the downtown area during the 2022 CityView Downtown Visionaries Luncheon Wednesday at Segra Stadium.
Tony Wooten | CityView Media 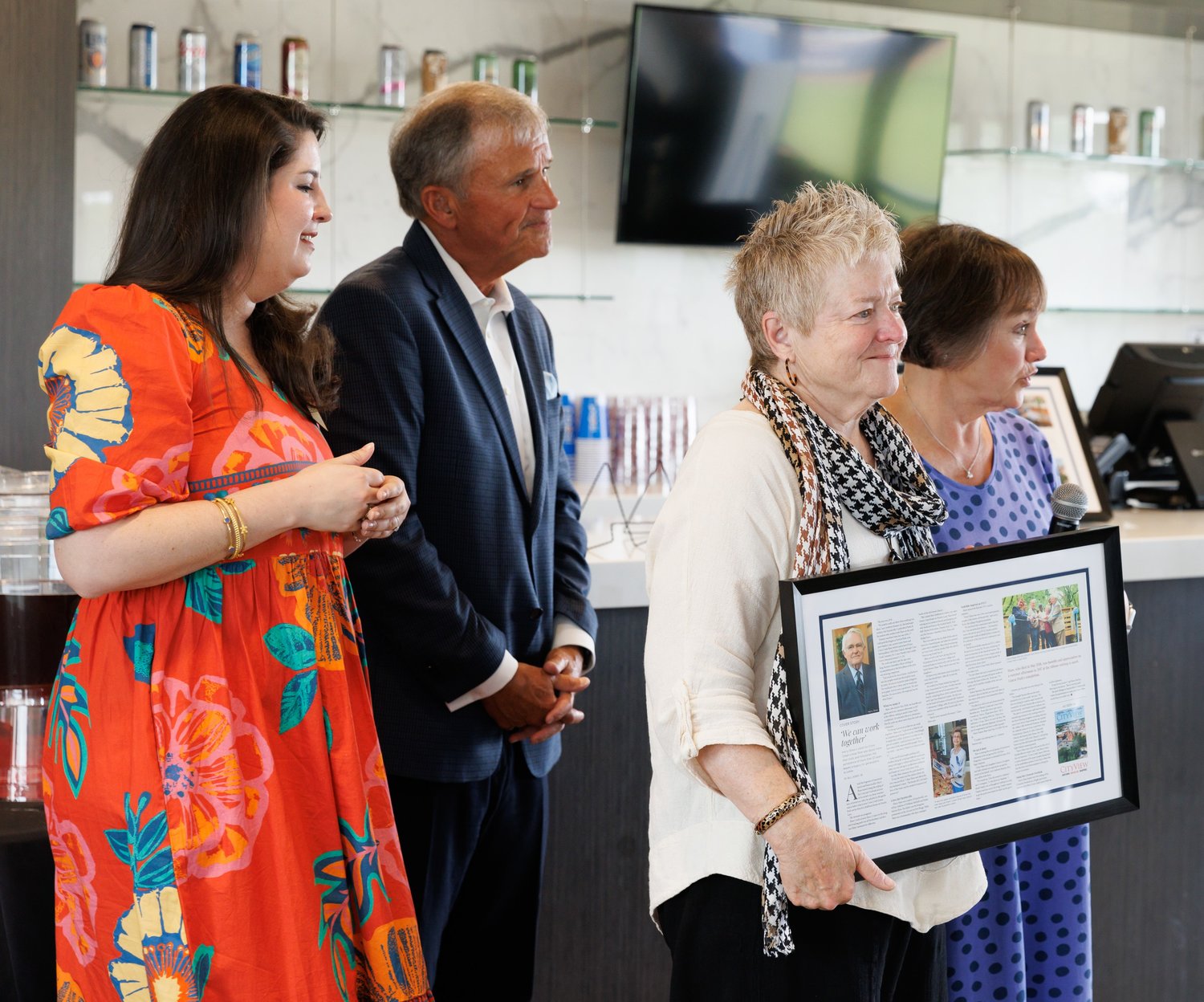 Faison Covington and Sally Schmitz accept the CityView Downtown Visionaries Award on behalf of their father, the late Harry Shaw. Shaw was a civic leader who was a driving force behind Cross Creek Linear Park. The recognition luncheon was Wednesday at Segra Stadium.
Tony Wooten | CityView Media 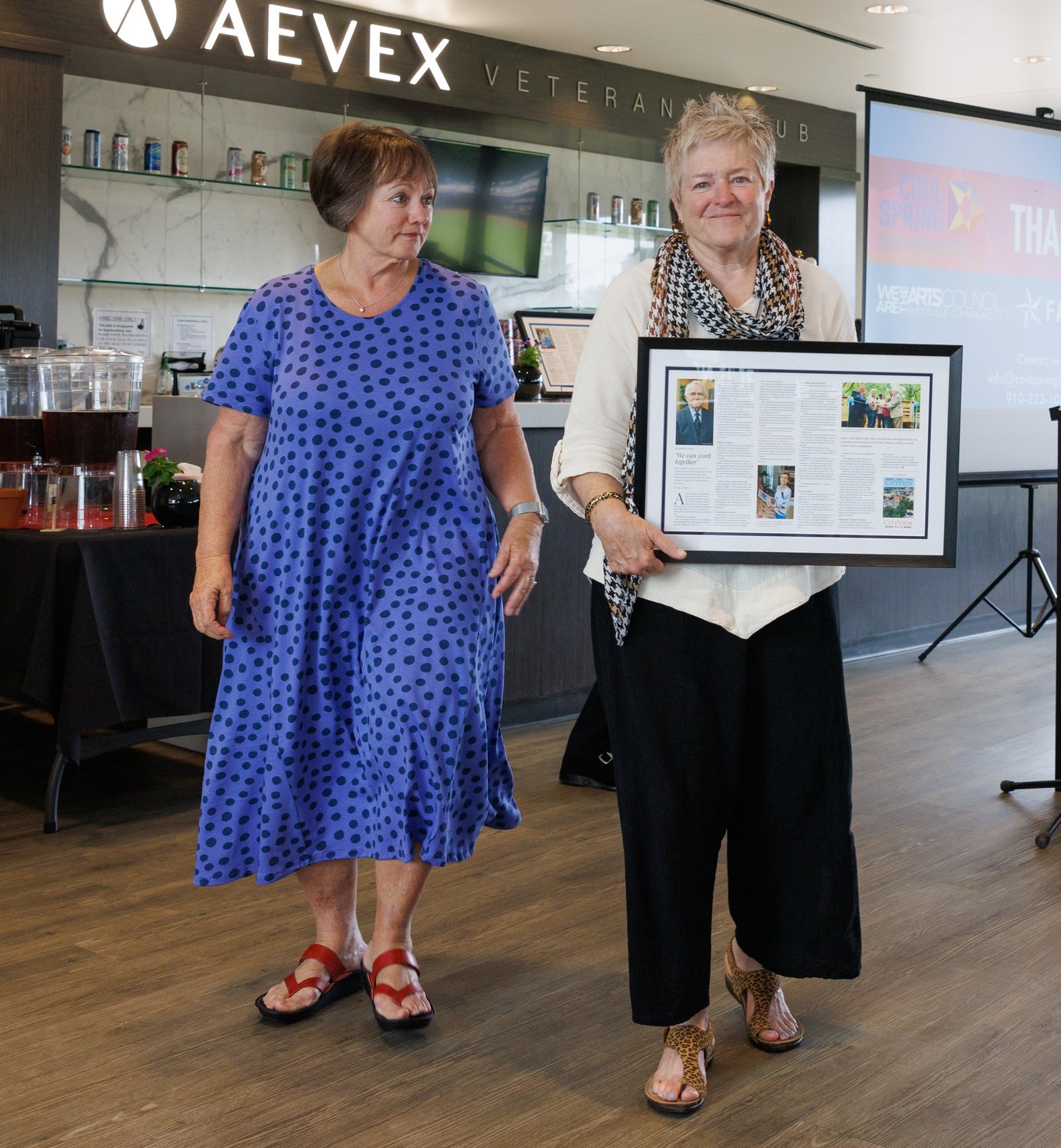 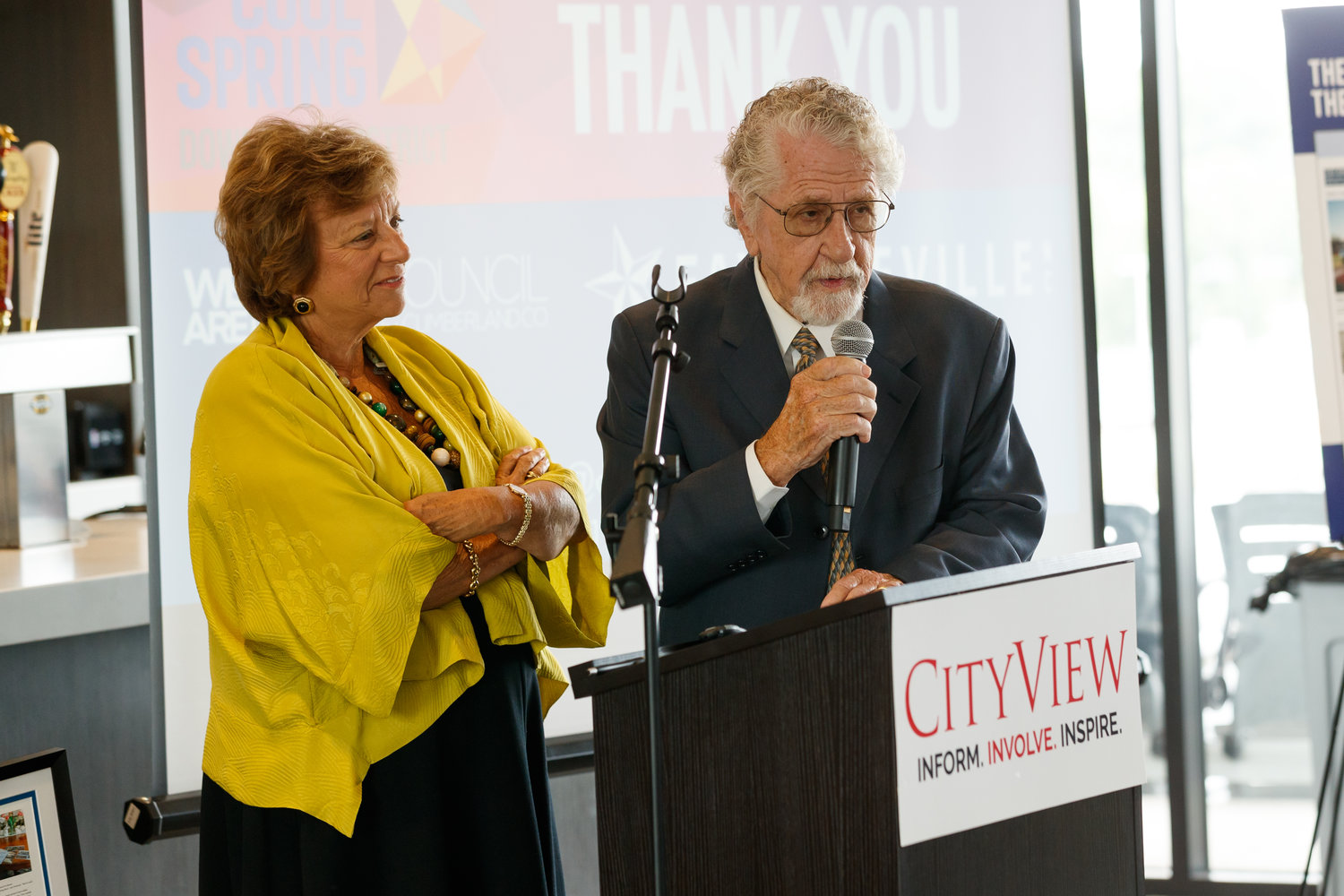 Menno Pennink addresses attendees after being recognized as one of the 2022 CityView Downtown Visionaries during a luncheon Wednesday at Segra Stadium. Pennink, a Fayetteville businessman, was a supporter of downtown long before others shared his vision.
Tony Wooten | CityView Media 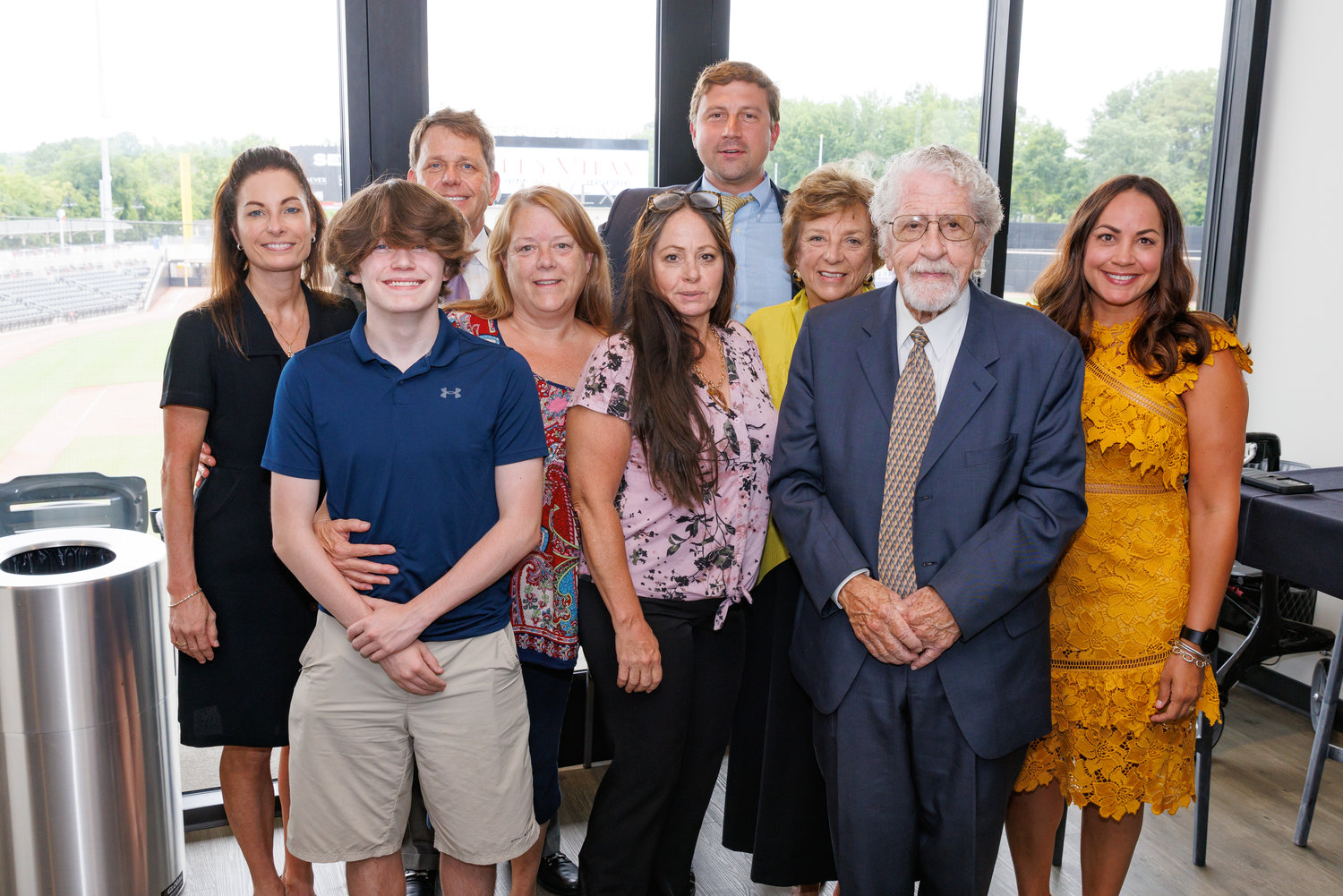 Two men who have been champions of downtown Fayetteville were honored as visionaries at a luncheon Wednesday at Segra Stadium.

Menno Pennink and the late Harry Shaw received the 2022 CityView Downtown Visionaries awards in recognition of their longtime commitment to revitalizing and improving the downtown district.

The awards are sponsored by CityView Magazine.

Pennink, a retired neurosurgeon, recruited 17 businessmen in 1992 to purchase and renovate the Prince Charles Hotel. Over the years, he has restored numerous other buildings downtown, including the Pemberton building, McKeithan lawyers building and Point News.

Perhaps his most well-known project is the $15 million residential and commercial building known as 300 Hay.

Shaw worked for more than 12 years to develop Cross Creek Linear Park not far from his childhood home on Hawley Lane.

The 2.7-mile park begins at Festival Park and runs through historic sections of downtown. Shaw, who died in May 2018, lived to see the 2017 ribbon-cutting to mark Linear Park’s completion.

Pennink and his wife, Suzanne, accepted his award. Shaw’s daughters, Faison Covington and Sally Schmitz, accepted the award on his behalf.

"It is always exciting to celebrate our downtown and the economic opportunities around the  corner, but even more rewarding when we take a moment to recognize the visionary leaders that helped make it happen," said Tony Chavonne, publisher of CityView Magazine.

As part of Wednesday’s luncheon, a video tribute to Pennink and Shaw, narrated by city historian Bruce Daws, was played.

The ceremony also featured representatives of several downtown and Haymount projects that are now underway.

Mary Kate Burke, artistic director of Cape Fear Regional Theatre, described plans for a $16 million renovation and expansion of the building. The theater opened in 1962.

Mac Healy, co-chair of the N.C. Civil War and Reconstruction History Center Foundation, discussed progress on the $80 million building that will be off Arsenal Avenue and become part of the state-supported Museum of the Cape Fear Historical Complex.

Assistant Cumberland County Manager Brian Haney spoke about plans for a new special-events center, including efforts to solicit public input about where it should be located.