Cardiac care providers and patients agree: Listen to your body 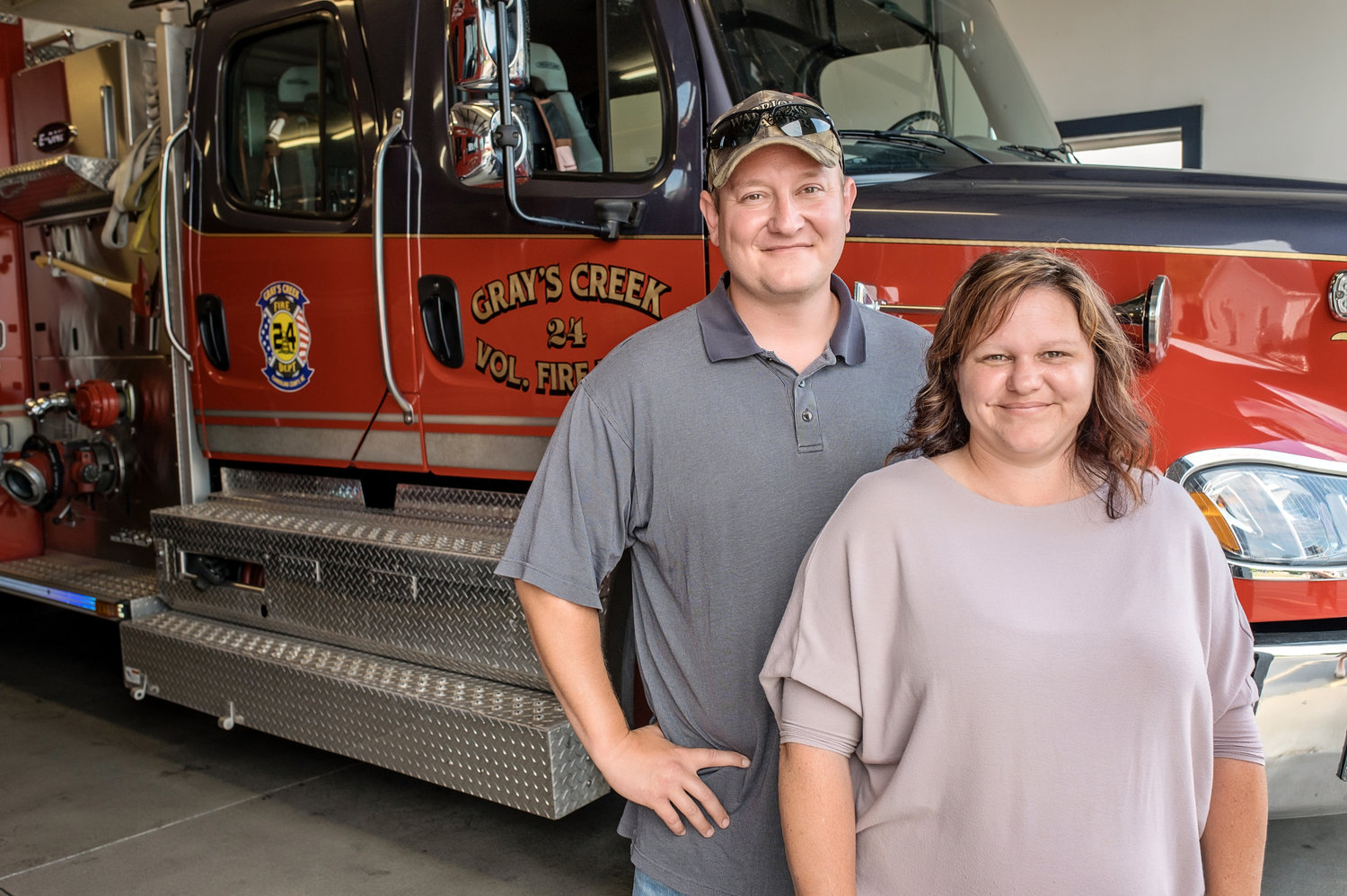 Michelle Boyd and her husband, Michael, recently visited Gray’s Creek Fire Department to thank some of the first responders who answered her 911 call when she suffered a heart attack in August 2021. Photo by Ginny Capiot/Cape Fear Valley Health System
Posted Monday, July 25, 2022 12:04 am
By Bobby Parker

Michelle Boyd’s mother knew what to do, even if her daughter wasn’t sure.
Mom called 911.
Boyd was in pain and on the brink of a heart attack.
“I was lying down and I started getting chest pain,” says Boyd, 37. “I had pain in my jaw that went down my arm. And I kind of blew it off and thought it was heartburn or panic or stress, anything besides a heart attack. ...”
“I could not believe it was happening to me. I felt I was too young and too healthy.”
Boyd does not remember much about that Aug. 23 ride to Cape Fear Valley Medical Center.
“From what I have been told, it was very touch-and-go the whole time,” she says.
Boyd, the office manager for a real estate company, regained consciousness the next day.
“I remember how bad my chest hurt from the CPR,” she says. “I was told that was because they did it right.”
Boyd says she does not recall any warning signs of heart trouble that kept her in the hospital for six days. But that may be because of her busy lifestyle. She works full time and is the mother of three children under the age of 6.
Her youngest child was born June 7, 2021, and a week later, she was diagnosed with COVID-19. Doctors told her that those two factors could have contributed to a loss of fluids and a risk of blood clots that would have made her body susceptible to a heart attack.
Carlon Carson, invasive services manager at Cape Fear Valley Health, says his team stands ready to respond the second patients arrive at his facility.
When emergency crews radio in that they’ve got a heart attack patient on the way, Carson’s staff of nurses and technicians gets moving.
His mantra is, “Time is muscle,” meaning that the longer a heart attack victim is not treated, the greater the risk of serious heart damage.
“Every second that goes by that the heart is not getting blood is critical,” Carson says. “It has to have ‘gas’ all the time. ‘Gas’ is oxygen.”
Carson says the standard “door to balloon” goal is 90 minutes. That means that it will be less than 90 minutes from the time a patient enters the door and when a clogged artery is reopened with a balloon stent mechanism attached to a wire.
Carson says Cape Fear Valley’s goal is to lower that 90-minute threshold to an hour. Regular audits by health system administrators “dig deep” to ensure that such goals are met, he says.
Carson has been in health care for 30 years, 13 of them at Cape Fear Valley. He began his career as an X-ray technician and one day noticed a sign for a catheterization lab, where diagnostic imaging is done.
“What is a cath lab?” he asked a supervisor, who suggested he research the field. After additional training, he joined the cath lab staff and has never looked back.
Symptoms of a heart attack include arm or chest pain, a rapid heart rate, and a cold or clammy feeling, Carson says.
“If you feel any kind of symptoms, you’ve got to act on it,” he says.
Genetics is the most common risk factor, Carson says. If either of your parents or grandparents have had heart trouble, you are more likely to have it yourself.
Other risk factors are weight, lack of exercise, smoking, an unhealthy diet, high blood pressure and diabetes, he adds.
Michelle Boyd says her heart attack was a wake-up call. She has altered her eating habits, relying less on fast food and making healthier choices.
She says she is more active physically.
She underwent three months of physical rehabilitation with sessions three days a week.
This June, Boyd was able to meet the care team that saved her life — from Carson’s invasive services team at Cape Fear Valley Heart & Vascular Center to the firefighters who were the first to respond to her call.
“It was really emotional,” she says. “It really brings home how sensitive life is and how quickly it all can change.”
Boyd says the care she received at Cape Fear Valley Health System was “above and beyond” what she would have expected.
And for anyone who experiences chest pain or other symptoms of a heart ailment, Boyd has some clear-cut advice.
“Listen to your body,” she says. “Don’t doubt it.”
The baby daughter who Boyd gave birth to just weeks before her cardiac arrest celebrated her first birthday in June.
“It just means so much to be able to celebrate with her,” Boyd says, “and to coach my little boy’s baseball team with my husband. I would not be able to experience any of this without Cape Fear Valley.”