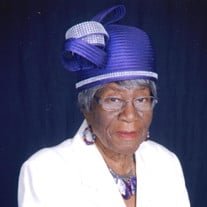 Posted Saturday, November 26, 2022 2:53 pm
Colvin Funeral Homes & Cremations (via HM Colvin)
This is the Life of Mrs. Lillie Hadley Stewart Stackhouse. Her adopted parents were Robbie and Charlie Stewart. She was married to Haywood Stackhouse (who preceded her in death), and out of this union were born seven children; Julius H. (Christine), Hubert (deceased), Shirley S. Parker (Walter), Jimmie S. Wright, Steven (deceased), Sean Eugene, and Lillie Proctor (William). Also surviving are 9 grandchildren, 21 great grandchildren, 3 God children: Cary L. Thornton Jr., Richmond, Texas; Sandra Harris, Virginia, and Dr. Barbara C. Feemster, Fayetteville, NC. 1 adopted brother, Dec. James Lyle., and a host of other relatives and friends., of all whom she loved.
Mrs. Stackhouse was a lifelong member of the Second Missionary Baptist Church where she served for over 75 years. Her dedication, commitment and service to Second Missionary Baptist Church included being a member of the senior choir for over 65 years; former Vice President of the Young Adult Department; former Vice President of the Senior Mission Department, where she traveled across North Carolina in that mission capacity. She was past chairperson of the Finance Department for the sick and shut in of the Women's Auxiliary for the Middle District Association. She also served as past chairperson of the Women's Auxiliary Union where she was also a field worker.
Lillie's other civic involvement was with Miriam Tent #731, where she served as past Senior Matron of Honor. In all of her getting and serving mankind, she never wavered in her faith and her ability to rear her children up in the nurture and admonition of the Lord. She was genuine and was led by the spirit in her daily walk with God. Her upbringing was filled with love. Love in one's heart is not put there to stay. Love isn't love till you give it away. She gave of herself, her talents and her service to God and to mankind. She's done so good; she's done some wrong. Now she must go where she belongs. The Lord has willed it so. As she would gently say as she would answer the telephone ""Alright". She is alright because she has gone to get her reward. "Well done thou good and faithful servant." You will truly be missed, and we will not forget you.

To send flowers or a memorial gift to the family of Mrs. Lillie S Stackhouse please visit our Sympathy Store.