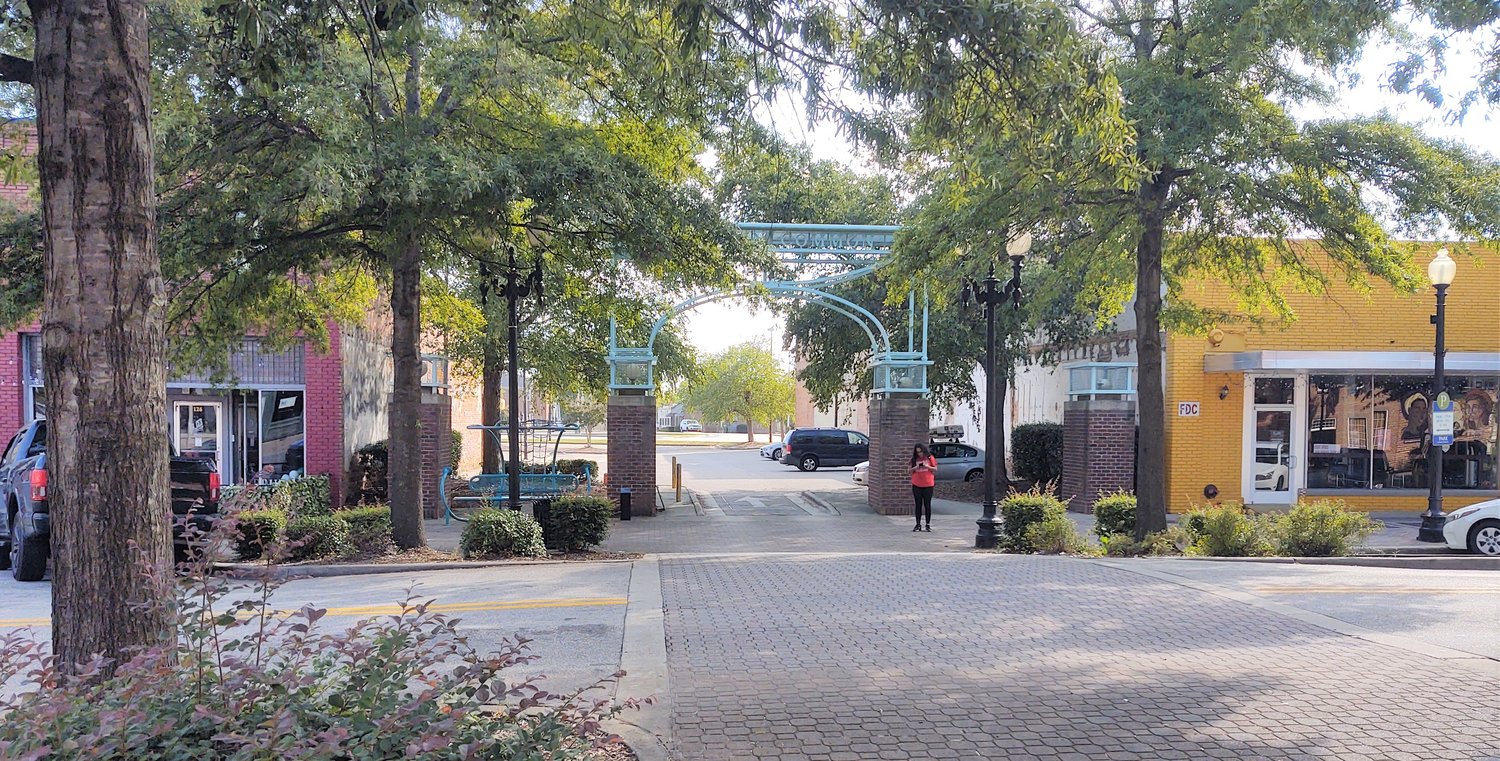 This parking lot at 122 Person St. in downtown Fayetteville is the proposed site for the Black Voices Museum, a project that has received a pledge of funding from the City Council and Cumberland County commissioners.
Photo by Bobby Parker
Posted Wednesday, September 21, 2022 12:24 pm
By Michael Futch | Staff writer

With commitments of $450,000 each from the city and the county, a spokesman for a planned museum chronicling local Black culture says he’s ready to start shaping the specifics of the project.

Bill Cassell, the project coordinator for the proposed Black Voices Museum, said he has partnered with Fayetteville native Joel Fleishman to plan for the museum.

Fleishman is a professor of law and public policy and director of the Heyman Center on Ethics, Public Policy and the Professions at Duke University. He owns the property at 122 Person St., where Cassell said the museum would be built.

Both the Fayetteville City Council and Cumberland County Board of Commissioners have pledged $450,000 toward the cost of planning for the museum.

The project also has the support of the Fayetteville Cumberland Economic Development Corp.

At this point, Cassell said Thursday, the museum remains largely a conversation.

Exactly what the museum would entail and how it would serve the Fayetteville community are still in the early planning stage, said Cassell, 67.

But he said he understands that since the project has now received public funding, local residents want to hear more details about the Black Voices Museum.

“It’s a great project, and I’m glad to talk about it. It’s exciting,” Cassell said. “It’s a project that has been approved within the guardrails of agreements for planning and for feasibility. So much I have to offer at this point is speculative.”

Cassell said it's too early to set a deadline for completion.

"But I'm aggressive in pushing deadlines," he added.

Cassell is CEO of The Learning Together Co., but he said his Greensboro-based educational company has nothing to do with plans for the Black Voices Museum. Learning Together provides peer-based academic intervention programs to help students in elementary through middle school, according to Cassell's online sources.

Struggling students are given direct instructions to teach younger students, Cassell said. A fairly new program, he added, is designed to help school districts strengthen their teachers in the midst of a teacher shortage.

According to Cassell, he has worked with Cumberland County Schools in the past, but his company is more involved with school systems in California and Texas.

Cassell said he has developed real estate, including historical rehabilitations.

His involvement with the museum, he said, has more to do with the owner of the property at 122 Person St.

Cassell said he and Fleishman are partners on the museum, with Cassell serving as the spokesman.

"It was on behalf of the landowners — that’s my personal role,” he said. “This is truly a public-private venture.”

Cassell says Fleishman would not be available for an interview at this early stage of the project.

He says his conversations with Fleishman on the project date back to 2016.

“I think the idea was predicated on what is the best use of that property,” said Cassell. “From there, the inspiration rose, which was the Market House was an irreconcilable issue at that point in time when we started thinking about what to do with that parking lot. We talked about how whatever we put there should connect to the Market House. It was a significant idea that was not as audacious as we ended up with. It was around Charles Chesnutt."

Chesnutt, who lived in Fayetteville for a time, is regarded as the first Black author to receive widespread acclaim in the United States.

“It started out as an exploration about real estate and turned into an idea on how to support Fayetteville and the community,” Chesnutt said of the museum. “It’s history. It’s Black history. It’s a relationship with race."

The Market House is near the Person Street property, which is more than an acre. Cassell said he is aware that the Market House, where slaves were sold in the 1800s, has been a contentious issue for many Fayetteville residents.

That, he said, made it important to begin discussions with the Fayetteville City Council, Cumberland County Board of Commissioners and others about issues of race reconciliation.

“This is what the city needs to go through,” Cassell said. “Before any project begins, it needs a conversation. How can Fayetteville become a leader in this effort to reconcile with race? The owners of that property came up with this idea. What can we do to support that dialogue?

“Then we were able to secure a commitment from one of the leading architects in the world to help support the planning process,” he said. “It will be reflective of Fayetteville and its history and its stories to help frame and shape where this building goes and what it will do.”

Some say the proposed museum should be viewed in context with another history project in the works, the planned N.C. Civil War & Reconstruction History Center.

Organizers of that project have received commitments from the city and the county to contribute $7.5 million each to the Civil War history center. The state would provide $60 million and operate it as a state facility.

This week, the county commissioners reaffirmed their pledge to support the Civil War history center. But the City Council was deadlocked on whether to put the issue on its Sept. 12 agenda, and no vote to reaffirm the pledge was taken.

“That's one of the reasons I support it," he said Tuesday. “That's why I was having a problem supporting the Civil War museum. I’ll tell you what, I’m not crazy about a Black museum being built near the Market House. I mean, why? I just don't understand. The Market House, to me, is just another building I go by when I'm on Hay Street. I think that (the Black Voices Museum) would bring somewhat of a balance here.

“The support is because it's needed," Evans added, "and we need balance. It just can't be one way. We use everybody's taxpayer money to do what we need to do."

Planners say the museum would tell the story of how Black culture has shaped Fayetteville and Cumberland County — from the founders of Fayetteville State University to the present-day social justice movement.

Architect David Adjaye has been selected to design the museum. Adjaye is perhaps best known for designing the National Museum of African American History and Culture in Washington.

Cassell said planners are in the process of writing a job description for the museum director that involves community engagement, organizational development and financial development with private philanthropies and foundations that support projects linked to race.

The planning, he said, is all about what stories the community wants the museum to tell.

None of that, he said, has really started yet.

“The Black history of Fayetteville is the goal of the museum,” Cassell said. “When the community engagement occurs ... it will be to talk to the community about what it wants. But the other is to discover the history. There should be tremendous transparency.

"We also want to get the oral histories of the Black citizens of Fayetteville and incorporate that into the museum," he said. "We believe that, ultimately, this should be an audacious project."

"What will make it an attraction?" he asked. "I know there will be an exploration into a number of different types of programs that will bring people year-round, whether they are educational for youths, teacher development, Black theater, authors’ programs and special collections libraries," he said.

“These are ideas that have not landed yet, but there are a lot of exciting ideas. What is the order that the community has in mind? We can only do that through engagement and the political leadership."

Fayetteville man gets 71/2 years in prison on drug, weapons charges