School back in session for traditional students 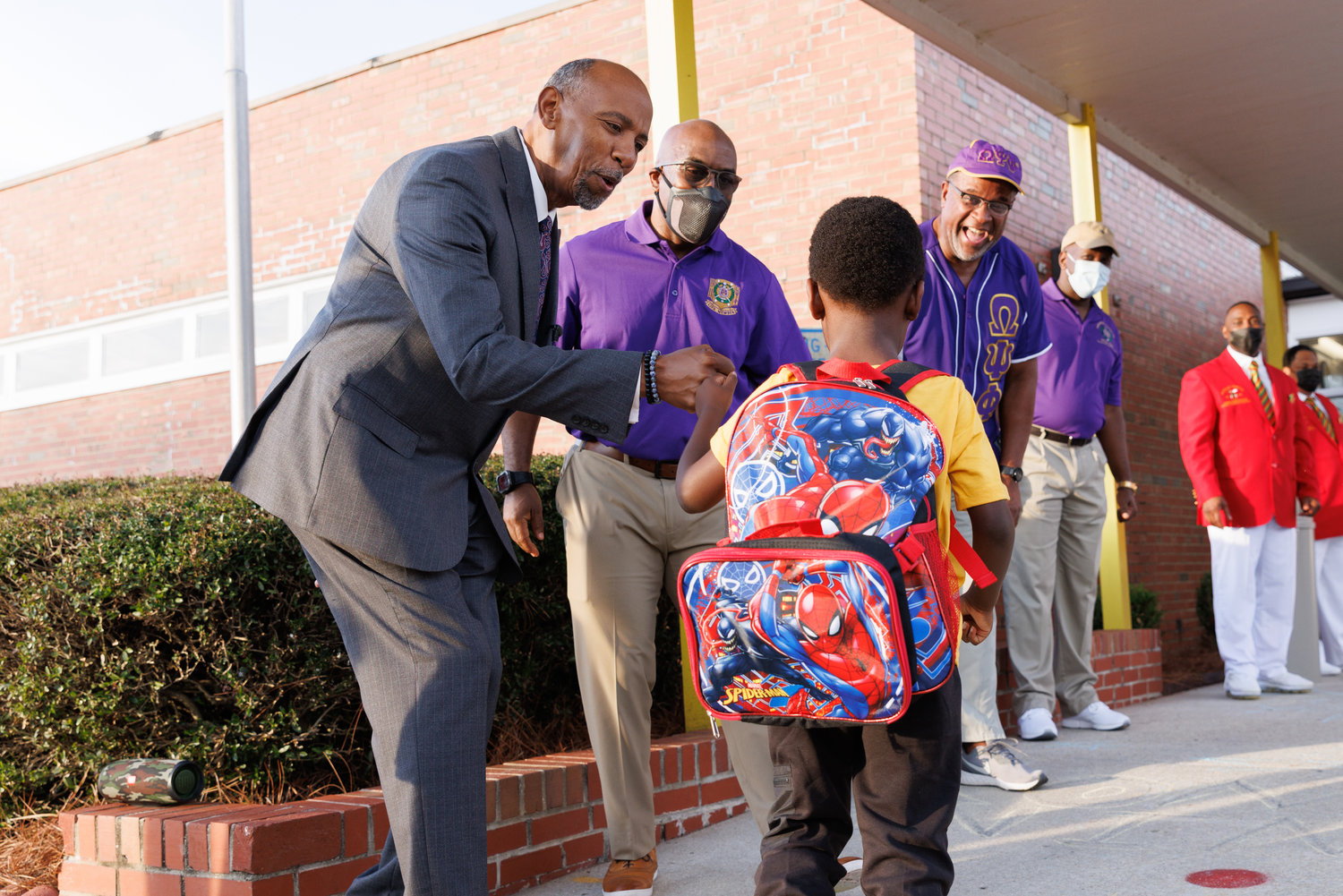 Dr. Marvin Connelly Jr., superintendent of Cumberland County Schools, and members of the Kindah Temple No. 62 and members of the Omega Psi Phi Fraternity greet students as they arrive for the first day of school at Ferguson-Easley Elementary School on Monday.
Tony Wooten | CityView Media 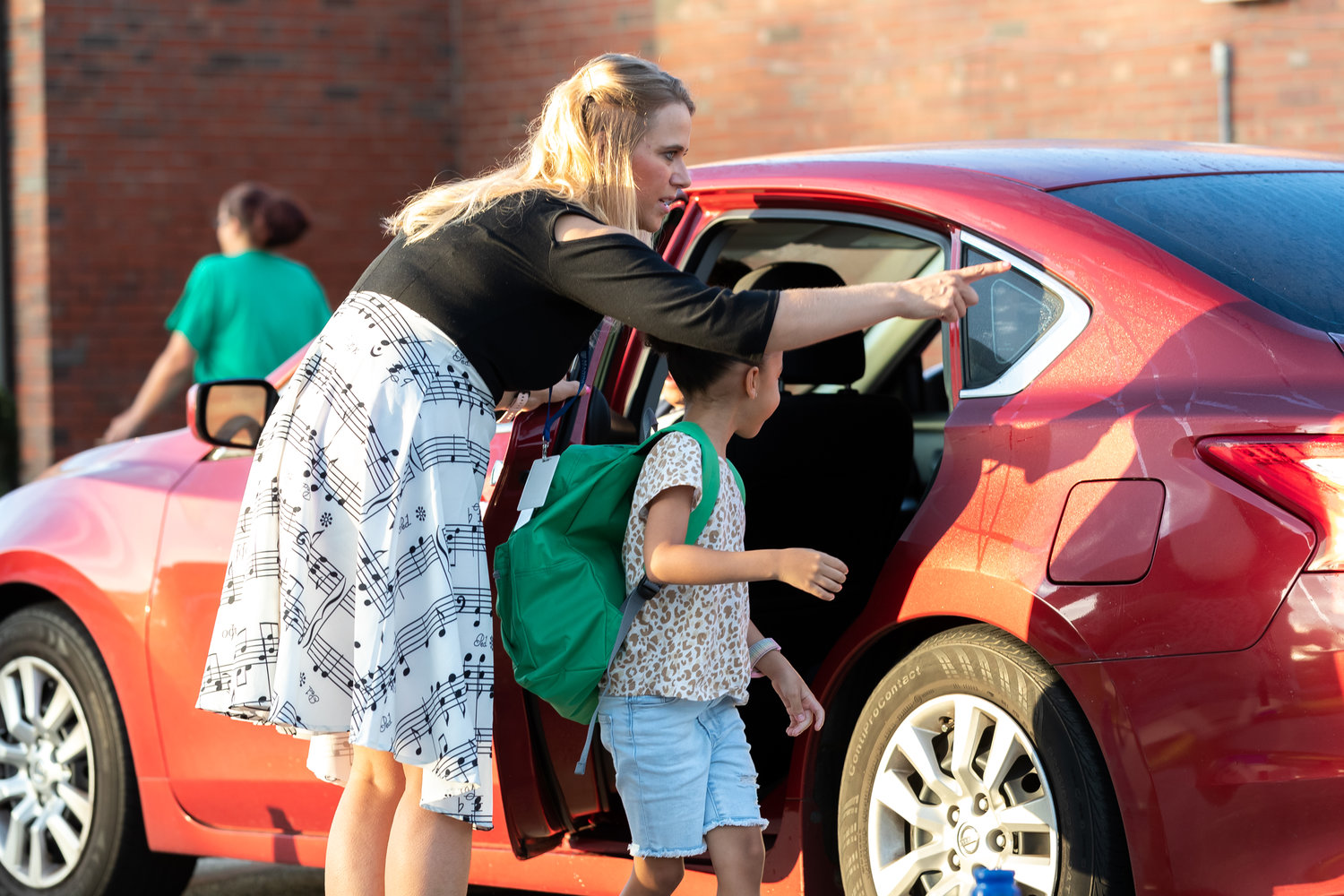 The staff and faculty of Ferguson-Easley Elementary School welcome students on Monday, the first day of class for students on the traditional calendar in Cumberland County Schools.
Tony Wooten | CityView Media 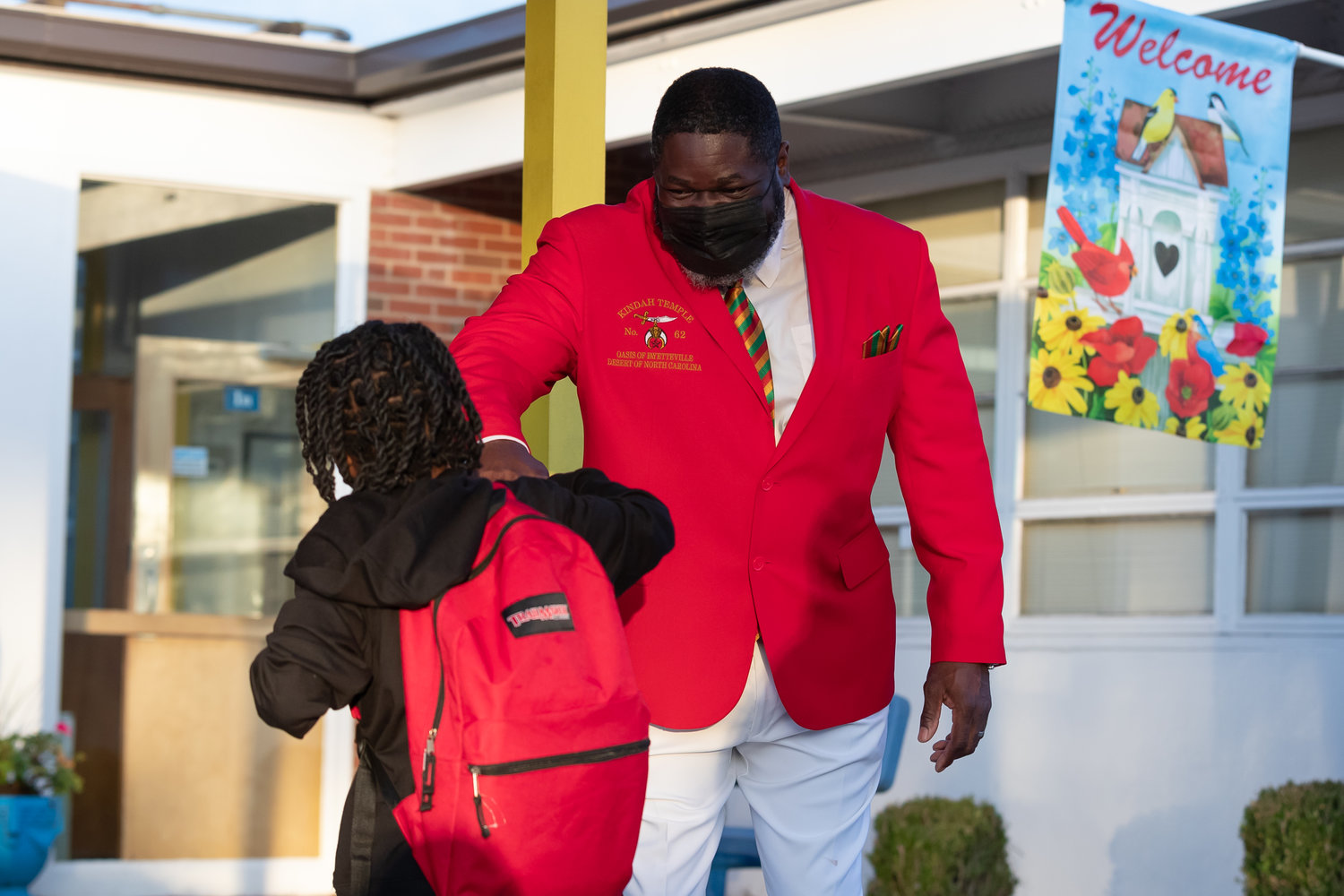 Members of the Kindah Temple No. 62 greet students as they arrive for the first day of school at Ferguson-Easley Elementary School on Monday.
Tony Wooten | CityView Media 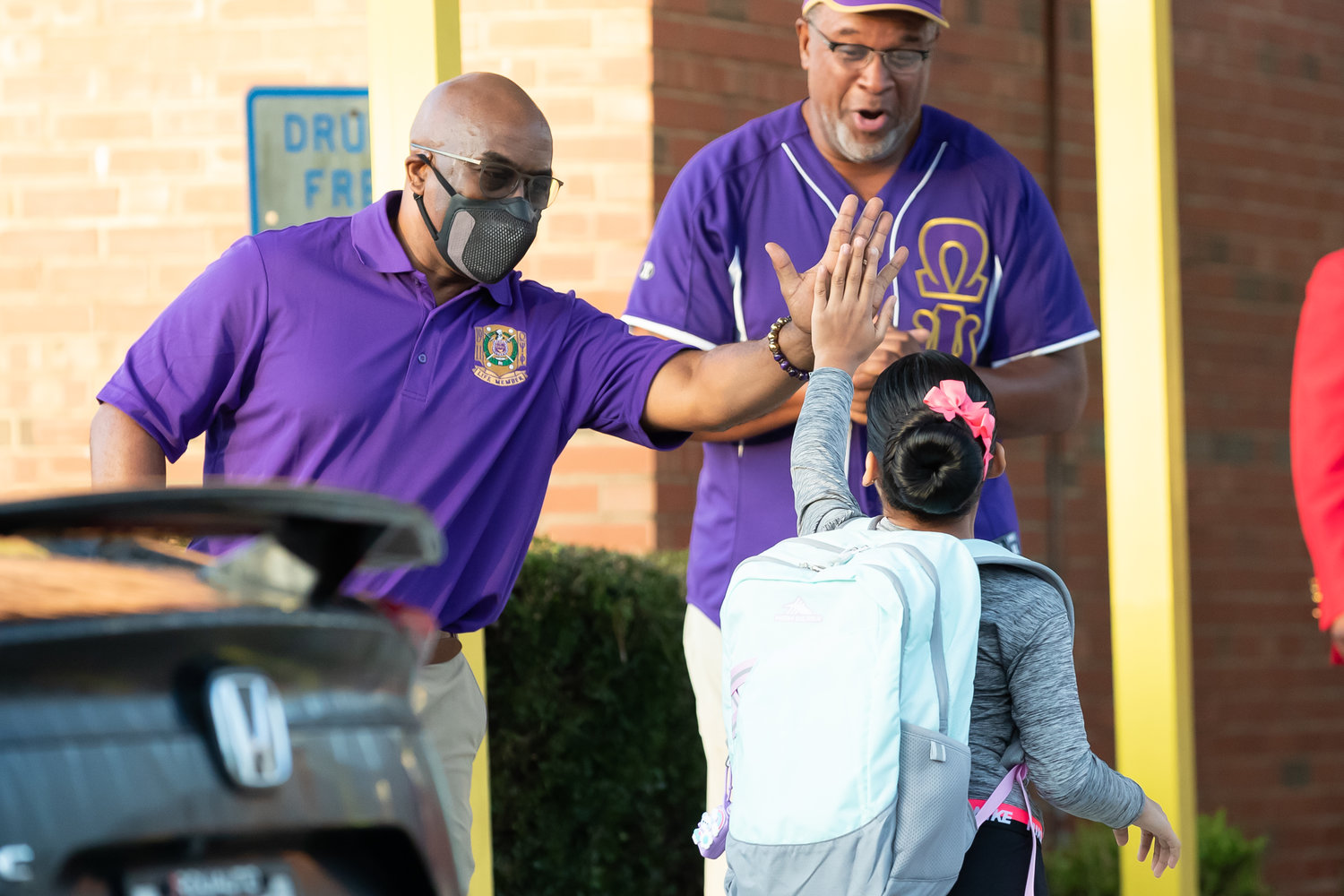 Members of the Omega Psi Phi Fraternity greet students as they arrive for the first day of school at Ferguson-Easley Elementary School on Monday.
Tony Wooten | CityView Media 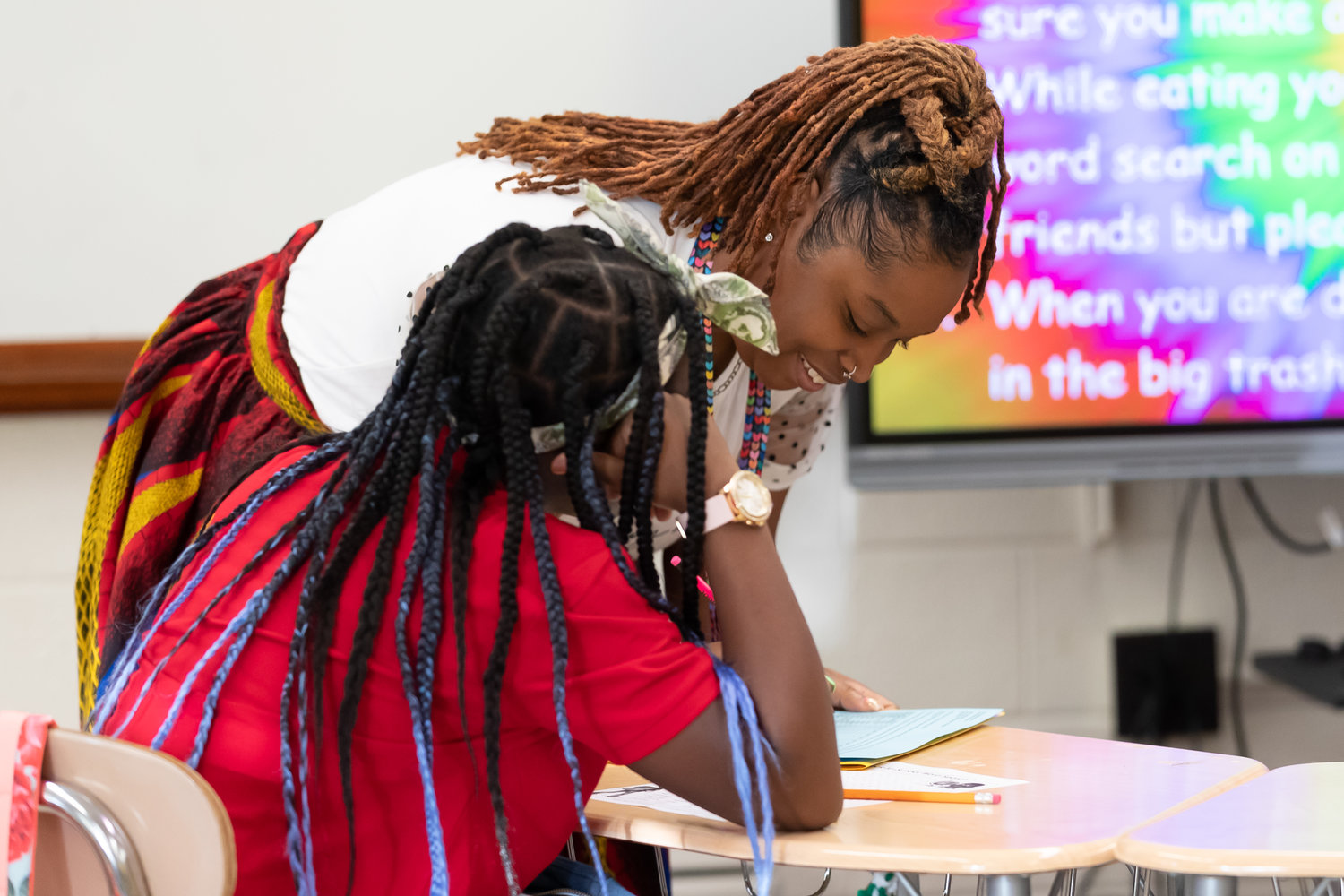 Briana Smith, a fifth-grade math teacher, talks with a student Monday at Ferguson-Easley Elementary School. Monday was the first day of school for students on the traditional calendar in the Cumberland County Schools district.
Tony Wooten | CityView Media 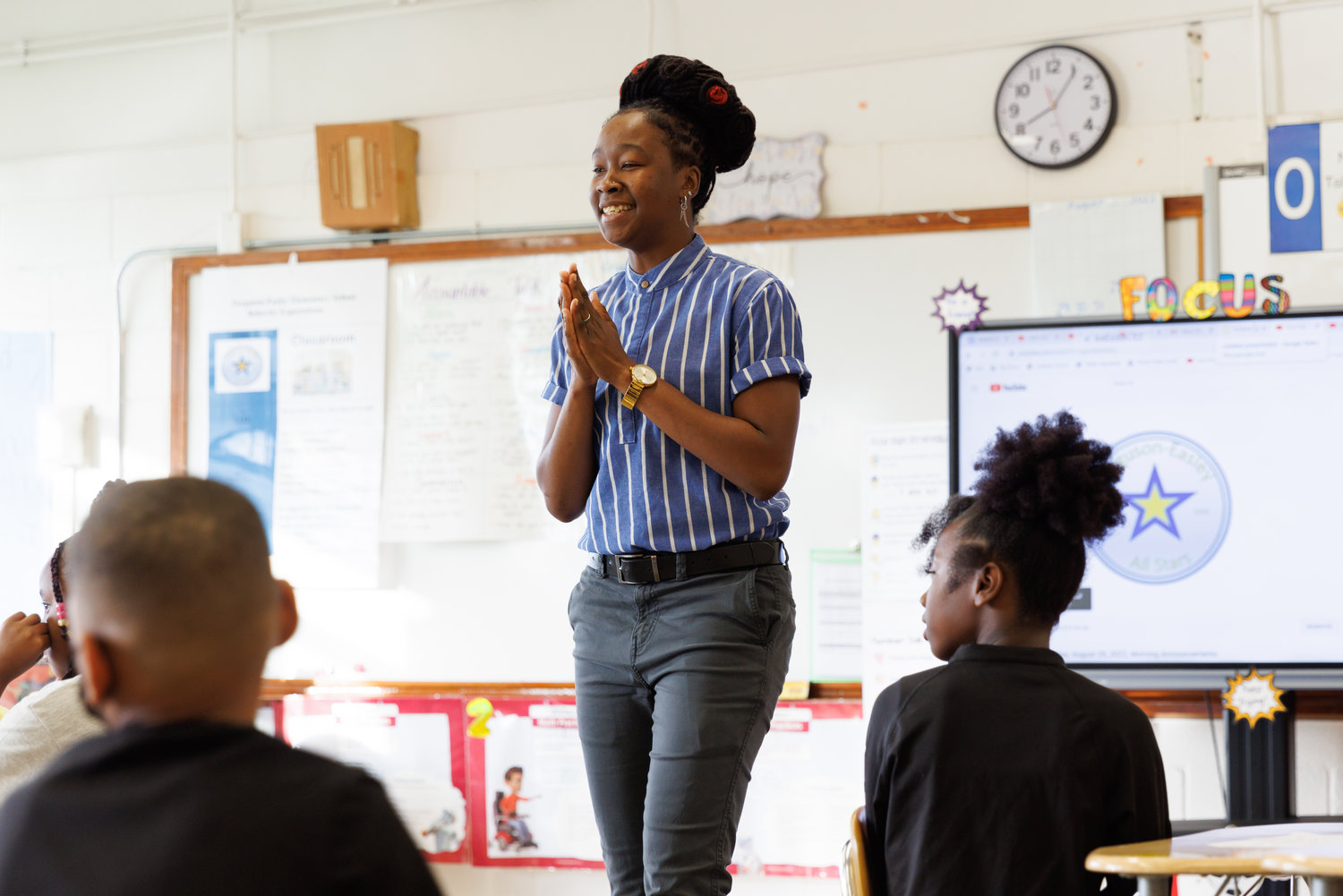 We’re coming back with a passion. And we have a purpose. People, purpose and passion.”
Marvin Connelly Jr., superintendent of Cumberland County Schools
By Michael Futch | Staff writer

Ten-year-old Brianna was a bit uneasy about the first day of school Monday.

Not only was it the start of a new school year, but she also was new to Ferguson-Easley Elementary and to classes in North Carolina.

Brianna was one of 50,120 students returning to school Monday, the first day of class for those on the traditional calendar.

Photos of the first day of class

Ferguson-Easley is one of the district’s 86 public schools.

“It’s an exciting day here in Cumberland County,” Superintendent Marvin Connelly Jr. said from the front of Ferguson-Easley. “School is back in session, and the wheels on the bus are going round and round.”

“We’re coming back with a passion,” he said. “And we have a purpose. People, purpose and passion.”

Connelly said the goal this school year “is learning, recovery, as we continue to recover from the pandemic and social and emotional wellness. All our students and staff.”

He described the process as continuing “to recover from the loss of learning through the pandemic.”

Teachers and other staff trickled in early. Parents and their children soon followed as the clock approached the 7:45 a.m. start time.

A half–hour earlier, parents and caregivers were able to begin dropping off the students.

As the children reached the entrance, they were urged to walk through a line of welcoming guests. They included members of the Kindah Temple No. 62, an ensemble of Omega Psi Phi Fraternity members, including Fayetteville City Councilman D.J. Haire; music teacher Erin Fossa and Jessica Alaniz, an instructional teacher.

While the teachers provided the occasional hug, the men gave the students fist bumps and open palms for a high-five. They listened to Prince and Elton John as they whooped it up in support of the students and staff.

“Little man,” one of the welcomers uttered to a small boy.

‘Hey, little guy,” another one said to the student.

“Come on through” and “Have a good day” also greeted the youngster.

After making it through the greeting line, another boy pumped his arms like a boxer — jazzed by the moment.

Principal Eric McLaurin, who is starting his third year in charge of the 63-year-old school, also stood outside and helped direct vehicles that passed through the front drive.

He said this is the first full year of all the students from Ferguson-Easley and the former T.C. Berrien being placed together.

“We’re able to actually see their faces. Now we’re able to see all those smiling faces," McLaurin said. "All the parents and students who showed up — they were excited, and they’re looking forward to being on campus.”

In March, the Cumberland County Board of Education voted to close T.C. Berrien. The 178 students who attended that school were divided between Ferguson-Easley and Lucile Souders elementary schools for this school year.

As one father escorted his son into Ferguson-Easley, he could be heard telling the boy, “I know they closed your school. This is your new school.”

Fifth-grade math teacher Briana Smith admitted that she was nervous about coming back to work on Monday.

"Once I got here," she said, "my teacher superpowers started kicking in. I saw my first kids, and I settled down. Teachers can be a little nervous on the first day of school, too."

Yvonne Morrison, 38, said she was thrilled that the first day of school had arrived for her 9-year-old daughter, Laila West. This is Laila’s first year at Ferguson-Easley as she previously attended Morganton Road Elementary School.

“It was a rough two years for them,” Morrison said of students who have gone through public education during the COVID-19 crisis. “I’m excited to get them back in the classroom.”

Laila said she was happy to be back around a lot of her friends.

“For us to be successful,” McLaurin said, “everyone has to have (involvement). Not just the administration and the teachers, but also the students and the parents. Those are things we discussed during Thursday open house. We know for Ferguson-Easley to be successful, it will take the entire community to come together and bring up those scores.”