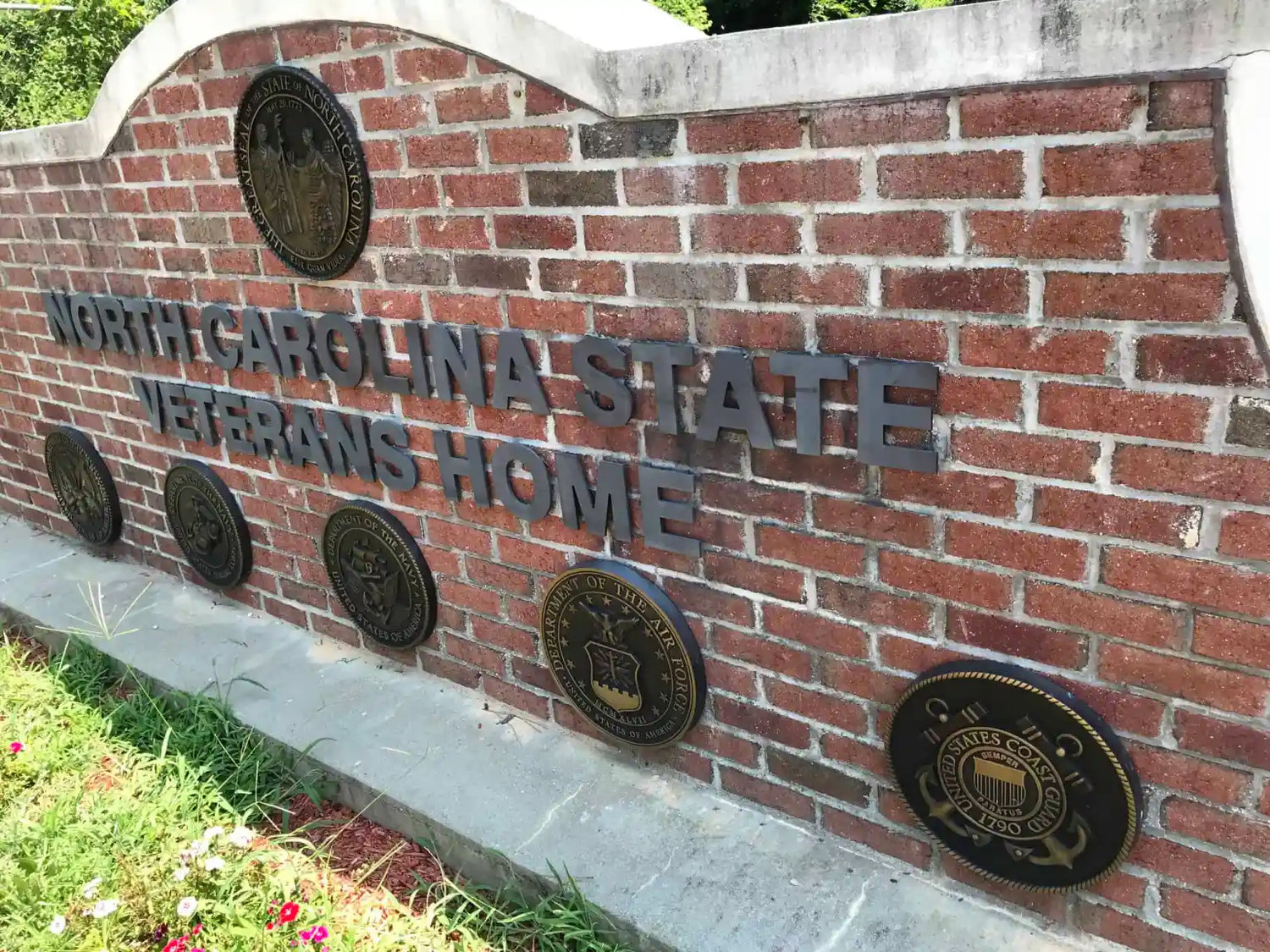 The North Carolina State Veterans Nursing Home in Fayetteville displays icons of the U.S. military branches of service. The facility went through a COVID-19 outbreak that killed 20 veterans who were living there.
Photo by Greg Barnes
Posted Saturday, July 23, 2022 5:21 am
By Thomas Goldsmith | North Carolina Health News

Until they heard from Gov. Roy Cooper, the state Division of Military and Veterans Affairs slow-walked directives and missed legislative deadlines to look into the state veterans nursing home system and to report regularly on their progress, state records show.

Provisions in the state budget bill passed last winter directed the division to “conduct an assessment of the long-term care needs of the State’s veterans and to develop a plan to address those needs.” Recently, after questions from North Carolina Health News, the governor’s office reached out to DMVA to ask why mandated reports are missing and told them they should get them done.

The budget signed into law Nov. 18, 2021 required reports to be delivered Feb. 1 and April 1 to three legislative committees and the General Assembly’s Division of Fiscal Research. The budget also appropriated $250,000 for the study.

In addition, DMVA was told to ask for proposals, receive applications, and engage an independent consultant to carry out the work of assessing in detail the strengths and weaknesses of the veterans health care operations and recommending new approaches if needed.

None of the requirements had been completed when this reporter reached the division June 24, and officials have since maintained that they can meet the goals and save money by substituting information from several federal reports that have little connection to the topic. On July 2, a division spokeswoman said that reports supplied to North Carolina Health News in response to our query were meant only to give an idea about developments to come in long-term care.

"Information on the needs facing long-term care facilities is important to ensuring quality care and DMVA will provide you an update on this process,” Cooper spokesman Jordan Monaghan wrote in an email to North Carolina Health News. “The Governor expects agencies to work diligently to meet deadlines."

NC Health News has run a series of stories since 2020 on the COVID-related deaths and the management company’s decision not to release full details of how the infections and deaths occurred.

The legislature told DMVA in the budget provisions to acknowledge that veterans require broader and more complex care than “traditional, institutional-based system of care.” In addition the law says that pre- and post-Gulf War veterans have different requirements, and that the existing state-owned nursing homes should be incorporated into a “larger long-term system of care to meet the needs of veterans in both rural and urban areas.”

On June 24, the day after Cooper made his expectation known, DMVA sent two  documents to NC Health News in an effort to support the way officials have handled the directions sent by legislators.

One was a federal Veterans Administration report that looked at health care for veterans mostly in the system of large hospitals run by that agency. A second federal report outlined a VA proposal on a possible realignment of hospitals and health care services for veterans in parts of Virginia and North Carolina.

There seemed to be little direct link between the reports sent by the agency and those that legislators ordered DMVA and DHSS to carry out.

“We are analyzing and evaluating this recently prepared report to discern any gaps that North Carolina may need to study,” DMVA spokeswoman Tammy Martin said in an email. “Our efforts should complement the VA in their future endeavors. To avoid redundancy, the monies appropriated to DMVA have not been expended.”

DMVA described its decision not to spend the $250,000 allocated with the directed tasks as “performing our due diligence on behalf of N.C. taxpayers.”

Martin wrote: “The direction described in the bodies of the (federal) report will serve as the basis of our recommendations towards addressing the long-term care needs of veterans proudly calling North Carolina home.”

Then, responding July 2 to questions about the federal reports, the division spokeswoman offered another change of direction.

“The VA reports I sent earlier are not intended to replace the DMVA report,” Martin wrote. “While it is not NC specific, it does indicate the direction of future care facilities.”

On the same day as Cooper’s response, a newly hired Martin had provided the first agency response to a reporter’s query. That was 10 days after a request for information went initially to Terry Westbrook, DMVA assistant secretary of veterans affairs, who did not respond.

“At this point, the reports have been delayed and are not complete,” Martin wrote in an email. “NC DMVA continues to work diligently for our military and veteran populations with care and compassion.”

The state Department of Health and Human Services was also tasked under statute with working with the DMVA on the survey of the veterans nursing homes system. When there’s a complaint about a nursing home, the state DHHS essentially becomes a local arm of the federal regulatory body. Someone from DHHS, or a local county, inspects nursing homes, which are ultimately regulated by the federal government.

In this role, DHHS is designated under the law to take part in the survey for which the $250,000 in non-recurring taxpayer dollars were appropriated.

“In response to your inquiry concerning the $250,000 – it remains unspent as the departments continue to work together to ensure it is spent with efficiency,” Martin wrote.

‘Looking about 20 years out’

Westbrook talked about a longer-term assessment of the veterans nursing home system when he addressed a meeting of the North Carolina Coalition on Aging on March 25. The meeting occurred nearly two months after the agency’s first missed deadline and one week before the second report to the General Assembly failed to materialize.

“The state General Assembly tasked us with developing a strategic plan and doing an assessment of the needs of the veterans community as we go forward from here,” Westbrook told the statewide nonprofit group, according to a transcript.  “So we're going to be looking about 20 years out in the future.

Meanwhile, the information that lawmakers wanted to have gathered on the state veterans nursing home system, as designated by statute, covers a wide range of current data. Included are staffing levels in relation to number of residents; average daily number of residents; numbers of beds; demographics of residents including gender, race, and age; satisfaction surveys; length of waiting lists, daily rates sorted based on responsible parties; costs to the state; and the “number of admissions, discharges, and deaths.”

This article first appeared on North Carolina Health News and is republished here under a Creative Commons license.